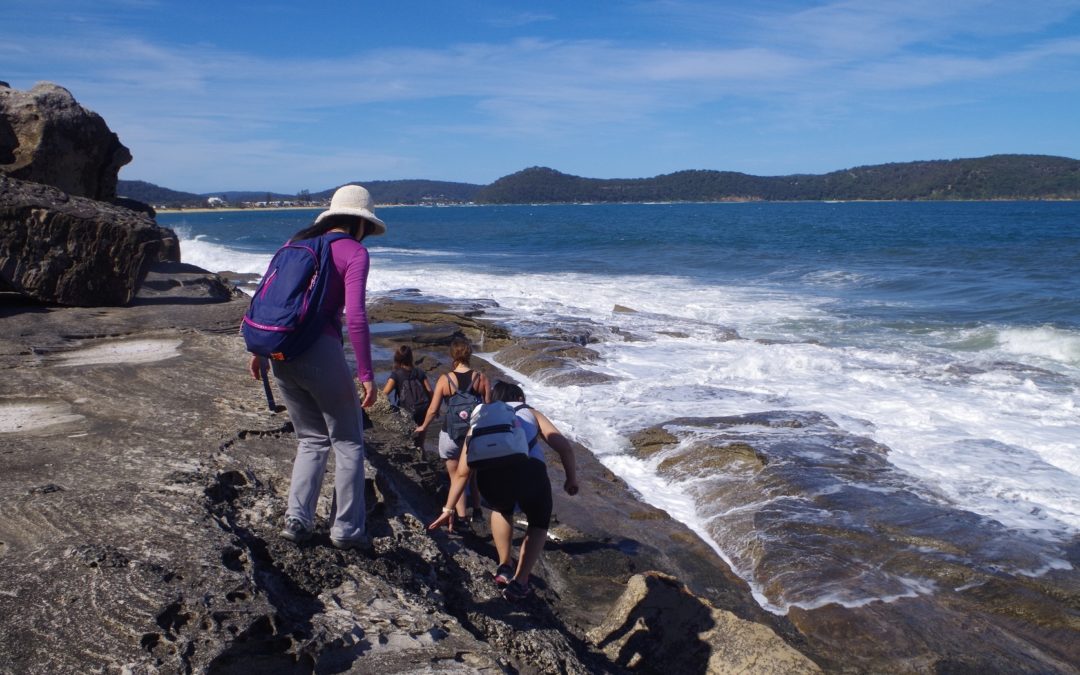 We all met up at Woy Woy Station and then proceeded in Matthew’s car and my car for the 15 minute trip to the south end of Umina Beach. At the parking spot we were greeted by a male Bush Turkey. As it was becoming a nice day there were already plenty of people at the beach. Then it was rock-hopping around the southern end until reaching the rock platform below Mt Ettalong. As there was a rising tide, we had to climb a bit higher than normal, and also exit up the cliff earlier to the track which runs between the road and the north end of Pearl Beach. Then it was a stroll along the beach, noting the presence of mineral sands. At one place a wave washed in a fair distance forming a shallow pool, resulting in bubbles coming from under the sands, no doubt the homes of crustaceans thankful for the water. We stopped at the Crommelin Arboretum for morning tea, and were visited by a Magpie and a Kookaburra. Then it was off along the Patonga fire trail which winds its way up the hill. Just as we started we noticed what appeared at first to be a Bush Turkey scratching at the base of a tree, but on closer inspection turned out to be a male Lyrebird. It didn’t seem too worried by our presence. We stopped at Warrah Lookout for the view over Barrenjoey and Palm Beach. Then we dropped down the fairly steep track to Patonga, and lunch at the seafood cafe. (The track at this point is a part of the Great North Walk). There is no swimming at Patonga as it is an estuarine beach which has a risk of sharks. After lunch we returned back up the steep track to the fire trail and then dropped back down to Pearl Beach, where Matthew, Cathie, Marte and Sara had a swim. The water was quite cold – normal for this time of year. Still, Marte from Norway said it was as good as it gets there, so she didn’t mind.

After the swim it was time to return to Umina and the cars. the tide was going out but even so the waves were still just lapping the edge of the rock platform when we returned to it. The alternate route to Umina would have been a road bash along Mt Ettalong Road – no footpath, narrow road, lots of traffic. Not safe. The rock platform was preferable if possible. So, after careful observation of the waves it was deemed safe to cross over a narrower part of the platform, but even so one wave larger than the rest pushed some water across the the platform just as Joyce an Linjing were crossing, and the water just lapped at their feet. They got across safely. (We were not as close to the edge as the last photo might suggest). Just goes to show you can’t be too careful on coastal seaside rock platforms, and never go right to the edge! Then it was back to the cars and back to Woy Woy Station for the 4.23pm train to Sydney for the train people.

It was a good sunny day, not too warm (22 degrees) and just warm enough for a swim even if the water was a bit cold.
And there were no “no shows”, either!