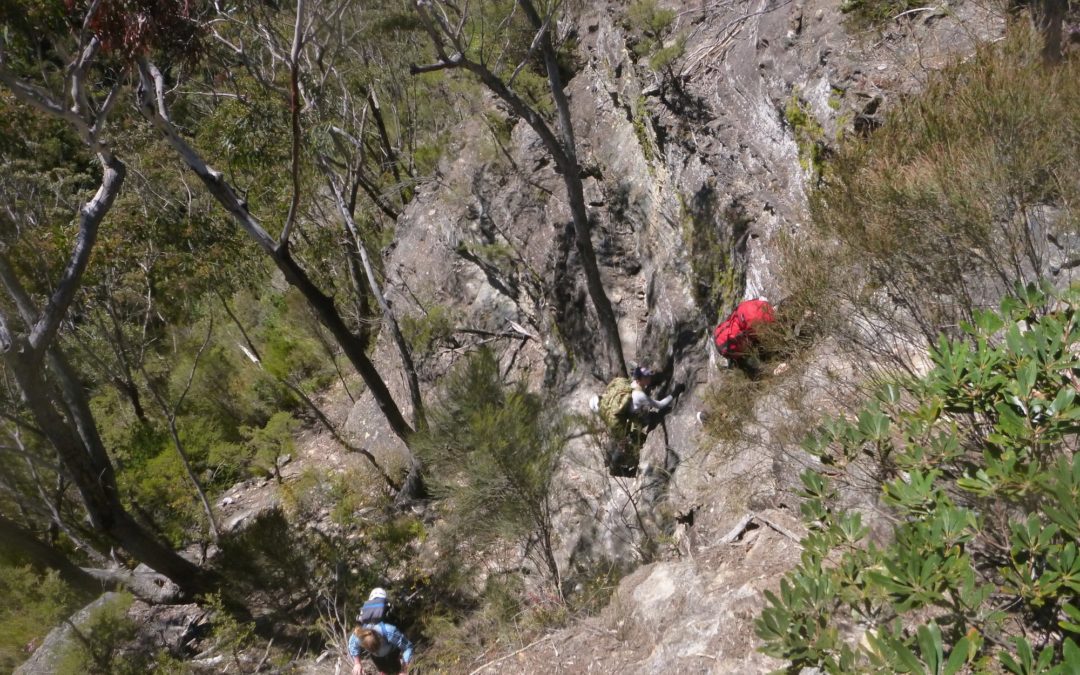 We met at Richmond McDonalds just after 6:30am. Clint arrived after me followed by Mani who recognised me from the usual canyon attire I was wearing of thermals that had holes everywhere on them from the amount of off track walking on canyon trips. Saskia and Tony came with Meridy.

We carpooled into Meridy’s and Mani’s cars and upon arriving at the usual parking area for Hobnail got out of the car to a strong chilly wind and were contemplating the idea of why we decided we were going to do a wet canyon on a day like this nevertheless we pushed on regardless.

Mani and Tony had both brought their GPS units for assisted navigation so we could find the easier route into the canyon. I originally thought the easier entry would be at the first bend of the firetrail where you get the first expansive view of the canyon system but that area was too steep.

We went into the thick scrub checking with the GPS where the less steep ground was and eventually found our descent through a dry watercourse with us sliding our way down.

This route bypasses through the cliff faces that is described in Rick Jameison book as “a short abseil may be needed at the bottom”. In fact there are no abseils in Hobnail at all so if anyone is going there on a future trip there is no need for abseiling gear. There are some blockages with logs and boulders that are in the canyon constriction. This is what Rick Jameison might be referring to in regards for abseiling but we got through them easily by sliding down underneath through the boulders.

Once we descended into the canyon we donned our wetsuits and harnesses (which we later found out were unnecessary harness that is) and proceeded to traverse through the canyon. Best way to describe the Hobnail is two nice but short Canyon constrictions interspersed with 80% of scrub bashing taking several hours to get to the Upper Bowens Junction. Along the way we encountered a crayfish and one member accidentally put their hand on top of what looked like a juvenile tiger snake that was soaking up the sun as it was so well camouflaged they didn’t see it till last minute when it decided it was time to get moving.

We stopped for lunch at the Upper Bowens South canyon junction then explored upstream a short distance of the canyon and headed for our exit track. The proper exit is up a series of rock ledges, there is a log to help people to get up onto the first ledge. We also found a very clear foot pad much earlier on then our proper exit. A lot of people have been using this exit which is the incorrect one and if people keep using it will erode away the soil so if anyone goes there in the future go up the proper exit past the incorrect dirt track exit that you will see coming in on your right.

We took a short detour to check out the zip line and contemplated how safe it would be to use before climbing our way out on the track using the fixed ropes in place and back to the cars.