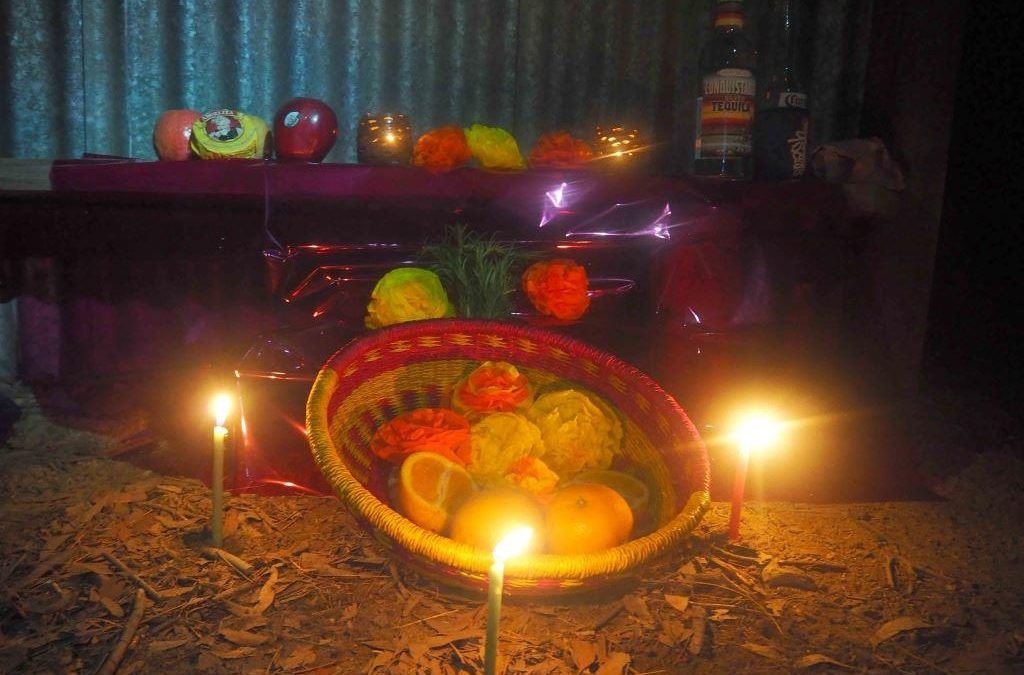 Forget Halloween – this trip was SUBW with culture! This year we were keen to abandon Halloween and instead celebrate the Mexican celebration of Día de Muertos (Day of the Dead) near a bush cemetery and when the opportunity arose we jumped in.

After a few last-minute drop-outs four of us headed to the Blue Mountains to enjoy a relaxing weekend of hiking and camping. It was a rainy start to the weekend and soon followed by broken-down trains and traffic jams but all was eventually sorted and we headed off from Mt Victoria station at about 2 pm. It was still raining as we lost the tar and headed into the bush – keen for some short adventures before camp.

So what do you do in the Mountains when it’s raining? You go underground of course! We were soon off down a short bush track to visit the first of two abandoned coal mines. The bush was splendid after the recent bushfires and masses of Waratahs lined our descent along the old mine railway track. This Blair Athol Coal Mine (one of four with the name) was one of the longest we have seen in the mountains – about 300 metres – and sloped downwards at an angle of about 20 degrees.  At the end we hit water but could see the mine continued for some way further. We’re told that cave diving has been attempted here but that it was not a pleasant trip. Surprisingly there were no microbats or glow worms in this shaft although the shaft was pitch black.

By the time we had returned to the cars the rain had subsided somewhat and we headed off for a longer walk at Asgard Swamp. The swamp itself was looking healthier than previous years and there were plenty of frogs and dragonflies around. The area was clearly of considerable significance to Aboriginal people and we noticed some art on the sandstone as well as chert flakes and other signs of tool making. Further along we saw more quantities of stone flakes and even a large fist-sized piece of stone from which tools had been flaked. We made sure the stones were hidden and left undisturbed.

We then headed back to the track toward the more well-known of the Blair Athol mines. The trails in this area have shifted after the bushfires and with some misnavigation we arrived instead at a spectacular lookout overlooking the Grose Valley. Some photography ensured all the while enjoying the magic play of the mist as it rose from the valley below. We then headed back (on the correct track this time) to check out the mine. Having explored the first mine this one was rather small and uninspiring however the large coke ovens nearby were well worth the visit. By the time we finished here it was getting dark so we headed back to camp.

While we set up tents Laura prepared a fantastic display of flowers, candles food and drink for our of Día de Muertos celebration. We were particularly envious for her magical ability to create some very convincing paper flowers in a camp setting (there were unfounded accusations they must have come in a box). We soon had a campfire going nearby and settled in for a night of fun and cultural exchange. With such a great group we only realised the time at 11:45 pm and reluctantly headed back for some sleep. It was a beautiful and calm night; the only exception was when Marty awoke to the call of a local Masked Owl – not the most friendly of bird calls to wake to in the middle of the night for those who have never heard one before! Beside this we all slept sound and unbroken.

Next morning (after a good sleep in) we broke camp for another short day of local exploring. The rain had stopped but in its place was a nagging and persistent wind. A sort drive and hours walk saw us at Victoria Falls in time to enjoy a well-deserved swim before the crowds arrived. While walking back up we passed a couple escorting a group of about 15 young kids for their first bushwalk down to the falls: we didn’t envy them the trip back up.

Before we knew it midday was upon us and we reluctantly headed back for a quick bite at Petaleura Café and our transport back to the Monday grind. To our surprise the town had been painted pink. The morning’s wind had been perfectly timed and the Peach Trees blossoms had dropped en masse to leave a veritable carpet of pink petals over the pavement and road. It was all a bit much for these dirty and weary hikers boots to trample! It proved the perfect backdrop to our final drinks at the Café before necessity called an end to our trip and we headed homeward.

A big thanks to Marty, Eugenia and Laura for a great trip and excellent company. We’re all certainly keen to try this again next year and keep up the tradition!