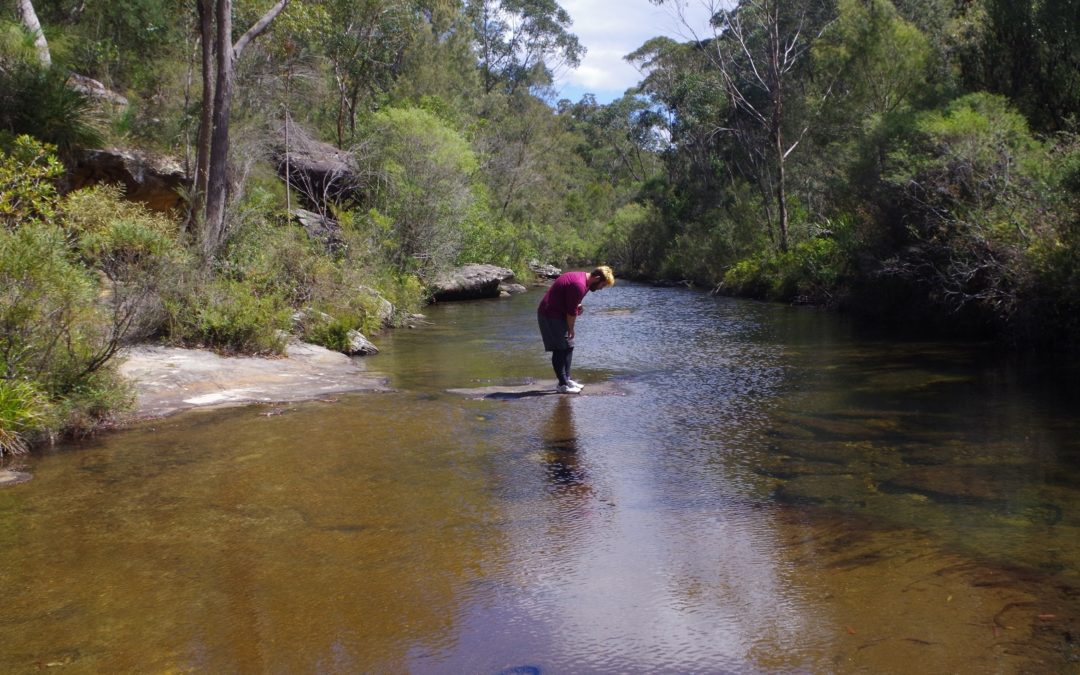 Because the weather was forecast to be a slightly unseasonable 19 Degrees and fine, I decided it was a good chance to go for a walk in the Royal National Park’s interior before summer really set in and it becomes a bot too hot for walking on the tracks which are not near the coast. 12 others thought so too.

But, as the train pulled in to Central I was concerned as only 3 people including me were on the platform. I knew that a couple of others were getting on elsewhere but it looked like there might be a lot of “no shows”. I was relieved then when the whole complement of walkers materialised on Loftus Station when the train arrived there (Cathie, Sergey and Maria had driven straight to the station).

So we went down to the tram stop at Loftus, and as we were there about 10 minutes early, the tram people took us for a free ride towards Sutherland instead of us just standing around (the line doesn’t yet reach Sutherland as the trackwork is incomplete). Then it was off for the 7 minute trip to the National Park entrance which cut out a boring dirt road bash of 45 minutes. From there it was down the “Honeymoon Track” to the weir at Audley. We crossed the weir and then crossed the bridge at the Audley picnic grounds and then it was a 10 minute road bash to the start of the Uloola Track at the Wattle Forest picnic area. This walk was new to me, at least as far as Uloola Falls, and I later found out that it is possible to commence on a branch of this track without having to cross the weir at Audley – still, the way we went was more straightforward. I was a bit concerned though as we still hadn’t reached the track after 10 minutes of walking the narrow bitumen road to Wattle Forest; I wondered if it was the right way but was relieved to see the “Uloola Track” signpost there at the end of the road.

From Wattle Forest the track starts to climb on a moderate gradient but is fairly rocky and not well formed until it reaches the top of the ridge. Then iot continues more or less south, using a series of rock platforms on the way (not unlike the Wondabyne tracks although with smaller rock platforms than there). At one point we came to a large rock shelf with a mini canyon in the middle about 2 metres wide which some of our walkers jumped over. Here there was a good view of the valley of the Hacking River with views south towards Garawarra area. The rock platforms deceived us at one point, however. With Alex and Fabio in front at that stage we followed the apparent way along a platform and reached a track which became more vague as we went along. Eventually it petered out altogether. Obviously a dead end track made by many others making the same mistake! So it was a matter of back-tracking to the rock platform and we found the right track – easily missed as it was a bit overgrown with luxuriant heath at the point. A short way along this track we met other walkers who had started from the Waterfall end (which is where the Uloola track eventually ends up). Along the way we saw a few lizards and a bush cockroach, a larger but harmless version of the domestic variety. Wildflowers were out also.

After about 2 hours or so we reached the junction where the track divides, the left track continuing to Waterfall and the right one to Uloola Falls and eventually Heathcote. We reached the falls and decided that it was a good spot for lunch. Noticed a couple of girls at the base of the falls and wondered how they got down, but decided to let them have that spot to themselves.

After lunch we headed off along the track to Heathcote via Karloo Pools; this track, now called the Karloo Track, I had walked some years ago on a walk organised by Wendy Au, and I recalled that it was almost 30 degrees on that day and walking along the track which is bordered by high heath on a windless day was stifling. So I was glad it was only 19 degrees with a constant brisk cool breeze. At one point it is possible to see a view of the City Centre as well as buildings at Chatswood and Bondi Junction. When we reached Karloo Pools, there were other people there but no one swimming. Maria said that had she known about it she would have been prepared to have a swim – she wasn’t worried about the cool temperature. Alex tried to give the impression he could walk on water on the very shallow part, and the rest of us had a good beak to enjoy the view.

Then it was off on the final track to Heathcote Station (in fact there are two tracks from Karloo Pools to Heathcote -neither well signposted). It was another moderate climb along a rocky track until reaching the houses to the east of the railway. Then it was back to Sydney (or Loftus for Cathie, Sergey and Maria), on the train.

It was a good walk enjoyed by all.

Walks in this interior area can be a bit too hot in summer as the tracks are fringed by high dense Heath which usually block any light breezes and trap the heat.The Coastal tracks are usually OK.