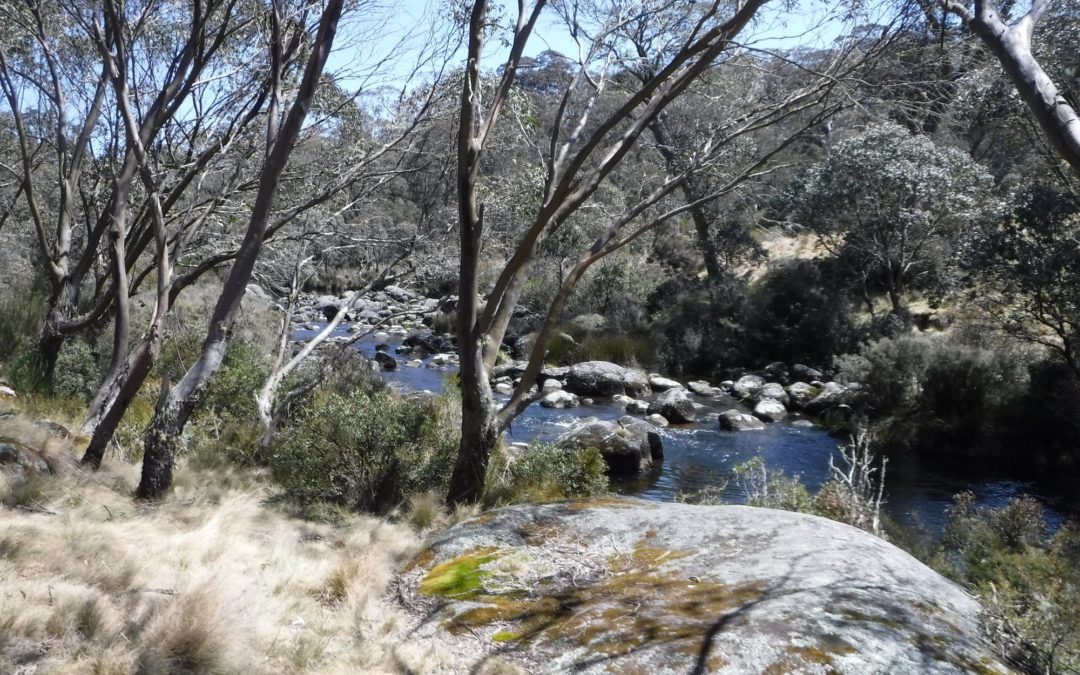 (Not sure if this wins any records for the most belated trip report (!), but I thought I’d write it up anyway).

The plan was to head up the Corker Trail in Barrington Tops National Park, neither of us having been there before, and check out the area. Planning was somewhat belated to say the least – (a few days before), and without finding much information online, it was a matter of a couple of phone calls sharing what information we both could find, then seeing how we went on what was a relatively simple route as far as could be ascertained.

We met at Maitland McDonalds at about 8am on Saturday morning and headed up to Lagoon Pinch picnic area at the base of the Corker Trail, stopping at Dungog on the way for something to eat and some last minute supplies. We then headed off from the carpark around mid-morning starting up the trail which begins with probably the steepest section immediately. The weather was quite cool with a chilly breeze blowing, but it is still a steep climb, and so after an hour or two of walking we stopped at a nice sheltered spot on the side of the hill for lunch. Continuing up again, it was interesting to note the change in vegetation as you ascend the trail. Once the trail reaches higher up it winds around to the western side of the ridge where at one place a small landslip has created an excellent lookout with views out to the west over the valley. Past here it is a gentler slope as the trail passes Corker Mountain and then flattens out somewhat along the top. A little further on, the trail reaches a junction with the track heading to the left going onwards to Careys Peak, whilst straight ahead the trail leads quite quickly down to Wombat Creek, which has a great little camping area and, of course, a creek with excellent water. Peter then recognised the spot, having come in from the other side along the Gloucester Tops trail on a previous trip.

This is where we had decided to camp for the night so we found a good spot and set up for the night. As there still a reasonable amount of daylight left, I decided upon a quick trip out to Careys Peak for a look. Whilst it seems that Wombat Creek is up on the plateau, there is still a reasonable bit of a climb to begin with to get up to Careys Peak. Then it is a relatively flat trail which drops through a small saddle past a hut and then up small climb to the peak. The afternoon views were great, but after a few photos and soaking up the view, I headed back to the campsite before the sun dropped too low, and with it, the temperature!

Back at the campsite, Peter had gotten a good fire going after incessant fanning with his sitting pad for some time which was impressive – the altitude and dampness means most of the timber is poor burning and although we kept the fire burning, the tip would be to collect drier sticks from lower down as you come up the trail, or better still bring a small amount from home. After hanging around and having dinner and some hot soup etc. we eventually retired to our tents as the temperature had dropped down considerably.

Peter I believe slept well in his hammock, but due to a short sleeping mat, I had a somewhat poor sleep due to my feet all but freezing. The wind was howling overhead in the treetops, but the campsite itself seems well protected and wasn’t particularly windy.

The next morning we headed off after breakfast to Careys Peak, having another look around and admiring the amazing view. The edge of the plateau appears as though set out by a gardener as there is such a marked line where the snow gums on the plateau give way to other eucalypts on the slopes leading down into the valleys.

From here we headed back around to Black Swamp on the Aeroplane Hill Track which leads to Junction Pools. It was getting towards lunchtime, so we had a bit to eat. I was keen to see what lay at Junction Pools but Peter had some issues with his boots, so it was agreed I would take a quick run around to Junction Pools whilst Peter chilled out in his hammock. Getting closer to Junction Pools, I started seeing families and people without packs walking, and upon arrival, understood why- it being accessible to vehicles on the other side of the river. It’s a nice spot with a lovely stream running through. So after a quick look, I raced back around to Black Swamp, where we then began the walk back down to the Corker and back to the car. The walk down the Corker is a bit harder on the knees and I was soon wishing I had Peter’s trekking poles(!) – and made do with some sticks as a substitute.

Back at the car we had a relaxing trip back to civilisation, having had a great trip and found another area which warrants further exploration. Wombat Creek in itself is a definite recommendation as a great little campground which is perfect for a relaxing overnight trip.