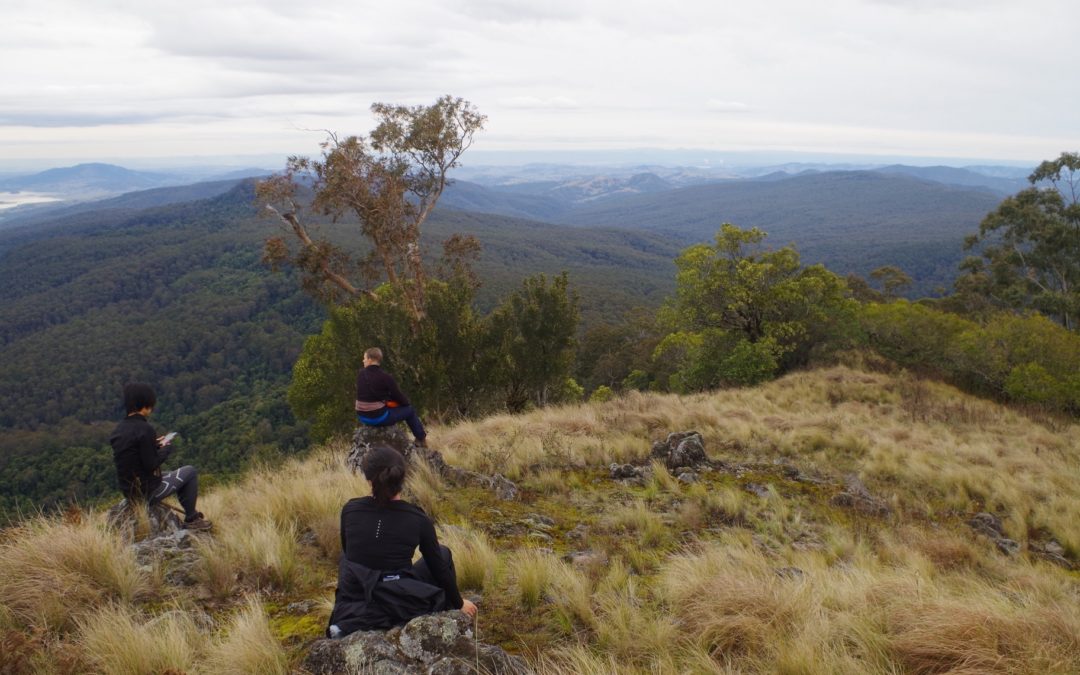 After meeting up at Woy Woy Station we set off for the run to Singleton via the M1 and Hunter Expressway. After a stop at Singleton Maccas for a quick lunch we then proceeded along the road to Mt Royal NP which skirts Lake St Clair on the left. The dirt section road appears to have been improved since the last time I was there 10 years ago as the deep ruts have been removed.

We drove straight to the base of Mt Royal (which is also where the track to Mt Carrow starts), and then took off up the ridge. This is in fairly open woodland and Lomandra and tussock grass for about two-thirds of the way up, but it is quite steep (the photos don’t do it justice). The base of Mt Royal is about 860m elevation and Mt Royal is 1185m, and the distance between the two is about 1.5km but that also includes a fairly level section of about 500 metres near the summit. And that makes it about an average grade of 1 in 2.5 for the first 800 metres! There are tracks up the ridge – sort of tracks, which are not necessarily made by people, as wombats and wild pigs are known to inhabit this park.

The views afforded in the open sections near the top make the climb well worth it. The views extend to Mt Yengo in the south and the Liverpool Ranges in the north West. It gives a good view of Mt Carrow across the valley of Carrow Brook. The cooling towers of the power stations at Liddell and Bayswater can however be seen in the distance.

Once near the top a knife edge has to be negotiated which is not too bad but the rocks are mossy and slippery so care is needed. Then a mossy forest is encountered which reminded us of “Lord of the Rings” – half expected to see Gandalf appear. Then some meandering through fairly thick and at times prickly scrub is needed until reaching the trig point marking the summit. There is a log book there which I filled out on behalf of SUBW. It was rather damp despite someone having enclosed it in sealable plastic bags. There is no view from the actual summit as it is covered by thick scrub and small trees. We then discussed continuing north to descend the mount via the northern ridge which would return us to the road, and so commenced north but soon found it hard going in dense scrub. Curiously the scrub became less dense once the slopes at the sides of the ridge became steeper, seeming to beckon us the the steep slope, but we avoided the temptation and tried to keep to the ridge top, which is not easy. The remains of old Bush Turkey nests were noted near the summit. Eventually we came to some Grass Trees with the way ahead looking still through thick scrub across a saddle, and noting that it was already 3pm, there were concerns about getting back to the proposed campsite before dark, as the way down via the north ridge was 3km, then another 3km along the road. Therefore a decision was made to turn back and return the way we came.

As we made our way back down the slope, I noticed a tree with a very large slither taken out of its side, suggesting it has been hit by lightning in the recent past (see photo). As the slope got steeper there was one point where – as it dipped down – the bottom couldn’t be seen. I though: how did we manage to climb up that? Stil, we went down and eventually reached the car. Then it was a 2km drive to Youngville camp site, where we found a couple from Newcastle had arrived in their 4WD and were in the process of setting up a camp fire. The guy invited us to share the camp fire. As various websites state that Youngville camp is BYO fire wood, I had brought along three large chook food bags full of wood from my yard, to add to the pile of smaller wood that the man had collected nearby (he had also got a larger log from a cut off from a fallen tree which NPWS had cleared from the road). I decided that we were definitely going to ensure that all the wood was burnt that night. It reminded me of the bet that Ashley had made with Ben Pullicin about burning all the wood that Ashley had collected for a campfire on a navigation trip (see Ashley’s trip report in the May 2012 SUBW archive).

So tents were raised, dinner cooked, and we sat round the campfire, with the now empty chook food bags making handy seats over the damp ground. We also admired the full moon with illuminated the campsite and the tall trees. Rain had been forecast for the Sunday, but all we got overnight was a few drops of rain. I was awakened though by a Powerful Owl calling in a nearby tree, with its loud HOOT HOOT. No one else heard it, so they must have had a good sleep.

Next morning it was overcast and a few more spots of rain came, but the camp fire had survived the night- just. The girls got a cooking fire going again, and we struck camp. Then Dean arrived for the Sunday walk to Carrow Brook. We said goodbye to the couple who were looking after the fire, and set off down the track to Carrow Brook. This track is not as bad as has been described on some blogs; it is well defined and not too much overgrown, although some detours around fallen trees occur now and then. It drops down on a continual grade, slippery at places where it is clay underfoot. Thankfully the occasional rain had stopped just as we were about 10 minutes into the walk, and in fact didn’t return until we had finished this walk. At one place we walked through a grove of Stinging Tree saplings. These are not to be touched under any circumstance, as the hairs give a nasty burning sting which can last for days. This means that long pants and long sleeves are mandatory for this track. Eventually we arrived at Mulgowrie creek, a tributary of Carrow Brook, and were surprised to find a picnic table there! The creek has fairly shallow pools, exactly where Platypus could be expected to be seen. Dean went up the stream a bit for a brief explore but no Platypuses were seen. Probably wrong time of day.

A couple of leeches were spotted trying to get on board but they were brushed off, and no one as far as I know got leeches. (A precaution at the start with spraying socks with insect repellent no doubt helped). The photos show how very dense the vegetation is at the creek banks, with vines festooned everywhere.

The “map” on the NPWS signboard back at Youngville Camp indicated that this was a loop track, implying that the return track followed the creek. We could not see any sign of a track along the creek so we decided simply to go back the way we came. About 150 metres along though, Pierrette noted a track to the right at 45 degrees (easy to miss on the way down), which could lead somewhere. We followed it and about 250m further on came across wooden steps which indicated that it was indeed the return track. This track continued up and up through less dense vegetation than the track going down, and also no Stinging trees!

After what seemed a never-ending climb we eventually arrived back at the camp. This track is about 6.3km return (according to Pierrette’s app) and goes from 850m elevation at Youngville Camp to about 350m elevation at the creek. So less than half as steep a climbing Mt Royal, but much longer distance. It took 3 hours.

So back at Camp, we had lunch, using the shelters there as the rain had started again once we returned from the walk, and the remaining water from the jerrycan I had brought along was used to put out the fire (the other couple from Newcastle had already left).

Then it was back to Singleton, with Pierrette looking out for kangaroos in the farm paddocks – she saw a few. Unfortunately once on the M1 Motorway we encountered fairly heavy rain which played havoc with the traffic, causing the trip to be 30 minutes longer to Woy Woy than it should have been. I got Pierrette, Xiaoying and Zhen at Woy Woy with 15 minutes to spare before the 5.23pm train (unfortunately having missed the 5pm train because of the delays on the M1).

This was a great walk in a seldom visited area – which is partly World Heritage listed, and we were lucky with the weather. A bit cloudy and mild on Saturday, and no rain on the actual walk on Sunday. It is worth a revisit in future, with a whole day allocated to climbing Mt Royal on it’s North side and descending on its (steeper) south. Also, a visit to Royal Brook, to the east of Mt Carrow.