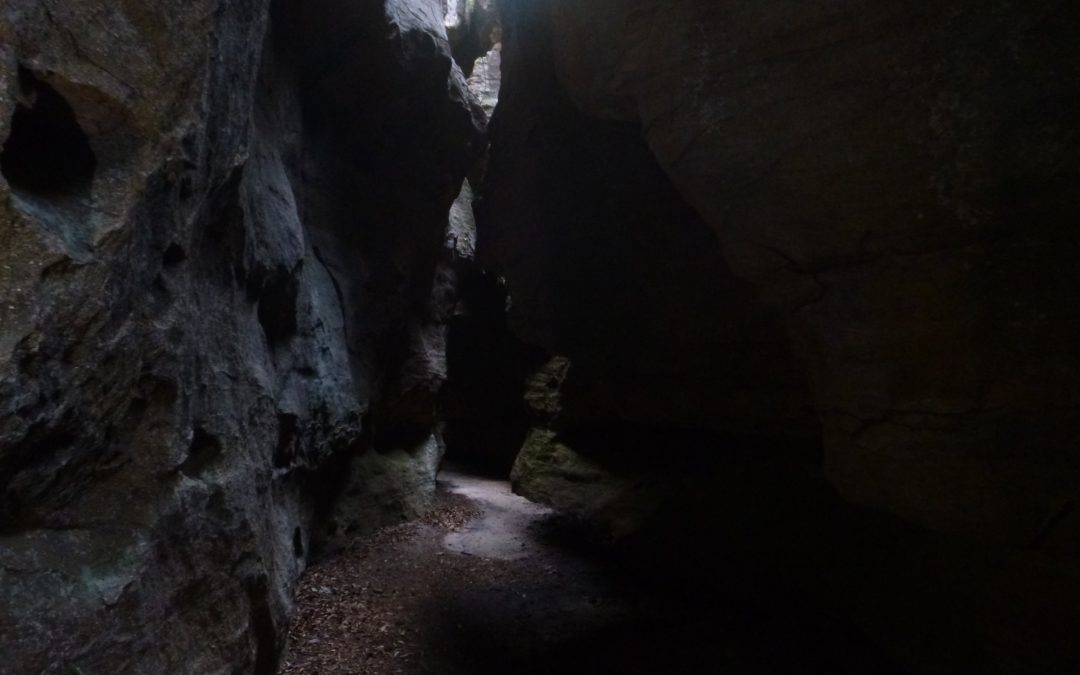 I originally had the trip planned for Saturday 10th September but decided to change it to Sunday as the weather forecast looked more promising. We all met around 7:40am at Bell station, Andreas and Niels caught a lift from the city with Meridy in her pathfinder. Natalie car pooled with me in my jimny from Bell station which she drove to in a 2wd. Since myself and Meridy both had 4wds we decided it would be safer to take them through the newnes state forest roads.

It took us just on one hour to reach the tigersnake carpark where we sorted out the gear we would need. After about half an hour of walking on the open firetrail we came to the distinctive rock outcrop that leads into Penrose Gully. We stopped for a snack break and I gave everyone an abseil refresher training on a short rock slab with Natalie bottom belaying and demonstrating the importance of the bottom belay technique. Andreas and Niels used hydrobots whilst Meridy was using an ATC at first but it took using a bit of force for Meridy to abseil smoothly so she opted for the traditional figure of eight which made things more easier. We left our large packs on the rock outcrop taking daypacks that we distributed safety & food items amongst and took turns wearing rope backpacks from the 40m and 60m 9mm static ropes I brought for us to use.

After the training we continued down into the headwaters of the gully until we reached the canyon proper when I came right on top of it at the narrow part and realised we had to go around to the side to get in so we retraced our steps and spread out to find the entry abseil. Meridy had a good eye for detail and found the red dyneema sling anchor that I missed at first. I self belayed the short drop using my Petzl Shunt and hydrobot setup and bottom belayed everyone else coming down. Not far from the first abseil is the second tight abseil that you can’t do with a pack on. You basically need to lower your body sideways to get underneath the anchor sling. Then walk along a short ledge for a metre or two until you can turn your body around to a normal abseil position then go straight down the waterfall. Since we had two ropes Natalie tied a rethreaded figure of eight to each pack and lowered them down to me one by one so there was no risk of them getting stuck anywhere.

After the second abseil there were more tight squeezes one even more tighter than the second abseil scraping your chest and back at once to get through and I’m an 82inch waste size so anyone bigger than me would have had some difficulty. Finally we reached the last abseil of around 20 metres that goes directly down a nice waterfall. It was about 1pm at the last abseil that we thought we could hear voices which was most likely Tony lee’s group as they also did Penrose Gully on the same day we were there but they started later than us.

Once everyone was down it was a short walk to the right around the base of the cliffs to our exit slot then we climbed and sidled around a line of pagodas to reach the ridge that led us back to the packs and the cars.

Upon checking the log book the last entry I saw for Penrose was back in May but I assume there would be some canyoners going there not signing in the logbook.

Since we got back to cars at 3pm a decision was made to go through the easy walk through canyon Wolgan’s View. Upon reaching the end of the canyon there are some great views of the Wolgan Valley with Donkey Mountain directly ahead. Natalie found a geocache in the area with the last entry being a SUBW member.

After Wolgan’s View we then made our way out of the forest dropping Natalie back at Bell and the rest of us had dinner at Blackheath Fish and chips before heading off home.

Thankyou to everyone on the trip for assisting me and working together to make the day safe and enjoyable.

Here is a link to the photos from the trip: https://flic.kr/s/aHskGBrCoq