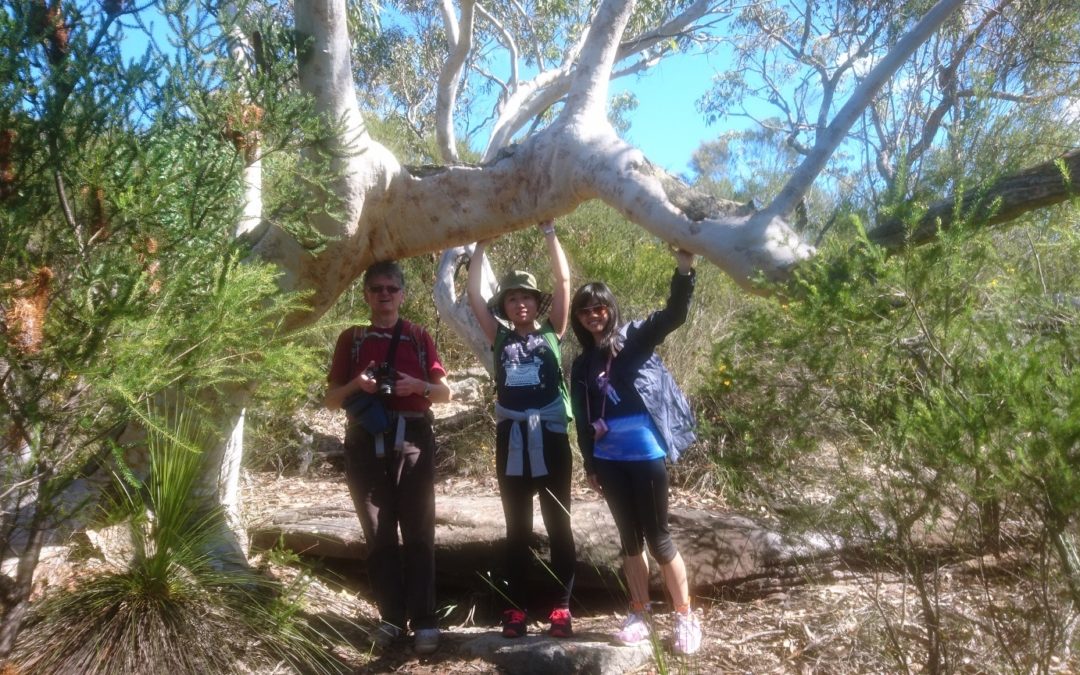 Despite the short notice, and weather forecast earlier in the week I managed to get 6 people on this walk. We all got together off the train at Wondabyne Station, with Maj-Britt meeting on the train by chance another walker doing the section from Wondabyne to Girrakool. We then set off up the steep grade to the top of the ridge where the track then widened and became a much more gradual climb. I had told people that the wildflowers would be out and they were not disappointed. As the photos show there were a large variety wildflowers everywhere.

After a couple of km (2.5 according to the sign) we then set off along the narrower track to Myron Brook and then Kariong Falls. Along the way the track passes a hanging swamp where I hoped to see some carnivorous plants, but none were out – probably too early in the season. This track has been eroded by several heavy rain events in recent years, and at a couple of points the track simply looks like a pile of boulders. It also drops down fairly steeply to Myron Brook – which of course meant a hard upward slog on the return journey.

We stopped only very briefly at Myron Brook as it is one place were you can get leeches, and then continued to Kariong Falls. These falls were running very well after the heavy rain in the area 2 days previously. (By the way there is a Scout camp further upstream so probably not best to drink the water). Also, the little sandy beach normally at the Falls was under water, so that eliminated it as a morning tea stop.

Then it was aanother climb up to the top of the next ridge, where we had a morning tea break. Then on to the junction with the fire trail from Staples Lookout; from there the track follows another fire trail for about 2km until a branch goes off through the heathland, crossing some large rock shelves along the way. There are Aboriginal tool sharpening grooves on one of these (see photo). The track was also much more waterlogged than usual after the recent rain.

Eventually this track reached a railway access road which we followed for about 500m until reaching the track which leads to Mt Wondabyne (and also eventually to Patonga). This track is fairly stony and rises on a moderate grade. Along this track we saw the only reptiles – 2 skinks. A side track took us to the top of Mt Wondabyne with its trig. Here we had lunch among the wildflowers and buzzing bees. Most were European honey bees but there were also some native bees including a big black one. The view from the top extended to the sea in the east and the Blue Mountains in the west.

After lunch we returned the same way, except that Jack left us at the track junction to Staples Lookout, and from there hitched a ride back to Woy Woy Station.

I aimed to get the group back to the junction with the Girrakool track 40 minutes before train time (as that was how long it took on the outbound journey to get there from the Station) and we were right on time. Fortunately it was all downhill from there so it took only a bit more than 30 minutes to reach the station. The timing was fortunate as if we had arrived at the station only 3 minutes before train time, our path across the tracks would have been blocked by the northbound freight train – something to always keep in mind when doing this walk.

Everyone enjoyed this walk which was in good weather.