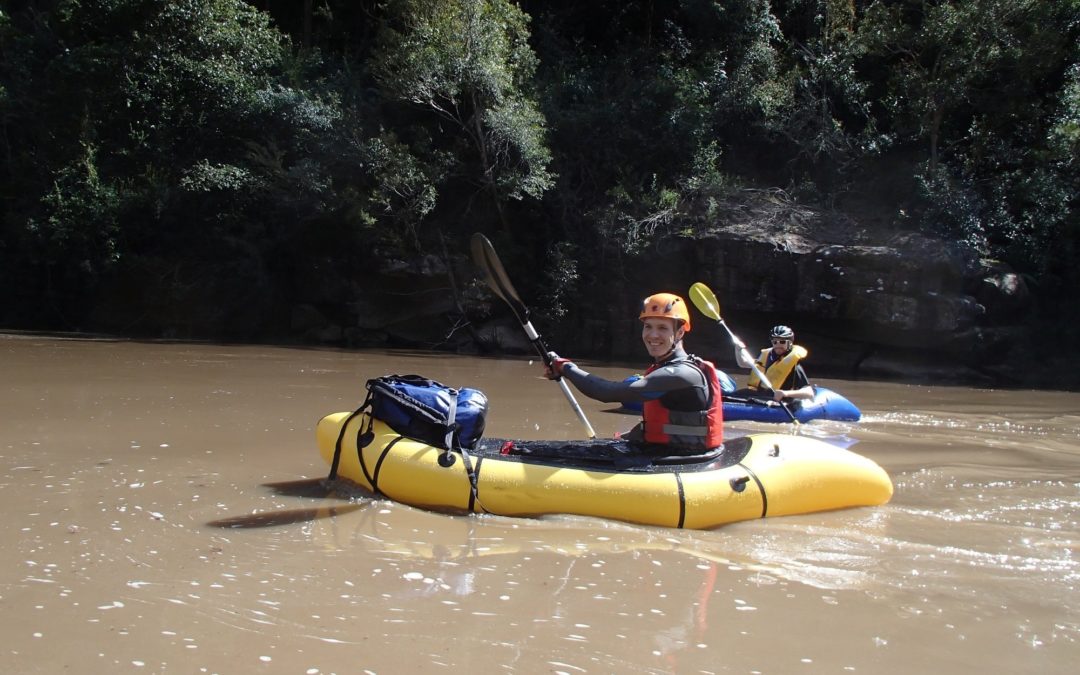 Following Paul successfully organizing a packraft buyers’ club and the arrival of our new toys, a few of us were keen to break in our new gear. While the promised rain arrived over Thursday and Friday, the trip was all but cancelled with the final go-ahead not decided until 5.30am on the morning of the trip. Thankfully the Colo had finally begun to rise late on Saturday evening providing us with a swollen Colo River by Sunday morning for us to enjoy.

We met at the Upper Colo Bridge shortly after 8am where we left one of the cars. The river by this stage was running around 2.6m making the bridge only just passable. For future reference the bridge might begin to flood at a little over 3m.

A leisurely walk down the Bob Turners track (~1hr) took us to the bank of Colo where we setup our rafts. No sooner had we got in our rafts to test them out did we hear voices from the bank on the other side. A group of campers had been stranded on the opposite bank of the river after it had risen overnight. As helpful SUBWers, we ferried a few of them across including their packs before heading on our journey down river.

With the river at around 2.5m to 2.6m at the Upper Colo gauge for our entire trip we had good flow which made for a very easy going trip. The flow was probably 3-4km/hr based on Paul’s readings which meant we were able to move quite quickly and completed the whole 23km paddle including lunch and a break in 4.5hrs. We encountered three rapids, the first of which was the most gnarly. It included a large boulder that we had to avoid getting pinned up on by running as far right as possible. The second rapid we also took a right line while the third we went left and included a nice little fun drop. After the rapids it was a pleasant 15km paddle downstream through the gorge which slowly widens and becomes lined by farms. While we didn’t seem much in the way of wildlife, there were plenty of birds with several sightings of Azure Kingfishers and King Parrots.

A quick beer in Windsor rounded out a great day trip that left us all eager to plan another trip in the not too distant future!

For further background, I thought it worth mentioning a few of the river stats to assist those planning trips in the future. We had 40mm of rain in the Capertee region on Wednesday and Thursday and 30mm of rain in Colo Heights on Thursday and Friday. While the Wolgan, Wollemi, Wollangambe and Capertee all feed into the Colo River, the BOM only has a gauge at the Capertee River. The gauge at the Capertee starting rising at 6pm on Friday night and peaked at 4.8m 21hrs later at 3pm on Saturday. The Colo River took much longer to rise. The Colo showed signs it was beginning to rise at 6pm on Saturday with flow peaking 17hrs later at 11am on Sunday at around 2.6m.

Thanks to Adrian Spragg for his advice on planning this trip.