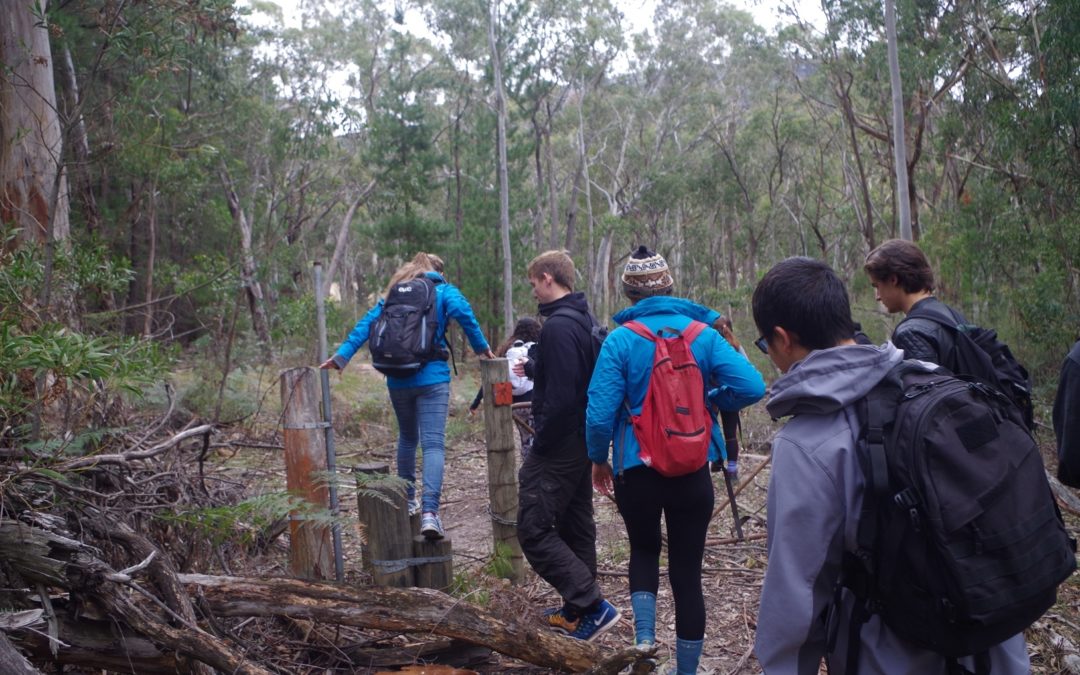 Most of us (except Matthew who went straight to Mt Victoria) met up at Central Station for the over 2 hour trip to Mt Victoria. I made sure that none of Natalie’s Medlow Bath group joined us by mistake. The weather was overcast for most of the day although the sun shone weakly through some cloud breaks near Leura on the way up. The weather was cold but not frosty.

So we arrived at Mt Vic and met up with Matthew there. Then it was a road bash along the Great Western Highway and then about 1km along Mt York Road until we reached the start of Lawson’s Long Alley, constructed in 1823 as the second pass down the western side of the Blue Mountains (the present Victoria Pass is the 5th and latest of the 5 attempts to build a road down the Western escarpment).

Lawson’s Long Alley descends until it reaches a flat floor of Petrolea valley, following Reedy Creek (also called Kerosene Creek) from there on. To avoid going through private property there are bypass tracks skirting the side of the valley. I told the walkers earlier that there was a good chance of seeing wild animals and they were not disappointed. Along this section we say a pair of Wallabies hopping through some flat land, and then a Kangaroo (Eastern Grey) and a Wallaby beside the track on the hillside. They are very well camouflaged – as the photos show it can be difficult to spot them.

Eventually we reached the village of Hartley Vale where we saw a small mob of Wallabies. From there we did a right turn to go north along the road to check out the site of the old Oil Shale works which operated between 1880 and 1913. Almost nothing remains except some mine tailings, and there is a stone cairn commemorating the site. Curiously, although maps and NPWS signage show it to be on Crown Land, there was a locked gate and we noticed a utility parked next to a large tent on the site. There were also sheep grazing there. We didn’t go in. Then it was back down the road southward past the “Comet Inn” to the start of the Cox’s Road track. On the way we saw Alpacas and chooks.

After lunch we set off along the track of Cox’s Road. This was the first of the roads down the escarpment (1815) and although it was a road it is also rather steep. It starts off though fairly level passing near to farmland. At a gate there is a stile which is commonly seen on tracks in England but rare in Australia (see photo). There is also a series of posts in the ground at a couple of places for walking across boggy areas – helps to avoid track erosion. Then the track rose rather steeply to eventually reach the top at Mt York. Along the way there are relics of the original convict working such as bridge footings. The view at Mt York extends out to Hampton on The Jenolan Caves Road. The rain radar showed light rain in that area, but visually it was “Virga”, which is rain (or probably snow in this case) that doesn’t reach the ground.

From Mt York we followed the track which parallels Mt York road but mostly out of sight of it. It eventually crosses the road to reach the Start of Lockyer’s Road, the third attempt of a road down the escarpment. (If you follow Lockyer’s Pass down the hill it eventually reaches our lunch spot near Hartley Vale).

Although not obvious (or signposted) from where the track crosses Mt York Road, the junction with Lockyers Pass and the track back to the start is about 75 metres back from Mt York Road. From there we followed the road on its north side, until reaching the top of Lawson’s Long Alley, so we had now completed the loop. It was on this section that we encountered just a few spots of rain – definitely not enough to make it necessary to put on rain cover. It lasted less that 5 minutes anyway. A check of the rain radar though showed a heavy rain shower just to the east around Blackheath, so we must have had a narrow escape!

Then it was a road bash along Mt York Road to the Highway and then back to the Railway. Along Mt York Road here the blackening of the trees from the 2013 major bushfire is still evident. There was enough time for some of those who wanted a coffee to get one before train time. Then it was back to Sydney. We noticed Natalie’s group waiting on Medlow Bath Station. It was an enjoyable day, made interesting by the sighting of wildlife.

Poor Cathy missed the train at Central “by a minute” she said and called me to ask was it worthwhile getting a taxi to Strathfield to catch the train. In Sydney traffic there is no hope, so I guess we will see Cathy on another walk. There were however two outright “no shows” and no explanation from them. Also, despite someone begging me to include her on the walk – and accepting when a spot came up Saturday afternoon (thus blocking a spot for someone who called me for a spot shortly after), she texted me at 7am – 22 minutes before train time, that she “had homework to do so can’t come”. Well, if you know at 7am you have unfinished homework you should have known that the previous afternoon, so you count as a 0.5 “no show”!

“No shows” need to be aware that you jeopardise your chance of being included on walks that have a high demand.