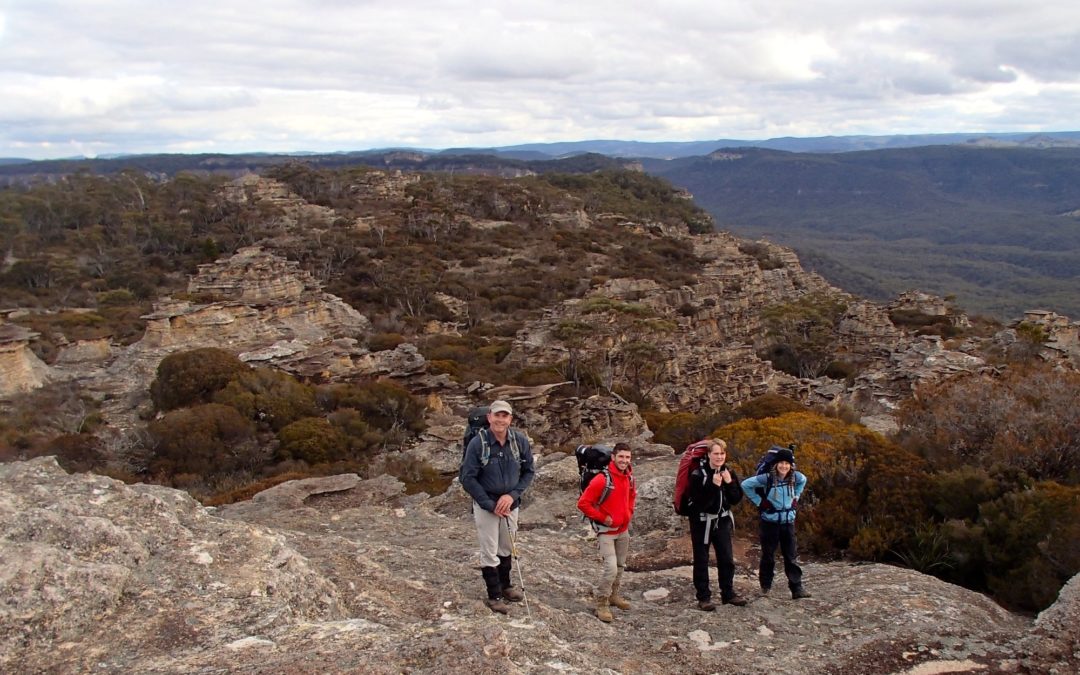 Pantoneys Crown is an isolated massif on the western edge of the Blue Mountains. It stands isolated in the entrance to the Capertee valley, a drum of orange sandstone cliffs standing four hundred metres about the valley floor. It’s impossible to see it without wanting to get on top. Five of us met up in Katoomba on Friday evening, and after a quick dinner drove to Ben Bullen and on to Moffats Trail. There are some steep and rocky descents on the trail, not advisable in the darkness, so we pulled up on a flat hilltop and camped beside the track.

The morning dawned bright and clear. One the advantages of being on the western side of the mountains is the rain shadow effect. While our friends back in Sydney dodged showers all weekend we had a warm and sunny Saturday morning and then a day and a half overcast but without a drop of rain.

Moffats trail is deeply rutted with large rocks and a couple of very steep descents, definitely 4WD only. After a short, fun drive we parked at Baal Bone Gap, from where we could see the Crown at the far end of Crown Creek, We set off at at 08.15, climbing quickly up to the top of the Baal Bone Plateau to find ourselves amongst spectacular wind-carved rock formations and with magnificent views across Crown creek to the cliffs on the other side. A gentle two and a half hours brought us to Baal Bone Point, a high block of rock almost detached from the tip of the plateau, and balanced precariously above the valley. An easy scramble through the cliff and down the point of the ridge to the saddle between the plateau and the crown. Robert was fighting some sort of infection and feeling distinctly crook, and as we reached the plateau he started to get cramps in the major leg muscles – not a good sign with the 350m ascent in front of us. We had a bet both ways on the two current theories of the causes of cramps, dosing with electrolytes and having a vigorous stretching session, before setting off up the Crown.

We were at the cliff line surprisingly soon and stopped for lunch at the bottom of the SW pass. It’s an obvious cleft in the cliffs, about 70m high and with a tree growing precariously half way up. It’s rock all the way – a series of short easy climbs with ledges in between. At one point the wall between two ledges is too high to pass packs, so we got the rope out and pack hauled. The final obstacle is a short chimney where, once again, pack-hauling is needed. At this point Robert’s leg decided to go into a major cramp and he more or less hauled himself up a knotted rope by his arms alone, before collapsing in agony at the top – a magnificent effort. We brewed a cup of tea and had a good long break, and some more electrolytes and stretching!

By the time we got going again it was 14.00. We followed the eastern cliff top, past intricate wind-carved pagodas and admiring the on the other wide of Crown Creek the great opening of the Capertee Valley, Mt Canobla guarding the valley entrance, and the peaks of the Wollemi beyond to the north. Eventually we reached the summit cairn for even finer views, and then dropped to a very pleasant campsite just NE of the summit, arriving about 16.00.

After getting the fire going and setting up tents we went looking for water. It’s a mistake to count on finding any up here, so we had initially planned to carry enough for two days. But after the torrential rain on Wednesday we were confident of finding water either in rock pools on the tops or down in the gullies on the western side. This meant lighter packs. Kate won the competition, with 12.5Kg including 3Kg/Ltr of water, Damon and Paul both managed 14.5Kg, again with 3Kg of water. Marty and Robert both had 19Kg, but for very different reasons. Robert was using equipment from the club’s gear locker – robust but heavy. The source of Marty’s weight became clear as the trip went on and he continued to produce delicious fresh food to share. It was like walking with the magic pudding, and much appreciated! We had a slight hitch when we set out for collect our water – Paul’s Katydyn filter decided this was the moment to break down – the second one to go in 16 years – but the water in rock pools around the summit proved crystal clear and delicious. After a good dinner and a dram of Islay malt around the campfire we made an early night of it and slept soundly through a warm and windless night.

Due to the heavy cloud cover it was still 7C at dawn, a long way from the predicted frost. The sun rose and bathed the pagodas in amazing orange light before disappearing into the clouds not to be seen again that day. We got under way about 8.00 and walked a few hundred meters to the NE pass, which comes in two flavours. One flavor is a reasonably demanding down climb of about 6m whilst the other flavor is a tight squeeze through a small cave. They both give access to the same ledge but about 50m apart. Marty popped down through the cave and appeared behind us a few minutes later having climbed up the other way.  On his recommendation we lowered the packs down the climb and then squeezed the people through the cave – a two-flavour gelato.

From here it’s a steep path with a couple of small down climbs. Just before the base of the cliff there is a detached pinnacle whose summit make a perfect spot for a photograph with panoramic views of the Capertee, of which we took full advantage. We traced the base of the cliffs back to the south for about a kilometer before heading down the very steep but lightly vegetated slope to where we thought we could pick up a ridge leading to the Crown Creek Trail. We stopped for morning tea in a surprising, flat grassy area surrounded by huge boulders that was quite different from any other part of the slopes and would make a delightful campsite.

After tea we set off on a bearing for the nearest point of the trail. It’s interesting country, with dense stands of Calytris, the Australian native cedar that looks as if it should be growing on a hillside above the Mediterranean rather than here, interspersed with eucalypts. But it was quite hard country to navigate, cut up with steep gullies that are an effort to cross despite being to small to show on a topo map. Finally we found ourselves directly above Crown Creek and worked our way down the precipitate final slope to reach the trail at 12.30.  There was running water in Crown Creek, which showed how much rain had fallen on Wednesday as this is extraordinarily dry country and the creek is usually bone dry with any water running well below the surface.

After a short lunch break we marched back up the track to Baal Bone Gap. It’s only 5Km, but with a 300m ascent, almost all of which comes at the end, so a good solid end to the trip. As usual, age showed at the end of the day, as we watched Kate race Robert up the first hill, and met Damon coming back down the track without his pack to see if anyone wanted to give him another one to carry! But we made good time overall too and were back at the cars by 14.00 and sitting down to a meal in Katoomba at 16.00.

Thanks to everyone for a great weekend – Pantoney’s Crown is an unusually rewarding walk, with a well-defined goal you can see for most of the approach, spectacular long-distance views, the magical close-up rockscape of the pagoda country, and enough scrambling to add some excitement.