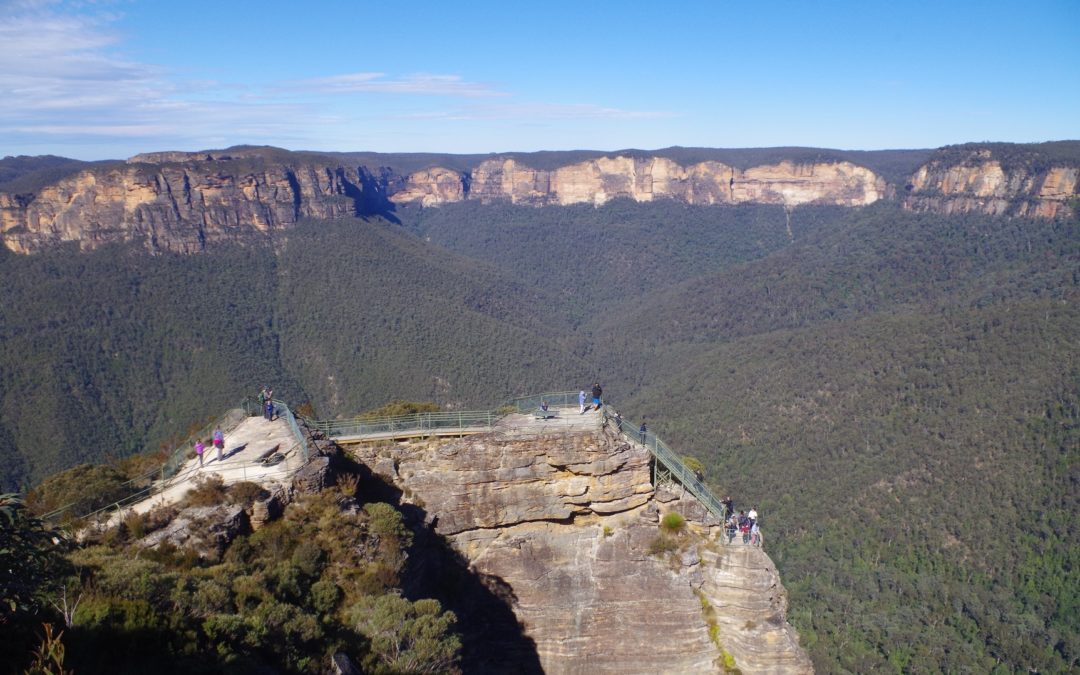 As you can see, a cast of thousands, including a strong contingent (8) from Danmark. France, Switzerland, Netherlands, Germany, China, and New Jersey were also represented (have I left anyone out??). And not a single “no show”, either!

Most of met up at Sydney Central for the 2 hour train trip to Blackheath. We were fortunate enough to be able to be seated altogether (except a few in the next car). On getting off at Blackheath we arranged a group photo before setting off for the town centre with its toilets and hot water – very useful on a cold day. The day started out rather cloudy and stayed that way until about Wentworth Falls hen the cloud cleared to bright sunny, but cold windy day. Typical Blue Mountains winter.

Then we set off via the Memorial Park and then Pope’s Glen Reserve, thus avoiding a road bash to Govett’s Leap. Pope’s Glen is a pretty little valley which follows a stream which eventually ends at a pool before falling over the cliff at Horseshoe Falls. The pool was a pretty site and many photos and selfies were made here. Then the creek was crossed via stepping stones and the track rose briefly but steeply to the first lookout. The people who were on their first trip to the Blue Mountains were greatly impressed by the panorama of Grose Valley before them. This was the view that Charles Darwin called “stupendous”. We then proceeded on a climb along the track which more or less follows the cliff line, with more great views along the way. Comments were made about the beautiful golden yellow colour of the cliffs.

Eventually, we made our way to Pulpit Rock and settled own for lunch. Most of the group had a look around and went down to the lower lookouts which give the place its name. The lookout is very windy but sheltered sunny spots could be found.

After lunch we returned the same way to the aforementioned steam crossing, and from there we went to Govett’s Leap via a track which is steep (but thankfully not that long) but in poor repair. After another toilet stop it was then straight back to Blackheath via Govett’s Leap Road. Once in town there was a choice of catching the 3.14pm train back to Sydney, or waiting for the 3.44pm train and meanwhile having coffee and cake at the Cafe. 12 chose to go straight back on the earlier train and 10 went to the cafe. Banana bread was on the menu and our international students liked this novel piece of Australian cuisine.

Then it was back to the Station for the train trip home. Almost all the walkers were international students who were most impressed by the scenery. And for most it was also their first trip to the Blue Mountains.