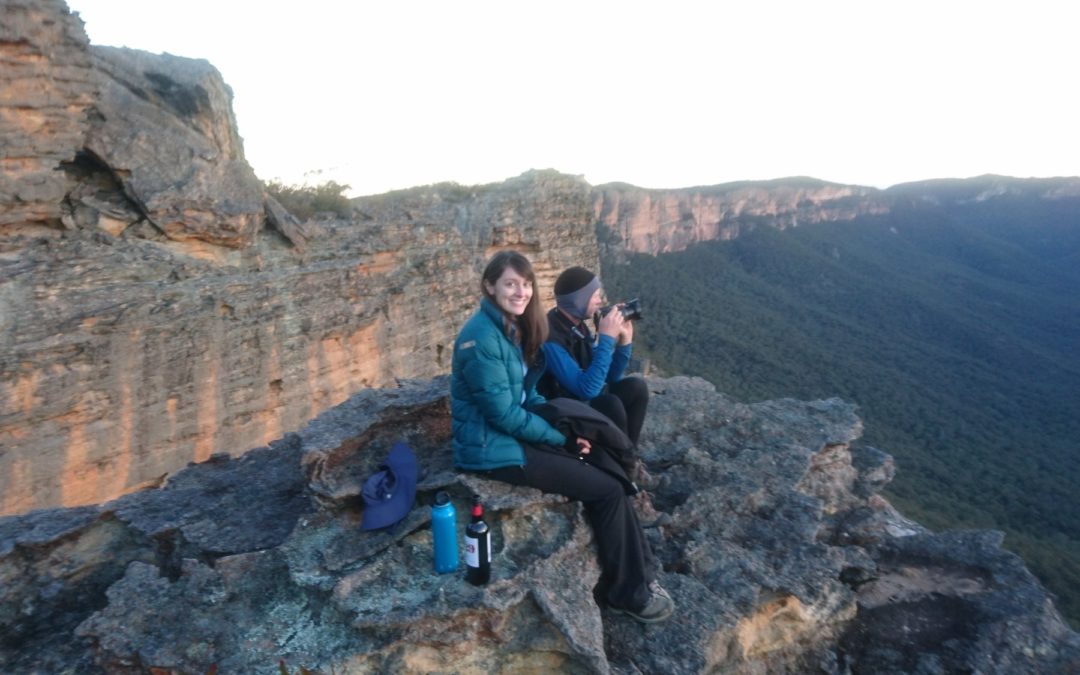 In the end, mine was the only car available for this trip so the numbers were limited by car space and more would have attended otherwise.

It was late on a cold and starry night that the party of four arrived at Newnes, setup tents and got into warm sleeping bags. When we woke in the morning our tents had frost on them. The frosty morning was soon dispelled with a cheerful breakfast fire on which nice hot cups of tea were boiled, and by the time we set off, rays of clear winter sunshine were reaching further and further down the valley and about to reach us. We headed up Little Capertee Creek and past a grassy paddock and log cabin where a wombat was seen ambling slowly across the meadow.

Warm layers came off as we began a steep climb in the morning sun, working our way up to the base of cliffs. These we skirted until we found a way up using a fallen log and a hand line. Then, after some further climbing we finally gained the summit plateau where we could stop for fine views down Little Capertee Creek and beyond down the mighty Wolgan Valley. On the skyline to the west could be seen some of the Red Rocks, and possibly the infamous and overdramatically named “Pagoda of Death”.

After taking plenty of photos here we set off along the plateau, following gentle ridges that gradually evolved into more complex pagoda country with some route finding and easy rock scrambling. After a while we came to a delicate arch, an incredible work of nature, wrought by no force other than wind, rain and fire, and yet rock art in its own right. Beyond stood Mt Dawson, our next objective. By now the sun was about as high as it gets at this time of year and for just a few hours of the day there was the sense of Spring with mild temperatures, birds chirping and wildflowers out.

At the base of Mt Dawson we dropped packs and enjoyed a late lunch, comprised as a matter of course of at least one jaffle and at least one cup of tea. Then a short detour was made to fetch water from a nearby stream. My leg got garrotted with a stick somewhere along here but as it was no more than a flesh wound, we pressed on regardless once Maj-Britt had ducked back to our packs to fetch a band-aid. Fresh clear mountain water was soon found and we headed to the summit of Mt Dawson for spectacular panoramic views in the afternoon light beneath an entire hemisphere of ice blue sky. Stretching away to the north was the weathered and broken escarpment of the Red Rocks, to the south were cliffs stretching into the distance, to the east lay a labyrinthine jumble of pagodas and steep valleys, and to the west lay the vast expanse of the Capertee valley with the Pantoneys and Airlie plateaus presiding.

In the remaining short hours of the afternoon we began our journey north and after some first class bushwalking with superb views we reached a spot that would serve as an idyllic campsite with a nearby vieiwing platform from where we could watch the sunset. So tents went up and firewood was collected (though you hardly needed to) and then we sat out among the pagoda gallery to watch the sun go down. There was some light cloud on the western horizon and when the sun got below it, it got lit from below in pink, like an arc, as if from a torch beam.

On dark we returned to camp and got a fire going, which turned out to be the central hearth of the next 6 hours of eating, drinking and conversing. It was a great evening where we talked about anything and everything and the time just seemed to fly by, it seemed like in no time at all it was almost midnight and we hadn’t even started. But bed time it was and the night was much warmer than the previous night at Newnes, not just because we weren’t down in a valley, but because we’d spent half the night beside a warm campfire.

Nothing quite beats a Sunday morning like this. Unzipping the tent to reveal a crisp cold morning with soft winter sunshine filtering through the trees, a cobalt blue sky, and a cheerful morning campfire with a billy full of clean mountain water at a rolling fisheye boil. So after our necessary tea and jaffle(s) we continued the Red Rocks traverse.

More pagodas, more cliffs and more panoramic views, we eventually reached the “Pagoda of Death” which we decided to rename to the “Pagoda of Vitality” because we all survived the descent off it. And then we made a short size trip to The Room to check out the 4 walls, the corridor and the balcony. We lingered at The Balcony, enjoying the expansive views over the Capertee and the rippling dark green jumble of peaks and ravines to the far north – the Wollemi Wilderness.

It was time to return to Newnes, we took an easy route down the creek, replenished our water supply and then, when the route opened out into an idyllic meadow, we stopped for lunch. Here was an unusually shaped tree stump with a bulbous top, and photos were taken here.  From here it was a short walk back to the car where we arrived at mid afternoon.

A great weekend of perfect weather in a fantastic area and great company. What more could you want.

Until the next trip.
Ashley Eylenburg (Ashley Burke)