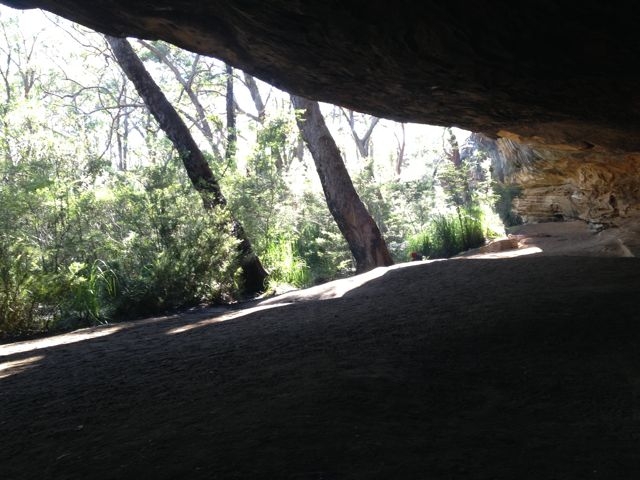 For those who have not had the pleasure of camping in Pindar Cave, I hope this report whets your appetite. Our journey began in the last carriage of the train to Gosford, a carriage designated as a quiet carriage. The loud voices of some of the slightly inebriated passengers almost began a physical altercation that was narrowly avoided. At Wondabyne station, NSW’s second shortest station after Zigzag, we alighted and began our climb to the Great North Walk.

Three of us began the walk, Tom, Yi Fan (Tyler) and me, and we felt the first 440 m of track in our thighs and lungs as we climbed to the fire trail. This was Yi Fan’s first serious bushwalk and was challenging, but luckily he had stocked up on his favourite high sugar content junk food. We trekked at a steady pace to the Pindar cave track turnoff where we constructed up an arrow made from wood to show our latecomer Gavin in which direction we were heading.

The track began to narrow and at times was no wider than our shoulders. The smell of the bush was invigorating as we passed through low scrub and stunted gums until we reached our first rock platform. The rock platforms were always a good location to practise your navigation but in the last two years someone has painted marks on the rocks to show you where the path led. This has taken some of the enjoyment out of the exploration process, but is probably useful for those who are not strong on track finding.

The track skirts around the low mountains on the way to Mt Pindar lookout. This lookout is the only location where you can see all the way to the water at Mooney Mooney Creek. You can see as far as the Baha’i temple at Ingleside 22km away. From the lookout the track headed downhill following the creek bed which was a bit damp until we arrived at the waterhole. This waterhole is suitable for swimming and is a great place in summer to cool off. The final part of the trek saw us arriving at Pindar Cave which is a large expanse of rock overhang that has a sandy floor and lots of dripping water coming both through the ceiling of the cave as well as over the rocks above the cave. We each found a suitable place to set up our sleeping gear and then proceeded to search for firewood. Much of the firewood has been stripped over the years due to the large number of people that have camped in the cave but we found enough deadwood to keep our campfire burning well into the night.

Above the cave is a collection of rock platforms that you can climb, and viewing the sunset whilst sitting on these platforms is one of life’s simple pleasures. As the evening descended, Tom enjoyed the peace of the location and its suitability for meditation, whilst Yi Fan and I headed back to our camp so that we could light a fire. Gavin soon joined us after walking into the area by himself as he had missed the train we were on. We sat around the blazing fire, prepared our meals, and talked about life, whilst contemplating the hypnotic effect the fire was having on us. The sky was clear and later that night Gavin, Tom and Yi Fan, climbed the rock platform to experience the myriad of stars.

The birdsong of a clear morning greeted us and after a leisurely breakfast, we packed camp to return to Wondabyne station. After a chocolate break for morning tea, we reached the final downhill and descended to the station where we did not have to wait long for the train back to Sydney.

This camping experience so close to Sydney is one I recommend to anyone who is time poor, or is looking for a good walk in the bush as their first overnighter. Total distance covered was about 12 km which may not sound much but with a pack containing food, water, sleeping gear, clothes and other items, one feels that you have been on a satisfying bushwalk.