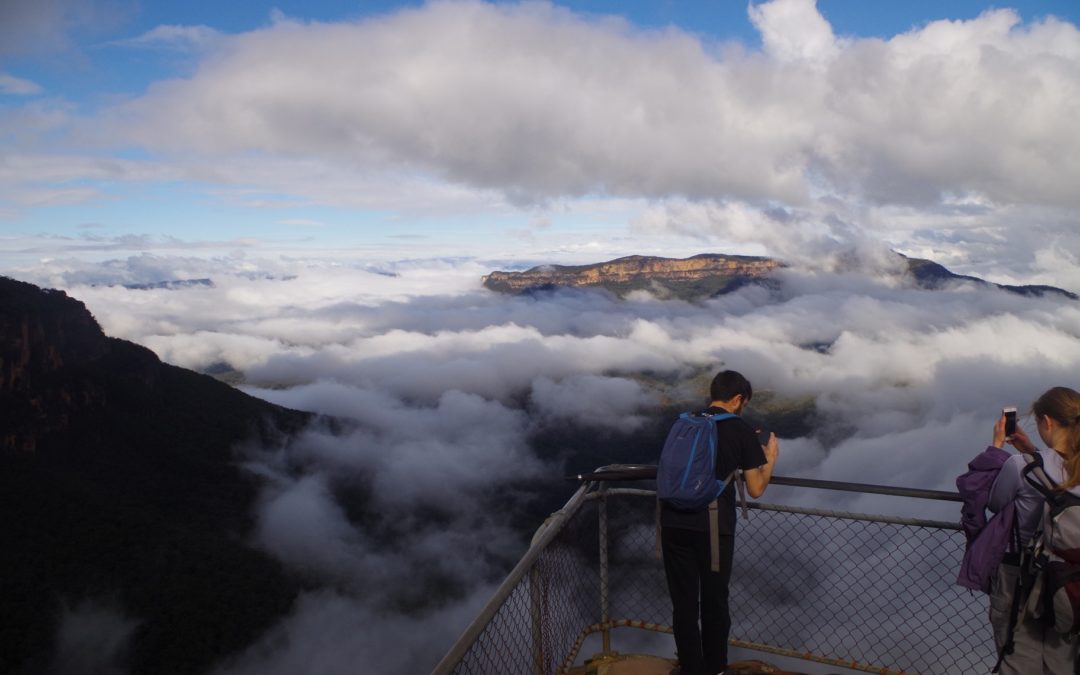 This turned out to be a very good walk in  good weather, despite a rather chaotic start. And yet again, like for my other walks this year so far, more extraordinary luck with the weather.

For a start, when my radio alarm went off it gave – nothing! Apparently the ABC station was offline for maintenance. Thus I realised that I would have to get the later train from my local station which resulted in urgent texts and emails to people that I was getting on the Blue Mountains train at Strathfield, not Central.

Then Maj-Britt texted that there was no Blue Mountains train – it was cancelled due to an accident at Clyde. Passengers were being directed to go to Penrith and get a Blue Mountains train from there. So another series of texts ensued to get everyone to meet me on Strathfield Station (except Xuan who was getting on at Granville). So off we all eventually went to Penrith and at last got on the Blue Mountains train there. Xuan was ahead of us on a local train. Passing through Werrington we saw the only wild animal of the day – a Kangaroo.

Meanwhile it had been raining all the way from Sydney to Penrith, but the radar showed it clearing up at Katoomba, so things were looking up. Indeed by Woodford Blue patches of sky could be seen, and after Glenbrook there was no further rain for the rest of the day.

So we arrived at Leura, and a passer-by took a group photo so at least I was in one. Then it was a fairly short road bash through Leura Shops and to the start of the Lyrebird Dell track at Gordon Falls Reserve. The Lyrebird Dell track is in poor condition but it goes through the picturesque little valley of Gordon Falls Creek. Because of the recent rain the waterfalls there and at the Pool of Silaom were running well. The it was up the series of steps that I call the never-ending steps (because it seems like it) to reach Gordon Falls Lookout. Unfortunately a busload of 30 tourists had just arrived there ahead of us, so I decided to give the lookout there a miss and continue along the cliff track to the other two lookouts there which give just as good a view, and no hordes of tourists. (In fact it was noticed that on the whole walk tourist numbers were quite low – probably put off by the forecast of rain). The vista over Jamison Valley, the Kings Tableland, Narrow Neck, and Mt Solitary was wonderful, with clouds encircling the high points (see photos). The walk was worth it just for these views.

Then it was down along Federal Pass to Leura Cascades, and on a ledge above the Cascades we had lunch, to the sound of the water running trough the Cascades.

After lunch we continued along Federal Pass and descended to the bottom of Leura Falls. On the way down we had to negotiate some fairly steep metal steps – all damp and slippery from the rain – and on one of these Indigo took a slip and fortunately Hazel directly in front of her held tight to the handrails to stop Indigo from sliding very far. Indigo got nothing worse than a sore behind but it could have been worse.

As we approached Leura Forest I warned people not to stop until we were on Dardanelles Pass as although Leura Forest has picnic tables, it also has Leeches. So we continued along Dardanelles Pass until we reached the base of the Giant Stairway. As usual, Lyrebirds were heard but not seen. The Giant Stairway is reputed to be the steepest steps in the Blue Mountains, with Furber’s and Pierces Pass being close seconds. It rises almost straight up for almost 300 metres via maybe 900 steps to reach the top of the Three Sisters at Lady Game Lookout. It is quite a slog but we eventually made it to Echo Point.

Although we could have done a road bash to Katoomba shops, I thought we may as well take the bus which would give us more time to take in the sights of the Katoomba Winterfest which was in full swing on the main street. Bus time came and went however, and we enquired of the driver of the hop-on hop off bus service who advised that the normal bus from Echo Point to Katoomba Station wasn’t running that day because of the street closures in town, but he said he would drop us off further up the road for free (as his bus was also not going to the station). Then he had a word to the driver of the “Trolley Tours”bus in front of him, and that bus driver agreed to take us to the station for free if we didn’t mind a circular tour on the way. Of course we didn’t mind!

So off we went on a free tour of various lookouts around Echo Point and Scenic World and past Katoomba Golf Links, until eventually ending up at the Railway. Here we decided to go our own way through the crowds at the Winterfest as we knew it would be hard to all stay together, and after taking in the sights and street stalls – see my photos –  we met up together back at the station, and got the train back to Sydney – no delays this time.

Everyone thought that it was a great day and a great walk, and considered how lucky it was that  everything came together at the start of the trip despite the train delays, when it could have resulted in people being all over the place.

And there no “no shows”, either!