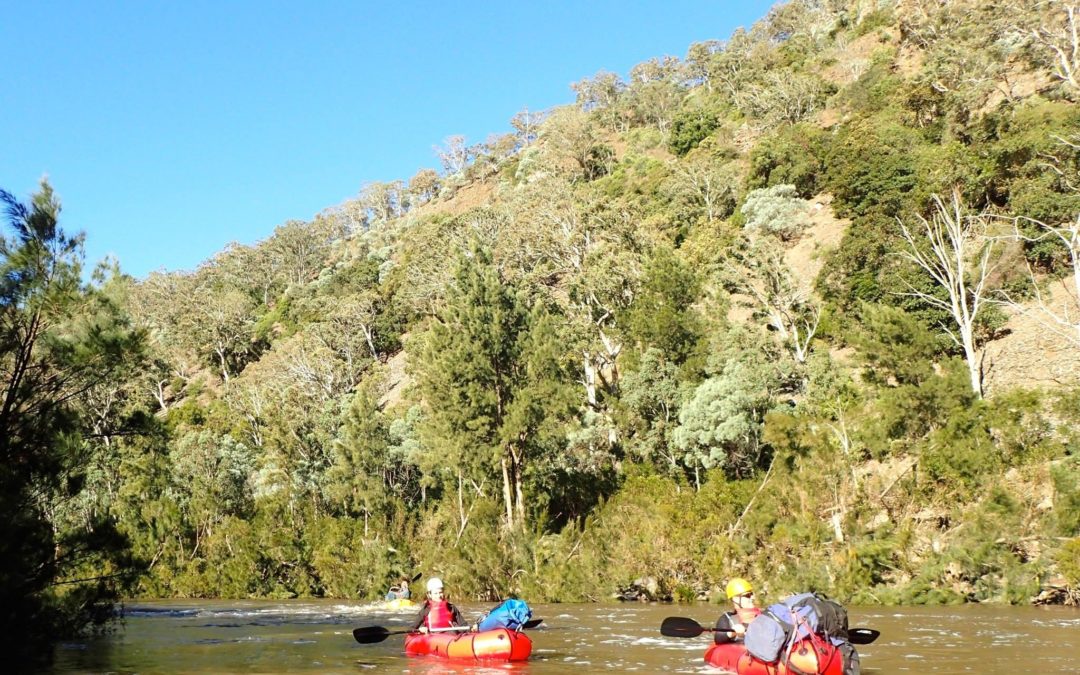 This was one of the best wilderness trips I have done. The plan was to meet in the Southern Highlands and either packraft the Shoalhaven or go scrambling in the Budawangs if there was no water. As the long weekend approached, and we endured one of the biggest rain events for years it became clear that it would be packrafting. The minimum for rafting the upper Shoalhaven is 0.8m at the Hillview gauge, which had been 0.5m through our long dry. Now it peaked at 6.7m – a devastating flood – and was still at 1.68m when we put our boats in and 1.51 when we took them out – just above flood level.

We decided to put in at Great Horseshoe Bend, about 30 minutes drive SE of Bungonia, on Saturday and get out on Monday at Badgery’s Crossing, 25Km downstream and the last exit point before the Tallowa Dam a further 24km downstream, which seemed unachievable.  In fact, it turned out that with this much flow we could probably have made it the whole way.

Clint and Tim spent a cold and windy night at Badgerys Lookdown and 9.00 found us all at Tallong General Store at enjoying a hot coffee in a frigid 7C. Leaving my car at Long Point (17km) as an emergency option, we drove to Bungonia and down the fire trail to Bullion Hill (4WD only). Then we piled ourselves high with overnight packs, rafts, lifejackets and paddles and headed down Assay Buttress at 11.00. An hour later we were 400m lower, on what were evidently recently flooded sand flats at Great Horsehoe Bend. It was a gorgeous sunny day, but with strong winds gusting up to 35kmh it felt pretty wintry and we began to wonder whether various friends’ skepticism about mid-winter packrafting was justified. In fact, for most of the world our winter is a decent summer, and they canoe and raft quite happily, as we did, with the help of a steamer and wetsuit boots.

We were away at 1.00, launching into a racing brown river that was still running through the trees on the banks. The adventure began. With high water the main hazards were not rocks but projecting trees – Casuarina chaos as we came to call them. Marty, on his first rapid on his first packcraft trip, wrapped around a Casuarina sapling and came out, but he did an amazing job of getting the boat upright and getting back in while still in the rapid. Not easy to do – must be all those years in the surf club! Soon afterwards Tim was standing on a rock below a rapid taking photos when his boat got loose. Clint and I managed to get it to the bank 100m further on and were waiting for Tim to scramble along the bank when we saw a helmet bobbing downstream and a paddle held high in the air – Tim had decided it would be quicker to swim! Some members of the party raised doubts about his mental health, but he emerged happy enough and we were soon on our way again.

Despite a blasting headwind in the open reaches we made decent progress, as the river was running fast with extended sections of Grade 1 and 2 rapids to speed us along. In this part of the Shoalhaven you don’t seem to get the Grade 3 rapids created by a choke of big boulders that are found elsewhere. Instead, many of the long smooth reaches end in a broad lake blocked by masses of rock scree stabilized by Casuarina forest. As you approach all you can see is trees, until a narrow passage appears on the right or left where the river forces its way through. At this river level these passages were Grade 2+ rapids with a pretty clear channel, but many big standing waves. As long as you can keep the boat straight it’s fine, but failure to correct after hitting a wave is fatal!

As we approached Blockup Gorge we started to look out for a rapid called the Washing Machine that had been written up in scary terms in Waterways Guide. At a couple of places where there seemed to be rocky chutes we even got out and scouted from the bank, but we didn’t see anything worse than 2+ and we ran them pretty easily. When we reached the spot with amazing folded rock strata just before Blockup gorge we realized we must have passed it – the water level must have just drowned the problematic features.

Blockup Gorge with its famous red walls was beautiful, but shorter than I expected. The exit from Spring Creek Canyon was particularly striking, with a substantial waterfall. Very soon afterwards we found ourselves in a long, calm reach with the Tolwong Chimneys visible on the right bank. It was 4.30 and as we had covered our planned 10km and the sun was getting low we pulled over to camp. The grassy flats opposite the chimneys are a recommended campsite, but had been underwater only a day or two earlier and so were rather muddy. We chose the highest point, under some big trees, and had a pleasant night around the campfire. It is possible to access the river a little further down, via the Trestle Track originally built for the mines, and there were some old machinery parts lying about our campsite.

It was reasonably warm in the evening, but dropped to 5C overnight, so getting back into wet wetsuits next morning was a little challenging. We paddled across the river to inspect the old copper mining site at Tolwong Creek. There are a lot of remains from the copper refinery, and our two engineers, Marty and Tim, were able to reconstruct some of the process that must have gone on there. This would have been a drier place to camp, but perhaps not advisable given the modern stabilization work that has been done to prevent the waste from the refinery sliding into the river – it’s presumably full of toxic material.

By 9.00 we were off down the river, which was outstandingly beautiful at this hour with low morning sun lighting up the sides of the gorge and a thin mist rising from the water. At one of the bends between Camp Oven Spur and Hermit Spur we encountered one of the tricker rapids on the trip. The river disappeared down a narrow chute between stands of casuarinas, as usual, but in the middle of the chute it turned almost ninety degrees. The branches reaching in from either side, the water racing through generating standing waves, and the need to make a sharp turn were a demanding combination. Not everyone stayed in the boat.

Shortly after this we talked to some bushwalkers on the bank, and then reached Bungonia Creek, where there is another access track. From here we followed the wide, slow Louise Reach to Long Point. The notes we had recommended the ‘straightforward left hand channel’ instead of the main channel on the right, which is allegedly full of boulders and casuarinas. This channel is a striking feature on the topo map – almost as if someone has dug a canal across the tip of Long Point to make an island. I have collected water there when camping at McCallums Flat, and it seemed like a small creek rather than the mighty Shoalhaven.

The left-hand channel proved to be one of the highlights of the trip, although I’m surprised you can run it when the river is not in flood. We nosed in until the trees closed over our heads to find a little river rushing through the forest. The ground dropped away to the right and somewhere down there was the main part of the Shoalhaven. After perhaps three hundred metres the water poured down a step chute back to the main channel, which was by now wide and calm. This chute was like something from the Penrith whitewater park, a narrow race of whitewater perhaps eight metres wide tumbling down a slope. Tim was the first to go, and it carried him right down the centre, with the exception of an underwater rock at the bottom that kicked him to the right through some branches. He was still upright, so we all followed and had exactly the same experience – there was only one way to go here!

By now it was 12.00 and we stopped for lunch at the foot of Kingpin Mt. I have crossed the river here above some rock rapids when bushwalking, and it was evident that the river would do something dramatic as it drops steeply through this narrow channel and then hits the vertical face of Kingpin Mt to turn ninety degrees to the right. Going to check out the rapid I must have made no noise walking on the sand, as I came right up on to a sleeping roo. She raised her head, saw me, and went in a single movement from lying with her legs out to on side to hopping away- a bit like a surfer doing a pop-up. The rapid looked pretty scary, dropping several metres vertical in perhaps fifty horizontal and with a series of standing waves. I went back and frightened everyone, but after lunch it proved straightforward, although a really fun, fast ride.

We enjoyed three more good rapids before arriving at Badgery’s Crossing at 2.00 in the afternoon. It had taken us just 8.5 hrs of paddling to cover all 25km without making any effort to hurry it along and we had time to walk out and collect the cars a day early. Tim, not having to be at work on Tuesday, decided to carry on to Tallowa Dam, which he hoped to reach by Monday night. We handed over the PLB and some extra food and he headed off to get in a couple more hours before nightfall. The rest of us dragged 20+ kilograms of wet gear up the 450m to Clint’s car – the worst part of packrafting – picked up the other cars and were heading home down the Hume by 7.00.