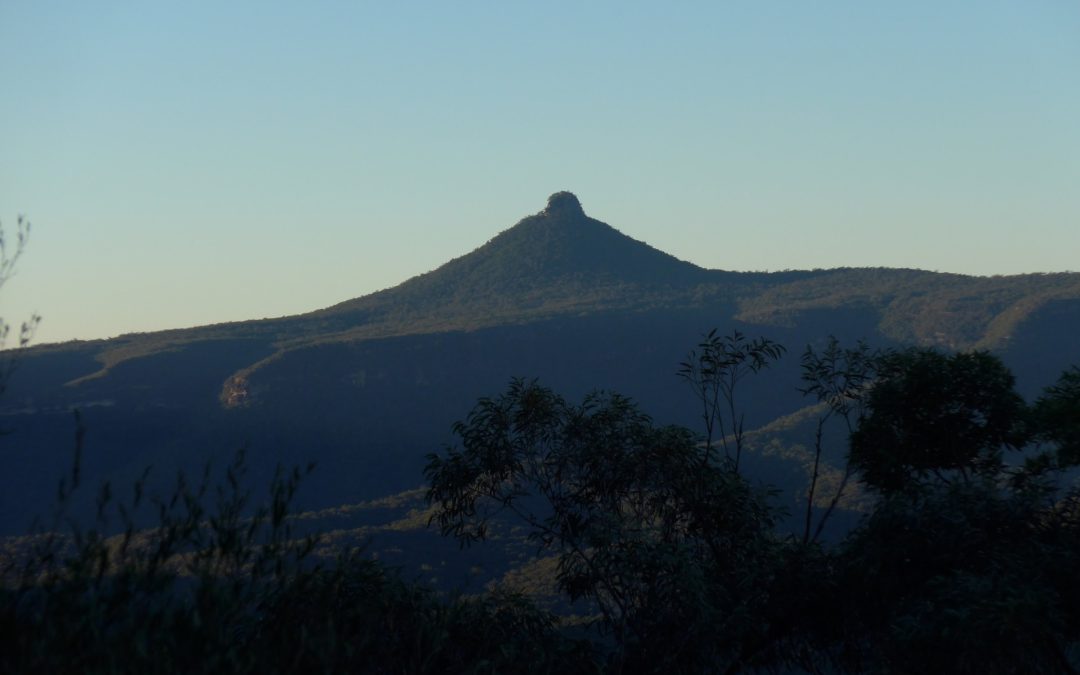 Sometimes persistence pays! And some mountains demand that you “get it right” in order to climb them. And this was very much the case with The Castle, in the wild and rugged Budawang mountains on the mid South Coast. It might be only 820m in height but has 700m of that to climb up, and  is regarded as one of the harder mountains in NSW to tackle. On two occasions the summit has eluded me, caused by either not allowing enough time for the whole climb, or bad weather. The final climb, with rock scrambles , rope holds and vertical drops, is not something I would like to try in bad weather either!  So this time I planned a disciplined approach. A good weather outlook, an overnight camp at the base (Long Gully) then a pre dawn start, to maximize the 9 hours needed to complete the climb.

The weather was forecast to be drizzly on Saturday but fine on Sunday so I wanted to capitalize on that. And all fell into place. SUBW members Lewis and Jeremie, (who both had not been to the Budawangs before)  arrived at Yadboro by 9pm on Saturday night. Despite a number of other people already camping in the area, we found a lovely peaceful place to set up tents in the forest. With the odd leech and screeching yellow belly glider for company…

We set off early, leaving at 6.30am and heading up Kalianna Ridge after a torchlight creek crossing and walk through the jungle like forest. It was a beautiful dawn , cloudless sans for a some early  fog rolling off  mountains to the west. After attaining the ridge top under the nose of the Castles southern bluff, we bumbled our way under the cliff lines, with the Castle looming over us, through a rough tree root and boulder infested track to a wonderful camping cave. It is deep enough to make a cozy campsite. There was very little water about , unlike on my previous visits.

After a break, we left to climb up to the remarkable “ tunnel”.  This is a crack in the ridge line of The Castle’s “tadpole tail” (from aerial pictures you can see what I mean), which literally becomes a tunnel to crawl through to the other side of the mountain. At the end is a short rope to descend down an awkward boulder scramble. We got there by 9.30 am and then the real challenge began. Up more ropes we went, the way getting very steep now. And here is where I should learn to read my trip notes more carefully….

There are two ways to go, one goes up a steep gully with a fixed rope. But this is not the preferred way, because it then goes to a small cliff with a horrible old and  frayed rope. The other (better) way turns left a bit sooner, and has just an awkward rock traverse up a ramp and just a steep gully to climb up. No prizes for guessing the way we took! We looked at it with dismay (not knowing the easier way existed so close nearby). Jeremie managed to scale the rope first, so he took my good rope and fixed it at the top for Lewis and me. I used a harness with a Jumar (ascender device)  to help me climb the vertical cliff. It was tricky and took a bit of figuring out the best way to get up, but I managed then it was Lewis’s turn. He was new to this sort of thing, but managed well and soon we made it . Only to then see the pink tape marking the better route at the top!

More rock traverses, chimney climbs and rope climbing took us higher and into more exposed rock. Although not like “true” rock climbing, there were chimney climbs and enough exposure to make you take it all very seriously. And a fall here would not end well at all! It’s no place for the faint hearted, or those who suffer from vertigo!

By whatever means we could , we clambered up to the final edge of the plateau. It’s almost an anti-climax at first. The summit is a big flat expanse of heathland and low scrub. But there are the views! In any direction the views were spectacular. You could see up and down the South Coast, and into the greater Budawangs with their assortment of wild rock formations. Truly a memorable place. A wedgetail eagle soared above is under blue skies as we ate lunch around 12 noon, right on target! Then all too soon, it was time to return the way we came.

It would be almost as slow coming back. It did seem a little easier coming down the ropes than I expected. One was a very nice new and un-knotted rope so I chose to abseil down it. We decided to try the “pink taped” gully and gladly avoided the cliff with the dodgy rope on it. Then back through the tunnel and then gradually made our way back to the Long Gully car park in glorious afternoon sunshine.

We got back to the cars by 3.30pm.  Lucky for us, the Heritage Bakery at Milton was still open and we enjoyed some delicious homemade pies, before the long but relaxing trip back to Sydney.