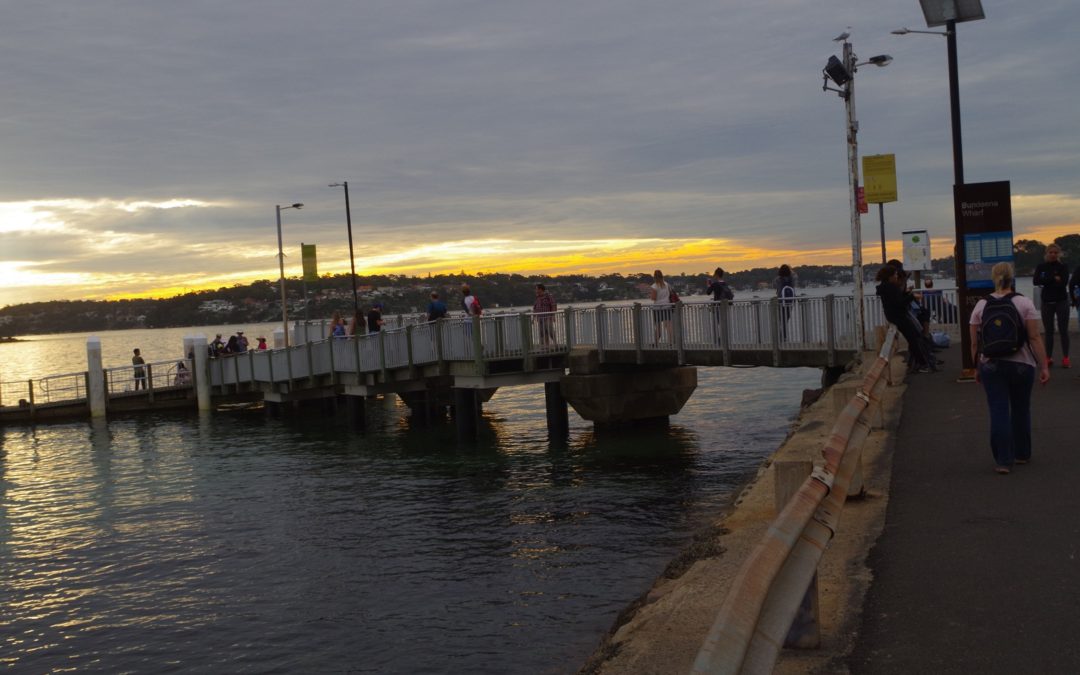 Most of met up at Central Station, and proceeded to Loftus, picking up Hiswaty along the way, and Cathie waiting at Loftus.

Normally there is a gap of almost 20 minutes between the arrival of the train at Loftus, and the departure of the tram to National Park. This time the train was a few minutes late which whittled away at the time gap but we still thought that there was time to get a coffee at the cafe at Loftus and still get the tram.
The cafe “barista” there though seems to have a leisurely concept of time, and by the time the fourth coffee was made it was just 4 minutes to tram time. This meant a last minute dash over the overhead rail pedestrian bridge which is actually a series of zig-zags allegedly to make it easier for disabled access, and we just made it to the stop as the tram arrived.

So we managed to get the last seats on the rather crowded tram and we set off for the National Park. It was much better crossing the Princes Highway this way instead of dodging cars like we did on this walk last year (see trip report in October). And also enjoyable to be able to get to the National Park entrance in 7 minutes instead of a 45 minute road bash.
The tram was so crowded that we paid our fares after we had got off! (The tram by the way was on loan from the Melbourne system, hence the “St Kilda Beach”sign on it).

A few minutes was wasted however finding the start of the Honeymoon Track. The sign to it had no arrow and implied that it went via the NPWS office, which it doesn’t. We and a family who had walked up from Grays Point – also having trouble finding it – eventually did find it, and we set off down to Audley. There was some traffic dodging her as the weir at Audley has its footpath on the other side of the road. The we found crossed the road – dodging traffic again, at the cafe to access the track to Winifred Falls.

This track rises up fairly steeply, but it is also quite rough, having also been subject to erosion from heavy rains. After a steady climb up it eventually levels out and proceeds through heathland. At times the brush grows completely over it, giving one the impression that you are walking through a vegetated tunnel. The track crosses Warumbal Road, and then becomes a wide fire trail, gradually dropping down until becoming a steep grade shortly before Winifred Falls.

At Winifred Falls we had lunch and admired the view.

After lunch we set off to Anice Falls. This track can be hard to find and requires crossing of South West Arm Creek just above Winifred Falls. If you cross at the wrong spot you end up on a dead end track. The right track is accessed about 150m up the creek on a flat crossing of the creek (bit of water paddling is required unless it it very dry). The track rises fairly steeply for maybe 250m and it is rough. Then it levels out to go through groves of Casuarinas, before eventually reaching the track junction with the Mt Bass trail. At this section mysterious markings of blue paint were noted on the ground, with numbers every now and then. We speculated about what they were, and it possible that they are markers for a water pipeline which might be below the surface. This hints at some digging work there happening some time soon.

We reached the top of Anice Falls, which doesn’t provide any view of the falls as there is no safe way of getting to the base of the Falls. (Yes, I know, can be abseiled!). Then it was off on the track which goes to Maianbar Road. This track proved to be rather boggy in places – as there are hanging swamps here –  and here we found some Sundews, which are tiny carnivorous plants. Also in a couple of places the pools had an oily-looking slick on them which was strange as the nearest road was almost 1km away. A natural cause?

I overshot the side track to Maianbar, as there appears to have been lush growth of the heath since we did the walk last year, and ended up at Maianbar Road. It was simply a matter of back-tracking 150m to the side track, which we followed.

This track goes for a bit over 3km, crossing 2 fire trails and affording views of Port Hacking, The Shire, and the buildings at Sydney and Chatswood. (There are a couple of side tracks to the left by got no idea where they go). Eventually the track ends at the third fire trail (Yenabilli Point trail) which is trafficable by normal traffic and is obvious as there are houses about 200m further on. Noted the sign warning about park closure at night for deer shooting (introduced deer which are causing environmental damage).

We crossed Maianbar Road and found the bus shelter which marks the start of the track down to The Basin (Cabbage Tree Creek – aptly named as there are plenty of Cabbage Tree Palms here). The track dropped down to reach The Basin then followed the shoreline and its Mangroves for quite a while. It is rather soggy underneath as it is very close to the tidal limit, and in a couple of places there are side tracks to use when the track is covered at high tide (which in fact was soon approaching this afternoon). No leeches as leeches don’t like salt water!

After a while the track reaches the footpath from Maianbar which locals use to access Bundeena. The Basin is crossed via a footbridge and it was noted that there was a swift tidal current running under it – going inland.

Eventually it reached the Bonnie Vale Campground which is where we start encountering the streets of Bundeena. It was still 20 minutes to ferry time, and Tim asked should we get a hurry up to get to the wharf on time (as the ferry runs only hourly). I assured everyone we would get there on time, and we did reach the wharf with less than 10 minutes before departure time.

This showed how beneficial it was to save time by getting the tram, as if we had done the Loftus-National Park road bash we would have ended up at Bundeena later and waiting another 40 minutes for the next ferry.

We got on to the ferry which was quite crowded, and reached Cronulla less than 5 minutes before train time. This required a last minute dash for the train but everyone got on.

So then it was back to Sydney, with Cathie leaving us at Sutherland.

It was an interesting walk which is not very often done.

Pity about the two “no shows”,  though. I need to advise Club members that if they are “no show” on walks they might get put on a wait-list on walks that are popular and fill up quickly.