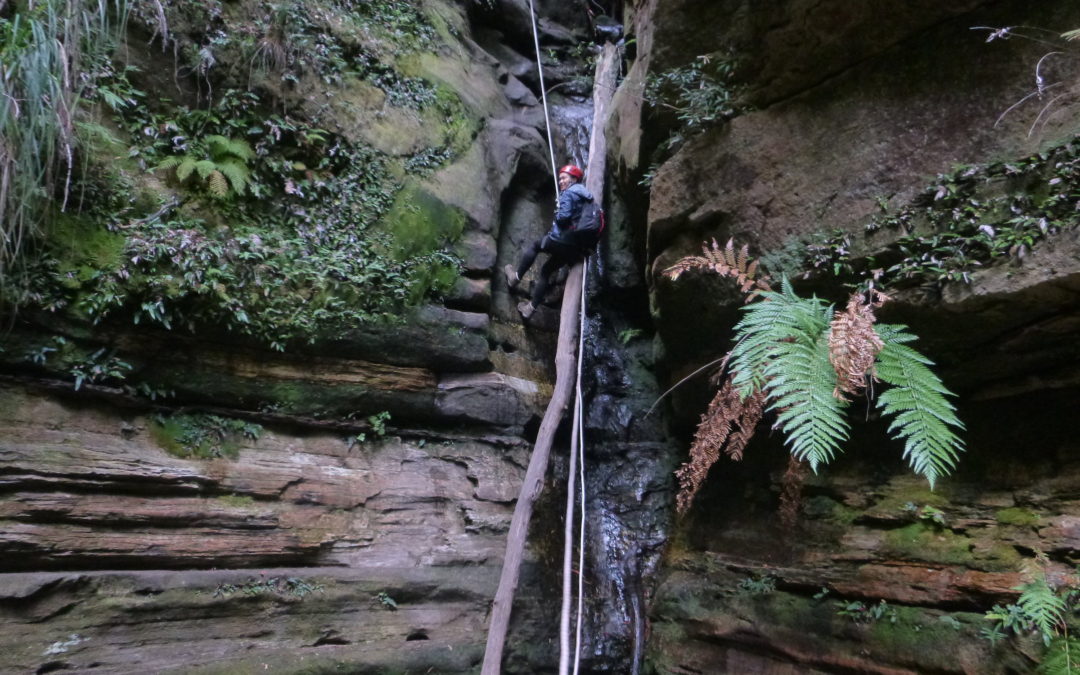 We all met around 8am at the Mt York car park. Once everyone had arrived we organized the gear we would need for the abseil training. I decided the best location on Mt York to train beginners was the gully. I set up the first abseil on the 3 metre slab and gave a demonstration of how to correctly fit a harness, helmet, attach yourself to the rope with the descender and abseil safely enforcing the A-F safety checks. Tony was explaining and demonstrating the importance of the bottom belay technique.

Everyone in the group were quick learners and abseiled correctly using a variety of descenders myself, Tony, April, Ted were using hydrobots while Savannah & Peter were using rappel racks.

Just as we about to finish our last set of abseils on the 3 metre slab a small commercial group from the Australian School of Mountaineering came down so we negotiated with the guide which abseiling walls we would use to allow them to train their clients who were on a half day abseiling trip. We moved to the higher 8 metre slab whilst ASM set up a beginner abseil on the 3 metre slab and then moved on to the overhang since we were still practicing on the higher slab. Once ASM had finished abseiling the overhang I rigged two lines going down the overhang for us to practice on. Peter being an experienced industrial rope access supervisor gave us some examples on a chart of how easily carabiners can break in an abseil system under load even if they are loaded in the correct direction. The slightest movement of a few centimetres towards the spine had caused some of the tested carabiners to break.

Everyone had a turn abseiling the overhang learning the techniques of how to negotiate the obstacle with the correct timing of how to lower your body so your eyes are in line with your feet to avoid hitting their device or any part of their body against the rock wall. After several goes abseiling down the overhang we stopped for lunch with some of us driving down to the Mt Vic servo. Tony said he would remain at the top of the cliff to guard our gear and ended up using the carpet cut off we were using as rope protection as a make shift blanket as the temperature was beginning to drop.

Once we got back to the overhang after lunch Tony was practicing self-rescue using mechanical ascenders such as a chest ascender and Jumar. I decided it would be a good time to practice my own self rescue technique using my prussic cords.

Since it was getting late in the afternoon we packed up the abseil rig and Peter who does geocaching wanted to find some geocaches that are located on Mt York. We found them not far from the lookout and set up our camp for the night and Tony had brought the ingredients to make a tuna stir-fry for us for dinner.

Upon waking Sunday morning it was a bit chilly from the wind gusts and overcast sky but I decided we would still stick to the plan to go down Juggler canyon. We left camp just after 8am and waited for Peter at the Mt Victoria servo as he wanted to find another geocache near the historic wells. Once we gathered again our convoy we then drove to the parking area for Juggler canyon near electricity tower number 20. We brought two ropes with us Tony had the 50 metre 9mm static from the club and I recently bought a 40 metre 9mm speleo static I brought from climbing anchors a few days before the trip so I could test it out in Juggler.

The first abseil in Jugglers is very easy the second one is more difficult as it gets narrow towards the main drop of two boulders wedged together to make a narrow overhang abseil or you can use the rocks either side to step your way down.

Further downstream we carefully made our way down the 9m abseil with some very light spray from the trickling waterfall. Some care is needed here to traverse onto the narrow rock ledges to your left near the bottom of the abseil to avoid getting wet in the pool below which is normally only waist deep. The abseils are only a very short walk from each other in Jugglers Canyon and before long we reached the last abseil the 20 metre overhang. The last time I did the overhang abseil was about 5 years ago from a sling on a small tree very close to the cliff edge on the right hand side as you face downstream. This time I went around to the left ledge and found a strong anchor point of 2 steel ring bolts and a steel welded ring drilled into the rock with a dyneema sling connected them together. Everyone abseiled the overhang safely with a bottom belay.

The only evidence I saw of someone being in Juggler Canyon recently was finding a Blue Mountains Adventure Company BMAC right handed riggers glove at the bottom of the last abseil.

From the bottom it wasn’t far for us to join the Rodriguez pass track following Grand Canyon to the pilcher track and back to our cars.