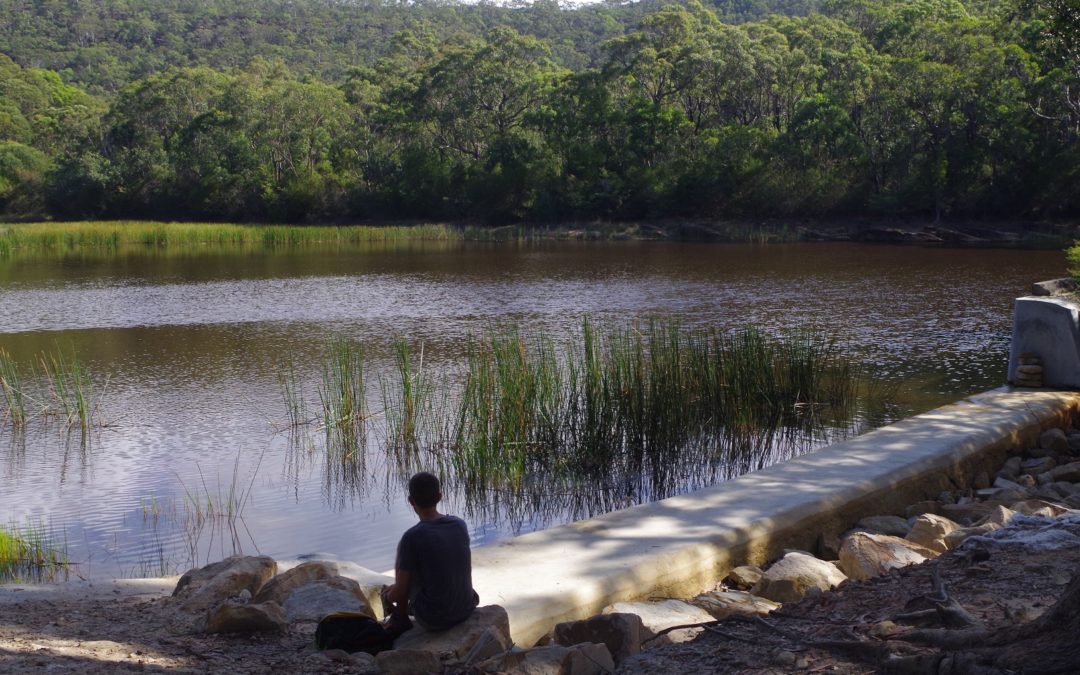 Another lucky break with the weather, with the previous day being a bit too hot for this walk, and the day after with heavy rain.
The weather forecast for this Sunday was for “a shower or two”, which was accurate; one shower at Woy Woy at 8am, and much heavier rain at 11pm. But in between – nothing! Indeed it was a reasonably mild day with some cloud in the morning.

The original 12 starters got whittled down to 7 due to such things as incomplete assignments, incomplete house moving, a Sunday “club meeting”, and one unfortunate who missed the train.

Even so, when the train arrived at Cowan, only 4 people including myself got out (Nicholas drove up). I knew there were two others on the train, but where were they? Unfortunately the train enters a long dead zone for phone reception after Cowan and it wasn’t until it almost reached Hawkesbury River that Cathie and Victor individually contacted me.
Victor had got in the front four cars instead of the rear four cars and couldn’t get off at Cowan, and Cathie had simply forgotten to get off there.
At least in disaster they were fortunate, as if they had each arrived at Hawkesbury River alone, they might not have wanted to start the walk from that end by themselves.
I got them to team up and tried to give them directions over the phone to the start of the walk at that end. I wasn’t helped by Google Maps failing to load properly so I couldn’t see any street names. They weren’t helped also by a local who sent them in the totally wrong direction to the old track – this local apparently being unaware that the track has been going up the Railcorp concrete road for the past 7 years or more.

Meanwhile, the 5 at Cowan set off along the Jerusalem Bay track and had a brief rest there (it was low tide), and set off the quite steep section to the top of the ridge overlooking Campbell’s Creek. It is as steep as any Blue Mountains climb like Furber Steps but much shorter (but also much rougher).
Then it was down to Campbell’s Creek and along the way encountered several small stone cairns (not the the track is exactly hard top follow here).

From Campbell’s Creek the track starts to climb again, passing at one point along some large rock platforms more typical of the area around Wondabyne.
Toward the end of the climb there is a mini Taros Ladder (see photo).
After the climb the track leads onto a wide path which doubles as a railway access road. Unfortunately the sound of the M1 Motorway across the valley intrudes every now and then. It was here that we at last met up with Victor and Cathie coming from the Brooklyn end.

Then it was off to a rock platform with views over the Hawkesbury River and Long Island, and had lunch. A cool sea breeze had also come up which was welcome as the temperature had got above the predicted 25 degrees.
We also saw a large Skink here (see photo) – the only reptile we saw on the walk.
Then we descended to Brooklyn Dam which has had its wall repaired (and also lowered to the original 1890 level). Zeyu practiced skipping stones across the water which worked quite well when he tossed them at a lower level.

Then it was up the last ascent which is much easier graded than the other climbs and on reaching the sign which said “Brooklyn 1.5km”(I think it said 1.5) we deviated to go along the old track which for some reason has been bypassed by NPWS in favour of the “official” track which eventually reaches George St via the Railcorp concrete road which is quite steep and potentially slippery. (This is the one that I got Victor and Cathie to use as it is easier to follow and signposted).

The old track is shorter to Brooklyn by about 700 metres but is rougher (as it is no longer kept in repair. It is also not signposted (except for one decaying sign that someone has propped up). I wouldn’t recommend anyone follow it unless they had surveyed it beforehand as it is too easy to get lost on dead-ends.

So eventually we got to Brooklyn Road and made our way to the Anglers’ Rest pub for well deserved drinks. Then it was off to the Station for the trains home. I said goodbye to the others as their Sydney-bound train left before my north bound train.

So it was a good day in good weather, and an interesting extra adventure for Cathie and Victor.

And no “no shows”yet again!