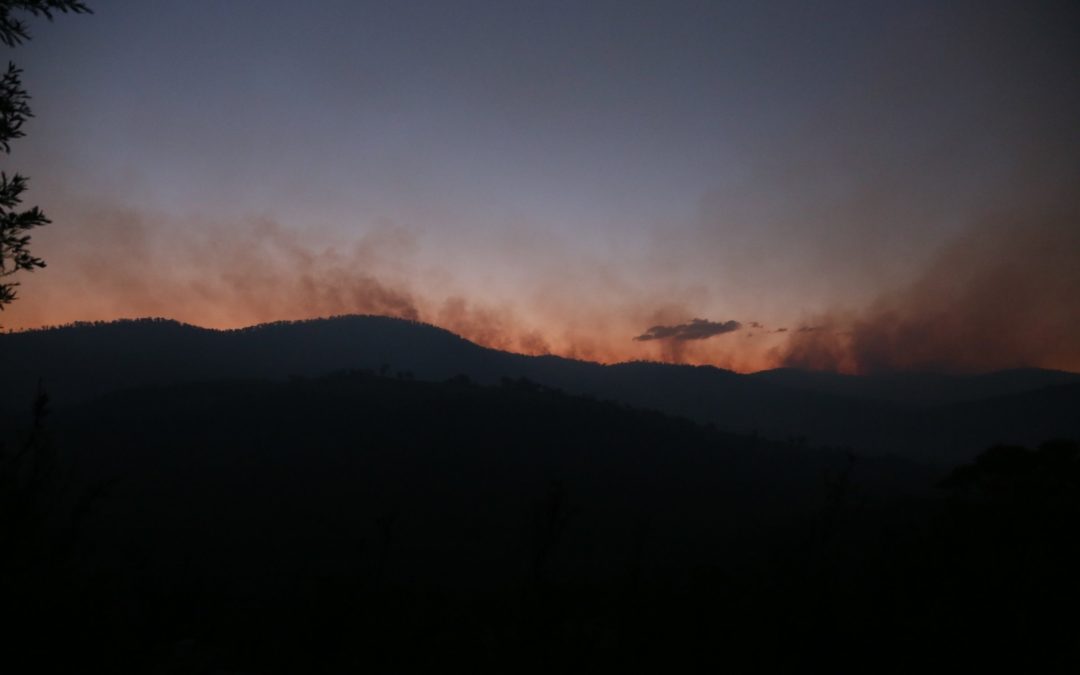 I love Namadgi National Park! An easy drive from Sydney down the freeway to Canberra, reveals a mountain filled wilderness that keeps me going back again and again. And in the case of Mt Gudgenby, this was my second attempt. Previously I had underestimated the timing, and then lost the faint access track to the saddle (ending in a soul destroying scrub bash) on a trip last year.

So this time, armed with a better understanding and a few useful waypoints in my GPS, Hiswaty , Jacopo and I set off on the climb!

Mt Gudgenby is 1700m high and mostly trackless. Access to a saddle by a faintly marked route helps get you to 1300m elevation. After that, you are on your own.

It’s a challenge for  both mind and body! Mind, for the navigational skill needed to work out the best way through thick bush and boulder strewn cliff lines.  Body,  for the sheer effort of ascending 700m over 8km from trail head to the summit.

We drive down to the National Park on Friday night and camped for an early start the next day.  We were at the Yankee Hat trailhead at 9am. The walk started out easily for the first hour walking through the pretty valley surrounded by mountains. Then the faint footpad was found that is marked with tape, and few cairns and not much else. We lost the trail only once, which is better than my last effort, where I ended up bush bashing my way up to the saddle,  only to discover the taped route at the end. It took another hour to get up to the saddle for a short break at 11am. Then it was time to commit. We stuck to the ridge line and took bearings constantly to aim for the summit. Hanging swamps,  thickets of scrub, fallen trees and jumbles of boulders made the going tricky, but it wasn’t as bad as I had expected. We all still got many scratches though!

Slowly as we got higher and higher, the views began emerging.  The large granite slabs and boulders made the climb much more exciting than just being in the bush. It was a mind game to find a way through it all. The summit trig loomed overhead, and about 90 minutes after leaving the saddle we got the last scramble up to the top. This entailed going up a steep rock gully then clambering up a dead tree. I think there may be an easier way up the other side, but this is the way  we got up and down. The summit was wonderful. Rock stacks everywhere, and views as far as Canberra, the Brindabella Ranges, Tinderry ranges, and all the way to Mt Jagungal in the south. Jacopo enjoyed doing some scrambles up other rock stacks while Hiswaty and I took time to explore the summit.

All too soon, we needed to get down, to allow for the time it would take to navigate our way down again. It was just as challenging , to make sure we stayed on the right bearing to meet the saddle at the correct point for our exit via the faint track. With a few corrective route adjustments along the way, this was accomplished, and we got back to the saddle by 3.30pm. It was a pleasant ramble back to the cars, but we were certainly tired by the end. A quick look at Forestry Hut near the Yankee Hat carpark ended our walk before heading back to Canberra for a nice Thai meal. Hiswaty left us there to join some Canberra friends, but Jacopo and I went off to camp on Mt Ginini afterward to see the night sky. It was a lovely starry vista from the alpine tops, but in the morning we woke to thick mist,  which made for very nice “snow gums in the clouds” photography.

One of the bonuses of Namadgi is the abundance of wildlife. We saw lots,( and lots, and lots)  of kangaroos , wombats, tawny frogmouths, a few snakes (dead and alive) and a trio of wedgetail eagles in the trees. This was a great treat for Jacopo, as he is from Italy and is only here for a short time while he works on his studies. He had no idea he would see so many animals in one weekend!

After a quick drive around Canberra, we headed home tired but satisfied with knowing we had climbed one of the ACT’s more difficult mountains. Thanks to Hiswaty and Jacopo for coming along and making the trip a lot of fun!