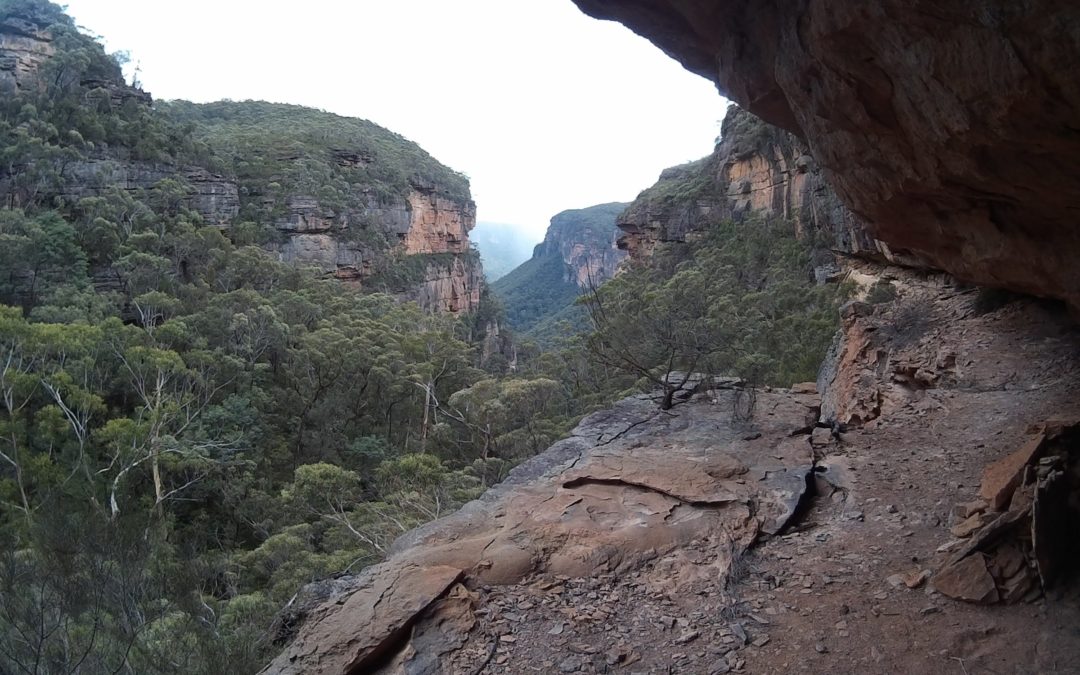 Contrary to the title of this trip, we never even glimpsed or set foot within any of the Bungleboori catchment!

Noone had signed up for Thursday of the trip so I headed off on my own to check out a cool cave that I’d seen whilst exiting Arethusa Canyon earlier in the week.

I started at the Fortress Ridge carpark and followed a scrubby ridge heading West to near the junction of Arethusa and Alpheus Canyon (Lerida Gorge). I managed to choose the correct gully which provided access to a ledge leading to the cool cave. A 40m ledge traverse marked the route to an old rock wall where I found a log book. The cave had a real ‘untouched’ feel to it and I felt compelled to cover my tracks as I went. The entries in the log book were approximately 4 months apart. The name of the cave was revealed to me as Rookery Nook. The highlight of the day was an extract form a 1930’s newspaper which contained one of the most epic adventure tales I’ve ever read! I won’t spoil the story but I’ll reveal that it contained an heroic and truly inspiring solo climb performed by Dr. Dark.

The route down into Lerida Gorge involved a bit of crowd surfing over thick creek scrub and a good cut on my hand from some xanthorrhoea. Just across from where I entered the gorge was another old cave with some stone walls and a fireplace. There isn’t much ‘canyon’ in Lerida Gorge but it is still a nice creek.

I followed a faint foot pad on the true right which led me all the way along the right hand cliffline to an awesome vantage point over the Arethusa-Alpheus Junction. There was a very ominous looking tree at the end! I had some lunch here before descending the rest of Lerida Gorge (via one small, wet abseil) to the Arethusa exit track. I headed back to Mt. Hay Road and walked back around to the Fortress carpark.

That evening I challenged myself to a Jamison Valley night walk starting at Echo Point going down Giant Stairs, along Federal Pass and Landslide, up Golden Stairs, back to Scenic World, down Furber Steps, over to Leura Forest and up Fern Bower. I slept under the stars at Bell Station carpark where I was to meet Ted the next day.

I met Ted who had left Sydney very early to meet me at Bell by 0850. The forecast warned of very heavy showers and thunderstorms all day, but the BOM radar revealed a nice gap in the rain clouds around Newnes Plateau. Thus, rather than my initial plan involving Gateway and/or Nosedive Canyon, I decided to do Tigersnake Canyon which has a rather small catchment.

I somehow managed to lose the blatantly obvious track to the canyon but a quick scrub detour led us right to the very first drop into a tight section of canyon. The drop can be climbed but since this was Ted’s second canyon abseiling trip, I decided to give him a taste of what it’s like to abseil with tight walls on either side. A faggot provided the anchor for the second drop. We had to sit down before going over the edge so as not to lift the faggot anchor. It began to rain lightly as we descended the third pitch and then walked along some open creek. Another slightly awkward abseil took us into the beautiful second part of the canyon.

Lunch was had on a spectacular natural rock arch while we listened to bats and watched the rain and sun pour into the canyon. All too soon we reached the final rockpile where we had a bit of fun in some caves and tunnels under the rocks.

The rain provided some relief as we climbed out but stopped once we were back on top of the pagodas. From here we had a majestic view of the mist rising out of Deanes and Rocky Creek.

We were back at the cars by 3pm so we headed over and walked through the Glow-worm Tunnel and back around via a very nice gorge (Bells Grotto).

On the drive back over Bells Line of Road we stopped and had a quick look at “Cave Hotel” which contains a mix of Aboriginal and European rock carvings.