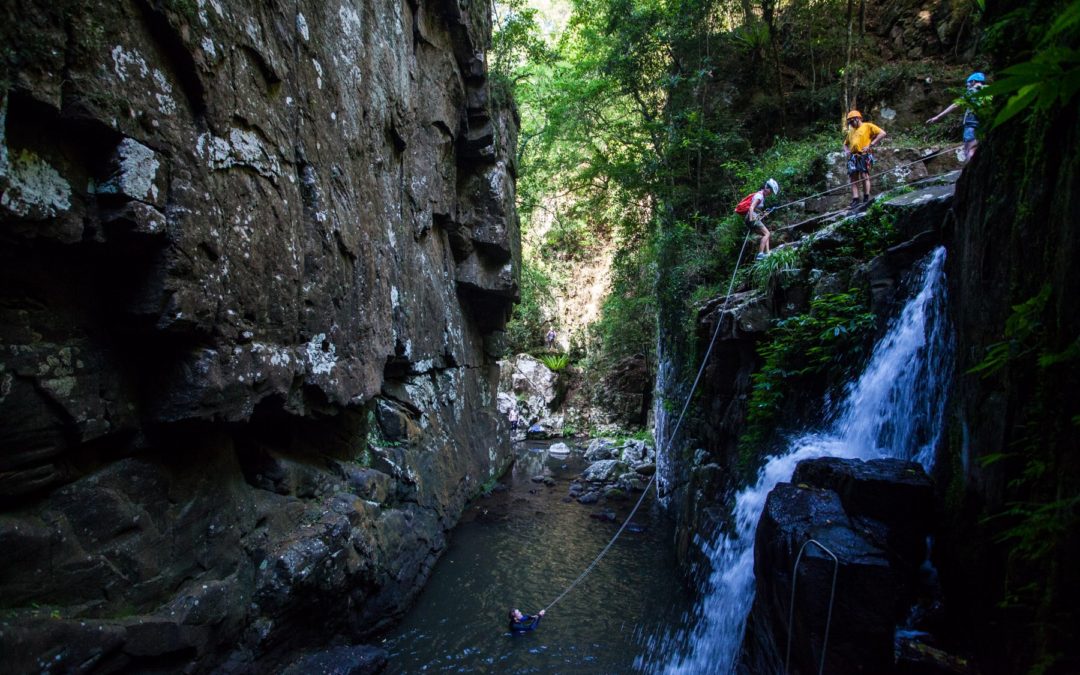 Eighteen people on a beginners canyoning trip sounds pretty demanding, but in fact we only had 11 beginners, with four old lags who volunteered to show people the ropes plus three people who knew the ropes but came along for the ride. Many thanks to one of those, Peter Baxter, who brought some superb camera gear and volunteered to be trip photographer. Some of his images can be accessed here: https://drive.google.com/folderview?id=0B2drKFYCHp7xdGNuUlcwWDBUTlk&usp=sharing

We met at Clover Hill Rd at 10.00 and reached the old farm clearing at around 11.00. Then we harnessed up and followed the goat track down to the Rivulet. There are three short abseils of around 10m in quick succession. Chee and Tim headed down to set up the later abseils, Marty supervised the first abseil and Peter and Paul gave lessons in tying and using an auto-belay, hoping to fill the time before people could abseil. The first abseil can be scrambled around the side of the creek, so people could go round and round doing it again until they were comfortable. It was baking hot and Peter and I were very pleased when we could eventually head down to the next level and get wet!

There are two anchors on the next abseil, which speeded things up, but it was still 1.00 by the time we had everyone down, so we stopped for lunch on the rock platform at the top of the third abseil. The view back to the twin falls and the lush vegetation was beautiful and much admired.

This is the only really canyon-like section, and the third abseil is about 8m vertical into deep water. Some people were comfortable with a self-belay by this point, but others were not and Tim did sterling work bottom-belaying up to his neck in his wetsuit – one of only two wetsuits on the trip. Eventually Chee climbed up and set up a rope from one of the second abseil anchors right to the bottom, as we could run two ropes.

When everyone was down we all did a 3m water jump. We had our only WHS incident here, when someone tossed their their bag down and hit the previous jumper, but they had their helmet on and no harm was done. One or two people were not good swimmers, so we had some ‘lifesavers’ swimming in the pool just in case.

From here it was a very pleasant walk down to the end of the tourist track, where we found the usual group of sunbathers and water jumpers. Some people did the excellent water slide in to the bottom pool, many of us did the 6m waterjump and Tim did the 10m water jump – long enough to write your will on the way down.

We took the direct track back up the ridge to the Clover Hill Rd carpark, which took about 30 minutes and got us back about 5.00. Seven hours for a trip that usually takes one and a half hours, but I think everyone had a great day. All of our beginners were really brave, even those who had done nothing like this before, which made for a great atmosphere. Well done all!