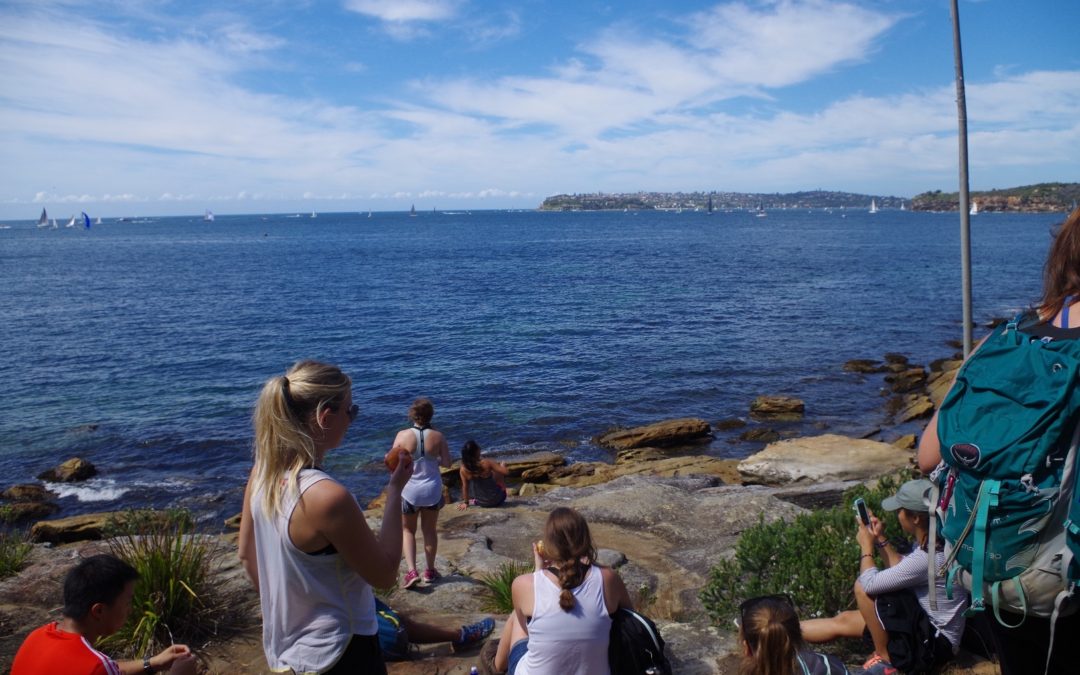 Another walk with a cast of thousands, demonstrating that there are eager people out there wanting to go on walks….

We met together at Circular Quay and set off on the half hour ferry ride to Manly, encountering a bit of a swell crossing the heads. Anne met up with us on the Manly Wharf.

From there it was an uneventful walk along footpaths and streets to North Harbour, where we found that the tide was low enough to cross that sand and mud flats, avoiding a road bash and taking half a km off the walk.
Then it was past Forty Baskets Beach to start the climb on the track up to Dobroyd Head.
Halfway along we deviated to go down the track to Crater Cove and its collection of Depression Era shacks. This track is quite rough and unlike any of the other tracks on this walk.
At Crater Cove we had a morning tea break.

I thought if a bit odd that no one so far had commented on my statement in the walks notice that there would be lots of dragons. Apparently some of the walkers thought that I was just having a joke…until the first Dragon appeared at Crater Cove. It was quickly followed by four others including a rather large one who came to check us out. One showed a great interest in Lena’s sandwich and made a run for it, with Lena instinctively jumping back (they look scary but are quite harmless).

After a break entertaining the Dragons, we returned via the rough track to the main track at Dobroyd. As it is being upgraded it was lined with what looked like large shopping bags full of sandstone blocks. As the day was starting to heat up we passed quickly through this section which through high scrub and offers little shade. It also doesn’t get much of a breeze so can get stiflingly hot.
At last we reached the lightly forested section near Castle Rock and then went down to the beach there to have lunch. As the day was very warm there were lots of people there so we only stayed long enough to eat lunch. We climbed a rock to get a perch above the crowd. I made a mental note to go a couple of hundred metres along the track to another beach which, I noticed later, was much less crowded.

Then it was back along the track to Clontarf, noted for its beach as well as the Northern Sewer Pumping Station (cleverly disguised as an Ancient Egyptian monument), and also where an Irishman tried to assassinate Prince Alfred, Queen Victoria’s second son, in 1868. Advantage was taken of the loos there as well as the water taps. This is the halfway point if you are walking all the way to Taronga.

Then we continued onto the Spit Bridge via a track which partly follows the old Manly Tramline, hence the railway ballast underfoot on this section. On the Bridge we encountered a quite strong breeze which was also welcomely cool on this quite warm day. We got this sea-breeze for the rest of the walk. At The Spit, Megh and one other left us to get a bus from there back to the City, and the remaining 14 of us set off around the Southern Sewer pumping station, also, like its Clontarf counterpart, cleverly disguised as an Ancient Egyptian monument.

From there it was along the unnamed beach which is only uncovered at low tide (as it was this day) to get to Chinaman’s Beach. Along the way I had an impromptu stop to give First Aid to a small girl who had cut her ankle on the sharp Oyster shells there. I was aided by her two sisters (future doctors maybe?). Her mother was on a nearby cruiser, and came off the boat and was appreciative of the assistance.

It’s a warning to be careful walking on the rocks in this area, some of which have razor-sharp shells attached to them.

From Chinamans Beach it is an unavoidable road bash to Balmoral Beach. here 6 of the group left for the bus back to the City, as some had Uni work to finish off that evening. the remaining 8 of us then had a break and a well deserved dip in the water. This was at 14km along the walk.
Then we set off along the track up Laurie Plunkett reserve, which is the old Balmoral tramline right of way. It goes through a cutting which, once inside it, closes off any notion that we are in the middle of suburbia. This track is more easily graded than the “official” track to Middle Head, as it was after all graded for trams to climb up to Middle Head road. It adds only about 200m to the walk but also includes a road bash along Middle Head Road as far the the Army Barracks, through which a detour is made to rejoin the track to Chowder Bay.
After Chowder Bay it is a walk through bushland (where we saw the only turkey) to Bradley’s Head with its HMAS Sydney mast and memorial, and more recently, little plaques commemorating the “Scrap Iron Flotilla”. (History note: Google the term, and you will be surprised where that name came from – hint: originated in Germany).

After a rest there, we continued along the track down to the wharf at Taronga, where Emma go her bus to Mosman, and the remaining seven, having now covered 20km, rested our feet for the ferry ride back to Circular Quay.

This wan enjoyable walk in quite warm weather with shaded sections where and when we needed it. Everyone seemed to like it and had a good time.