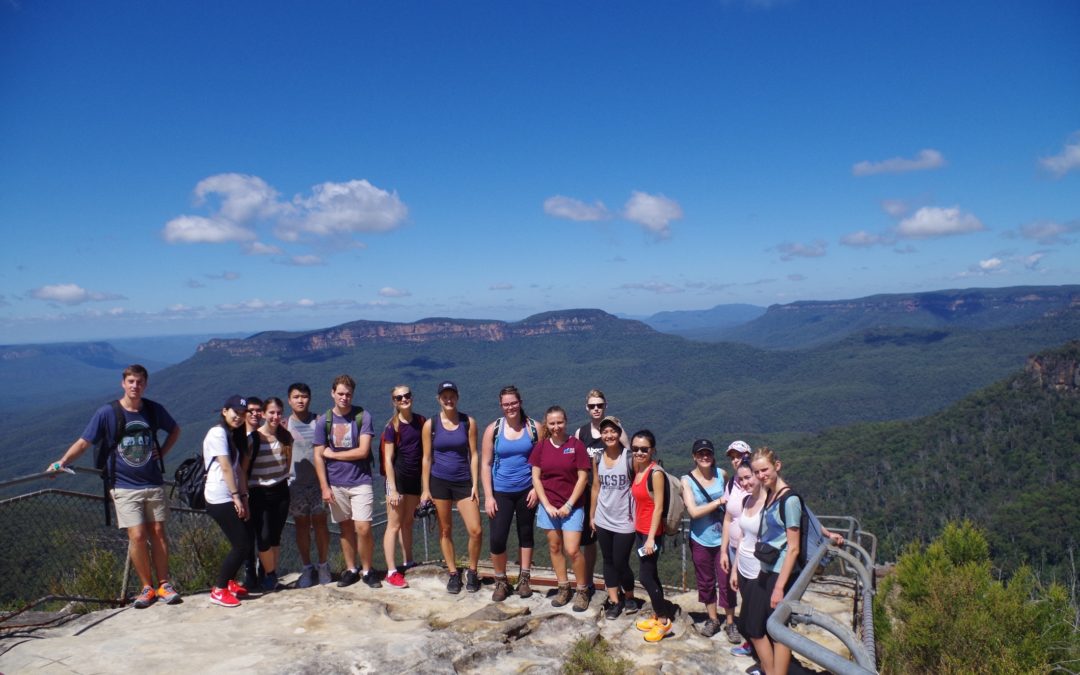 A great roll up for the new member walk, 16 brand new members with only two Existing members, myself and Cathie (who was back up person, pre-arranged before O Week).

And not a single “no show”!

Even though almost everyone had met up at Central Station 8 minutes before train departure, Almost all of us found it impossible to get a seat on this 4 car train. This meant 16 people standing all the way on the 2 hour trip to Leura! Brendan joined us at Granville and Lewis at Springwood.

On reaching Leura we found we had a nice fine day, not too hot under a clear sky.

So, once at Leura we set off towards Lone Pine Avenue, via a loo stop at Leura shops, and then proceeded along Lyrebird Dell track. This track is rather rough and eroded and mostly not in good repair, but still it went through the small valley of Gordon Creek, which it follows. It eventually led to the Pool of Siloam, where there were a couple of families with small children taking advantage of the pool.

From there we went to Gordon Falls Lookout via what I call the “never-ending steps” because they seem like it. On descending to the Lookout we had a grand vista over Jamison Valley, and Mount Solitary. It was quite a revelation to the 8 walkers who had never been to the Blue Mountains before this.

From there we continued along the Cliff Walk via the no-longer-dangerous bridge to Elysian Rock, where we had a group photo with the grand view of Mt Solitary as background, and a deep blue sky.

Everyone on the walk chatted quietly among themselves, all the better to hear bird sounds and the bubbling streams. The virtue of talking quietly on bushwalks was emphatically demonstrated as, on entering the natural amphitheatre at the Top of Leura Cascades, we could hear from a quarter kilometre away loud voices coming from a tour group further along the track. It really disturbed the atmosphere. We eventually came across them and were astonished to find that the noise was coming just from 2-3 loud people – the rest were having their lunch.

Once rounding the other end of the amphitheatre the sound dissipated fortunately, and we the got to the junction of Cliff Walk and Federal Pass, which descends along Leura Creek past the Cascades. We stopped at the Grotto there foor a view, and then descended to the base of Leura Falls via a series of metal steps (not steep ladders like Slacks Stairs or Sublime Point, Austinmer).

We had a photostop here with many of the group posing against the Falls.

Then is was further down passing Lila Falls, until we encountered a loop bypass track branching off (and rejoining) Federal pass. here we had lunch as it was nicely shaded and, unlike Leura Forest further on, is free of leeches.

After lunch, we rejoined the Federal Pass, and proceeded through Leura Forest where there were some groups picnicking – we didn’t check them for leeches,a nd in fact the ground looked rather dry. Even so I still wouldn’t have lunch there….
I found the start of Dardanelles Pass, which is easily missed as its signpost is not located on Federal Pass. We continued along this undulating walk, accompanied (at first) by the tinkling sounds of Bellbirds. Then I heard what at first could be mistaken for a Currawong or a Bower Bird. I realised it couldn’t be both, so it had to be that expert at mimicry, the Lyrebird. Sure enough, there was a male Lyrebird scratching around in the leaf litter and giving out a variety of bird sounds. It was hard to spot initially, and indeed if it wasn’t for its call would have been overlooked. Just shows what great camouflage is its dark brown colour.

After stopping to admire it, we continued on until getting to the base of the Giant Staircase (reputedly the steepest in the Blue Mountains with 900 steps). Seated at it base were a small group with doof doof music playing quietly (thank goodness).
From there it was to the base of Furber Steps, and we began the steep climb up (it is considered the third steepest Blue Mountains steps). It was unforgiving as usual, but eventually we made it to the top. At one point one person asked was it possible to do the short side track to Katoomba Falls, but as there was already a large (and noisy) group there already, it just wasn’t worthwhile.

On reaching the junction where there is a choice of a left turn to Scenic World, and a right turn to the Kiosk at the head of Prince Henry walk, I found that four of our more nimble walkers, having got ahead, were not there. I had already indicated my intention to get the bus from Scenic World to Katoomba Station, eliminating a boring road bash, so I hoped that they had gone ahead of us to there. But 10 minutes later I got a call from Marie that they were at the Kiosk, so I told them to just catch the next bus from there back to Katoomba.

Bushwalk lesson: always wait at track junctions if you get ahead of the others.

So we reached (or rather encountered) Scenic World, to find hordes of tourists there. It has been redesigned so that the cafe serving coffee and ice cream and drinks id no longer in an annex outside, but to buy drinks and ice cream you have to go inside and negotiate the long lines of tour groups and souvenir displays. At least though they have nice toilets.
Then we all reassembled at the usual bus stop for the 3.30pm bus to Katoomba. 3.30pm came and went without a bus. Then Cherie drew our attention to a sign at the bus stop stating it was temporarily related “to Violet Street”. This was confusing as Scenic World is on Violet Street. So where was the “relocated” stop? We eventually found it on the other side of Cliff Drive. Luckily there was a 15 minute bus service this day – something to do with a “convention’ (didn’t find out what) so we didn’t have to wait too long for the next bus. A Spanish lady (not one of our group) had a go at the bus driver about the confusing sign.
Still, it meant we got to Katoomba with plenty of time for the train, instead of having to rush from bus stop to the Station.
Fortunately we could all sit together on the way back to Sydney as the train was not so crowded at Katoomba.

Everyone seemed to have a good time and enjoyed the walk.