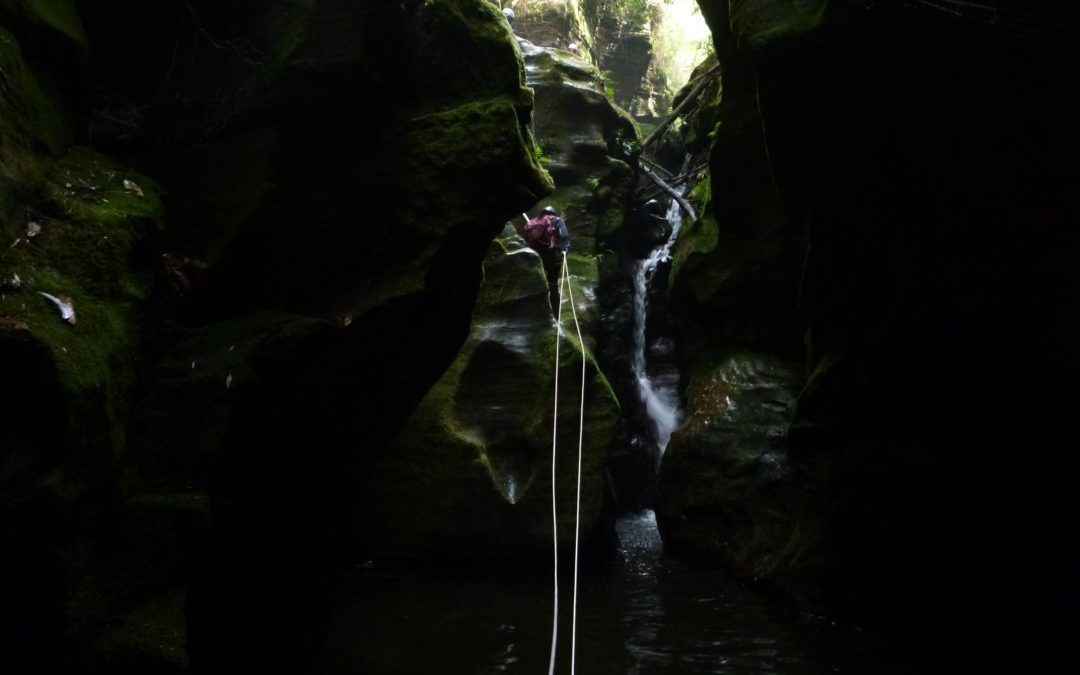 With the weather forecast being partly cloudy with a slight chance of showers and this trip being my first time leading a SUBW trip I decided we would do some of the easy to moderate graded canyons at Mt Wilson. We met at 8am at the Cathedral of Ferns campground; there were a total of 5 of us for the sat canyon. Tony caught a lift with Flint, Isabelle, Michael and myself all drove up ourselves.

Once everyone had gathered at the Cathedral of Ferns we decided to set up our tents in the morning to claim a spot for the night. Luckily we did as all the campsites were taken once we came back from the canyon.

On sat the 5 of us split into two vehicles and drove to the clearing next to a fire trail which is the starting point to get to lower Bowen’s creek north canyon. Once all our gear was organised we then set off at a leisurely pace down the fire trail to the termite mound marking the track down into the gully.  A group of canyon cyclists whizzed past us on their mountain bikes missing the turn off track into Bowen’s creek. They later caught up to us in the canyon just as we had finished putting on our wetsuits and abseiling gear and again at the first abseil so we let them overtake us.

There are 3 abseils in the Lower Bowen’s Creek North Canyon everyone managed to get through them safely with only some minor pendulum rope swinging on the second abseil towards the bottom. This because if you abseil to the left of the anchor like we all did, the gravitational pull of the rope wants to go towards the centre of the rock face which is why we did a small swing near the waterfall at the bottom.

There were a couple of fun swimming sections at the bottom of each abseil in the canyon for us to go through. Once we completed the final abseil the canyon opens up into another beautiful section to go through that ends up joining the junction of South Bowens’ creek.

We had some wildlife pay us a visit when we were greeted by a large Crayfish whilst having lunch where Tony wanted a selfie. Once our break was over we decided to head upstream a few hundred metres to explore some of the South Bowen’s creek canyon and found a nice spot for a water jump on the way back to our exit track. We all had a go at the 3m water jump with some photo bombing going on as well.

I noticed on our exit the amount of fixed ropes in place that weren’t there the previous times I done this exit. I assumed a guiding company would have put them in place at some point. Upon arriving at the cars we gathered some firewood for a campfire and head back to camp. We bid farewell to Isabelle who could only do the canyon on Saturday. After dinner we had an early night once the rains came in.

During the night I could hear the rain coming and going on my tent and was pondering which canyon would be ideal to visit if the rain decided to set in. Upon waking up to a misty slightly drizzling morning we decided to wait to see whether the weather would improve as the forecast was meant to be a fine day for sun. A decision was made to stick to the original Sunday canyon Du Faur Creek Canyon.

Once we packed up camp we set off at 10:00am and parked at the Mt Wilson Fire Brigade shed where one of the guides told me that this particular weekend was the festival of canyons.

This was my first time doing this canyon and I thought it would make a nice relaxing trip for us on the Sunday. We set off at a leisurely place checking the most obvious looking tracks to the right described in the Rick Jamison guidebook. The tracks into the canyon are open and easy to follow and there is only one down climb of about 6 metres but there are fixed ropes in place.

Upon arriving at Du Faur’s we changed into our wetsuits and myself, Tony & Flint inflated our lilos. Michael opted to swim the deep pool sections with flotation in his pack. Not far from our entry we came to first of a couple of nice canyon restrictions with some deep pools to float or swim through.

We had a look up each little side canyon whilst heading downstream and upon visiting the first little side canyon found a large crayfish that would have been about 40cm in length. It gave us the usual canyon greeting of pincers raised in the air when it saw us so we let it be and continued on our way. We stopped for lunch on a sandy beach about halfway through the canyon where the canyon takes a sharp bend to the left. Since we started a bit later I wanted to exit via Joe’s canyon. I was expected it to be a wide canyon about the same width as Du Faur. Upon investigating it further upstream I realised it was the exit point and we all packed up our gear heading through Joe’s canyon. Towards the end of the canyon constriction of Joe’s canyon there is a little climb up a log leaning against a boulder or else if you can fit slide yourself through the gap between the boulder and rock wall. Myself and Flint managed to squeeze ourselves through and Tony and Michael climbed over.

Not far from the end of the canyon we took the foot track up the gully to the main Wollangambe one entrance track back to our cars.

We had fine weather for the both days of canyoning.