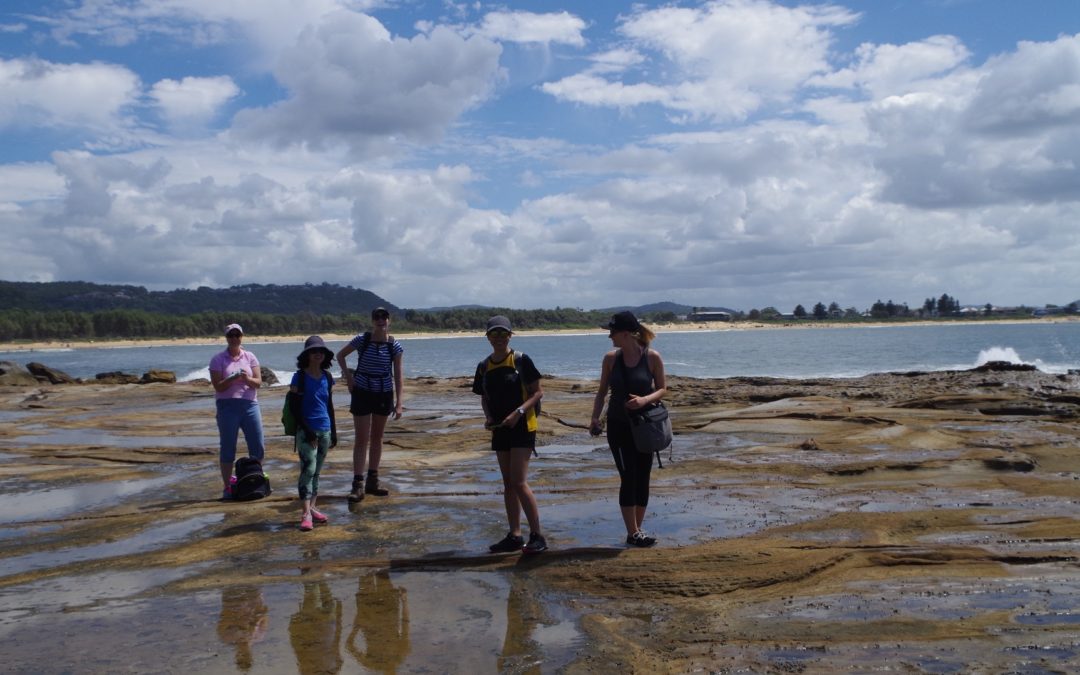 Jennifer and myself arrived with our cars at Woy Woy Station and met up with Cathie Emma and Maricar. Marie was running late due to her infrequent bus service, and as the next train she was on was only 20 minutes behind, we decided in the meantime to take a walk around the Woy Woy waterfront. here we saw several Pelicans sitting on top of telegraph poles which is their habit there.

After collecting Marie we set off in the cars to the south end of Umina Beach. No parking spots were available there so we went down the street a 100 metres or so and found parking spots in shade on a side street (better than at the beach).

We then walked along the rock platform and noted that the sea was a bit rough with waves breaking on the rock shelf. Marie posed for a photo at a safe distance from the edge – not wanting to get washed in by a sudden wave! (Happens too often on coastal rock shelves). Then it was a rock scramble to the track which leads under the cliffs of Mt Ettalong to the north end of Pearl Beach.

From there it was a walk along the beach to Pearl Beach shops then a road bash to Crommelin Arboretum (next door to the Sydney Uni research station). Emily posed “hiding” behind a Burrawang plant – a Cycad which has been unchanged since the time of the dinosaurs. We took a break in this shady spot with its tall palms and a Magpie spotted us and came down to beg for food off Emily.

After the break we headed up along the fire trail to Warrah Lookout, and enjoyed the view of Broken bay, Patonga, and Palm Beach (where “Home and Away” is filmed).
Then the track joined the Great North walk to descend to Patonga, At first through scrub,then through woodland. Just as we were going through the scrub Maricar suddenly turned back as she saw what she called a “baby crocodile”. It turned out to be a Goanna which unfortunately refused to hang round to be photographed. The track eventually dropped down steeply to Patonga, where we walked along the waterfront to the fish and chips cafe where we had lunch. Most of us opted to take advantage of the local fish meal on offer. I pointed out that although there is a nice beach at Patonga, that note b\that no one was swimming there. It’s because it’s an estuarine beach of the Hawkesbury River and therefore quite possible to have sharks in the water. Even so, we saw a few water turkeys on jet skis disturbing the atmosphere of the bay.

After lunch we retraced our steps to Pearl Beach’s south end (bypassing the Arboretum) and rested there while Emily, Marie and myself had a swim. The water was quite nice and Maria (from Germany) remarked that it is much warmer water than the North Sea beaches! Then we considered how to get back to Umina and the cars. The problem was that the time was coming in which would make foreshore rock-hopping the way we cam a problem and potentially unsafe. The track at the north end of Pearl Beach ends up at the main road (it was once actually a part of it) meaning a road bash without a footpath and regular traffic – also not safe. The decision then was to catch the 4.20pm bus back to the cars (the only sunday afternoon bus from Pearl Beach). This we did and we got back to the cars – still in shade – and then drove to Woy Woy Station. Cathie, Maricar and Marie only had a short wait for the fast train back to Sydney but Emily had a bit of a longer wait for the hourly Newcastle train.

This was a nice trip in nice sunny weather – not too hot. It is also the ONLY walk that I know of where there is a cafe half way through the walk to have lunch!
And no “no shows”, either.