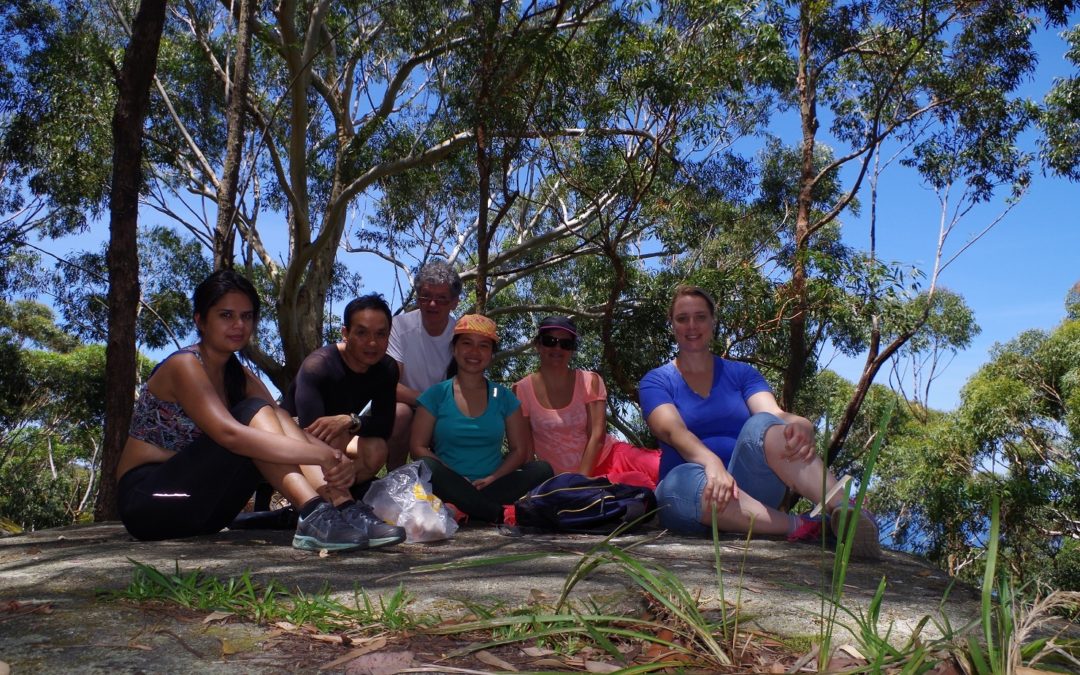 As I expected the walk to not take too long, I decided that we could all sleep in a bit and get the 9.25am South Coast train from Central to our destination, Stanwell Park. BUT, there was a problem: the 9.29am train does not stop at Stanwell park – I had completely overlooked that the South Coast Line has only a measly 2 hourly service to the “smaller” stations on that line! Therefore, I decided that we should go to Thirroul and then catch a north-bound train from there back to Stanwell Park – it would mean being 45 minutes late for the walk start and not an hour late.

But then a good alternate plan emerged; I decided we should get off at Helensburgh, look inside Metropolitan Tunnel with its Glow worms, and then return to Helensburgh Station for the next train.

So we got off at Helensburgh and walked the short distance first to Helensburgh Tunnel. We couldn’t enter it as it was locked, so we crossed the road to Metropolitan Tunnel. Noticed that the Old Helensburgh Station sign was back up, and graffiti removed from the tunnel, so evidently a local community group is looking after it.
We entered the tunnel (closed to trains since 1915), which was damp and muddy underfoot – although a bit drier than normal. We all kept quiet and used little torches and headlamps, which were just enough to enable us to see our way into the tunnel. As we went deeper the Glow worms became evident and with the lights off we could see them covering the ceiling of the tunnel.
Yet, as our eyes became accustomed to the dark we started to notice the weak light from outside streaming into the tunnel from its entrance.
After enjoying the Glow worms we exited the same way (the southern end is blocked as it forms part of a dam for the nearby Colliery).

Then it was back to Helensburgh Station for the next train to Stanwell Park. We didn’t have to wait long as we had spent almost an hour exploring the Tunnel and its surrounds.
At Stanwell Park we went under the station subway to find the start of the Wodi Wodi Track on Platform 1. Another group were right behind us but they intended to do the whole of the Wodi Wodi Track whereas we were going to branch off after about 500 metres to climb to Stanwell Tops. So, we climbed up the first part of the Wodi Wodi Track (noting the warning at the start about the legendary Austinmer Panther – which can only be seen after about 7 or 8 schooners…). Then a track branches off to the right to continue the climb upward. At some point an ant or wasp stung me on my leg so a stop to put cream on it was required. Whatever it was had managed to sting me through the cloth of my shorts! By continuing to take righ turns at several track junctions (none of which are signposted) we eventually came to a spot overlooking Stanwell park with an imperfect view through the trees. Here it could be seen how the cliff face is gradually separating from the Illawarra Escarpment – a landslide in the making.

Then we continued along the track, passing a cliff edge that Tony recognised as an abseiling spot the Club had been to a couple of years back. Then across Hargraves Creek – and suddenly we were in suburbia – Stanwell Tops. We walked down Longview Crescent to Stanwell Tops Lookout, which has signs saying unsafe cliff edge. Then we retraced our steps on the track over Hargraves Creek, and took a right turn on a branch track to see where it went (it was an exploratory walk after all). It went along for a while until reaching a firly wide trail which was likely a fire trail. then left dwn this and then left down another track which should take us back to the track we camr up on – which it did. All these are unsignposted except the last junction which has a sigle sign saying “beach”. Then we found a nice shady spot to have lunch.

After lunch we descended the way we had come to return to Stanwell park Station and then down to Stanwell Park beach via a path behind Station street (access via Watergum Grove, turn right at the CWA hut).

At Stanwell park Beach we rested and Lilian, Tony and I had a swim while Cathie, Lisanlu and Gunika soaked up the sun. The water was quite cold, as it tends to be until late December.

After our swim we exited the north end of the beach to go to Otford Tunnel, and I noticed a promising short but steep track up the cliff which would be a handy shortcut, so we climbed it. Well, not quite all; Tony and Lilian became engrossed in chatting (“about sport”, Tony said), and missed the cliff track and went straight ahead. Minutes later I got a phone call from Tony asking where we were. A couple of directions got them back on the right track. Then we took a path which took us for a short distance cross country from The Drive to Chello Dene Avenue, which was actually the old railway line until 1920. (Chellow Dene Avenue is blocked to traffic at this point).

Otford Tunnel is 1.6km long and was closed in 1920. It was long used as a mushroom farm which is why it has no Glow worms. It is on a 1 in 40 grade and notorious for the smoke of the steam trains accumulating in the tunnel, especially if a southerly wind was blowing. Things were not helped by the curve at its southern end which would have slowed the wind down so that it matched the speed of a train – and its smoke – climbing the grade!

We encountered the heavily-graffitied southern portal to Otford tunnel, which has an old grille at the entrance but no longer with a gate. We entered and at first could not see the northern entrance as the tunnel has a curve at this end as well as an internal square concrete portal to repair the place where the tunnel was blown down during World War 2 to stop the Japanese using it to access the main railway at Otford. (History lesson: Few people realise that the only enemy troops to land on the Australian Mainland in WW2 were not Japanese but German, and they were shipwrecked sailors).

We went a few hundred metres into the tunnel, and eventually could see a speck of light at the northern end which was its exit at Otford. There, a decision had to be made: continue on and hope that we could exit the northern end OK to walk to Otford Station, or turn back to Stanwell park. Although some local we met told Lilian it is possible to exit to Otford, it is known that the exit there is very overgrown and not at all obvious to a newcomer. If this turned out to be the case, it meant turning back long the entire 1.6km of tunnel back to Stanwell park and having to get the 7.11pm train back- a lot later than was planned. So it was decided to go back to Stanwell park by the way we had come to the beach. The elusive Otford Tunnel will have to await another trip for a full exploration.

We got to the corner cafe there 15 minutes before train time, and with less than 1 km to the station (although uphill) I decided there was just enough time to order a coffee and the girls to get ice creams. After we got our coffee and ice creams there was just 8 minutes to train time, and I gave the cue for everyone to move on to the station. it was then I discovered that Tony had put in an order for cooked chips and he was still waiting for it! I expressed my dismay with a single word, and Tony then said, don’t worry, I will just have to go later (remember, trains were only one every 2 hours). So we took off for the station arriving with just three minutes to spare. Tony had got his order and caught up.

Later, Tony explained that he thought his order would be filled in just 2-4 minutes! Welcome to the world of small town cafés, Tony! No production line food like at Maccas or KFC here. Waiting 10 minutes for a fish’n’çhips order is normal in small town cafés. (At Merriwa for example you order your hamburger then sit for 15 minutes while they cook it – and they’re a lot tastier than at Maccas).

Anyway we got the train back to Sydney OK (Cathie getting off at Sutherland) although we got separated as the train was so crowded so couldn’t sit together.

Everyone enjoyed the day.
(An no “no shows” either).

See you all for exciting trips in the New Year!