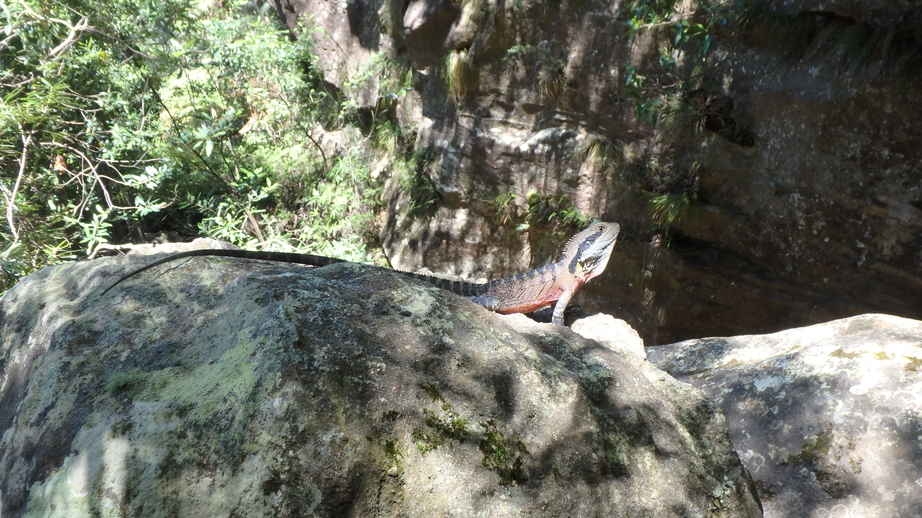 We arrived at the Newnes campground on Friday late in the evening after seeing too many Wombats and Kangaroos. On Saturday morning John joined us after sleeping a few hours on the way to Newnes.

We left the camp early to enjoy the climb while the air was still fresh. Everyone was happy to be at the top of the pipeline track before 8.15am and we enjoyed the lookout for almost a hour. The sky was blue, the air was still and the sun was enjoyable.

At the first abseil one person decided to put his wetsuit then one after each other we all put our wetsuit or spring suit before to abseil, I can now say that was a mistake. The first abseil was down a deep and narrow slot in 2 stages with different options to ridge anchors. We then walked in this slot on a dry and sandy bottom for a short period before the creek opened up.

After more than 30 minutes of dry creek walking with the bottom half of our wet suit and the day getting hotter we finally came to a small pool that we couldn’t avoid. 2 happily jumped in it while the others down climbed it, a bit more than waste deep. The water was clear but stank in this area. From there the walls closed on us and it became wet with a few short swims. The final mandatory abseil came too soon but drop into an impressive, deep and long canyon section.

We did the last optional abseil using two 50m ropes but it could be done with only one 50m and use another anchor on a log half way. We had lunch at the bottom of our last abseil before to do a very hot and dry walk back to camp. We cooled down in the Wolgan while Jack drove back to Sydney. Later that afternoon we put a slackline and everyone had a few go.

The next morning we started a bit later, at 7.20am. This time the pipeline track seem to be longer and harder than the previous day. We only stopped at the top for a quick drink as we had many rests during the climb. Later, we arrived at the end of the ridge for our canyon and climbed a pagoda to confirm we were in the good system as our creek wasn’t following the bearing of the map. From this high point we saw that the canyon would start about 200 meters further down and it was going in the good direction.

We did the first optional abseil which can be walked on the right hand side and at 10.20am we arrived at the first mandatory abseil. That day we didn’t bother with thermal or wetsuit as the day was hot and the canyon mostly dry. Abseils were very close to each others and having a few ropes helped to speed up the process. The canyon opened for a while where we did 2 short abseils and one slide on a log. The next abseil was interesting with a right then a left turn in the constriction, we didn’t have any issue to get the rope back. The next drop was only a few meters further from a nut and a bolt.

The last abseil raised some questions, you have a tree a few meters back with slings around but some one added 2 long slings from the tree to the top of the abseil. We saw the tear on the slings from people directly putting ropes through them. The slings should only be used to attach your cow tail to access the anchor from a chock stone on the right. From this anchor the drop is probably 27 meters and the bottom is the only place where you must get wet, waist deep.

We had lunch at the bottom of the abseil before to follow the cliff line, pass the last abseil of pipeline canyon and joined the Pipeline track. On the way back we saw two fatcanyoners enjoying the water of the Wolgan while we still had another 30 minutes to walk. The car was too hot and so we went for a quick dip before to drive back to Sydney.