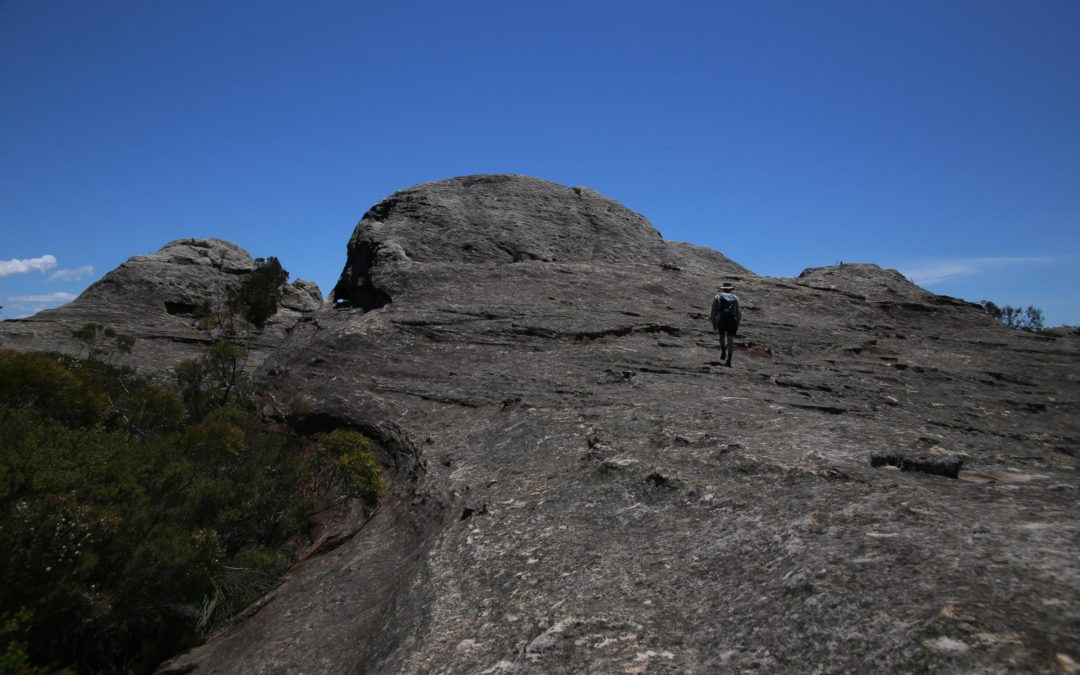 Bonnum Pic is an unusual mountain with an unusual name. Noted on an expedition across the Blue Mountains by Francis Barrallier in 1802, he described it as “a mountain very remarkable on account of its pyramidal form”. And indeed it is. It’s a strange promontory of craggy rock pointing for several kilometres toward the Warrangamba Dam near the Wollondilly River, in the Nattai National Park. At it’s end, it becomes a knife edged rocky  ridge, about 20m wide with (maybe) 150m high cliffs on 3 sides. Too good to miss!

Although I have been put off for many years by the concern that it was difficult to access, it was not all that hard at all really. Most of the walking is on undulating ground with no big climbs. It’s a good longish day walk. But of course there is a catch! The track fades after about 2.5km and then becomes a navigational exercise with careful observation needed to follow the faint and  overgrown route all the way to the end of the Pic. Although we were only a party of 2, I later found out that 2 more members had emailed me at 12am Friday night requesting to sign up! Sadly I got the message too late..(Sorry people, but I don’t normally check my email at 6am!), so they missed out, so there is a message to prospective walkers, do try and give more notice than that to join a walk!

So, at about 10am Damon and I set off from the start of the track , off a farm road about 25km out from Mittagong. Signage from NPWS confirmed the trail head, and my fears of not finding the beginning of the track were put to rest. Although this is not really a popular walk, we were surprised when a group of 21 walkers from “Sydney Explorers” showed up. They had changed plans from doing another walk in Morton National Park. They were friendly enough, but their large party meant we were better off leaving them behind us, and after an hour or so, we were quite a distance ahead. They never made it all the way out to the end.

It was a great day to walk, although it got pretty hot later on, maybe 27C?  I wouldn’t recommend doing it in warmer weather than that, as there is a lot of exposed rock which makes the place bake. The trail was fairly easy to follow until the lookout over the Wollondilly Valley. Then it turned from west to north, over interesting rock domes with wind caves in them.  Then the route needed constant attention, as sometimes the markers were not easy to spot, but as a rule of thumb, you just needed to stay west toward the cliff lines to find it again. Needless to say the views all the way were superb.

About 2 hours into the walk, the route dipped into a shady gully where you dropped off an escarpment past a little camping cave. In winter there looks like there might be a running stream there, but not so in summer. Then the way became a bit more technical with boulder scrambles needed to gain the main peak. Care had to be taken as a fall could be fatal, there were a lot of big drop offs around!

A hot and sweaty climb saw us gain the Pic summit at around 1.45pm. The views in all directions were fantastic!  Damon took the challenge of getting right out to the end “lump” beyond the summit,  which involves getting down a steep rocky ramp onto a ledge . The catch is if you make a mistake on either side of it, there is about 150m of air below!  Well that’s my guess, I was a bit overheated and feeling somewhat washed out, so I wasn’t about to try. I set up a rope for his return, he reported another spot on the “lump” where there was a half metre crossing with more drops on both sides. But if you are looking for thrills, this is your spot!

After some lunch we headed back home. The heat of the day had really kicked in by now, and our water supplies began running low. A cold lemon drink is all I could think of now! Even though we took care, we still lost the way a few times,  but soon found it just as easily. After exploring a few of the domes and wind caves, we wandered back along the trail. I then thought of taking an easier route following  a farm fenceline, but (of course) this turned out to be trickier than expected. We had to crawl through at least 3 barbed wire fences to get back to the cars!  My advice? Just take the NPWS route through the gully!

We got back to the cars by 5.30pm. The other group were long gone.  But we enjoyed a well made local Portugese Hamburger and that wonderful cold lemon Solo in Mittagong before heading back to Sydney.

It’s a great place that I would like to go back to, but in cooler weather next time!