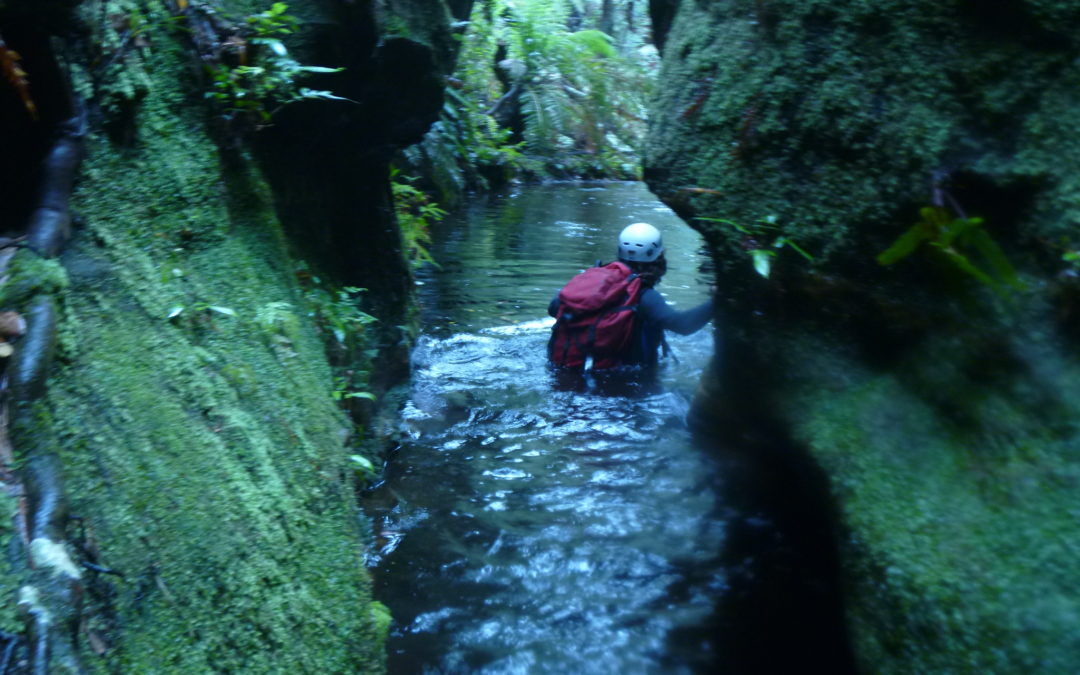 Leo collected Adrian from Redfern Friday at 3pm ….. and as a harbinger for Leo’s ambitious plans for the weekend, they crawled bumper to bumper on the M4 to Penrith. Leo had evidently not cleared his plans with Huey, and after heavy rain through Katoomba, dinner at the Imperial Hotel http://www.hotelimperial.com.au/ seemed a good compromise. The rain cleared leaving magnificent twilight cloud formations on the drive to our camp at the Mt Galah carpark. Tony & Pierrette rolled in after midnight.

On Saturday we left shortly after Felix arrived on time at 6am. Felix’s even more ambitious Barrington Tops trip had fallen apart once he realized the clear skies of Salisbury (North Carolina) could not compete against the forecast thunder storms of miniscule Salisbury (NSW). We set up our tents at 485161 on the ridge top NE of 1014 and by 8.15 were pushing north with daypacks towards Galah Canyon. We donned wetsuits for the series of waist deep wades, water jumps and slides before we reached our first abseil, down a small waterfall, at 9.45. There may have been a fixed rope there in the past, but not now. 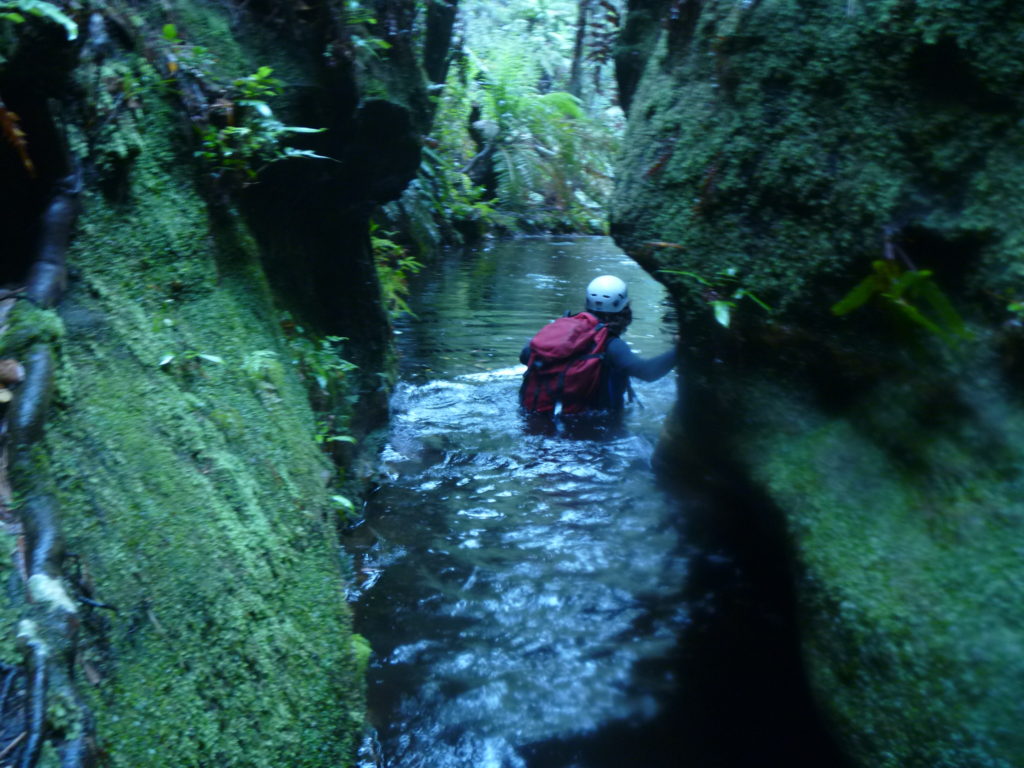 There is a long walk through coachwoods, over fallen tree trunks and down slabs of slippery rock until the big abseil, which we reached at 10.30. We failed to notice in time the best abseil, down a gully on the left to a tree below us, from which it is some 20m to the bottom. Instead, Felix abseiled from the big tree to the rebelay point across a large chockstone. The mere mortals did not take kindly to this, and abseiled the full 30m on single strand past the chockstone, and Leo concluded by making his way over the top of the chockstone to descend from the rebelay point, facilitating the collection of our 2 ropes. There followed a slippery log abseil, and an awkward start from a chockstone abseil, where Pierette chose to demonstrate how one gets one’s foot jammed above one’s head, and then extricates one self. The rest of us puzzled over the purpose of this move, but conceded such training could be useful. We took some time to find the final belay point – a sling with figure 8 about 4m back from the abseil, but well under water and disturbed almost by chance. 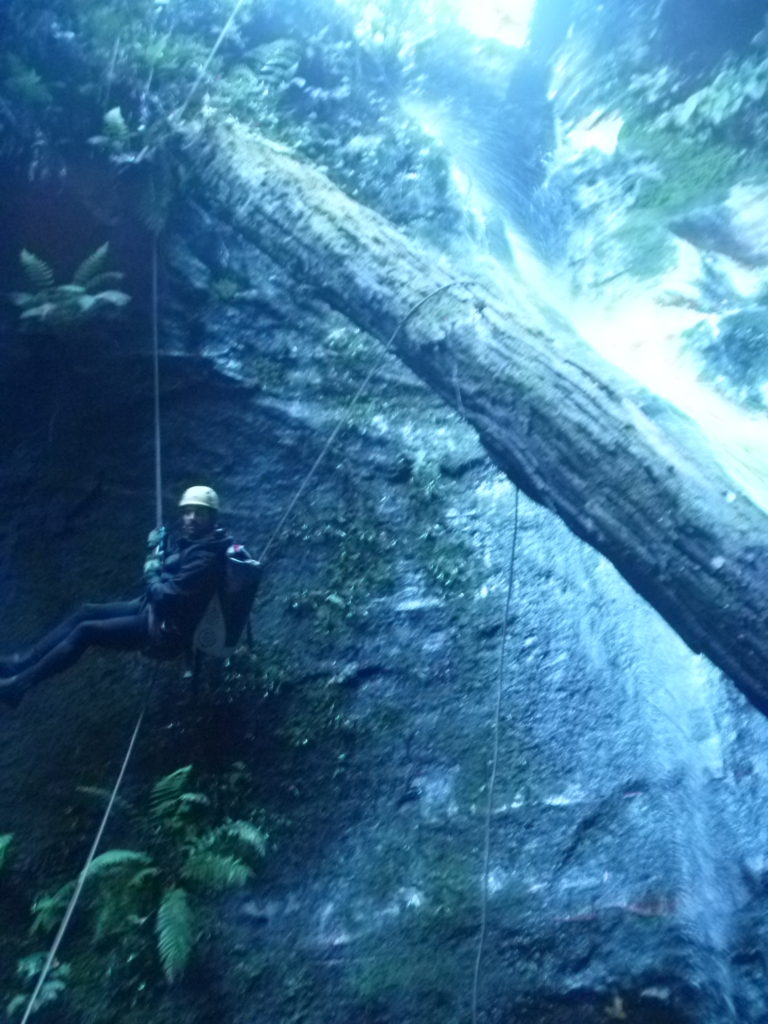 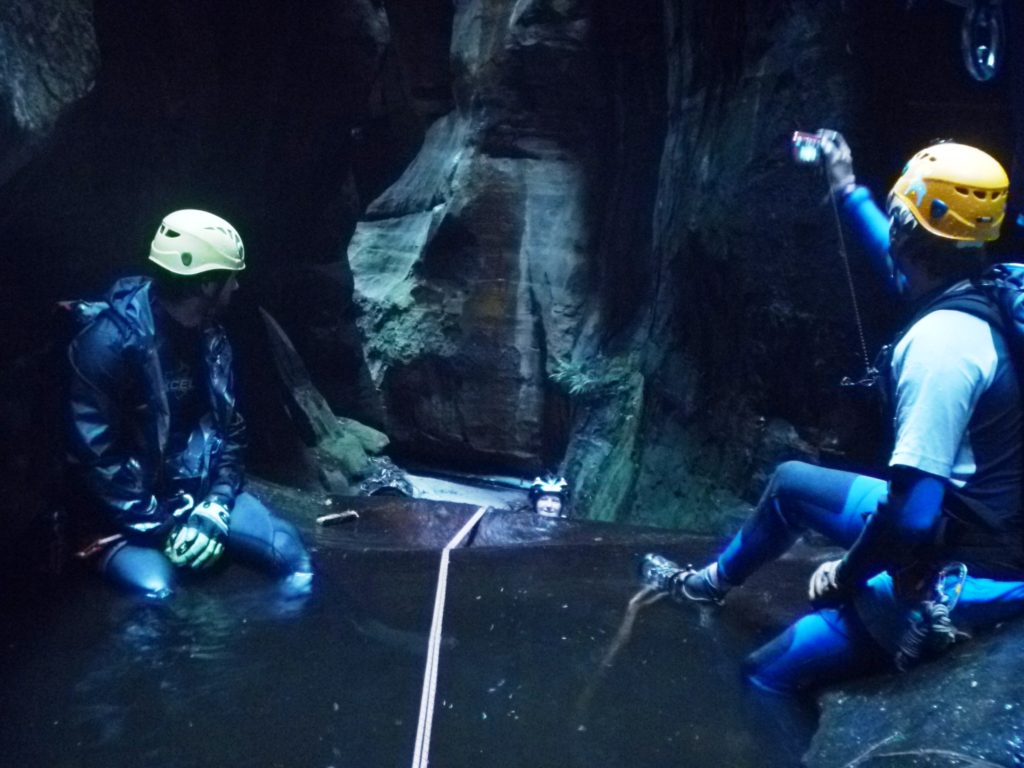 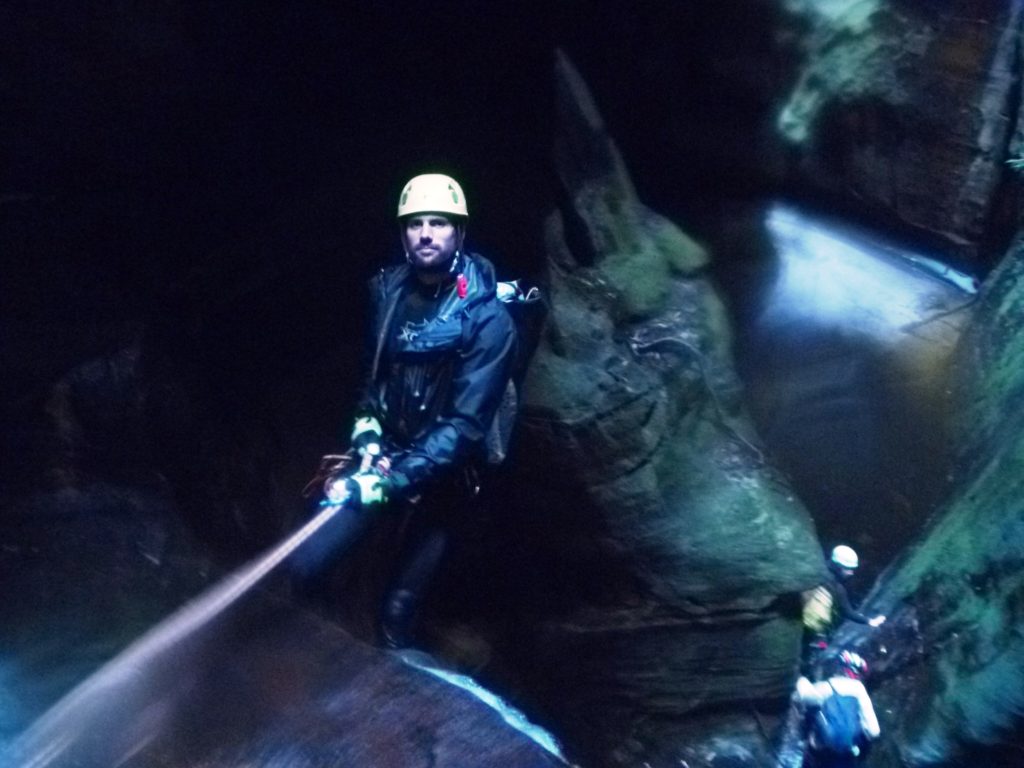 these lap pools are good fun!

We reached the end of the canyon at 11.40 and paused for the obligatory photos back into Galah canyon framed between 2 coachwoods. 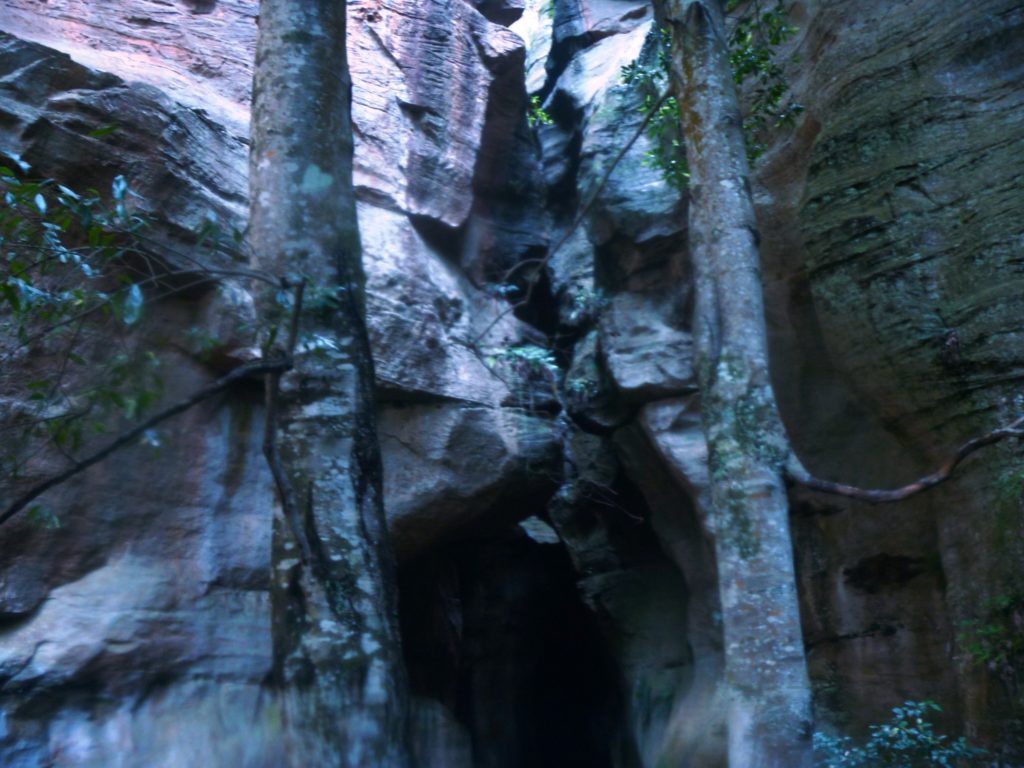 The iconic look back view of the Galah Canyon exit, between the twin coachwood sentinels 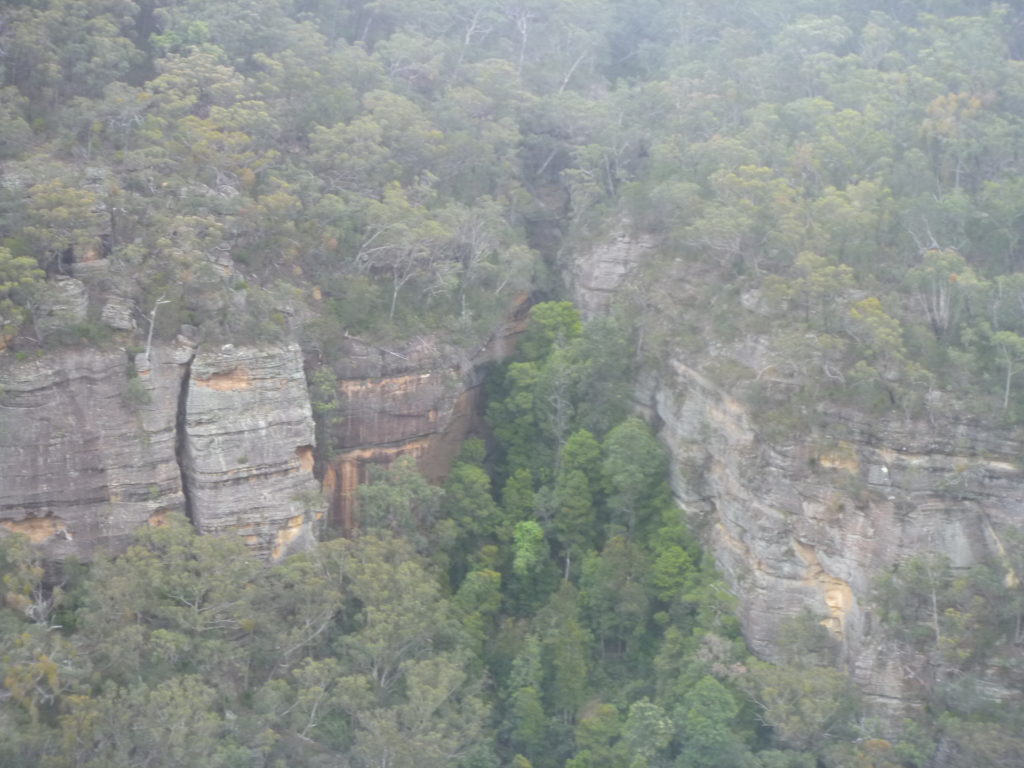 The normal exit route is 200m to the right, but we descended the gully, then moving out right to reach Rocky Creek. After refilling water bottles, we scrambled up the gully 100m upstream of the Galah Canyon finish. At the cliffs, Leo rock started climbing, but the mere mortals convinced Felix that a slab about 100m downstream from the Galah canyon finish was better. Felix climbed and lowered a rope for us, and followed with a similar performance on a further slab. We made a way right, found a narrow cleft about 100m upstream of you know where, and allowed Leo to put down a rope for us. At the top at 14.00 we were rewarded with views up and down Rocky Creek, and Galah canyon far below us, effectively 100m upstream. (This is all a complicated way of saying we zig zagged up to the top in a 200m zag).

We made our way over the top of the ridge, then down the scrubby spur to our first 20m abseil at 15.15 down a waterfall into Contradiction Creek. This was initially done in 2 stages by Pierette and Tony, as they could not see if the rope reached the bottom of the full drop, Felix and Adrian abseiled the full drop, and Leo abseiled and rebelayed to facilitate the pulldown.

We made our way down the creek, and at 16.00 reached the formal start to Contradiction Canyon, when one disappears down a sink hole in the middle of the creek. It was dark, but did not require head torches. A 2nd abseil, that more adventurous souls could perhaps have downclimbed, and wades between narrow canyon walls followed. A 6m abseil down a subterranean waterfall was followed by a dark cavernous section requiring head torches. By 17.00 we left the subterranean world and clamboured down rocks amongst coachwoods to meet a final errant abseil. Fortunately! For Pierette discovered here she had taken off and left her harness behind, so the rest of the party admired the quiet of the canyon while Tony & Pierette retrieved the harness. 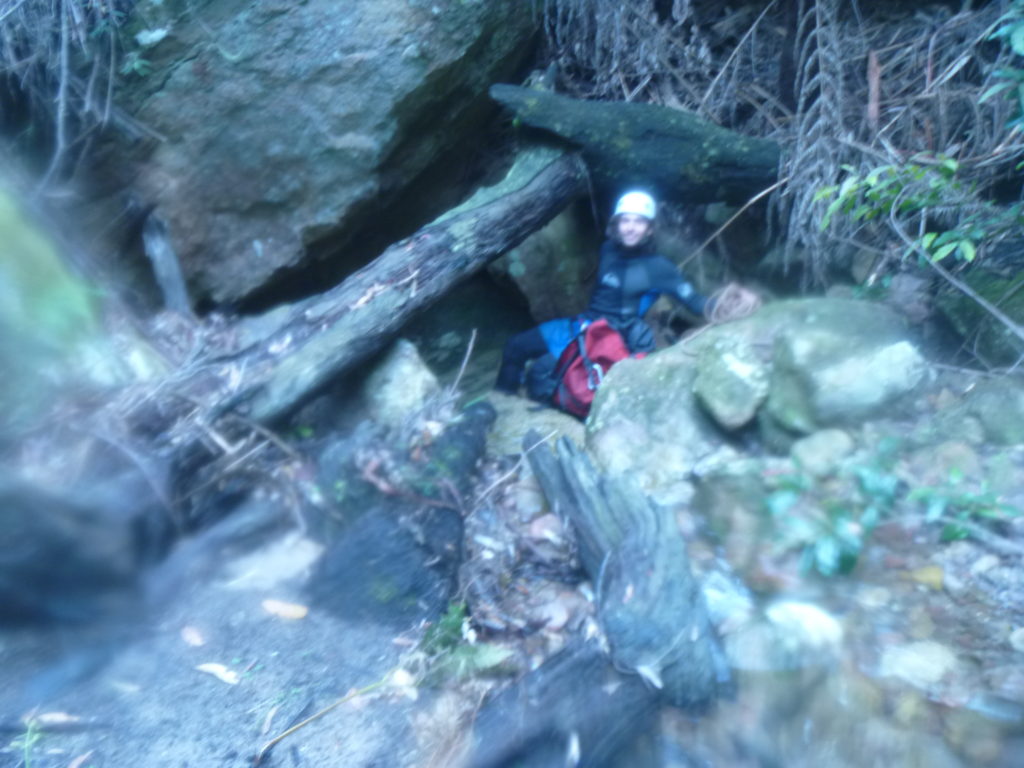 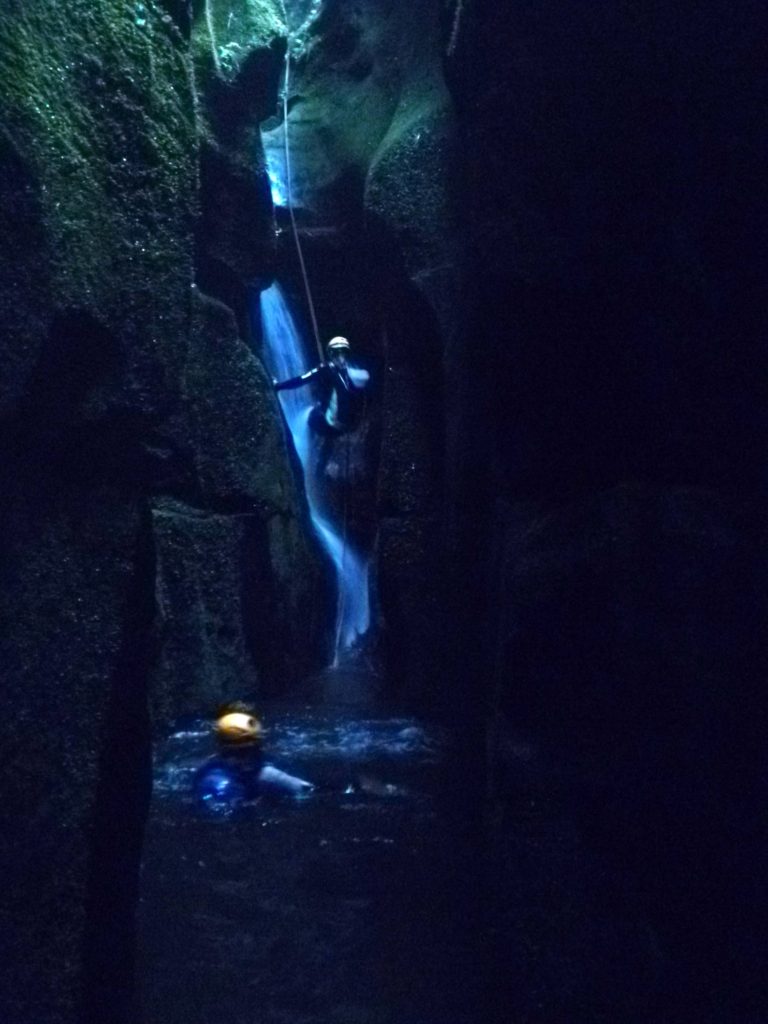 A 6m abseil down a subterranean waterfall 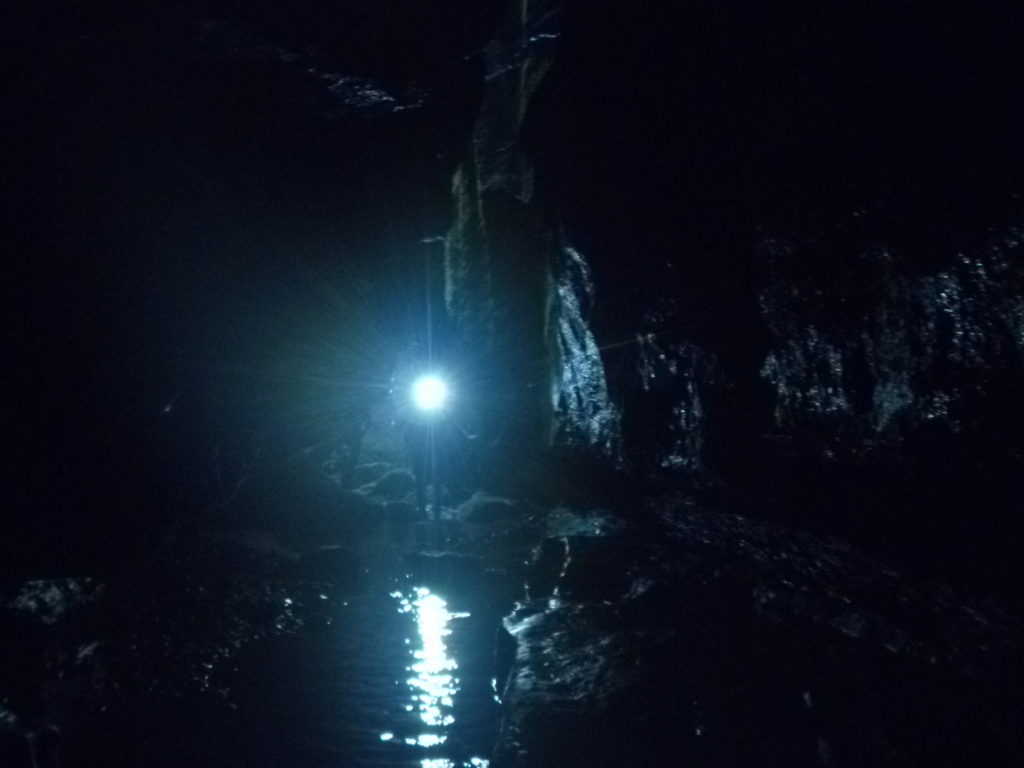 was followed by a dark cavernous section requiring head torches

We reached a jumble of trees in Rocky Creek at 18.00, stripped off wetsuits, washed sand out of shoes, filled waterbottles and made our way directly up the other side. We made some exploratory climbs and backtracks before Felix and Leo were able to make their way up clefts in the cliffline and put down a rope for the mere mortals to climb and for pack hauling. It took us an hour to reach the top at 19.40, and after some quick snacks we looked forward to a clear run west up the ridge. 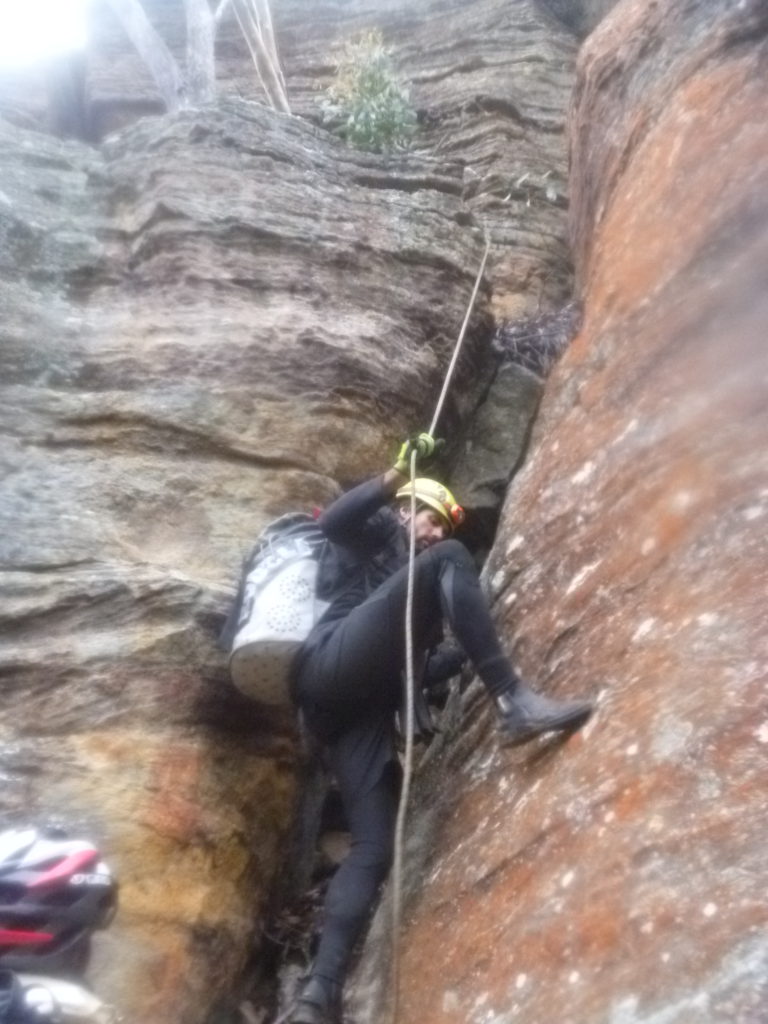 Or so we thought! We hit a 2nd significant cliffline, exactly where the map showed there to be a distinct break in the cliffline. We headed right (north west), but the cliffs showed no signs of giving ground, and in fact swung north – not where we wanted to go. We pressed on, ever hopeful, but at 20.30 reached a significant overhang with walls which invited inspection in torchlight for aboriginal art. In hindsight, the wind weathering was too great to have preserved any art, if there ever had been, and at this point we decide to retrace our steps to where we had first hit the cliff, and to continue south west. In torchlight we stumbled along the base of the cliffs in light rain, there being no difference between where the cliff line was marked on the map and where it was not. We reached the next creek from the west where we hoped there was a break in the cliff line, as shown on the map, but there was not a hint of one.

At 22.30 we reached dry ground, somewhat level, with dry firewood. As it was raining, this must have been protected by an overhang, but it was so high above us to be out of sight. A consensus to stop was soon reached. If there was any hope of an obvious pass up the cliff, we would have continued, but luck had been against us, and tortuous route finding was not a goer in the dark. Adrian entertained with his 3 previous unplanned overnights on extended daytrips – canyoning Danae Brook, skiing off the Grey Mare Range, and hiking at the top of Hannels Spur. 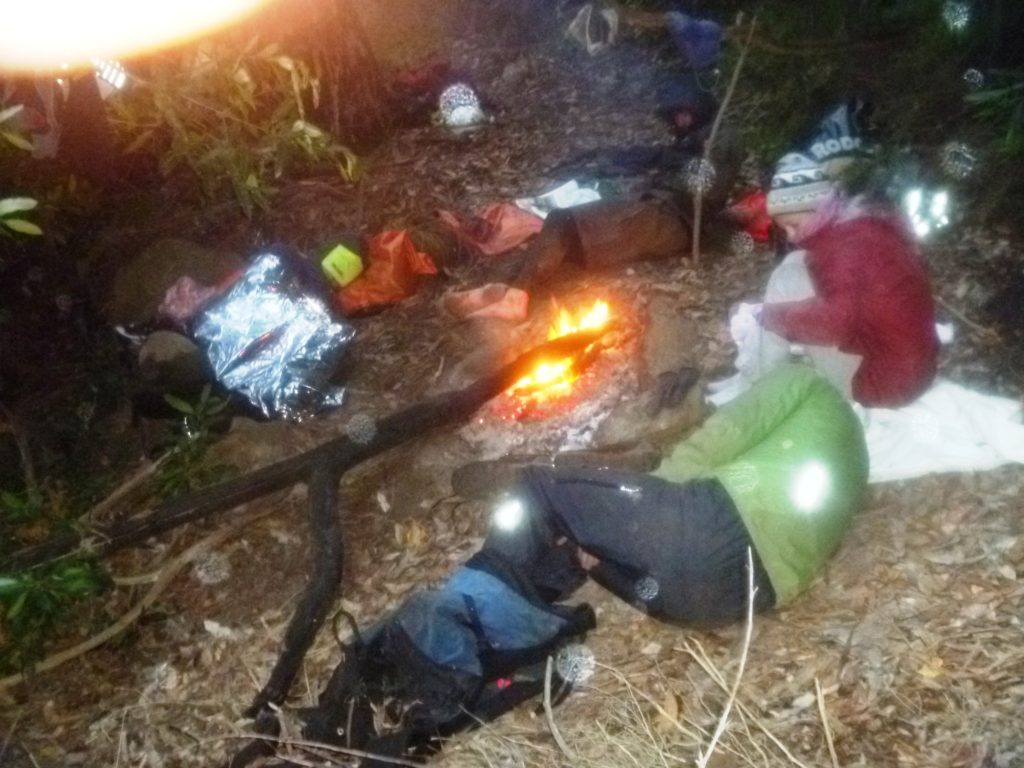 Each settled down to their space in an effort to sleep

We dried our clothes as best we could around the fire, and by midnight each settled down to their space in an effort to sleep, though there proved to be little of that. Felix appeared to sleep the most, and the rest of us periodically stood around the fire to warm cold limbs, or had jockey positions that involved rolling over to baste the other side. Nobody could claim to have stayed evenly warm through the night, and everybody agreed dry socks would be an essential component of emergency gear. At least there were plenty of willing hands to keep the fire stoked through the night.

At 6.45 on Sunday morning we moved off, and shortly later, at the last point before the map showed the cliffline recommencing, we found some slopes that appeared to allow passage. In fact, it was more difficult than appeared from below, for Felix lead a climb that the mere mortals only managed using his jumar on a 2nd rope in addition to his belay. 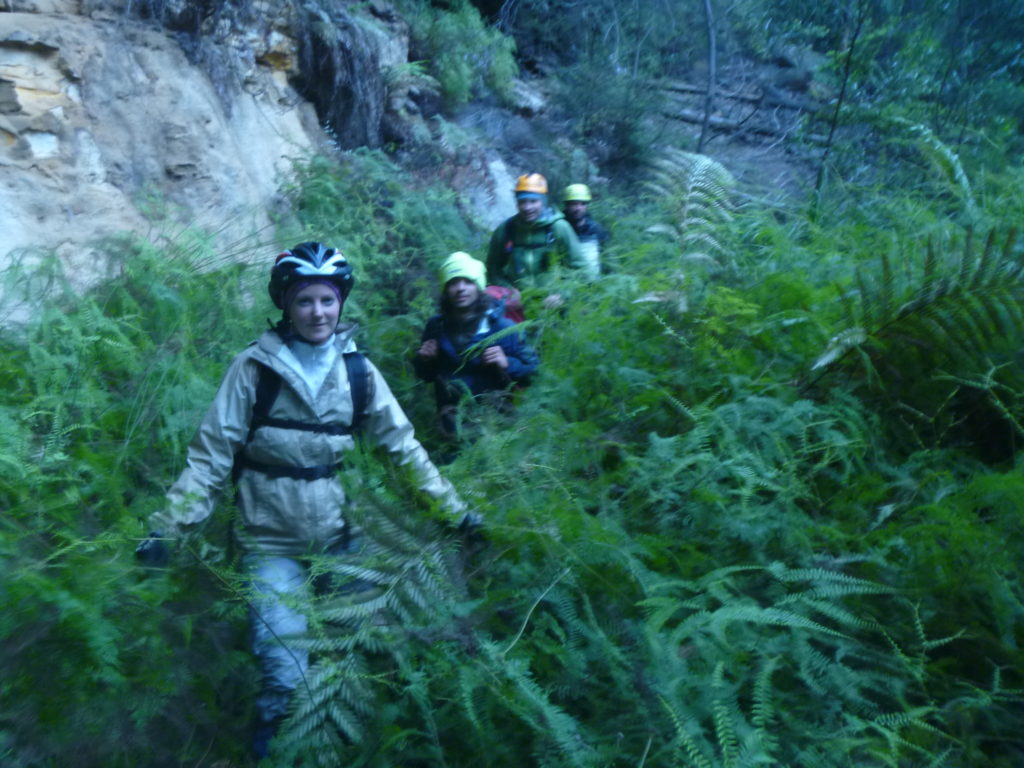 Continuing along the cliffline the next morning ……

We pushed through the scrub, and eventually reached the old trail that would lead to Heart Attack Canyon. We followed it South West, and the spring flowers provided colourful splashes of pink (Boronia), white, yellow, red (Waratahs) and dainty ground cover. We then walked East on a compass bearing across the head waters of Galah Canyon to finally reach our camp at 10.30.

We lit a fire, and the party variously ate dinner, breakfast or lunch, according to desire. We left and headed toward the cars at 12.30pm. Tony and Pierette walked on to their car, while Leo, Felix and Adrian dropped their gear at the Rocky Creek exit track, and headed off to do Breakfast Creek canyon. We reached Rocky Creek by 15.40, and the exit climb by 17.00, collected our packs and arrived back at the cars by 18.15. 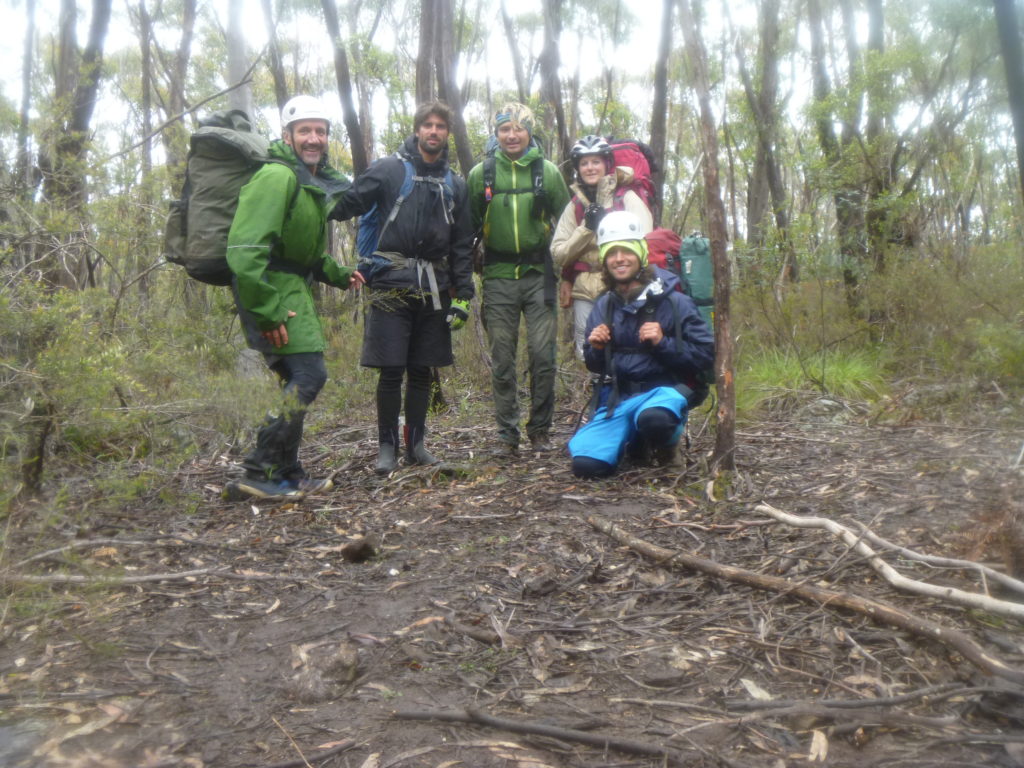 In hindsight, Galah and Contradiction Canyons in a day is achievable if one heads up Rocky Creek to the known Galah Canyon exit. We had chanced a route out due west from Contradiction, based on a break in the 2nd cliffline on the map. That there was no such break (the map is wrong!) proved fatal for our ambition of returning to camp that night. The experience heightens the feeling of success when one does stretch oneself and succeeds on other trips, which is more often than not. This “not” experience proves that one does survive and learn. While we were lucky to find such a dry flat area with a plentiful supply of firewood, we could also congratulate ourselves that we recognized and took advantage of it. Press On Regardless! 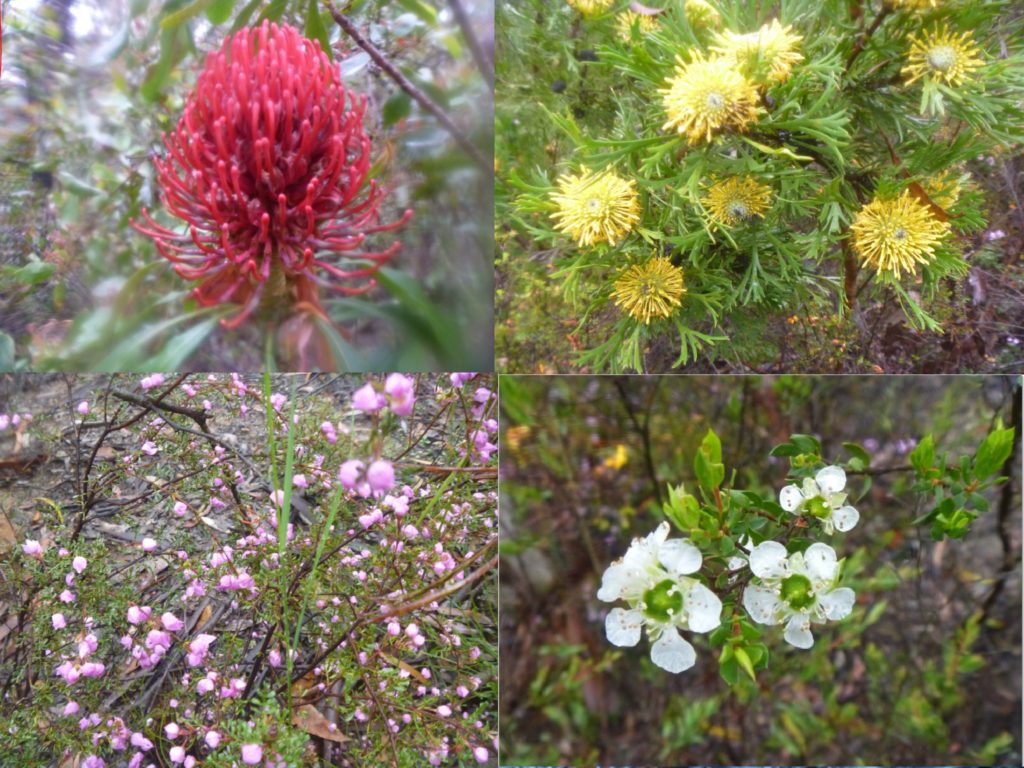 ……. but remember to smell the flowers!