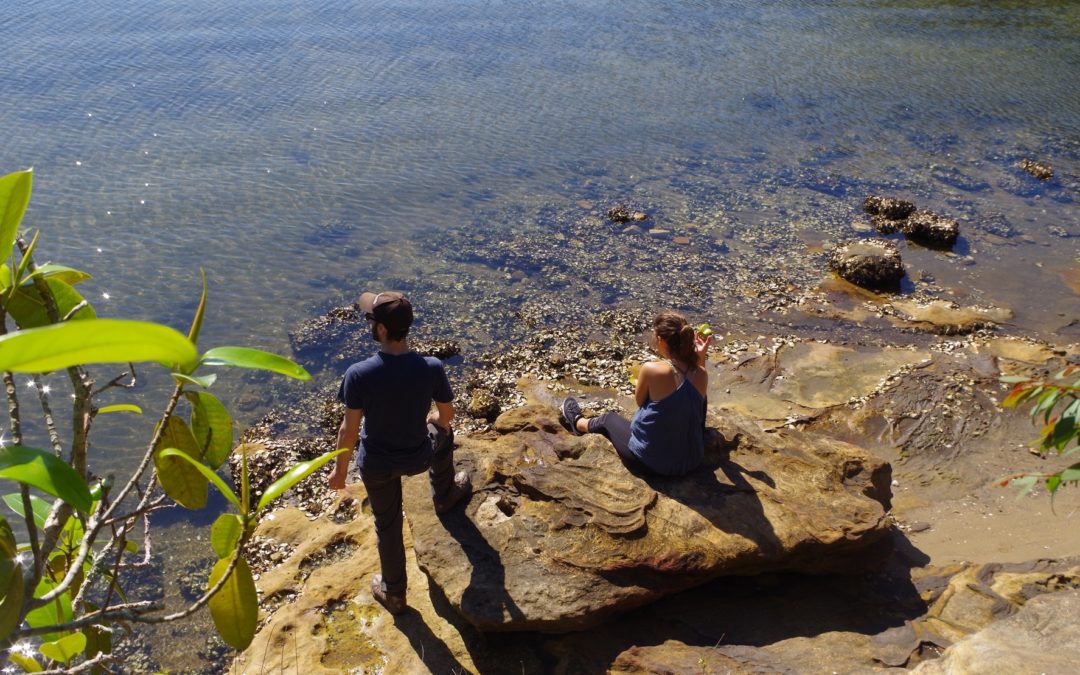 With 2 prospective walkers having missed the rain at Central – due to bus delays in the city – 5 of us assembled at Cowan Station for the walk along a section of the Great North Walk (GNW) to Brooklyn.

To her dismay, Emily realised when she was on the train that her water bottle was still back in her car, so that required a trip up to the only shop in Cowan to get bottled water. Meanwhile it was fortunate for Tony that the water bubbler on Cowan Station was working, as he had come with empty containers to fill up.

I had decided to start the walk earlier than usual as there was a forecast of thunderstorms later in the afternoon. As it turned out, the day was mostly sunny and very warm.

We set off down the track to Jerusalem Bay, spotting a Skink along the way (lizards were the only reptiles we saw). Much of this section is in a cool wooded valley. On reaching the Bay, we had a 20 minute break while Tony went in for a swim – he had even brought a snorkel along! It probably wasn’t the ideal time for a swim as high tide wasn’t for another 2 hours, but it meant that the water was shallow enough to see schools of fish passing by (see photo).

After the Jerusalem bay break, we set off up the rather steep climb up tp Govett’s Ridge. Then it was down again to cross Campbell’s Creek before another more gradual climb over a track a bit rough in places to the top of the long ridge overlooking Long Island. At this point the track joins a good wide trail which doubles as a railway access road. This trail continued for about 2.5 km and I was glad for the early start as the vegetation offered some shade, which is absent if the track is walked an hour later. At one point we took a short side track to look at the views towards the sea, and Lion Island can be seen poking its head above nearer ridges.

At the point where the track starts to drop down to the Dam, we went to a little rock shelf which had some shade as well as good views over the Hawkesbury River and Lion Island.

After lunch we continued on down the track to eventually reach the Brooklyn Dam campsite (which is not signposted by the way – you need to know where the sidetrack to it is). Then we crossed the “spillway”- such as it is – of Brooklyn Dam, an d found a group of Scouts having a rest there. The dam wall has also had work done on it to improve the top of the wall (see photo). The dam itself was originally a water supply for steam locomotives at Brooklyn. I would be cautious about swimming there and certainly don’t recommend it as drinking water! Then it was off an another climb again, with Andrew puzzled why I was not following the GNW sign (which is for the track encircling the Dam). The track up the hill is the GNW but not signposted.

This track (actually a service trail) undulates for about 2 km until reaching a sign which says “Brooklyn” änd “Cowan”. At this point I departed from the GNW track to take up the older track which is no less steep, is shorter by 1.5km, but a bit rougher as it is lo longer looked after by NPWS. At one point someone (probably scouts) had left a cairn in the middle of the rack and there was a small cave just to the right (which could be a useful rain shelter). Then the track leaves this “road”to wind down to come out at Brooklyn just north of the road bridge over the railway. While on this track we saw the 1.37pm train just leaving the station. It didn’t matter that there was 1 hour to the next train, as a refreshment stop at Brooklyn was planned anyway.

A check of the rain radar showed storms forming over the Blue Mountains, and a few rain areas on the North shore, so the choice of an earlier start to the walk was wise.

We went to the Anglers’ Rest Inn where we had cider, iced water, and despite already having had lunch, Tony decided to to it up with a Fish and Chips meal. Tony planned to get the 3.37pm train after looking round Brooklyn. I told him that it probably wasn’t a good idea to swim at Brooklyn, as then he might become a fish’s dinner (sharks)!

then Emily, Yang, Andrew and I made our way to Hawkesbury River Station for the next train, although I caught a separate train north.

It turned out that the storms did not reach Brooklyn to just after 4pm, so we were fortunate with the weather. It was very warm though, being almost at the limit where if it was any hotter it would be too much for this walk which is exposed in a lot of places.