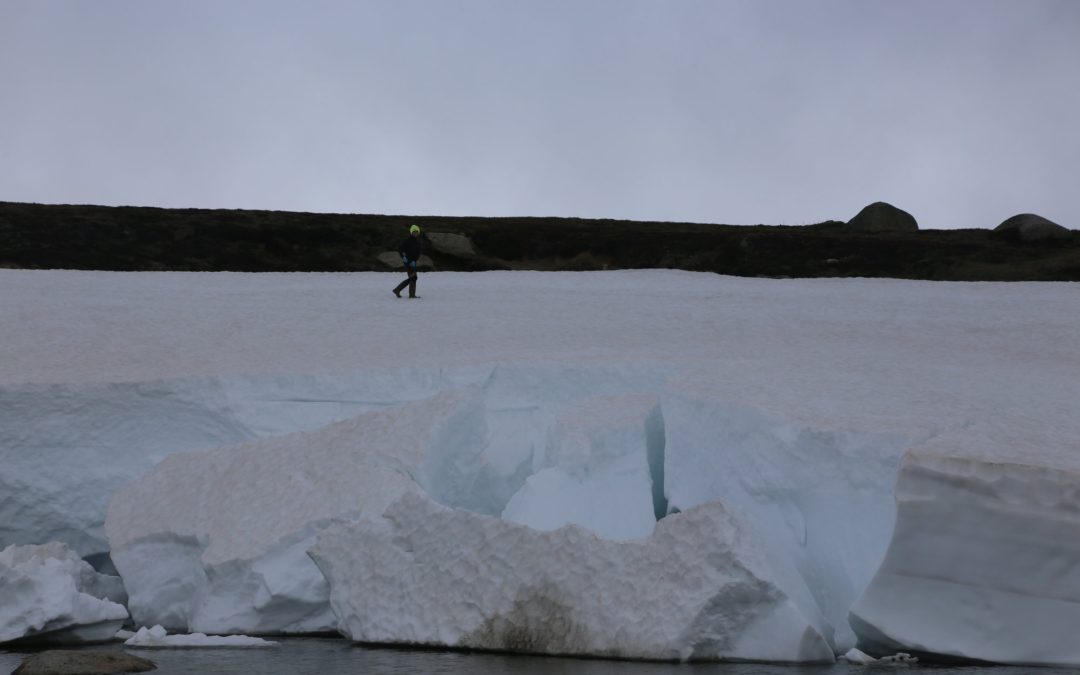 October in the  Snowy Mountains has daytime temperatures that can still be cool and mild, the blowflies have yet to make an appearance, and the snow still lies in big drifts, giving the area a distinctively alpine feel. Mt Townsend, Australia’s second highest peak, (2209m) has been on my list of unclimbed peaks for a long time. Perhaps because it lies at the western end of the Main Range, and requires quite a long approach, it has always managed to get missed on my many trips to the Snowys.

After a pleasant car camp outside of Cooma Friday night, Felix, Owen and myself set off for Charlotte Pass to begin the walk to Townsend. We were on the trail by 10am. The clouds at the Pass were low and scudding across the cold moorlands. It was  cold enough to warrant wearing beanies and gloves. The wintery conditions, so close to summer,  highlighted how extreme this alpine region can be at any time of year, and how important it is to be adequately prepared for all sorts of weather conditions.

Despite having all the right gear with him, Felix decided this trip would be best walked in gumboots! And even with the daytime temperature not exceeding 12 C for the entire trip, Owen felt comfortable in his t –shirt & shorts for the entire weekend (leading to me nicknaming him the “Iceman”). Well…I guess, each to their own!

We made the the 6km trek via the Summit Road out to Seamans Hut, then continued part of the way past that, where we left the track to take a shortcut to Muellers Pass,  saving about 3km extra walking. This meant dropping into a steep valley, crossing a river, then  climbing steep snow drifts on the other side. Everyone was enjoying this extra challenge, and once on Muellers Pass we then headed toward Townsend. We stashed our big packs and swapped to small day packs, as we planned to return the same way later. Felix kept his big pack on though, as he has plans to climb Denali (6194m) next year, and so used this trip as a trainer. He may have to ditch the gumboots for that climb though…

The variable terrain of the Snowys means it is easy to under estimate travel times, with conditions ranging from boggy ground, springy tussocks, rocks overgrown with sharp scrubby vegetation, hidden creeks and impassable clifflines, all adding extra time to what can look like an easy walk. It is wise to factor extra time for this if you are going trackless here.  About 90 mins after leaving the pack stash, the final approach to Townsend was gained. Fantastic rock stacks adorned the craggy summit. We had much fun scrambling around the jumbled erratic boulders before making the summit, amid fast moving clouds.

Townsend should really be Australia’s highest peak.  It was originally thought to be so, until Kosciuszko was found to be slightly higher. But Townsend (2209m)  has that “high mountain peak” feel, which everyone in our little group enjoyed. Perched high above the western valleys and snow crested peaks, we felt on top of the world!

The clouds soon began to lift, revealing a stunning view in all directions. After a few selfies and taking in the vast panorama, we found a sheltered spot below the summit for lunch. I noted quite a few Alpine Funnel Web Spider burrows, and even found a frozen spider outside one the burrows (see my photos) . So…watch where you sit when in the Australian Alps!

As we glissaded (bum-sliding  on snow) sections of the mountain going back down, we then decided to have a go at Kosciuszko. By now the sky had cleared a lot and it was turning into a lovely sunny afternoon. We collected our big packs and headed up the ridge to get on top of Australia’s highest mountain (2228m)  by 5pm.

The summit was a little anticlimactic, being more of a big hill compared to the craggy delights of Townsend, but the sweeping views still rewarded us. After more glissading and a few more kms of walking,  we returned to Seamans Hut, where we made camp nearby.  By now we had covered well over 17kms , much of it off track, so our legs were starting to get  a bit tired. The hut was a nice place to have dinner, relaxing out of the chilly westerly winds.

Next day, the sky was clear but the cold wind still made things brisk. We decided to return to Charlotte Pass by traversing the Stilwell Ridge, summiting Mt Stillwell then dropping down to Charlotte Pass. The rocky pinnacles and bluffs, interspersed with snow drifts and alpine meadows made for spectacular walking. The views to the Main Range were great too. Owen and Felix kept the vibe alive with much singing on both days of this trip, with songs ranging from “Sound of Music” selections  to many ‘back catalogue’ favourites, and even some tunes from the TV show “Flight of the Conchords”.  This was a very musical trip!

Mt Stillwell, at 2054m elevation, gave us our 3rd 2000m plus peak for the weekend, and signalled the end of a very enjoyable, challenging and spectacular hike through some of Australia’s finest alpine country.

Thanks to Owen and Felix for their cheerful, ever enthusiastic and song filled company . On reflection, it was quite an epic trip given the mixed off track terrain, with full packs much of the time, but when the mountains are this good, who wants to stop exploring? Even in gumboots!