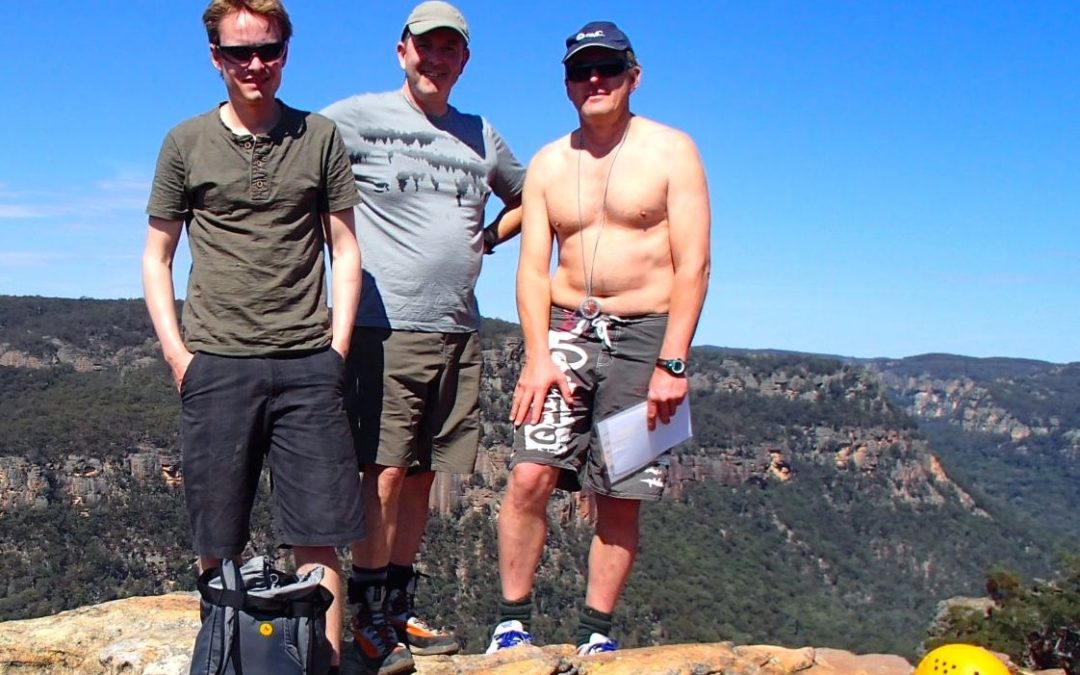 The Wolgan Valley runs north east from the Dividing Range into the heart of the Wollemi wilderness. Numerous creeks rise on the Newnes Plateau east of Lithgow and run into the Wolgan River. A steep pass uses a series of switchbacks to bring the road from Lithgow down into the valley. It’s in good condition because the Emirates One and Only Resort clients do not want to damage the undersides of their BMWs on the way to a weekend of pampering. Beyond the resort the road change to dirt and eventually runs out at Newnes, once a small town serving the oil shale mine and refinery that worked here until the 1940s, but now reduced to some industrial ruins and the Old Newnes Hotel, which operates as a campsite and bush cabin business.

Nature has reclaimed the valley, which is both beautiful and full of wildlife.  Eastern Greys predominate in the first, farmed part of the valley, but around Newnes there are large numbers of Red-necked Wallabies, as well as Wallaroos and a few Swamp Wallabies. Marty reported innumerable roos on the road when driving in at dusk. I arrived much later, having been working in Melbourne that day, so my problem was wombats. One wombat just stood in the road and stared at me. The situation was too complicated for him to figure out, so eventually I drove slowly around him. 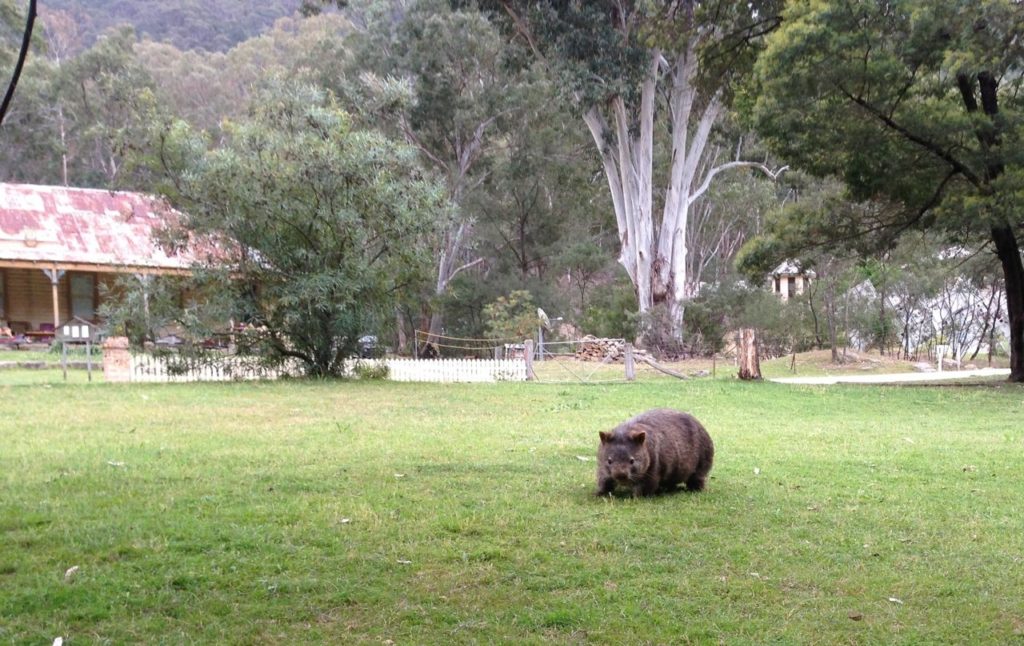 The next morning we were off about 08.00, along the river and up the Pipeline track which once connected Newnes to another oil shale plant in the Capertee valley. I’d had a cold all week and was very short of breath. It was also very hot  – the day reached 30C – so we were all feeling the heat. It was a full two hours before we were 300m above the river at the lookout. 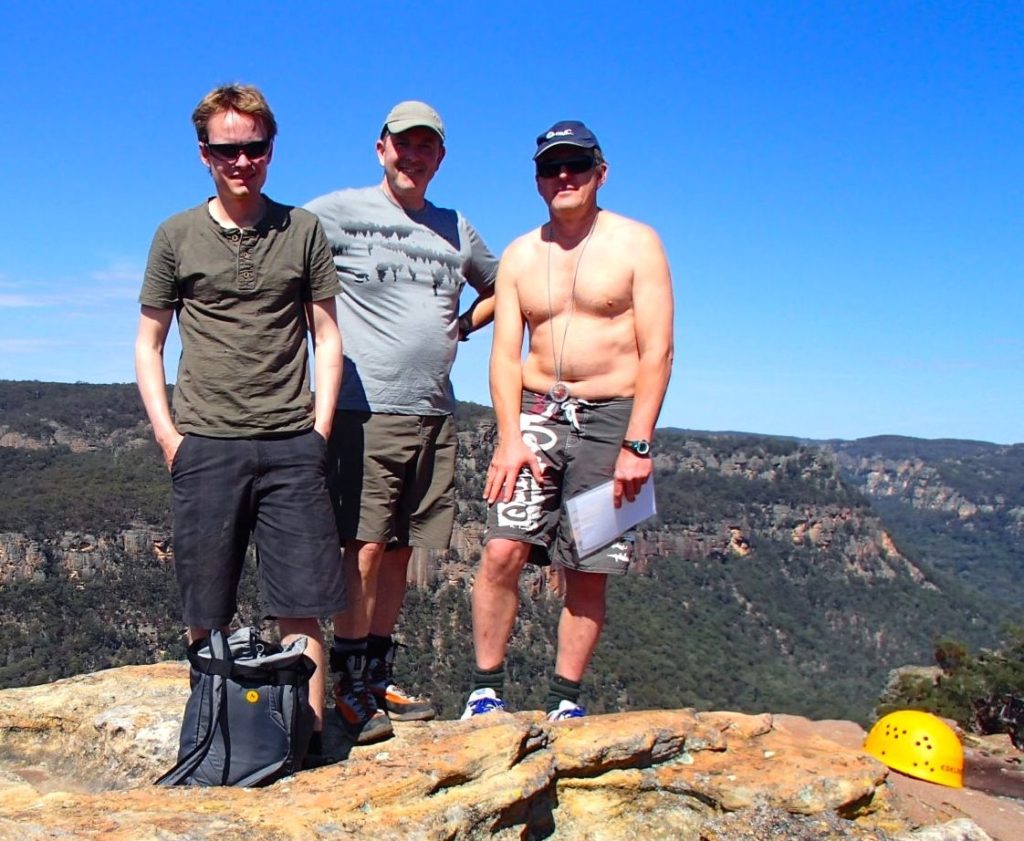 After a break we walked on to the watershed between the Wolgan and Capertee valleys, where NPWS has placed a sign explaining the bats of Starlight Canyon. 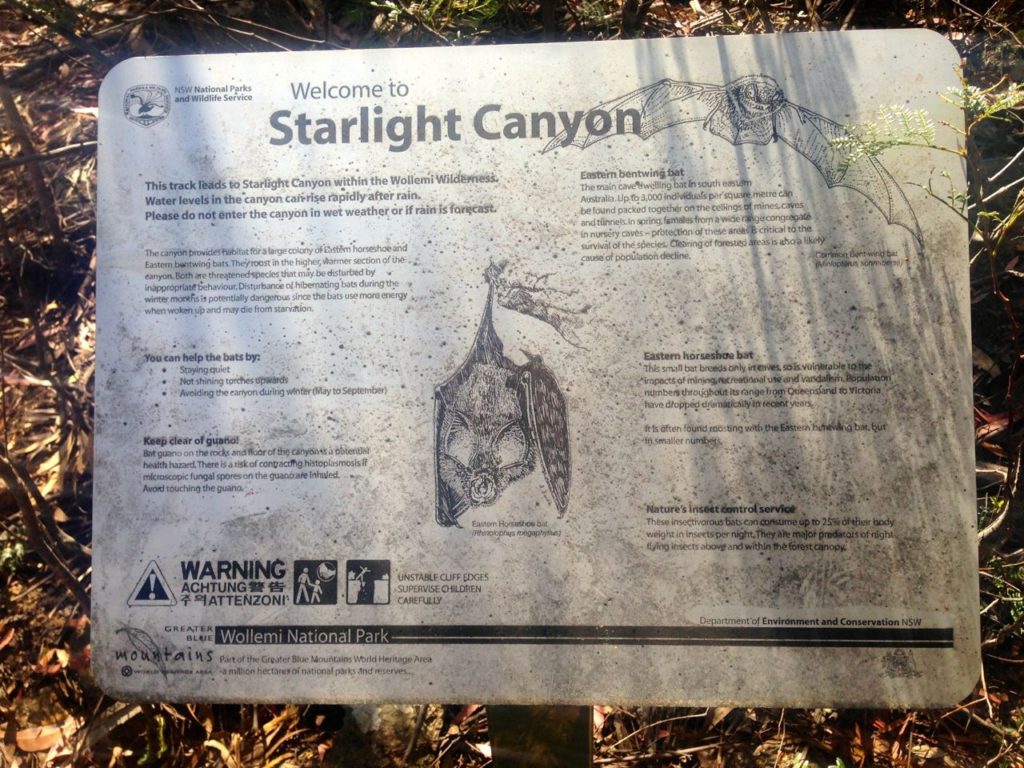 A clear track runs along the ridge for a couple of kilometres until you are above the creek of Starlight to the North and East. Last time we were here we followed the track to the end and found a series of abseil anchors that took us too far down Starlight, beyond the tunnel. We still could not find a clear track leading to the correct abseil, but located it from a GPS reference. Perhaps everyone now enters the creek higher up without abseiling? The creek below looked cool and inviting, and it was now very hot indeed. We had all drunk far more water than usual, but were nevertheless starting to feel a bit dehydrated. 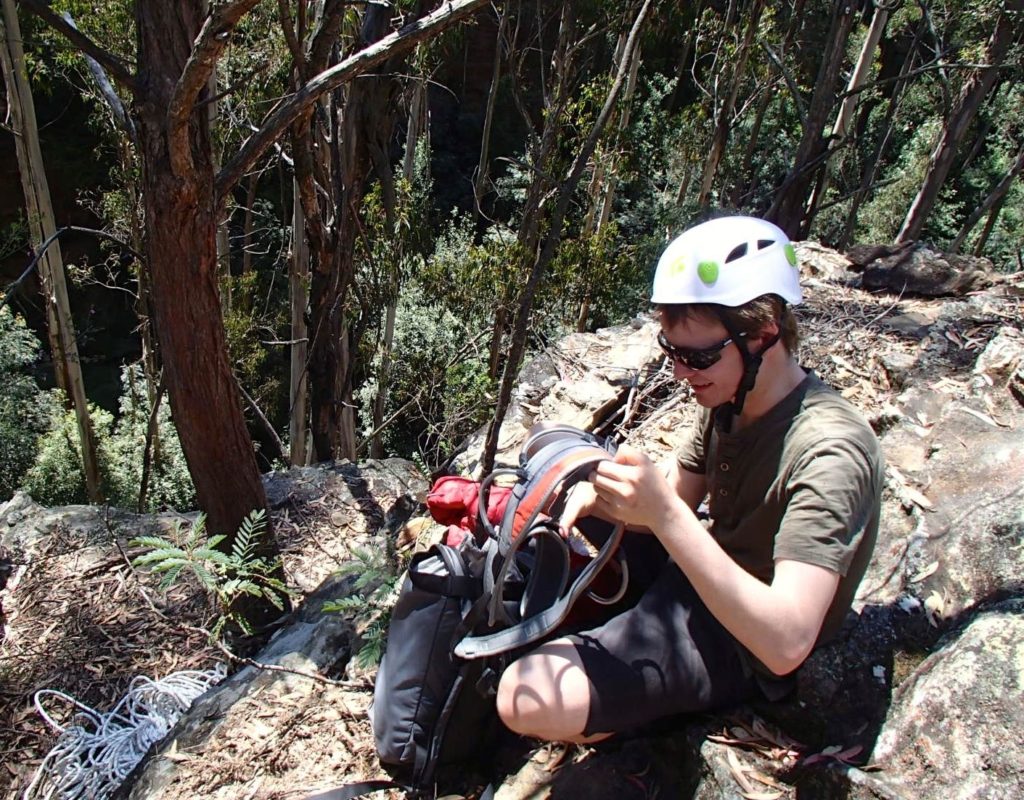 The creekbed was much cooler, but completely dry. We found water at each of the waterfalls, but at the bottom it always disappeared into dry sand. We soon arrived at the entrance to the tunnel section, where the creek disappears underground. 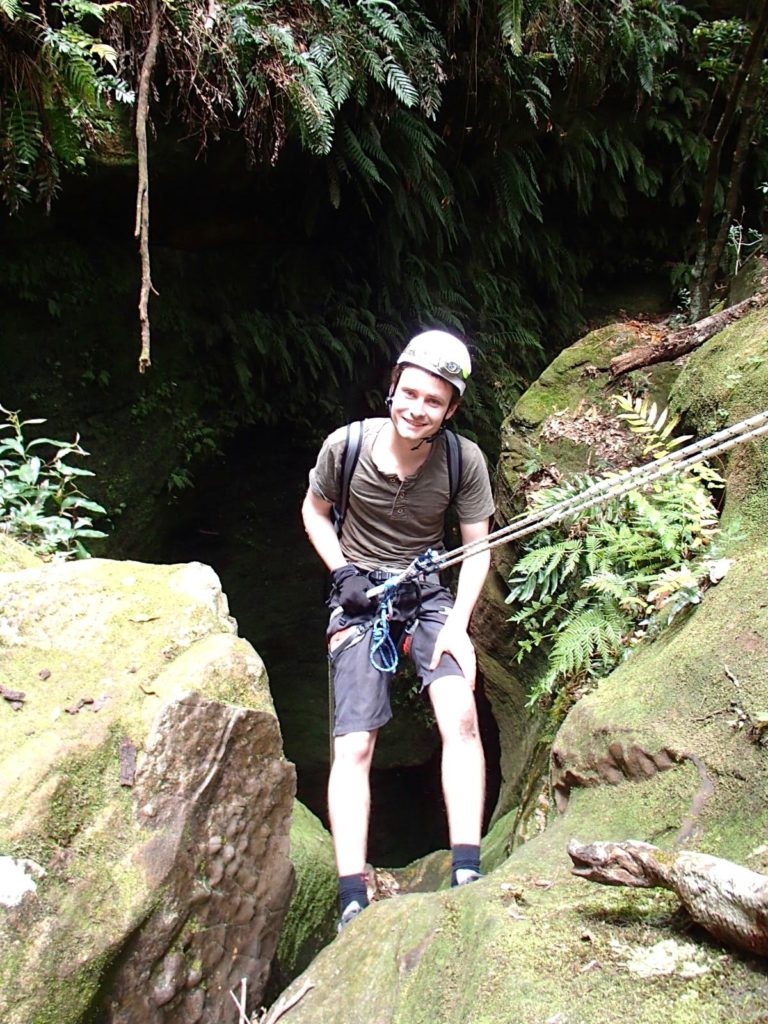 Tim heading down the hole. 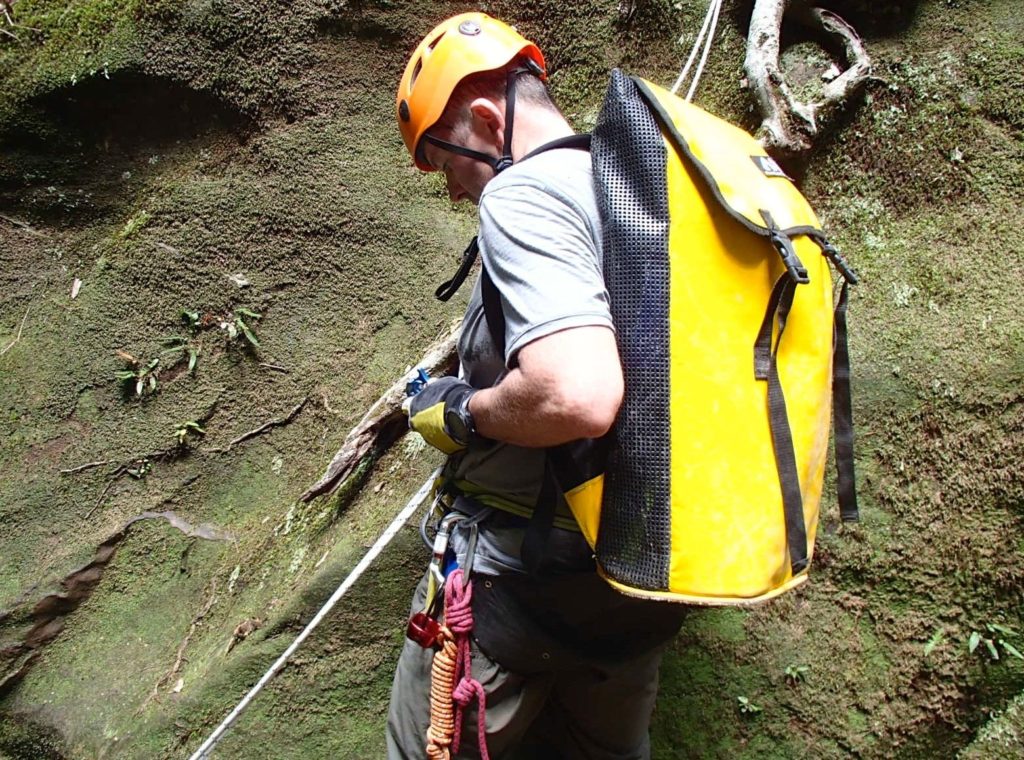 Me getting on the rope… and off down the hole: 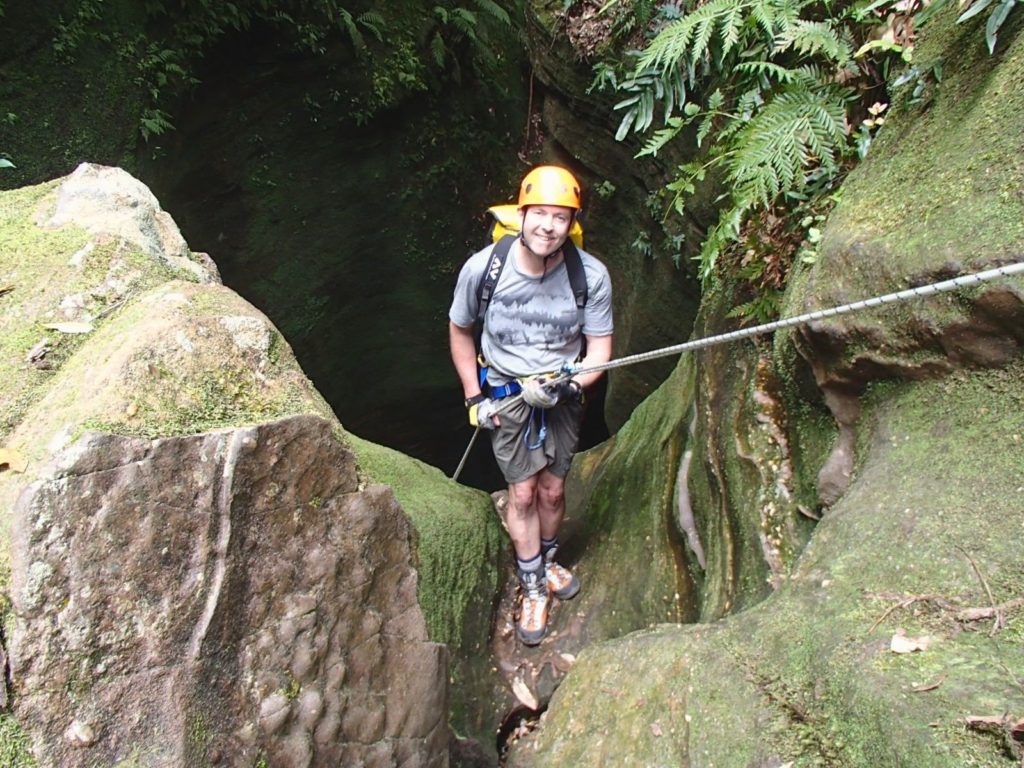 …and half way down the hole: 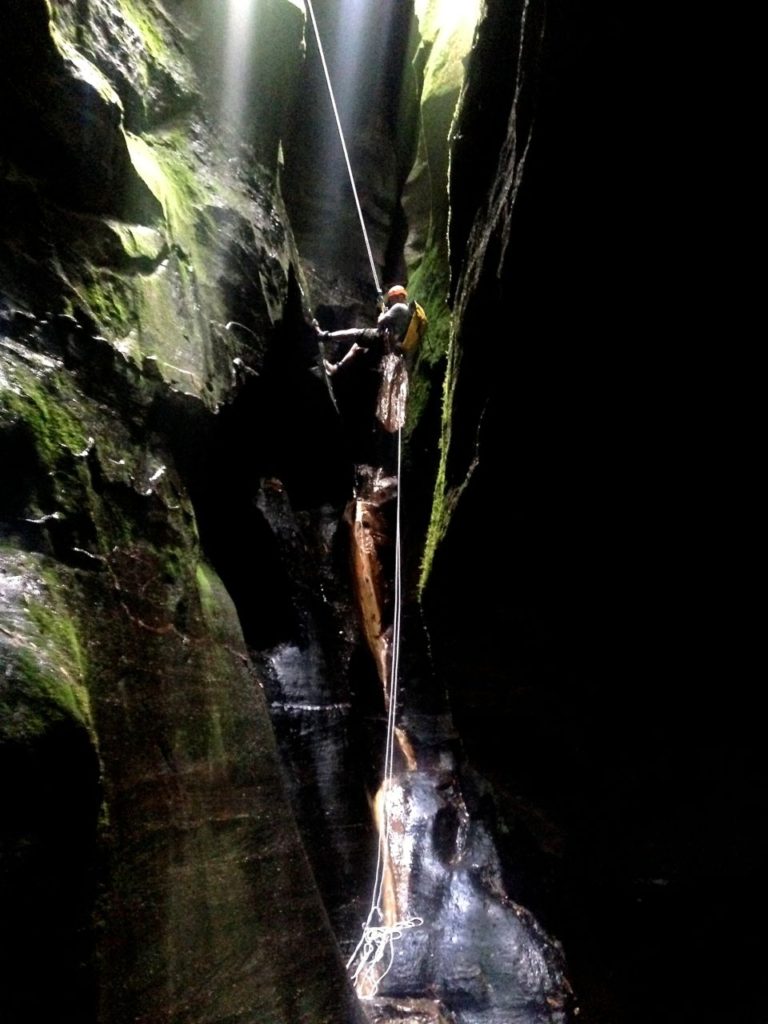 Marty at the entrance to the tunnel section: 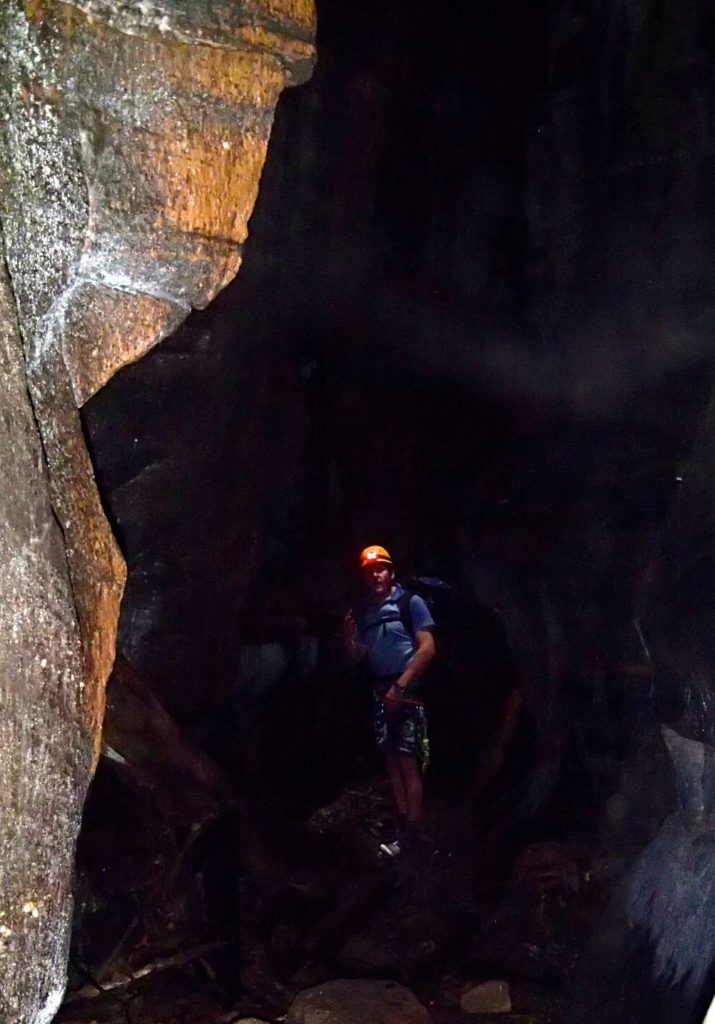 This is a typical bit of the tunnel section with flash: 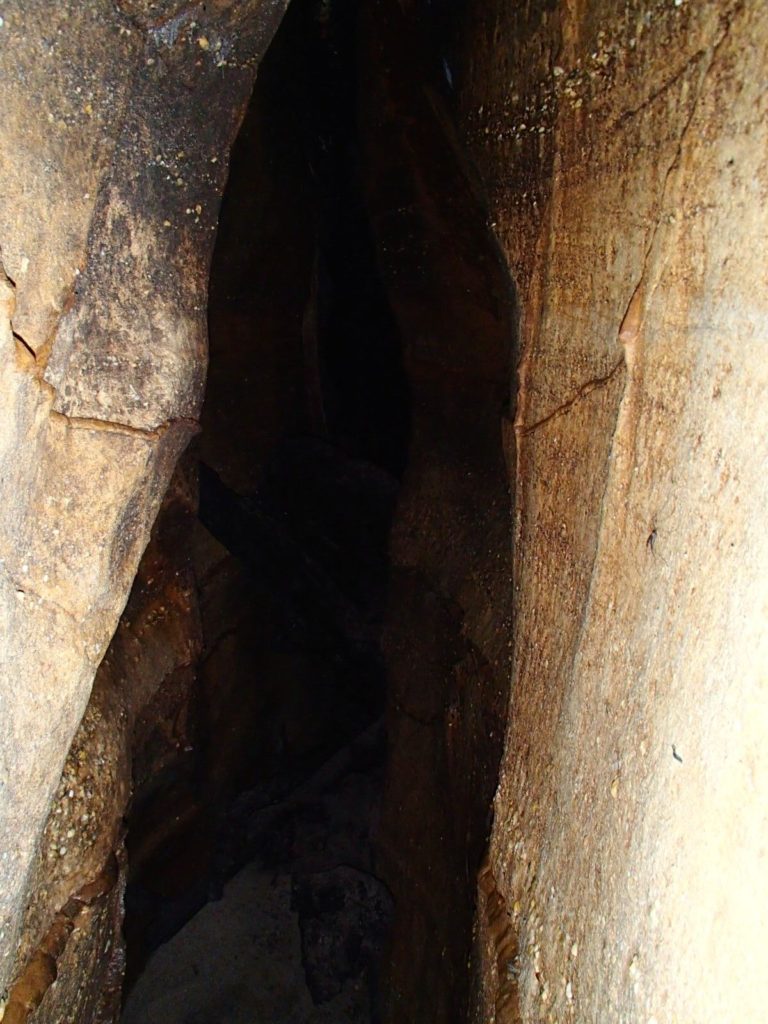 and here the same with redlight, which we were using to let us see the glowworms. The shining patches on the wall are some organism which lives on bat guano! 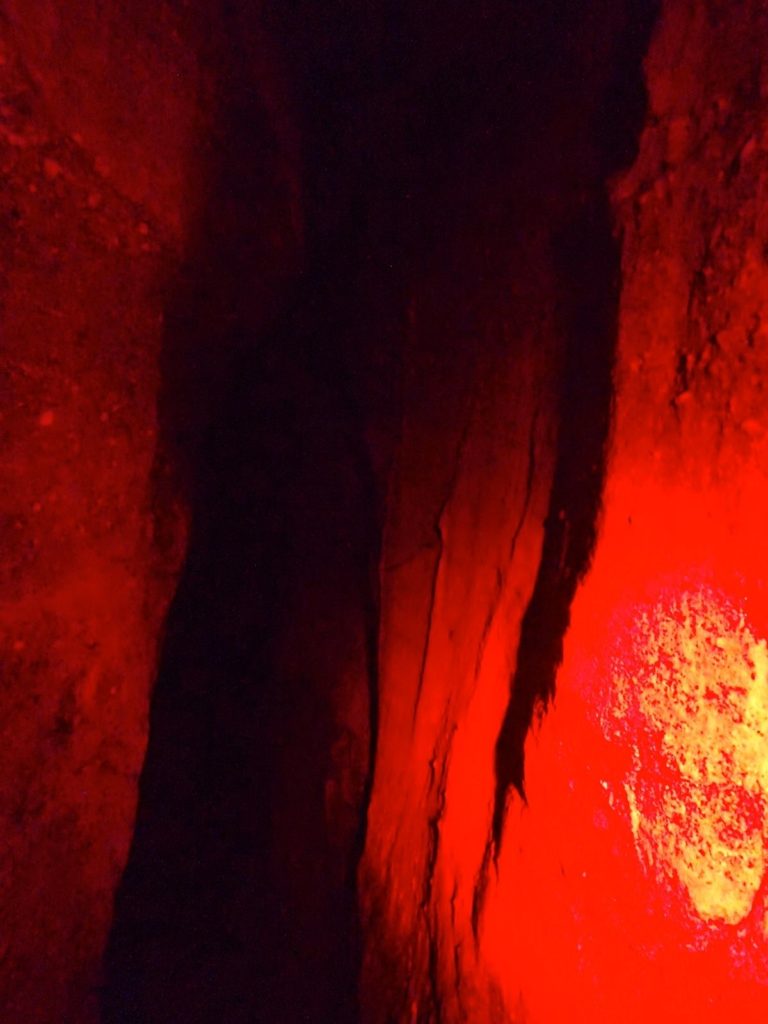 The sloping walls of the tunnel  are covered in glowworms and their irregular patterns resemble the stars in the night sky. It’s impossible to do justice to it, but this is what happens when you put a camera on the ground, pointing up. A few ‘stars’ are visible on the right. 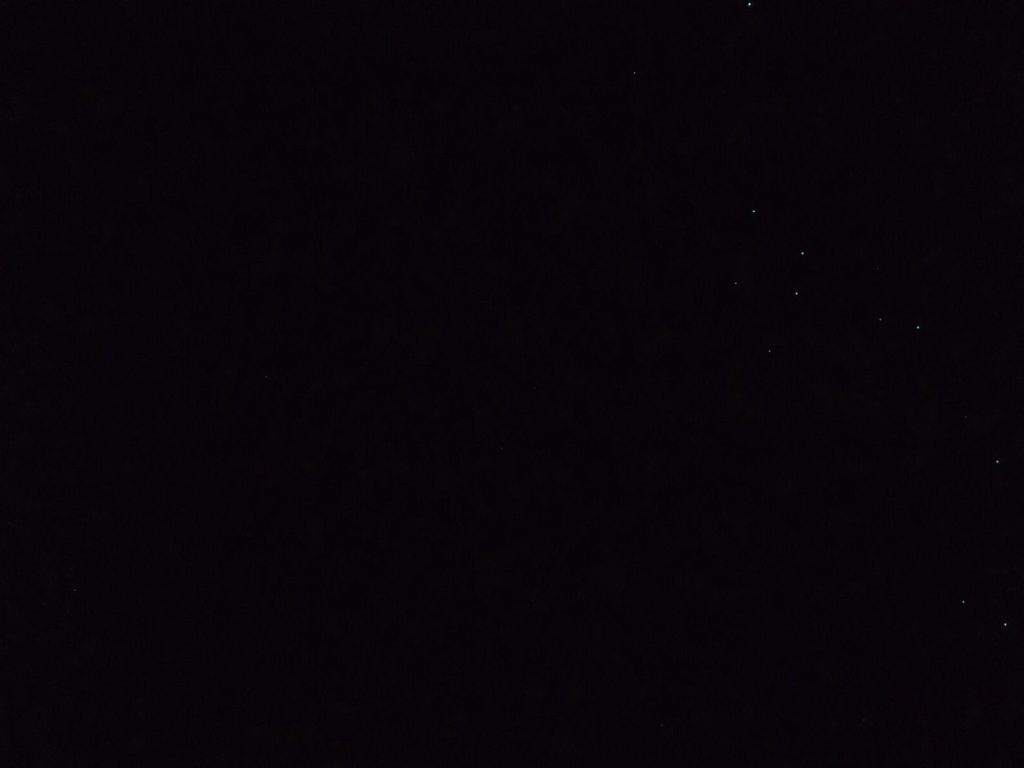 Looking up with flash – the crack goes up perhaps 20m in places. 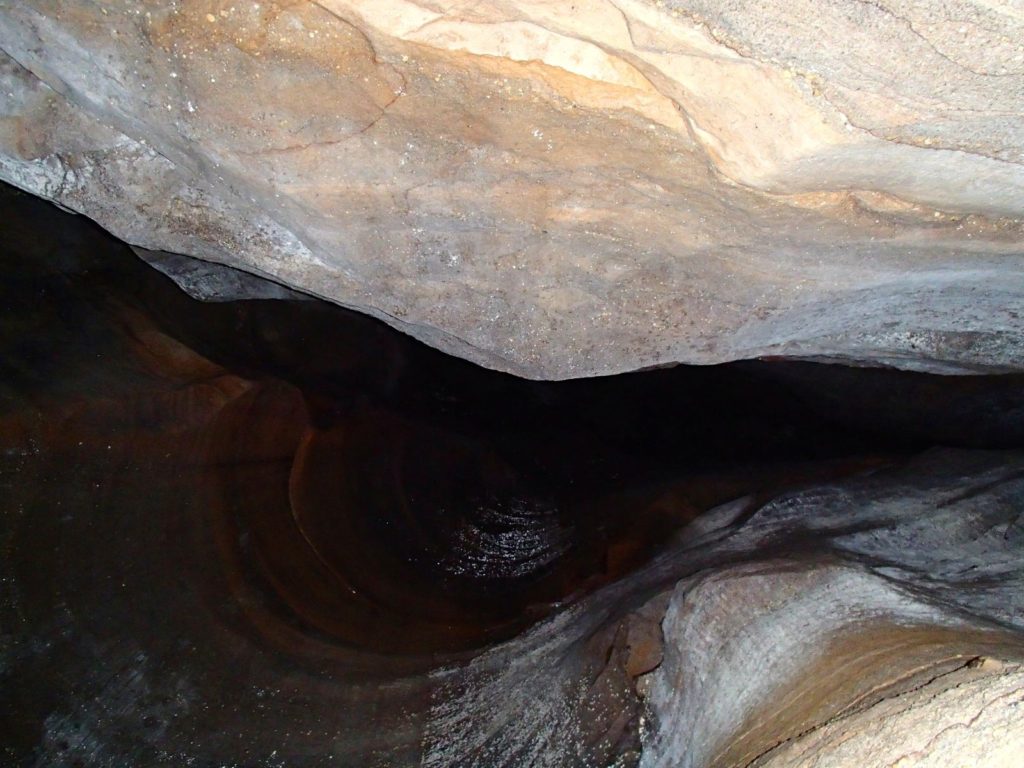 After 300m the canyon emerges into a normal constriction. 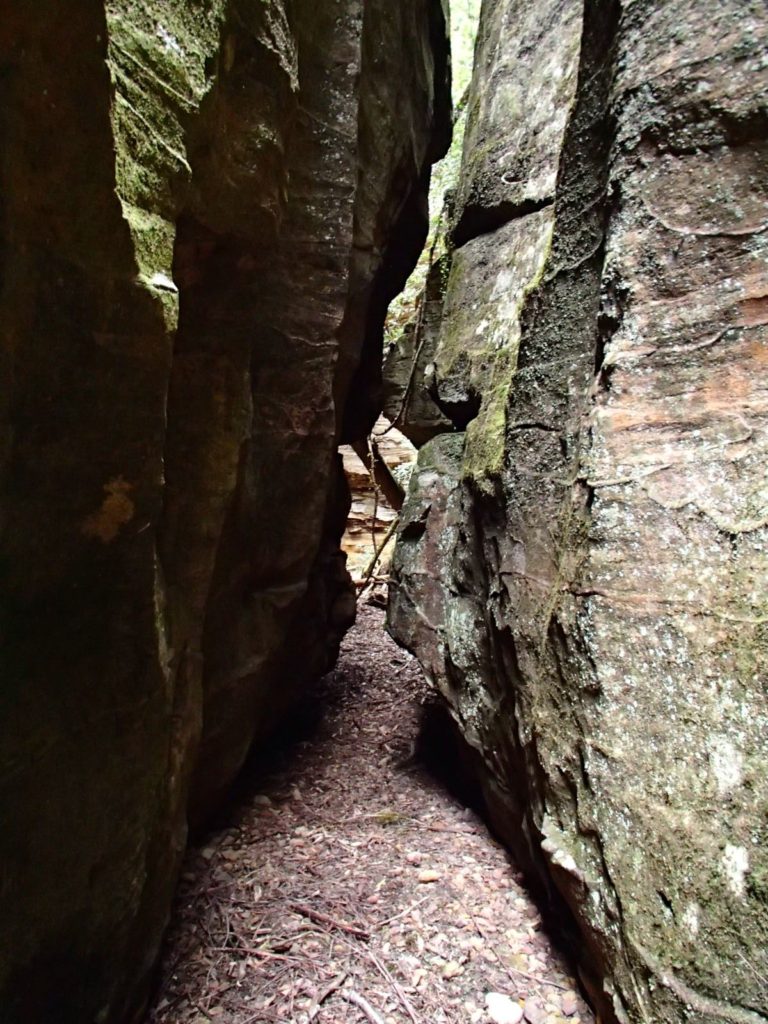 Shortly afterward you emerge into a particularly pretty open canyon, with good coachwoods, ferns and cliff-faces. 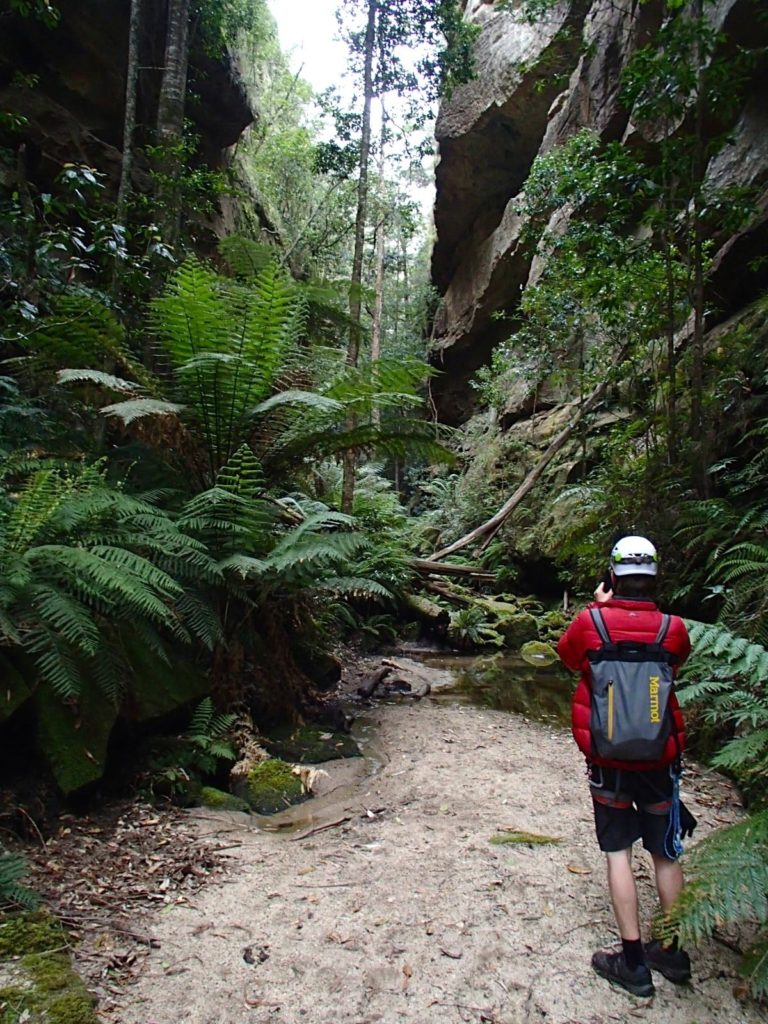 We walked through the open canyon for perhaps 500m, admiring the scenery. 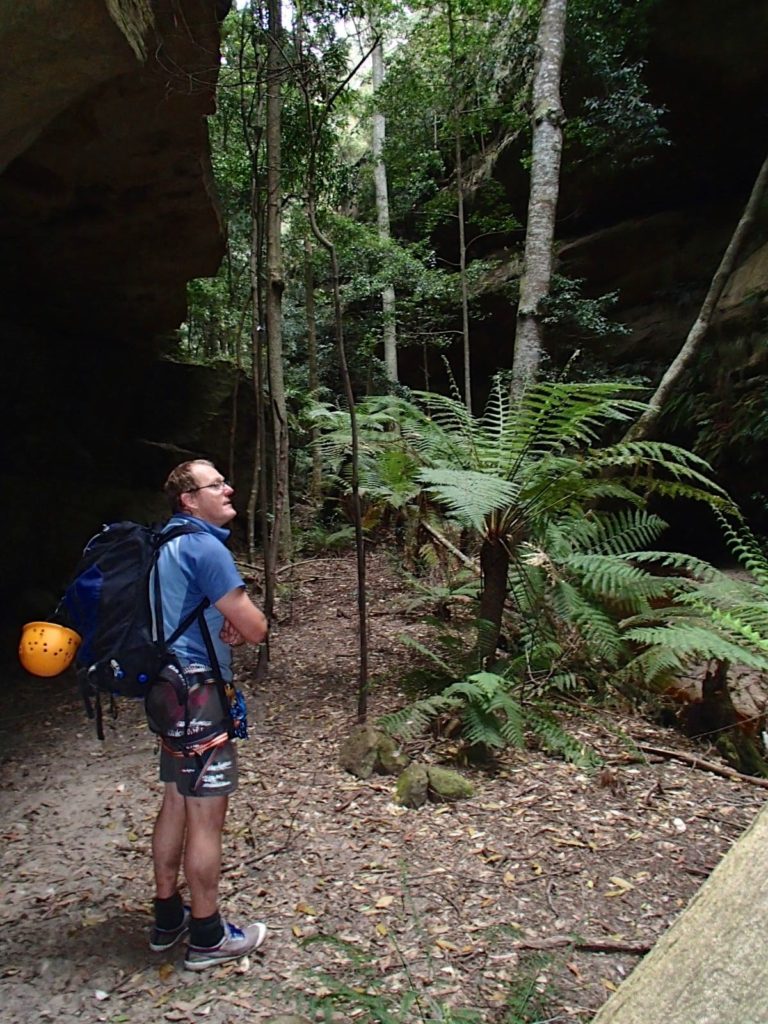 This brought us to the final abseil, where the canyon emerges through the cliffline around 100m above the level of the river. Something weird happened with the panorama setting on my camera, but I think it gives quite a nice impression of the place, and Marty on the final abseil:

From here it is important to avoid the creekbed, which is choked with huge boulders. Staying up on the left bank we were at the river in less than half an hour, splashed across and began the 6km slog back to the campsite. We were back around 18.00, so the whole trip took 9.5hrs, largely due to my lungs being full of the residue of my cold, making me short of breath every time we hit an incline.

There is no cellphone reception at Newnes, but Tim  contacted some friends who have a shack in the hills using VHF radio, and they very hospitably invited us up for a beer around the fire and a hot shower. It’s an amazing spot for a weekender!

Just after we went to bed Elizabeth arrived, having had to work Saturday, and we all settled down to rest before another day in the hills.

A southerly change came through overnight, but it was still quite warm over breakfast and the flies were dreadful as we walked up the Pipeline track again. I was feeling much better – mountain air and the spiritual refreshment of the bush. On Monday I was shocked how bad the air smelled as I crossed King St, Newtown on the way to work  – simply poisonous. Just as we reached the lookout the temperature dropped again and a stiff wind came through. We enjoyed brushing the flies off each other’s backs and watching them blow off helplessly into the void! 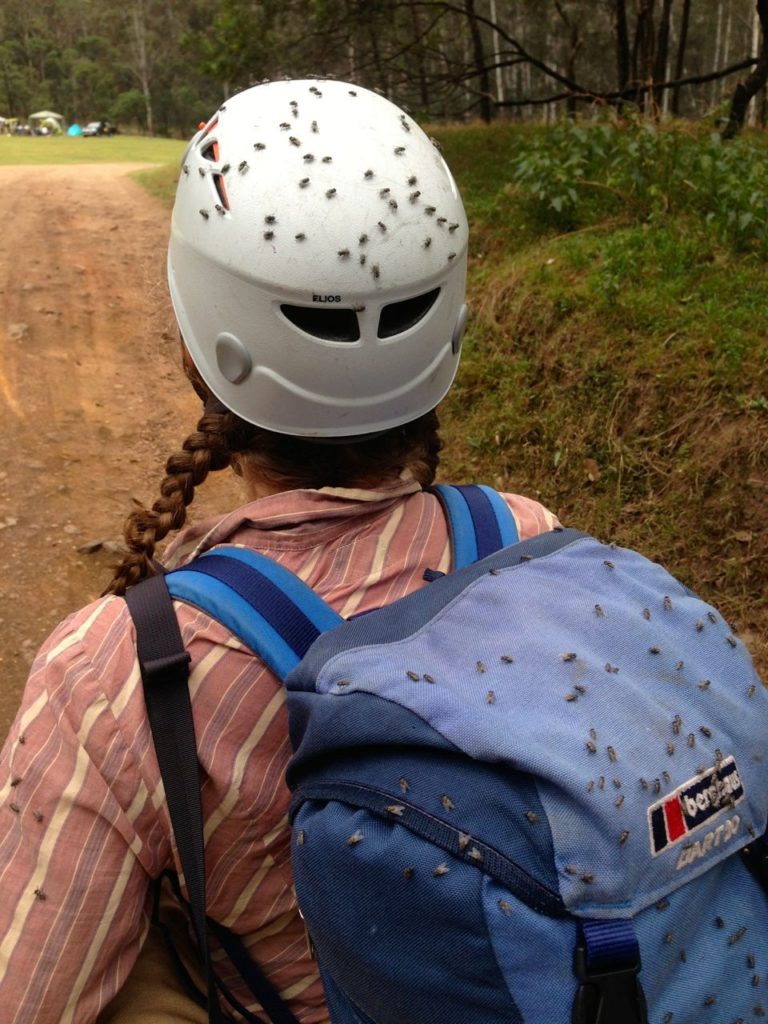 The lookout was a very different place at 16C instead of 30C the day before. The good side of the colder weather was that it was the last we saw of bush flies that day! 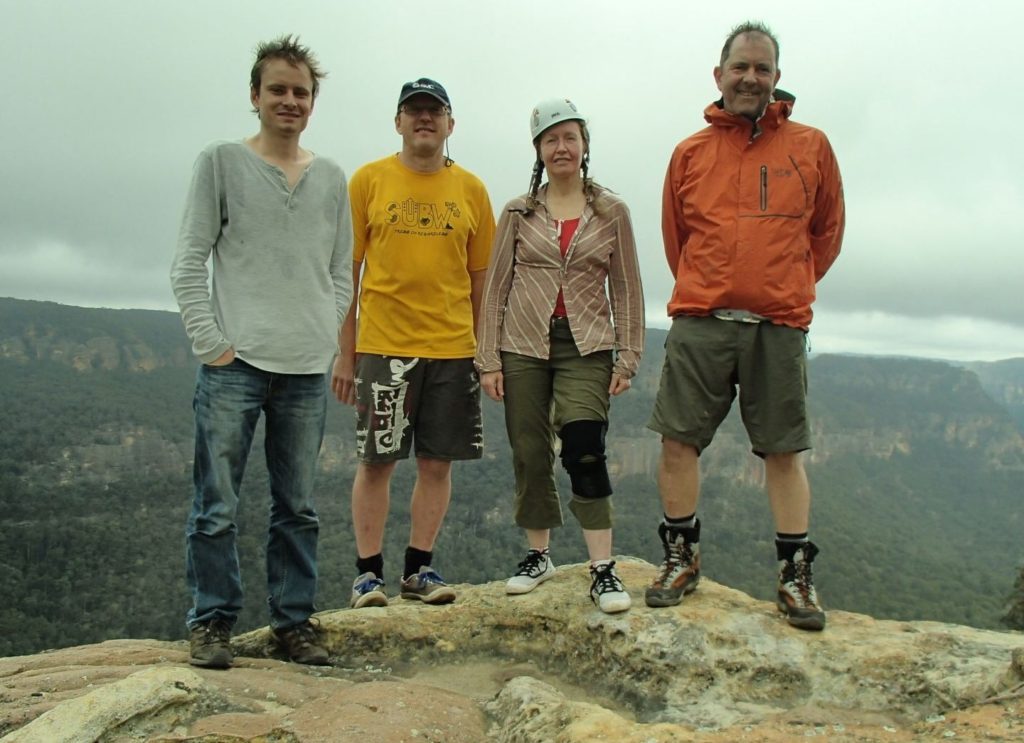 Continuing towards the watershed we easily found the turn off to Pipeline canyon and a few minutes later we were at the first abseil in the tributary creek. This is Elizabeth belaying Marty on the second abseil.

The third abseil follows immediately, with a slightly dodgy anchor off a tree root. There is another anchor high on the right. Clearly people combine these
two drops by scrambling along the ledges on the left to reach this
anchor.

The higher anchor would also avoid having wet tree roosts between your legs all the way to the ground! 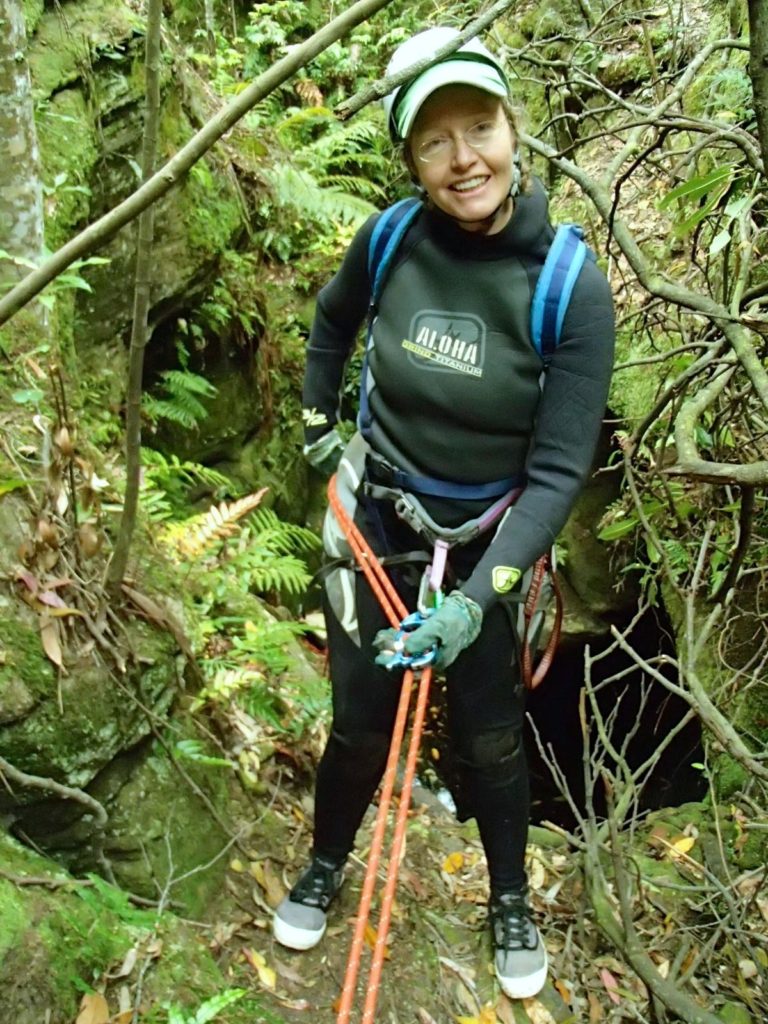 It’s a green and mossy canyon, with wading much of the way. 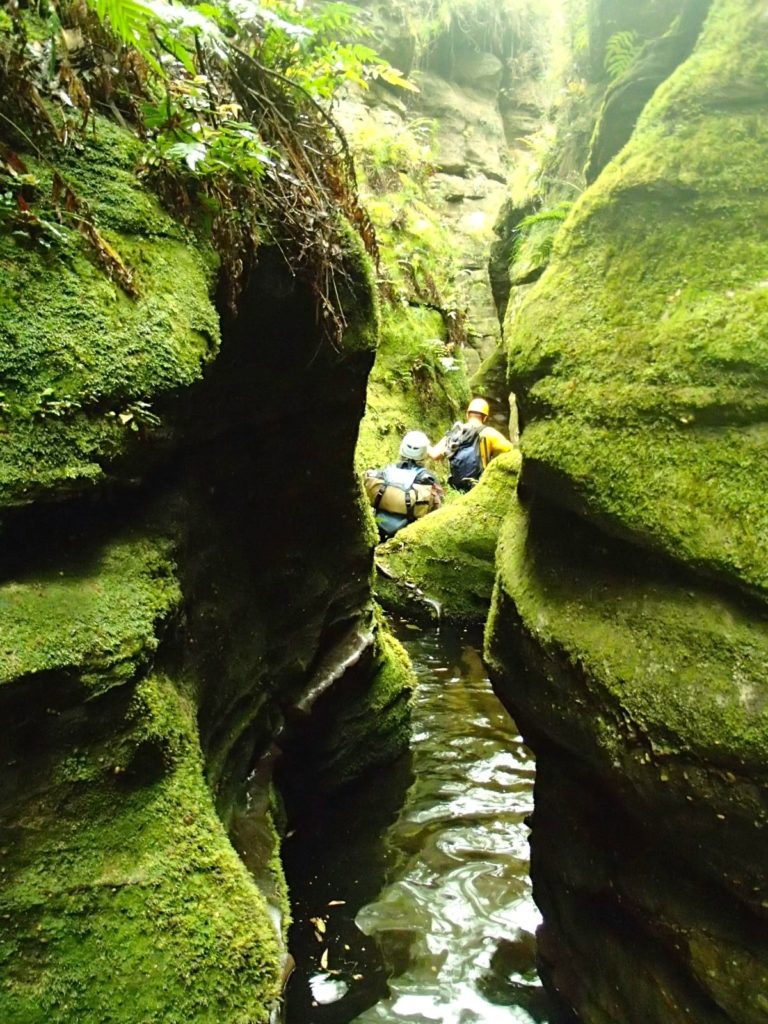 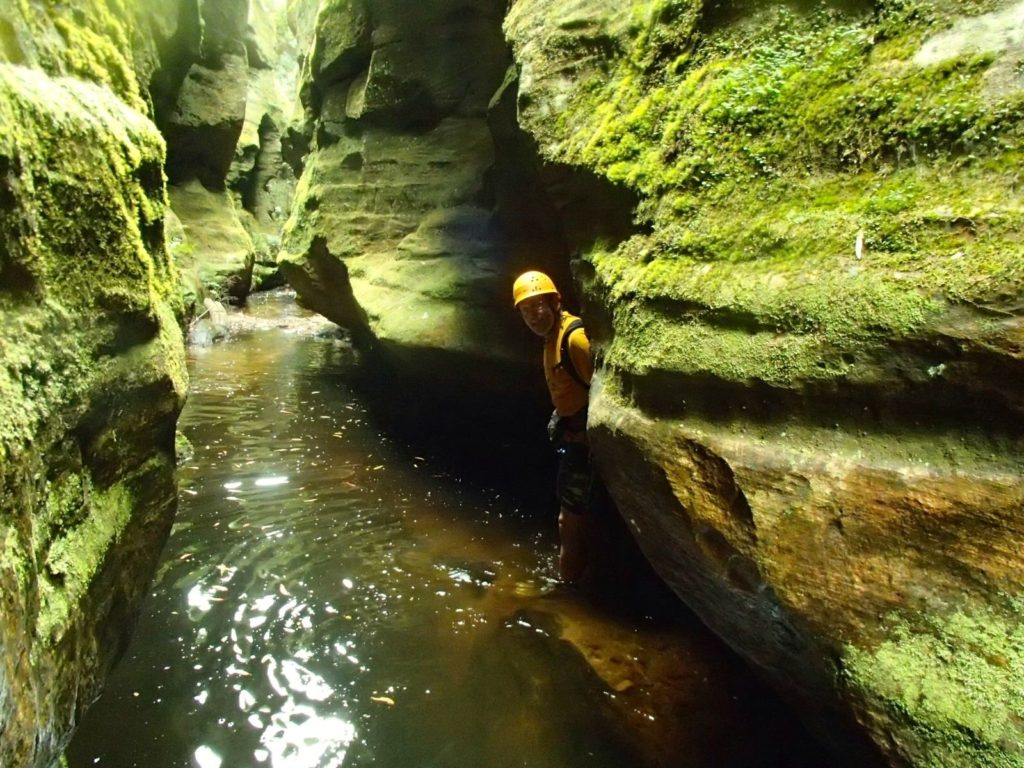 The canyon slot gets deeper as it approaches the main abseil, which has a slightly dodgy anchor on a faggot of logs buried in the sand behind a boulder. There is no obvious alternative: 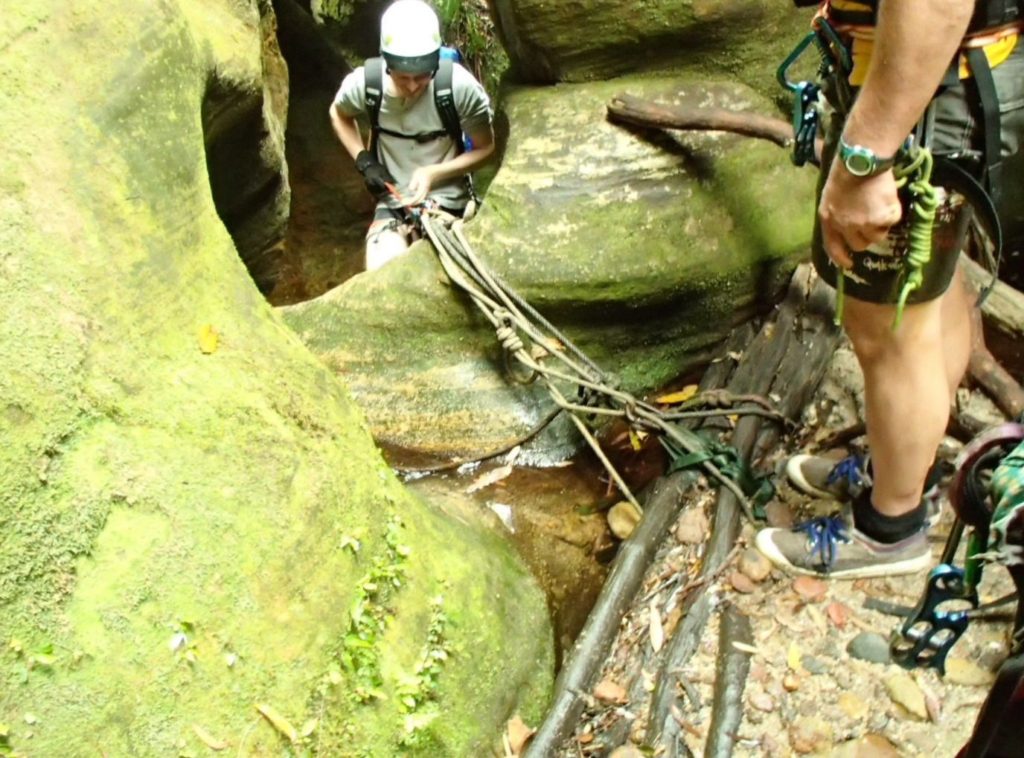 This abseil drops into a deep, water sculpted room where, sadly, a full swim was unavoidable. Only Elizabeth wore a wetsuit – the rest of us just complained to keep warm. 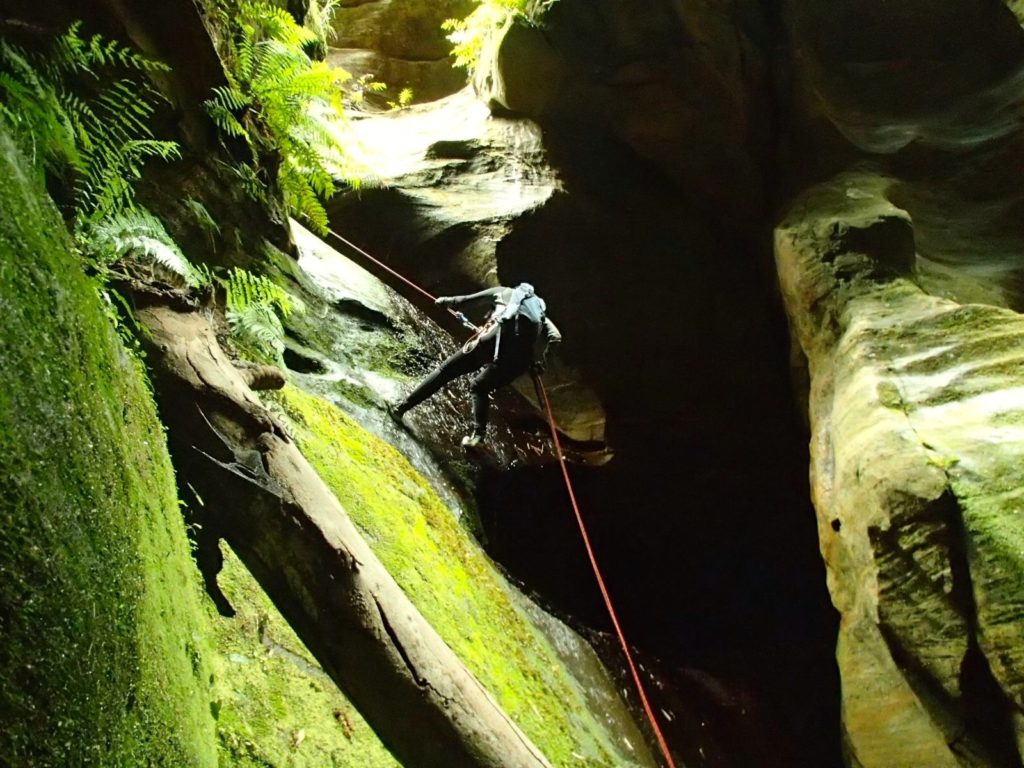 The nicest part of the constriction follows, with a couple of short abseils leading to the canyon mouth. 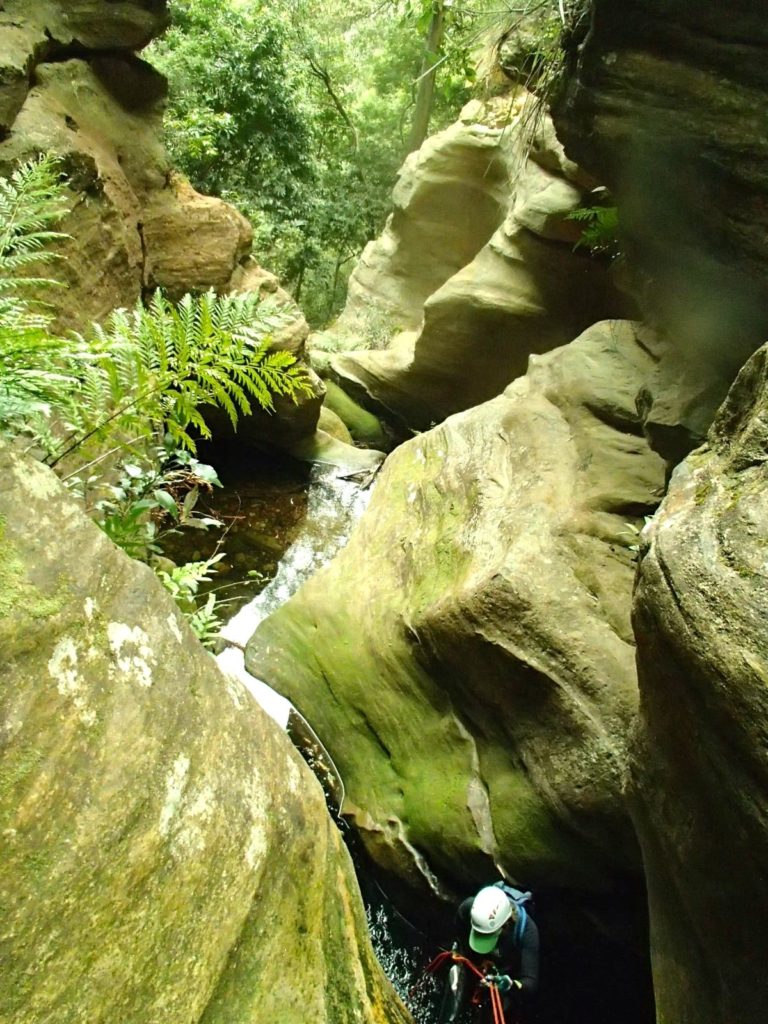 The final abseil, out of the mouth of the canyon, has a very tricky start because the anchor is set far off to one side. There’s a big boulder, undercut at the back, right in front of the abseil and it would be possible to build an anchor on this with a few metres of tape. Once again, my panorama function did something weird. Is this only when I photograph Marty abseiling?

Once out of the canyon we changed into dry clothes and had lunch. 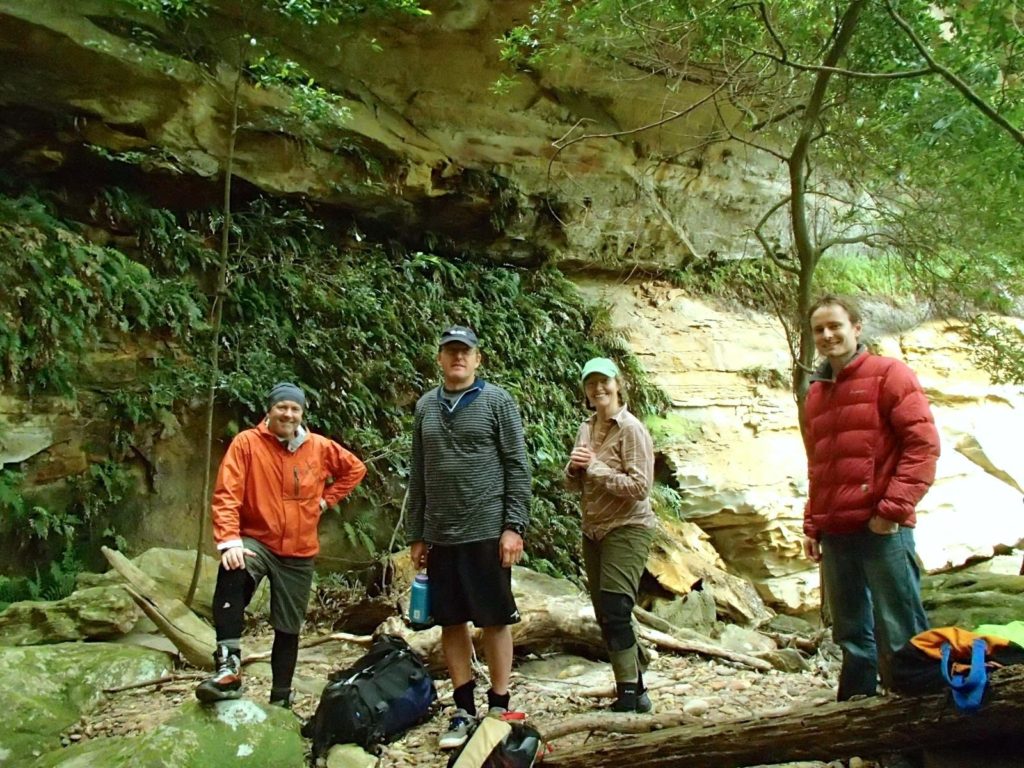 We left camp at 08.30 and it was now 15.00. We chose Pipeline because it’s short trip and would leave plenty of time to drive back to Sydney. From the end of the canyon about 750m on a narrow track along the cliffline brings you back to the Pipeline track and home. We would have been back in camp by 16.00, but a nameless canyoner decided to drop a bag. Here is Marty pointing to the bag lying 100m below in the valley, and Tim taking a GPS fix to help recover it later. 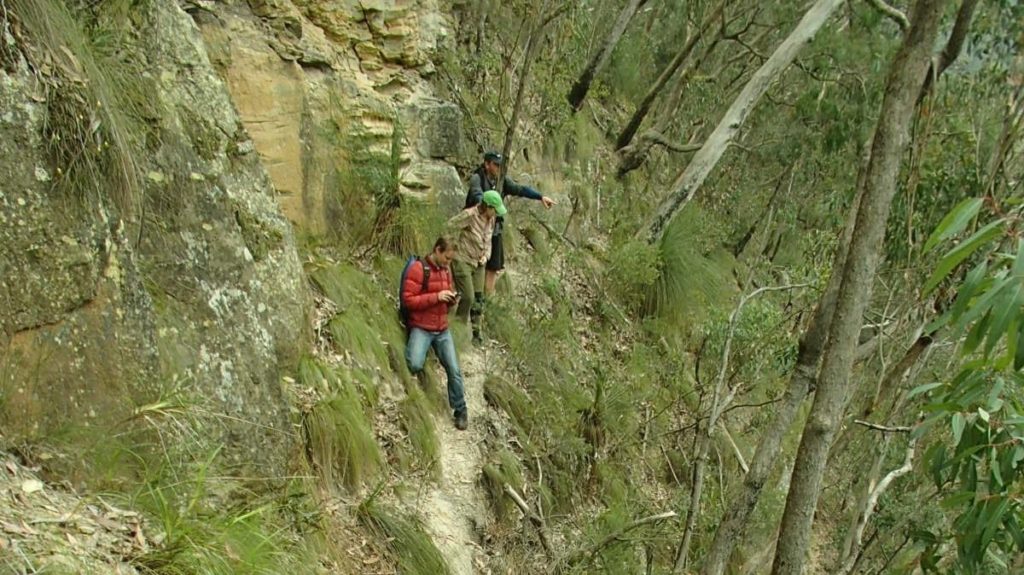 Even with recovering the bag and other messing about, we were packed up and on the road home by 18.00. During the bag recovery I had a lovely close encounter with a wombat. He was obviously very habituated to humans and ignored me until I could wait no longer and had to walk past him. Even then he only took three steps off the track! Later I had a lovely view of an echidna, but I had put the camera away by then. The Newnes wildlife is absolutely first-rate. 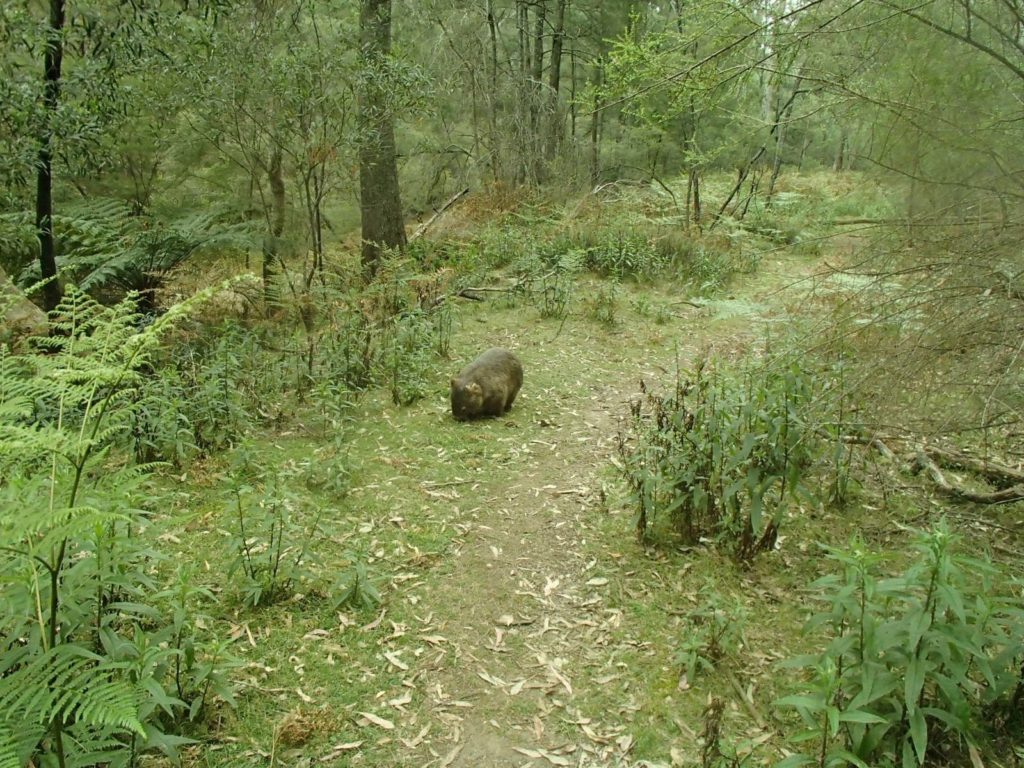 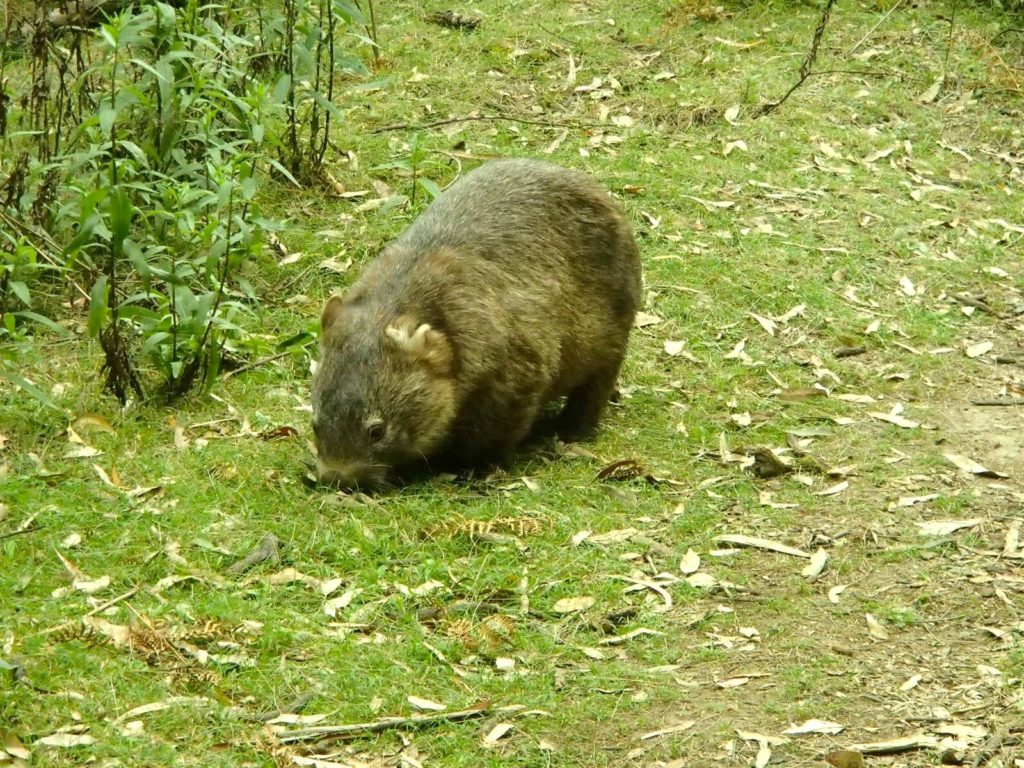 A great weekend away – and thanks to everyone else for putting up with my invalid pace.