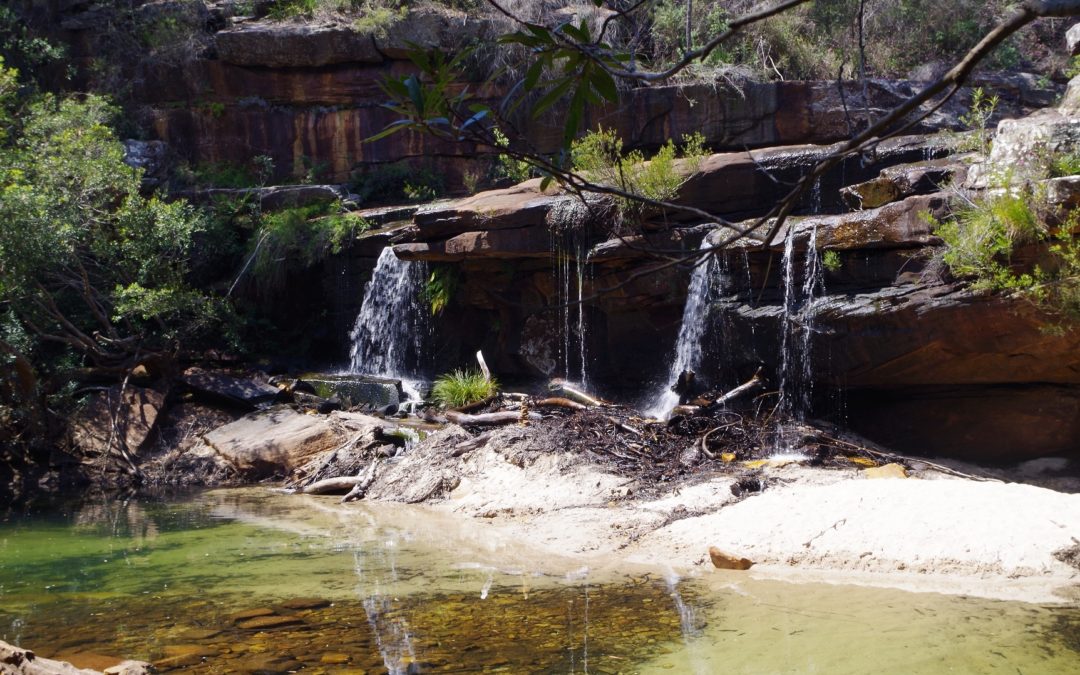 This was an interesting exploratory walk which ended up being a good day despite some initial setbacks due to communication problems. For a start, it had to be postponed for a week due to the hot weather on the previous weekend.

Four of us (myself, Bruce Li, Alex and Yang) all assembled at Central Station for the trip to Loftus. Unusually we had to take the Airport Line to Wolli Creek and change there for the normal Illawarra Line train to Loftus. This was because of trackwork. Although I asked everyone to be there for the 8.09am train, we 4 were there early so could have caught two earlier trains which would have meant a more leisurely connection at Wolli Creek. Laura E and Daniel had yet to arrive however, and I sent Laura a text to find out if she was close to the station. When neither had turned up we just got on the 8.09am train. Unfortunately this train was delayed several minutes after leaving the International Terminal and we ended up missing the Loftus train by 3 minutes with 25 minutes to the next one. I texted Catriona who was getting on at Rockdale and Cathie at Sutherland to let them know we were delayed. We got on the next train a few minutes later which was actually a Cronulla train.

Due to missing the intended train we were going to miss the connection with the tram at Loftus to the National Park, and they run only every hour. There was, however, still a fall back – Cathie had her car at Sutherland and we could drive to Loftus with just enough time to get the tram. Alas, Cathie had left her mobile phone at home and was uncontactable! Meanwhile Laura had phoned me to say that she couldn’t come as something had come up, and that she had sent me an email earlier.

On arriving at Loftus, we found Cathie who had taken advantage of the delay to pick up a coffee, but the tram had gone. As the next one wasn’t for 50 minutes we had no option but to set out on foot for the National Park entrance. This meant crossing the hazardous Princes highway which has no pedestrian crossing. We just had to wait for all 4 sets of traffic lights to turn red in sequence before crossing the road, which took a bit of time.

Almost directly across the road from the lights a track goes into the bush and eventually meets up with a fire trail which runs alongside the tramline for about 2.5km. On reaching the end of the Line we were by then 40 minutes behind time and the thought occurred that the walk might have to be just to Winifred Falls and then return to Loftus. Still we decided to see how we went. Not far from the end of the line the “Honeymoon Track” starts which quickly drops down to Audley Weir. We cross ed weir and proceeded to the Visitor Centre at Audley, and directly across the road was the start of the track to Winifred Falls. This track is quite rough and goes steeply up for a while before levelling out into heathland until eventually reaching Warumbul Road which it crosses. We noticed a few cars parked there, belonging to people getting the Winifred Falls the easy way. The weather was very warm and sunny and we were glad we didn’t do it on the hot long weekend (on which it was originally planned). From Warumbul Road the track continued through heathland, and despite the recent hot weather there were several quite muddy sections along the track. Suddenly it started to drop down steeply and in an area of taller trees. Eventually it came out at the top of Winifred Falls. We made our way down to the pool at the bottom and noted some tourists who were paddling in the pool. By then it was 1230pm so we had made good progress.

Also, a pleasant sea breeze had now come up and kept us cool for the rest of the walk. We had lunch here and then went back up to the top of the Falls to look for the track to Anice Falls. I was using the “Wildwalks” description of the track which included looking for a “grass plant” (a grass tree -Xanthorrhoea I assume). I saw no such plant and decided to search along the creek upstream from the falls for a track on the opposite side. After a few false leads I found one at a point over 50 metres upstream and where the creek crosses over a fairly wide rock shelf; this could be crossed mostly on dry rocks but in a couple of places putting your foot in the shallow stream is inevitable.

This track is quite rough and stony and goes uphill for a while then levels out for a while passing through lots of Casuarina trees. Eventually we reached the intersection with the “Mt Bass trail”. This was a decision point as although we had made good time we had to find out if we could get to Bundeena in time for the last ferry (if not we would have to return to Loftus). Alex phoned the Cronulla Ferries and we were relieved to find that the last ferry was 7pm. We then decided to push on to Bundeena. We continued straight ahead to reach the top of Anice Falls. These falls are higher than Winifred Falls but a good view of them is not really possible from the top, and there is no obvious track to the base of the falls. The creek feeding it is in any case not with much water so it is not that spectacular.

After a brief stop at Anice Falls we then found the track which goes up the hill towards Maianbar Road. It is like the others steep and stoney at first before levelling out and passing through quite dense scrub, which at some points arched completely over the track. Again there were several muddy stretches from water coming out of hanging swamps. We went along this track for quite a while for almost 1.5km until reaching a clear track to the left. This track goes to Maianbar paralleling the road for its whole distance but keeping out of sight of that road. (It is described in a comment on the “Wildwalks” notes: “Loftus to Winifred Falls”). It appears to be well maintained and there were mountain bike tracks on it. It went for quite a distance – about 4km – and crosses three fire trails. Along the way there are views of Port Hacking and the suburbs of The Shire on the other side. It was too hazy to see the Sydney CBD. At each fire trail the track does not cross them directly but resumes about 10 metres to the left down the track. Between the first and second fire trains a track branched off to the left but I didn’t take it – I have no ideas where it goes.

Eventually the track ends at Maianbar Road, and I looked for the track on the other side of the road leading down to the waters edge at The Basin. One track looked promising at first but turned out to be a mountain bike track with practice jumps and which went to a dead end. Retracing our steps we returned to the road and found the proper track descending the hill just behind a bus shelter 100 m further down the road. This track continued down the hill in a meandering manner passing through some small Cabbage tree palms until reaching the waters edge. We turned left and followed this track which more or less follows the shoreline for some time. At one point it appeared to peter out and I worked out that it was crossing a mud flat for a short distance before resuming a proper track. I suspect that in a king tide this section would be under water.

Eventually we reached the pedestrian bridge over the basin and then reached the Bonnie Vale camping ground via a wide track (It appears that this track is the main access to Bundeena by Maianbar residents). Then it was out onto Bundeena Road. We eneded up at a cafe were we bought refreshments and had a break.

Meanwhile I had checked my webmail and sure enough there was Laura’s email – sent at 2.06am that morning. From about Maianbar the sky had started to look cloudy but there was no rain until we got a few spots while waiting for the ferry. The ferry got us to cronulla with 7 minutes before train time. We said goodbye to Cathie at Cronulla, and Catriona got off at Rockdale, and the remaining 4 of us got out at Wolli Creek for the trackwork replacement trains on the airport line. The delays we had experienced in the morning appeared to be continuing as the trains continued to be late. We eventually arrived at Central just as a rain storm started. So we had good luck with the weather.

Despite the false starts with the train delays and non appearance of a couple of walkers, it turned out to be a good day. I had never been on this track before and it was a good exploratory experience (have to give some credit to “Wildwalks” track notes). I had also never been to Bundeena before and I expected it to be full of 1950’s holiday shacks and hippies. There were some of each but there are also a lot of expensive houses as well.

I’m not sure of the distance of this walk, but it’s about 18km. Yang’s GPS said it was 24km but sometimes GPS overestimate distance.
I think that if a walker leaves Loftus at 1015 and uses the tram (which also cuts off 3km from the walk), it would be possible to reach Bundeena by 4pm.