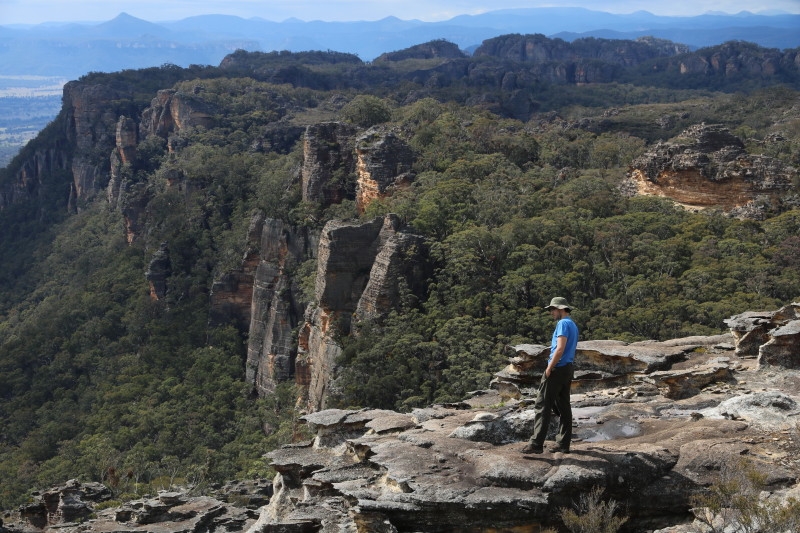 The name “Red Rocks” refers to a section of the Wolgan Capertee divide in the Wollemi National Park near Newnes in the Wolgan Valley. This SUBW trip to the Red Rocks covered the main scenic section of the Red Rocks, as well as Mt Dawson and an approach ridge and an exit gully. One thing that is pretty much guaranteed on this route is high camps, great views, some scrub, and route finding challenges for those who haven’t been there before.

It ended up being just four of us on this trip so on Friday evening we travelled to Newnes in one car and pitched our tents just outside the main Newnes campground. Although we arrived to cold starry skies, there was some light rain during the night and we woke to overcast conditions and the hint of drizzle. As it was Kaushi’s first time to Newnes I had hoped for a typical Wolgan Valley morning, with the splendour of cliffs on all sides, with the highest trees catching the morning light, deep blue skies and birds crying everywhere. Instead, low cloud obscured most of the spectacular cliffs, even though the sense that something spectacular was out there was still very present.

After a camp breakfast we packed up and by 8:30am we had set off. The first half of the day was probably the most strenuous of the weekend as we had to climb steeply out of the valley up a steep slope with no track. We sidled some cliffs and then used a hand line to get all people and packs up a slippery log that was the only way up through a small line of cliffs. Once this obstacle was breached it was an easy climb to a high platform from where superb views down into the Wolgan Valley were beheld. The air was still and we could hear voices far below, their sound carrying easily through the open void of space between them in the valley far below and us perched high on the clifftop. Those voices belonged to Chee, Cathy and Leah, SUBW members on a separate private trip.

From here it was relatively gentle ridge walking, although there were patches of scrub and some complex rock formations that required careful route finding. We passed a delicate arch formed by the strange way that this sandstone and ironstone erodes over time. We worked our way to Mt Dawson and by the time we reached the summit the clouds had well and truly lifted. The overcast morning had given way to a cool but sunny day with scattered clouds and 360 degree panoramic views. Here was a great place for lunch. Our water supply for the weekend was guaranteed too, as we had passed several small clear rock pools on the pagodas thanks to the recent rain. None of these had water more than 1.5cm deep but by taking small cupfuls at a time we could draw more than enough water from these tiny rainwater pools to last us for the remainder of the weekend.

After lunch began the Red Rocks traverse proper. The route is varied and complex, following the top of the range where possible with the Wolgan Valley on one side and the Capertee Valley on the other. Whereas the Wolgan is a deep incision into the Earth’s crust with close cliffs and narrow gorges, the Capertee by contrast is a vast expanse of open space with farms, ridges and distant plateaus and escarpments. Pantoneys Crown is a dominant feature in this open landscape, and to the north the deep green and rugged ranges of the Coorongooba Wilderness could be seen. Squalls of rain came and went and added drama to the landscape as small areas of the panorama took turns at being shrouded in cloud. Our route involved some careful route finding among the complex pagoda country. We stopped for photos at a defile where there were camp caves, tall trees and a carpet of leaves.

In the late afternoon we met Chee, Cathy and Leah heading in the opposite direction and we pointed them in the right direction south along the range. Then we decided that here would be a good place for us to camp, with its spectacular view out to Pantoneys Crown and sheltered comfortable camp sites among the bushes and trees. A cheerful little fire was got going with the abundant supply of firewood and there was time to climb onto the pagodas for more panoramic views.

The evening was a little damp at times but any drizzle was intermittent and very light and we stayed up around the fire until time for bed.

Next morning was cloudy and cool with a southerly breeze blowing, creating conditions more akin to late winter than early spring. We continued along the Red Rocks, admiring the spectacular views the whole way along this section. We descended a steep pagoda that was exposed in places but with a series of steps to make it easy to get down. Then we dropped our packs and headed to The Room. This is a popular campsite with 2 corridors among the cliffs. We sat on The Balcony for a while and admired the views one last time. We then returned to our packs.

By now it was mid-morning and unfortunately it was time to make our way back to Newnes. We easily descended Little Capertee Creek and found a lovely open flat grassy spot for our lunch which we took at leisure. From this lunch spot it was an easy walk back to the car. At Newnes James and Mark took a dip in the shallow waters of the Wolgan before we headed back to Sydney.