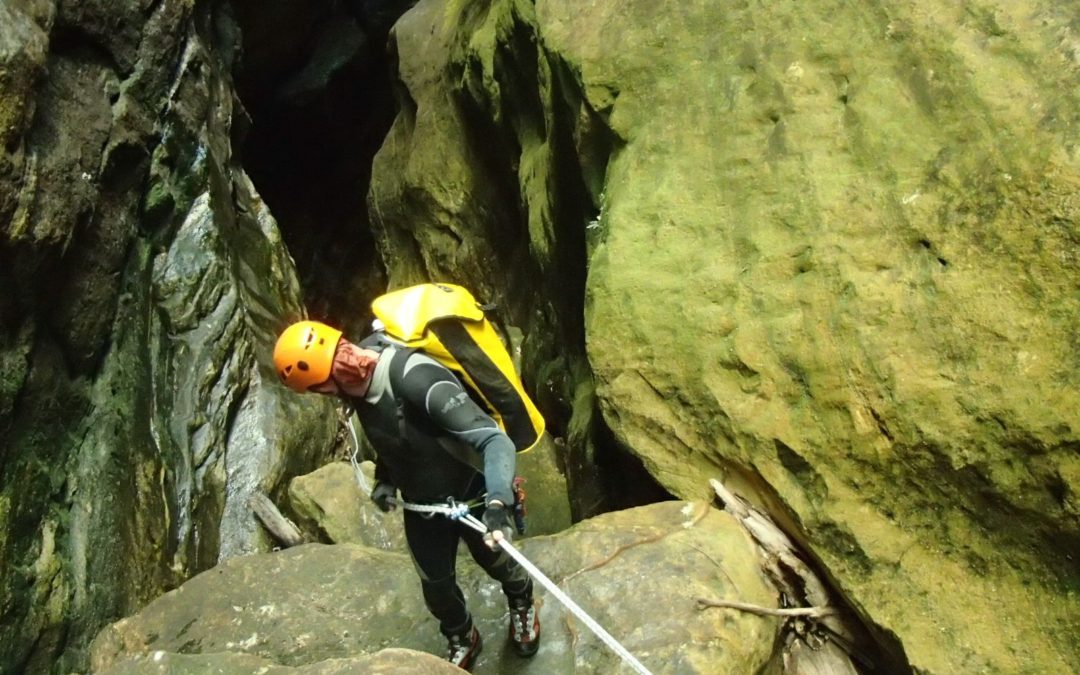 I joined four other members of SUBW for the first canyon of spring We met for a hearty breakfast in Leura and were on the track a little after 10.00. 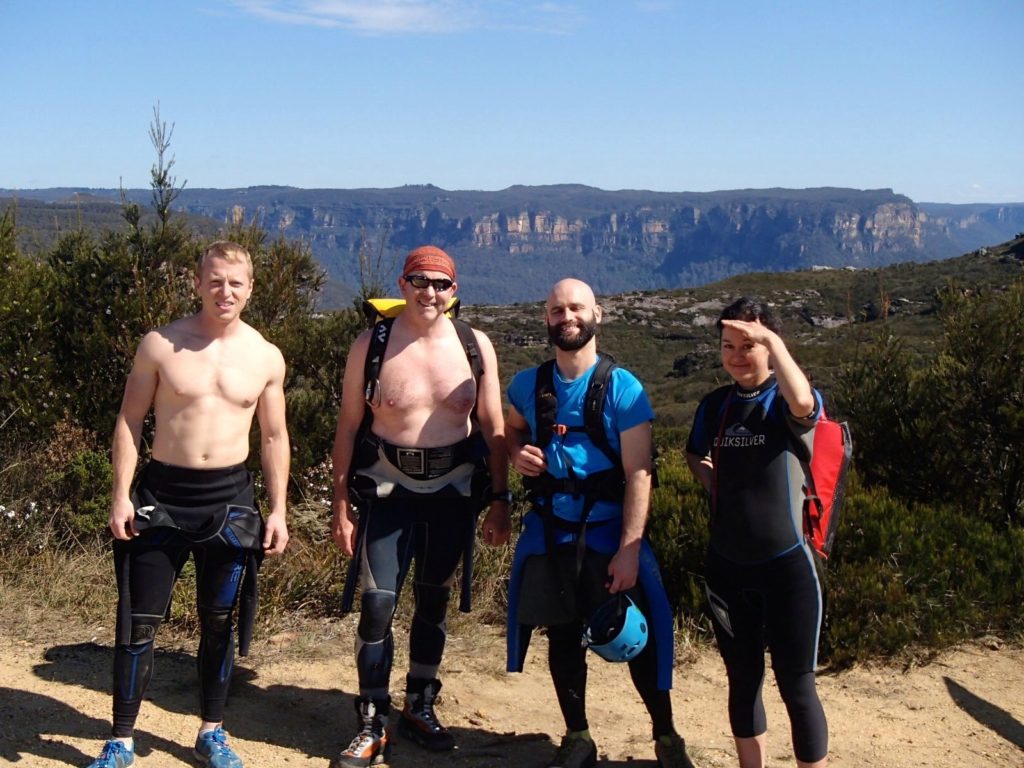 Since my last visit in June NPWS has installed a big explanatory sign about the canyon, and has signposted a new entrance track avoiding the swamp. This brings you exactly to the short drop into the creek, where there is a nice new fixed rope to climb down. 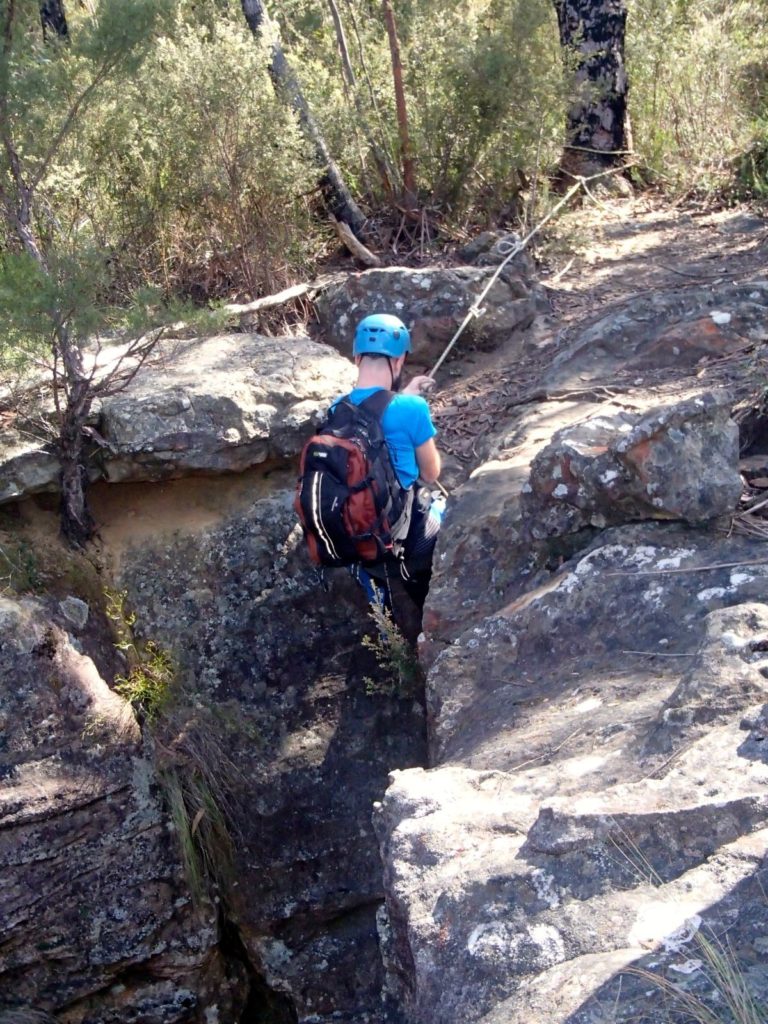 It was a beautiful day – in the 20s even high in the mountains – and we were glad to get down into the cool of the canyon. A short walk brought us to the first abseil, which has a tricky start. Last time we just walked down the creekbed using the abseil rope as a safety line, but the surface of the waterfall was quite remarkably slippery this time, so we were glad we did it properly. The first abseil is immediately followed by the second, which is tiny, and then some more creek walking to the third abseil, which can be bypassed by shimmying down a log. 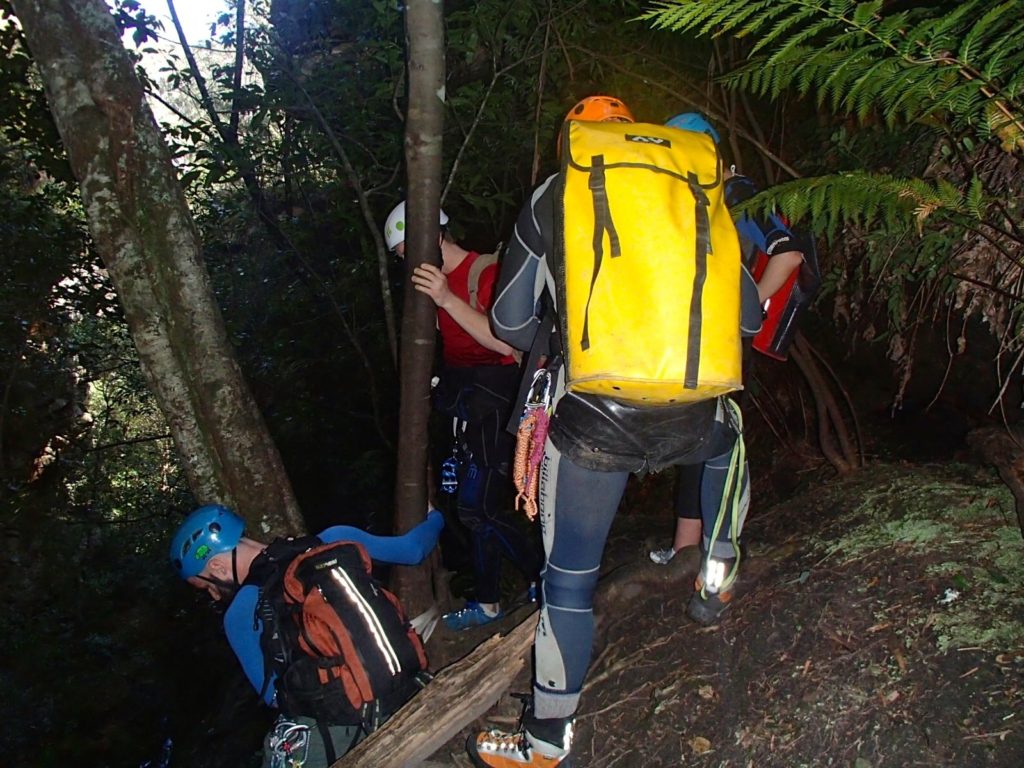 Immediately after this came the first swim. The water was really cold, maybe even down to single figures, and the
canyon resounded with our complaints. 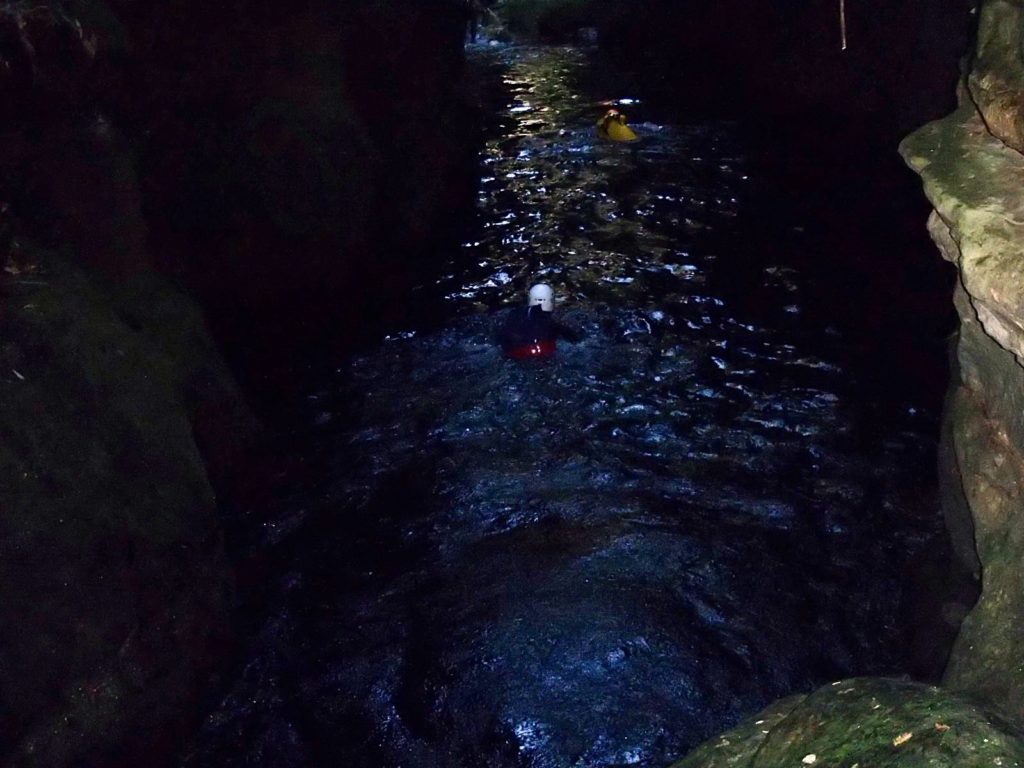 A bit more walking and we were at the abseil leading to the main drop. As we were setting up the abseil, Jon was
checking out the alternative, a water jump of at least eight metres through a dark slot into a big pool below. 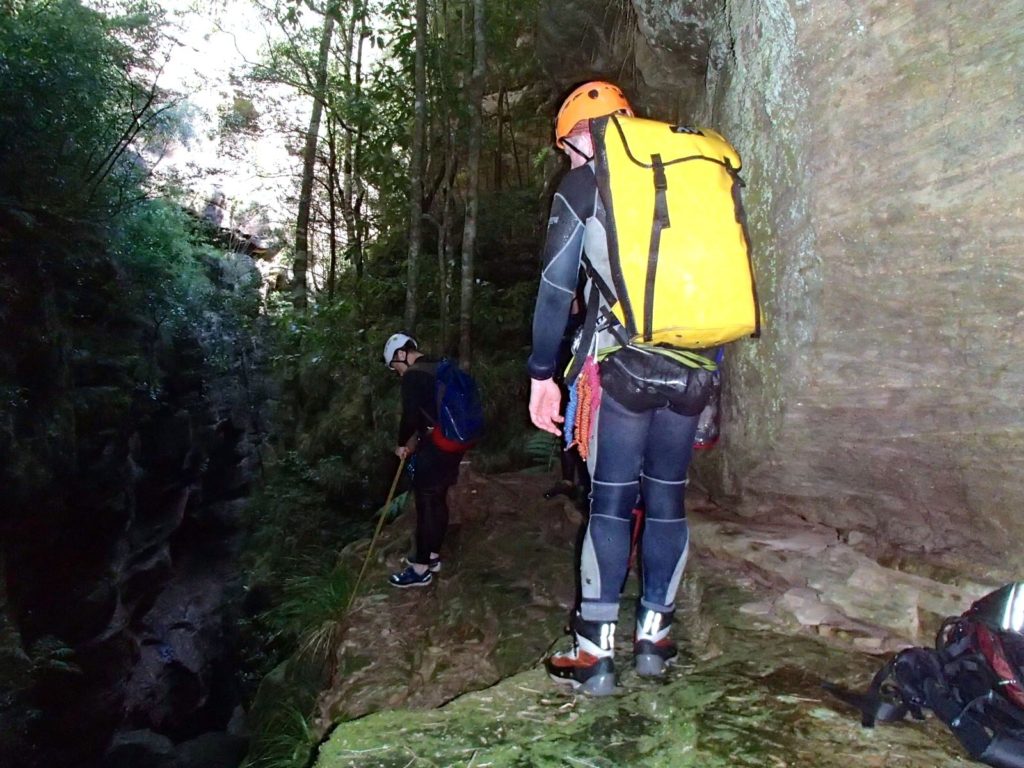 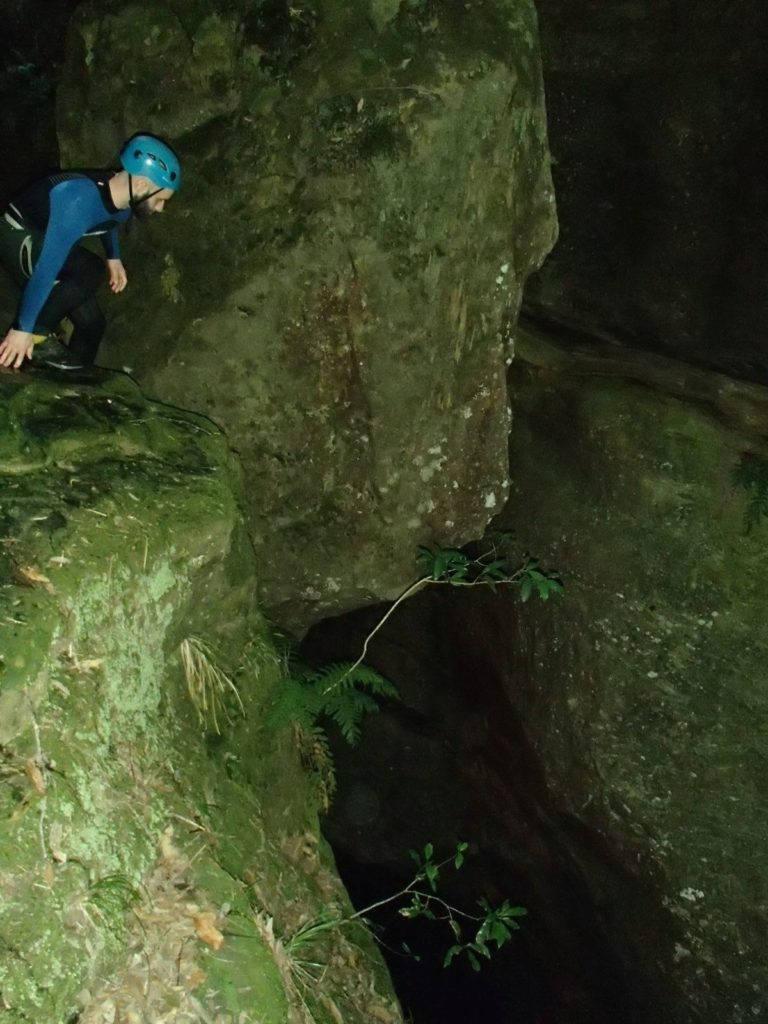 There was a good view down into the water and no obstructions, so he decided to do it, having not done so last time he did the canyon and having regretted it ever since. Now I’m in the same position, because it looked amazing. 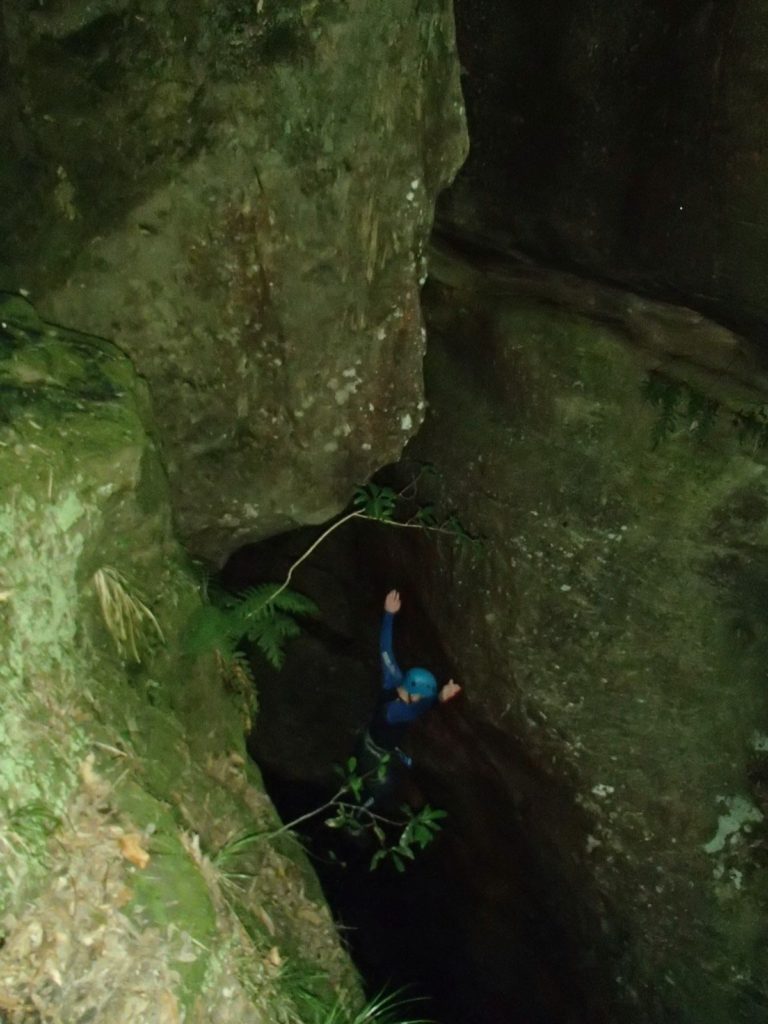 Then we headed down the first half of the main drop to the chockstone. This it the real highlight of the canyon, and was as enjoyable as usual. We had two ropes, so we could go through in a line, rather than getting everyone onto the chockstone at once, which gets very crowded.  That’s me heading down… 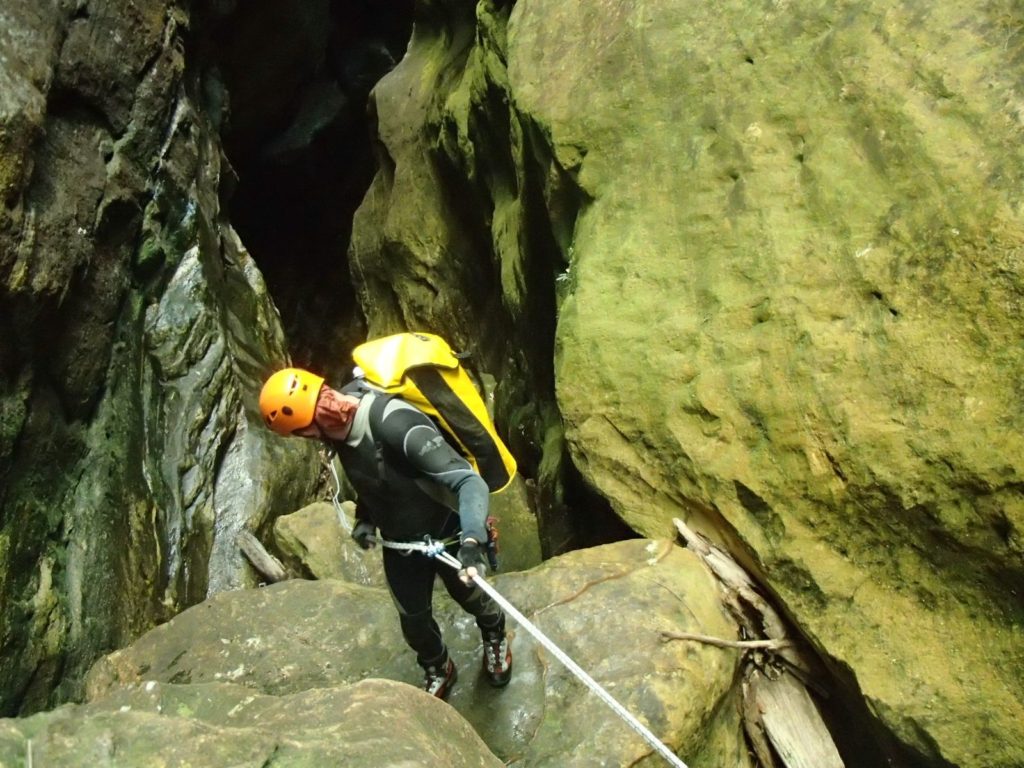 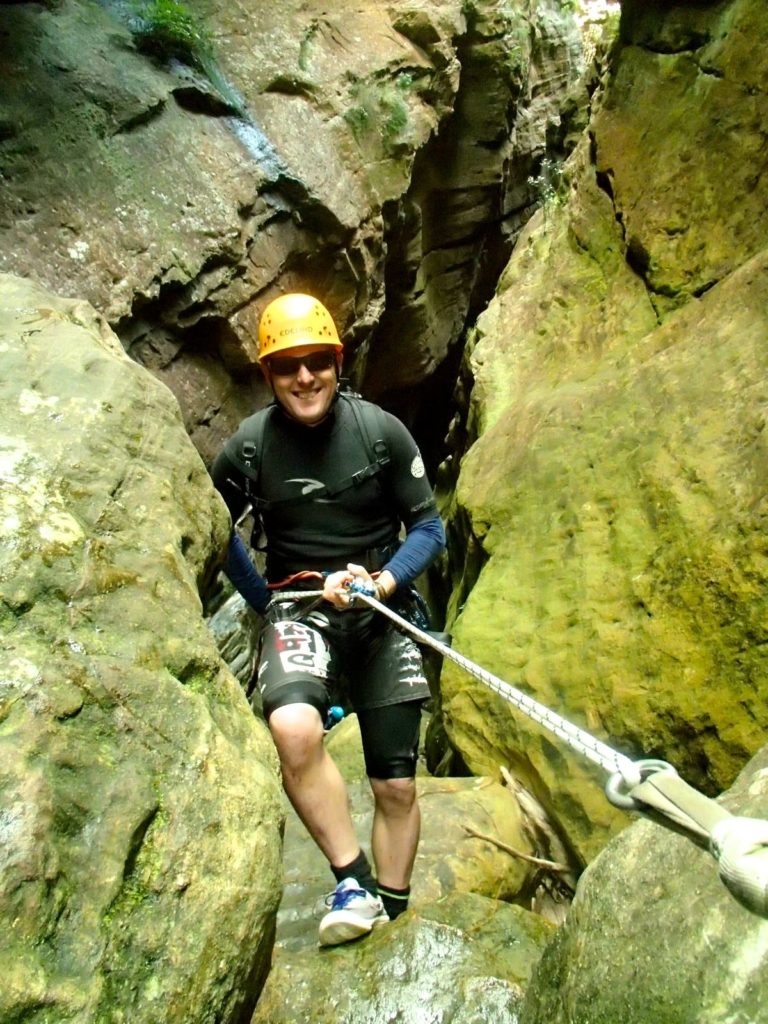 …and that’s Marty. Three of the five of us managed to get caught in the pothole when abseiling the second part of the main drop behind the chockstone. This seems to be about average, but it is definitely worth avoiding this! This is the view from the bottom of the main drop: 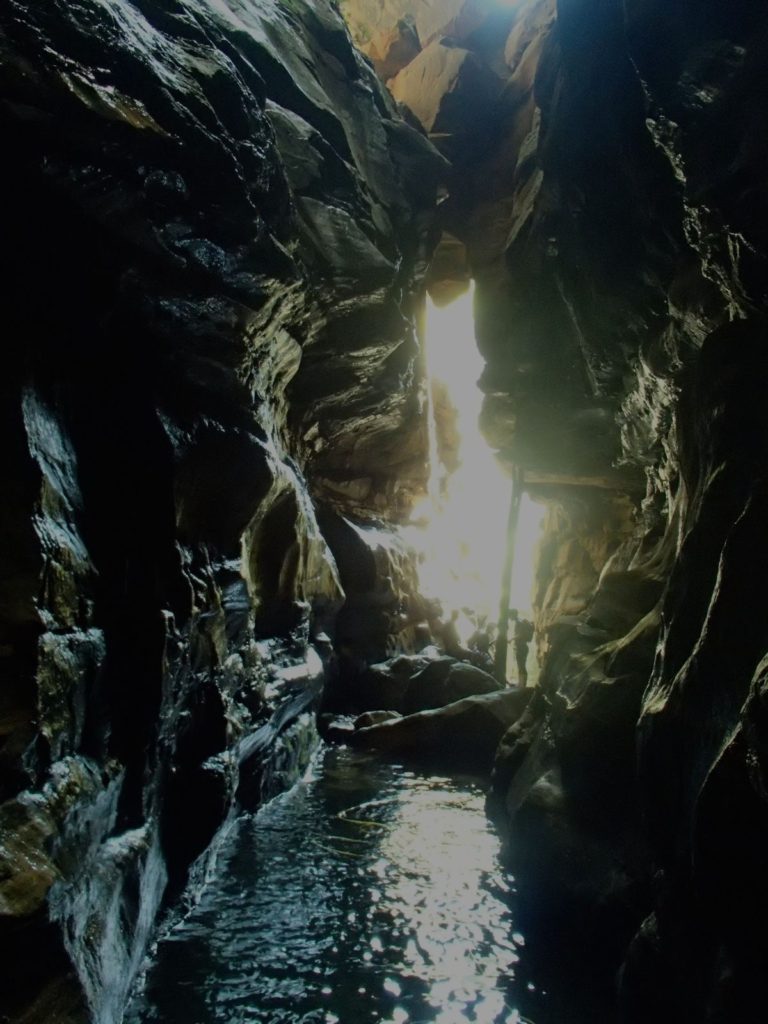 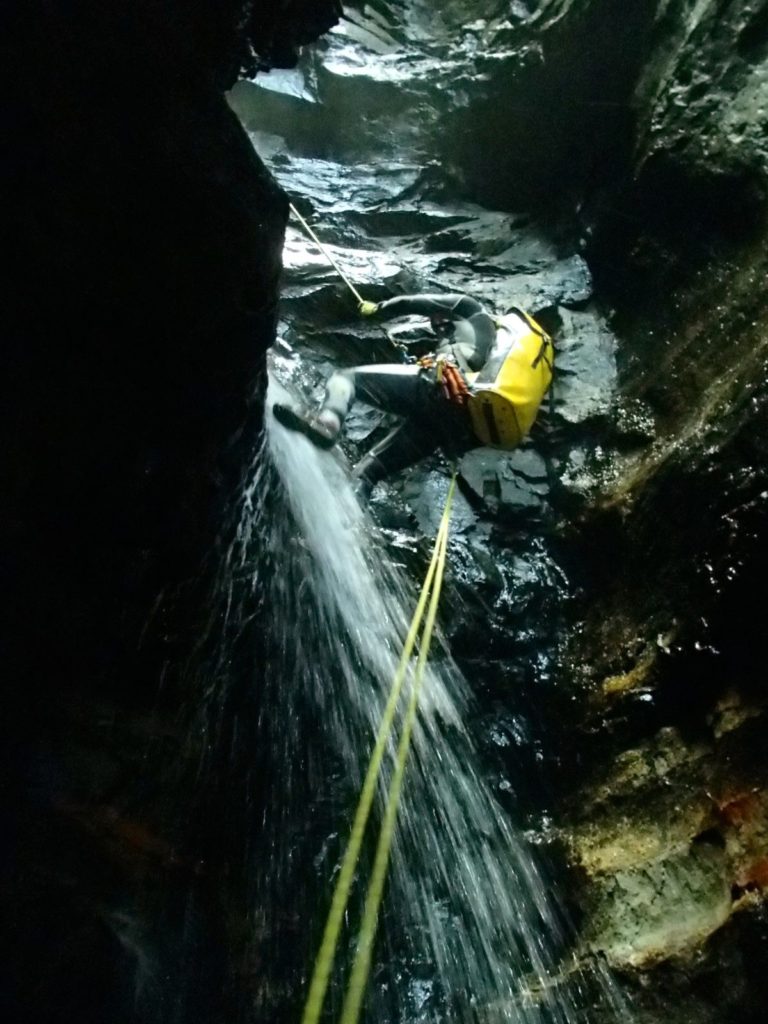 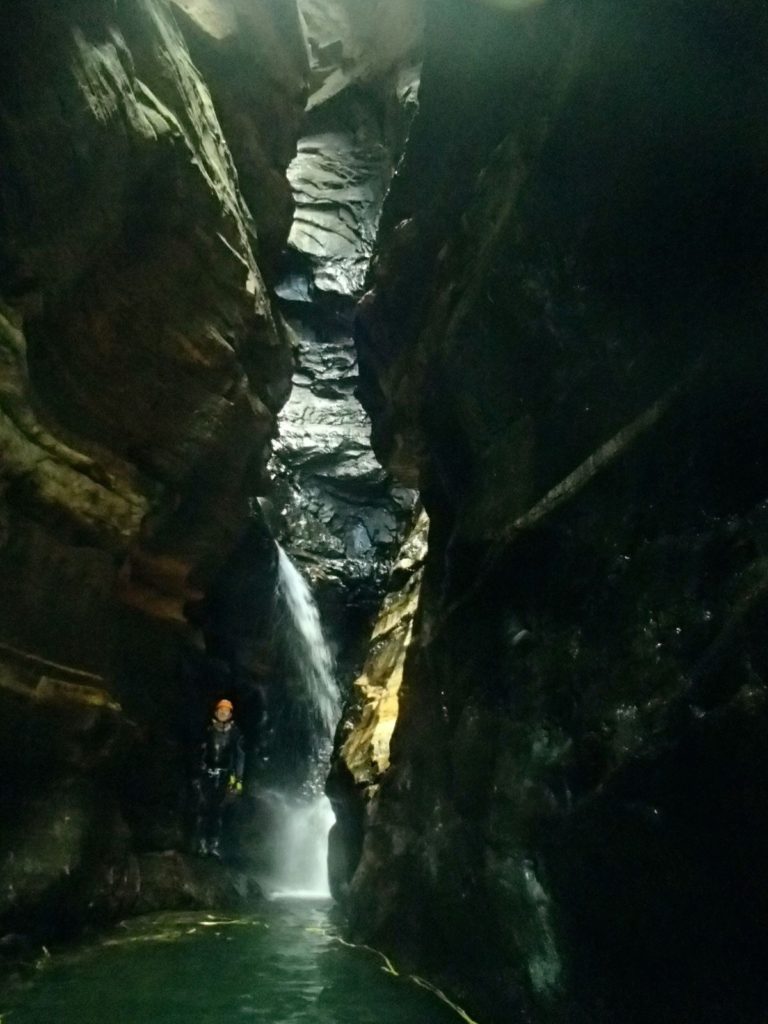 After the main drop was a short, cold swim and then a climbdown/abseil. The broken fixed rope has not been replaced and we did not have a scrap of rope with us to replace it, so we abseiled. 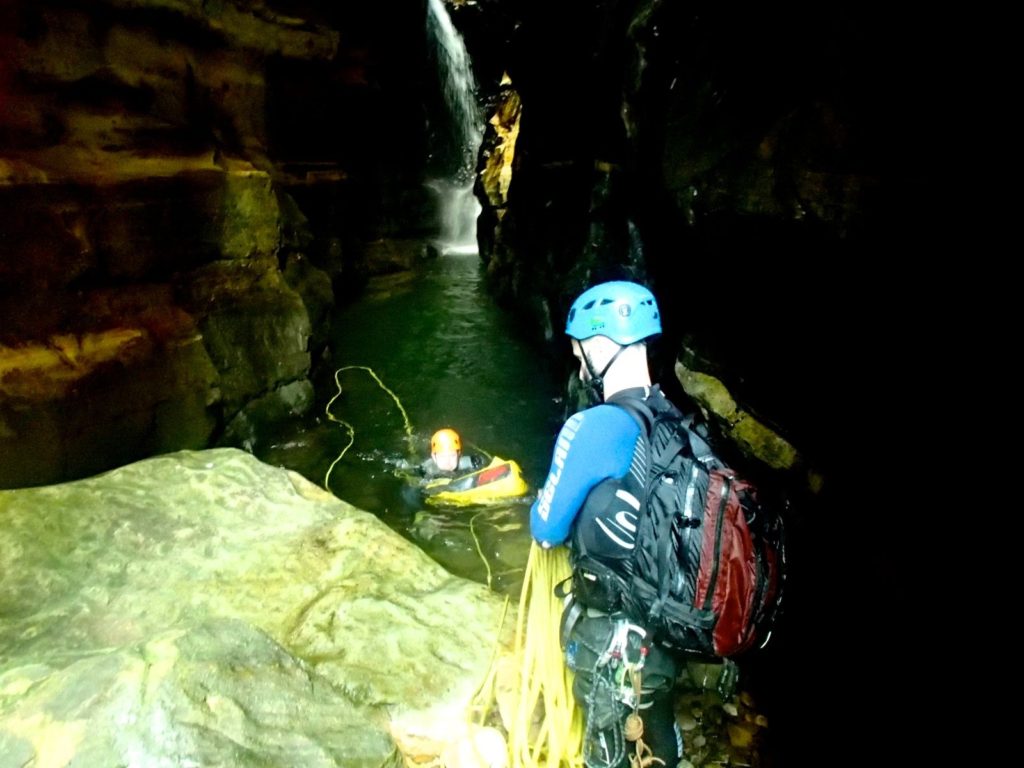 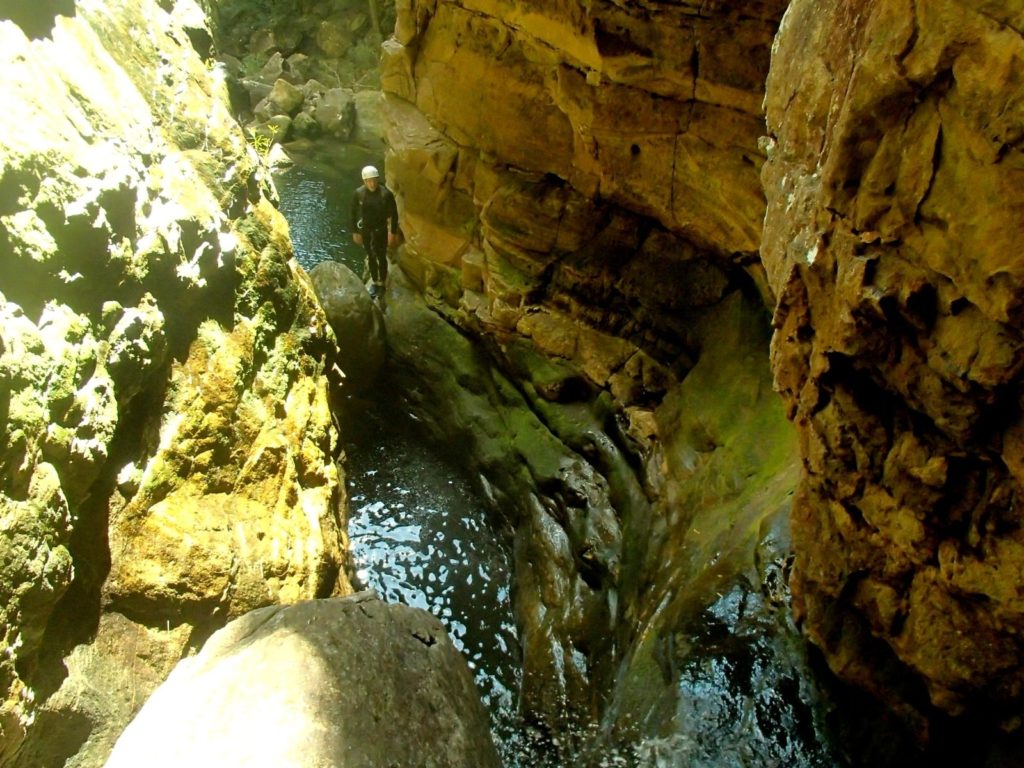 The water in the pool below was just shallow enough for the tall people to wade, and then the constriction section ends with a fun water jump.

By this stage we were pretty cold, despite wetsuits, so we hurried on to the final, straightforward abseil and then took the wetsuits off and warmed ourselves like lizards on the flat rocks at the bottom of the waterfall. It was 25C and blazing sunshine, so the contrast to a few minutes earlier was striking.

Marty at the final abseil and the view back to the waterfall from our sun lounging spot. 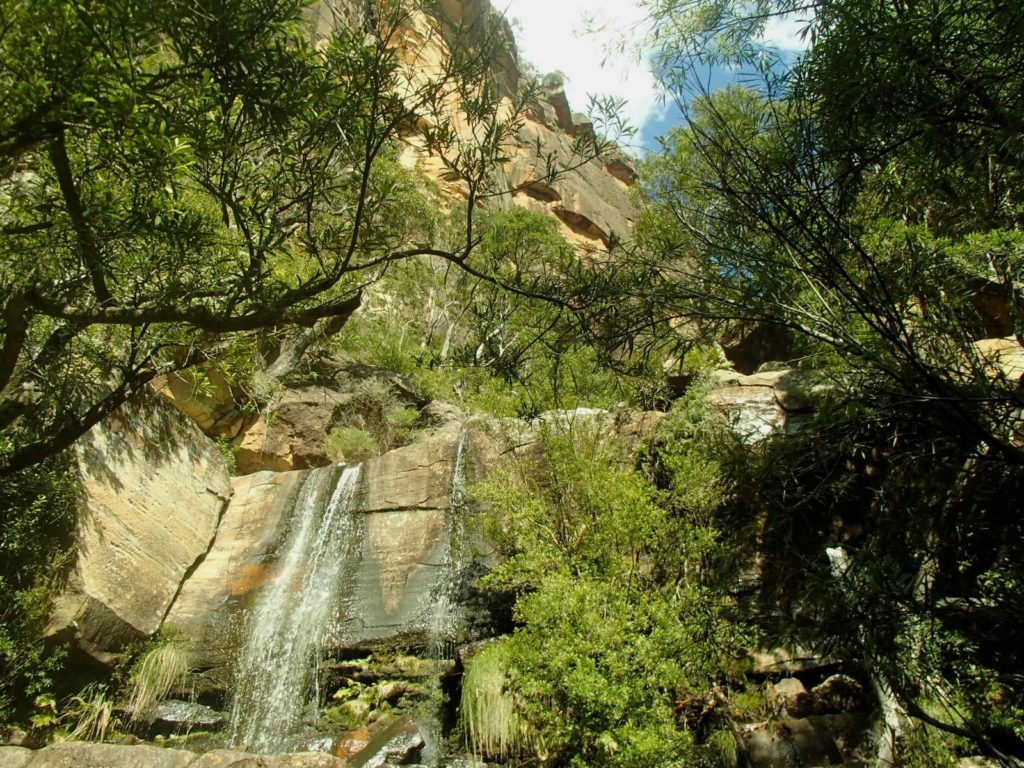 After lunch we changed into shorts and t-shirts for the climb out. 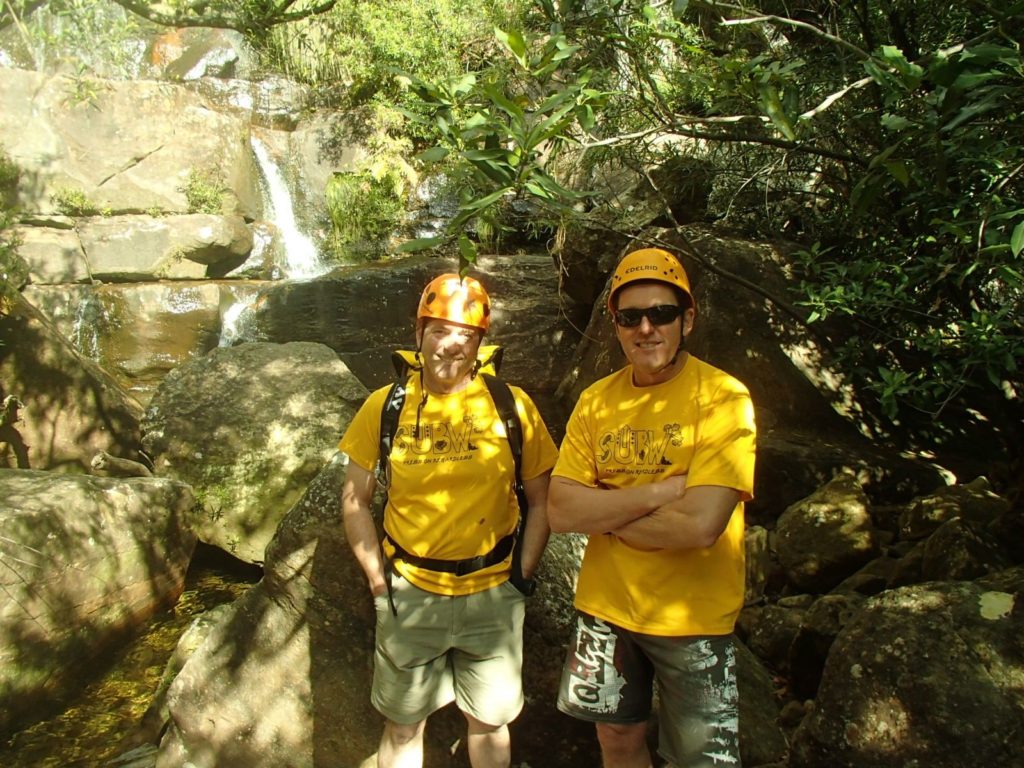 The track is easy to find as long as you remember that if you hit the cliffs you have gone too high. 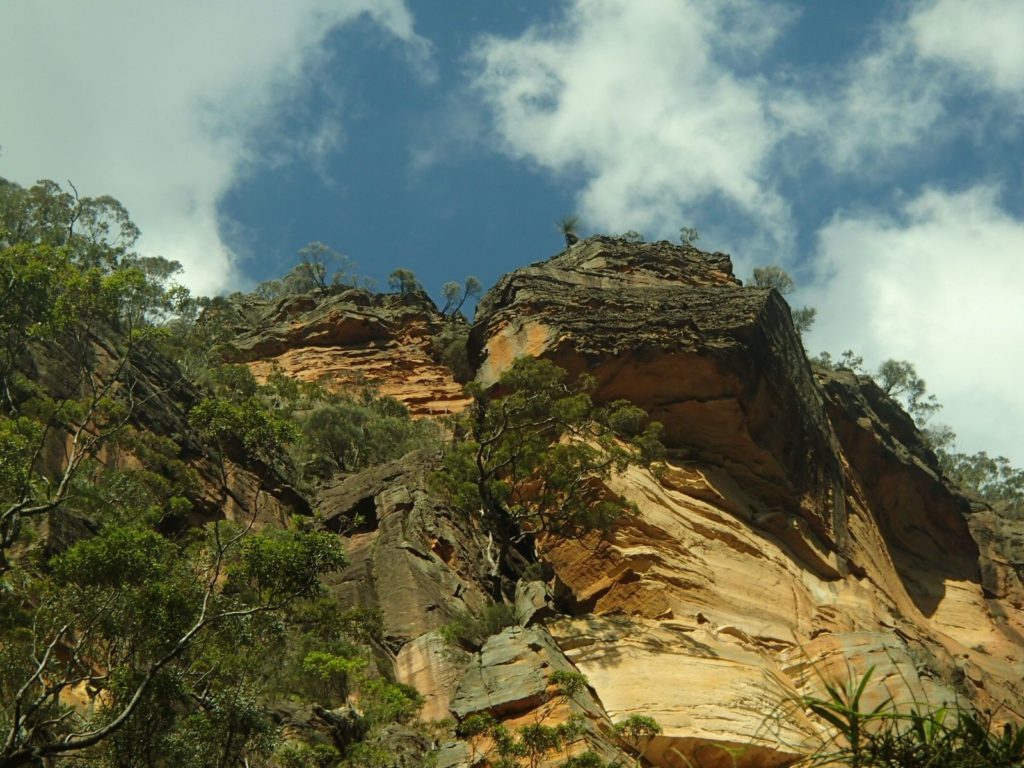 The track winds up and down through the bush before crossing a dry creekbed and  heading up, here: 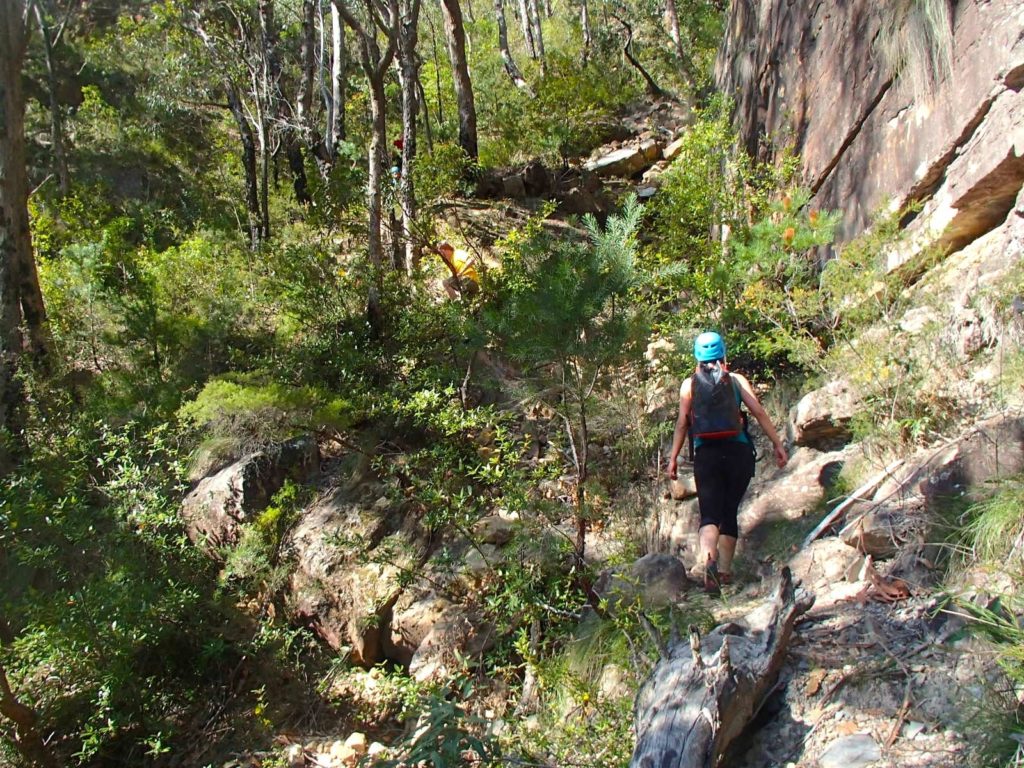 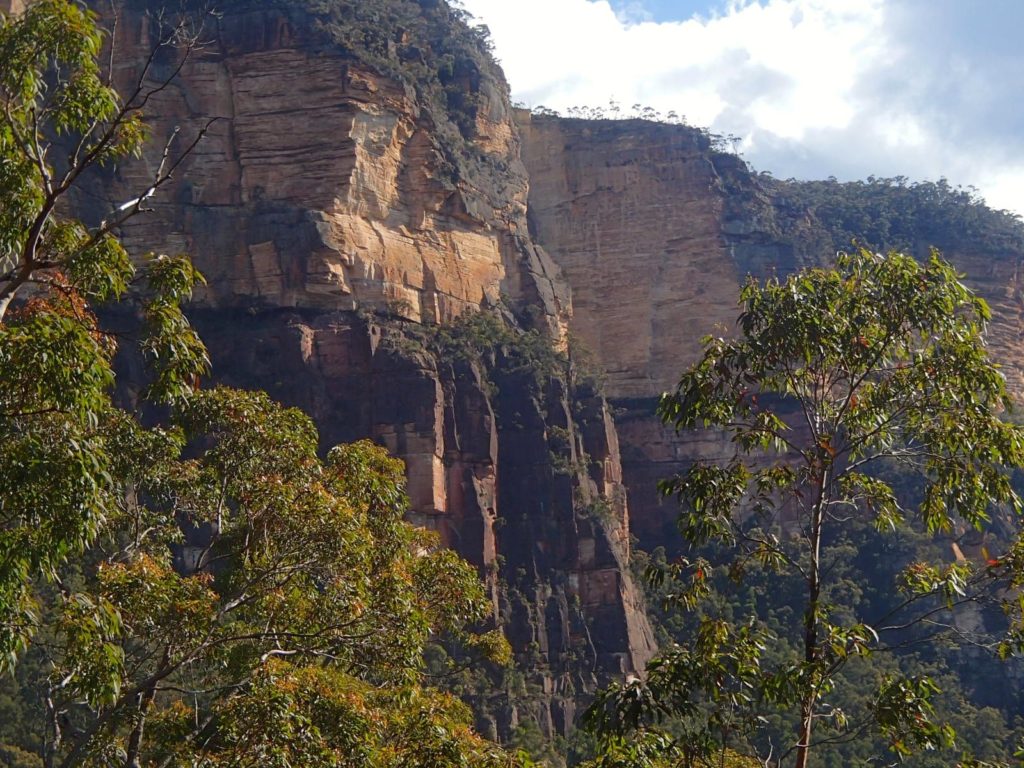 <
It was a beautiful day, with great views of the cliffs opposite, and the wildflowers were particularly good It seemed more like December than September. 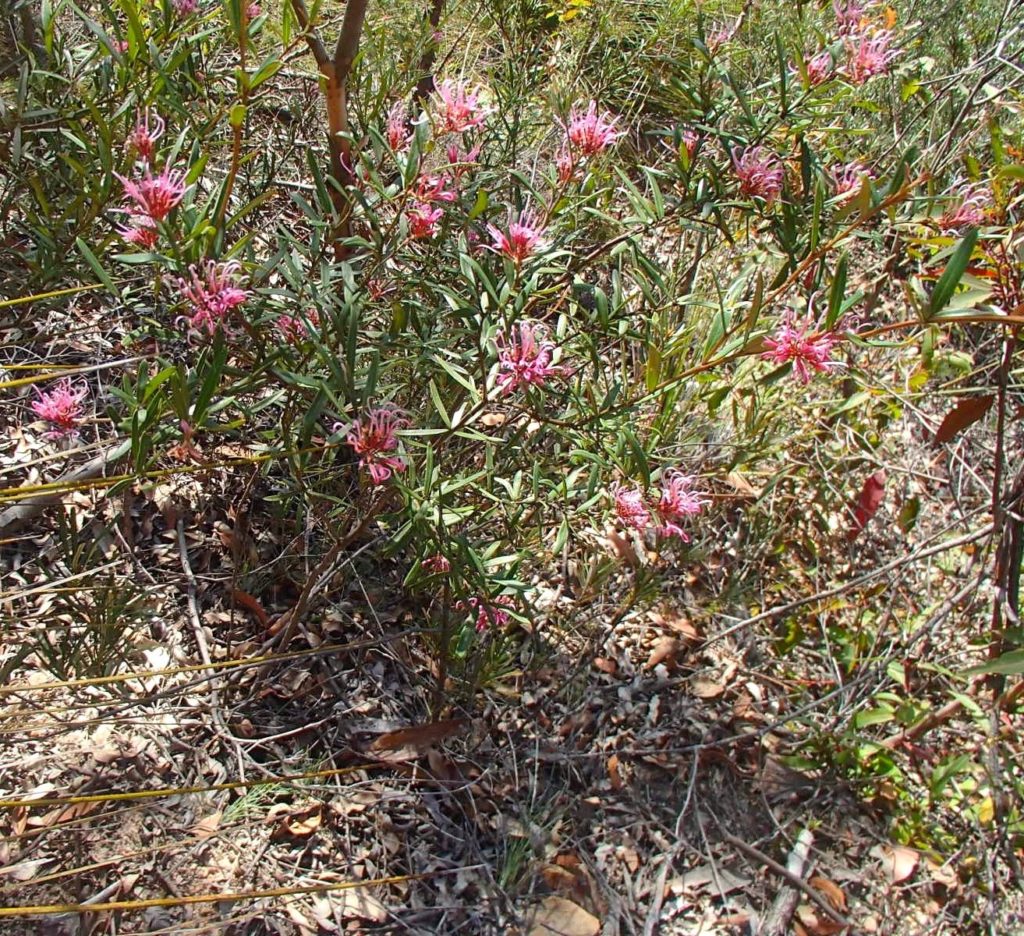 In the afternoon sun and with packs full of wet ropes and wetsuits it was hot work, and I for one was very glad when the track turned to traverse across to the climb. 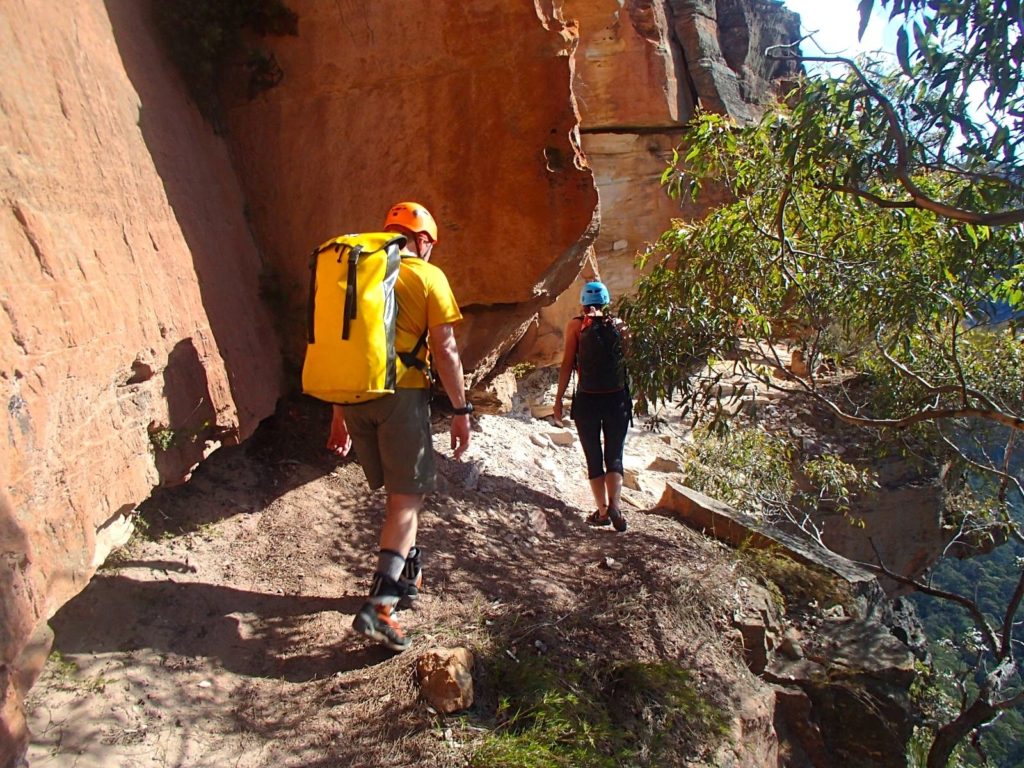 We crawled through the low section of the ledge to the bottom of the climb, and with no further ado Brian headed up with the rope. 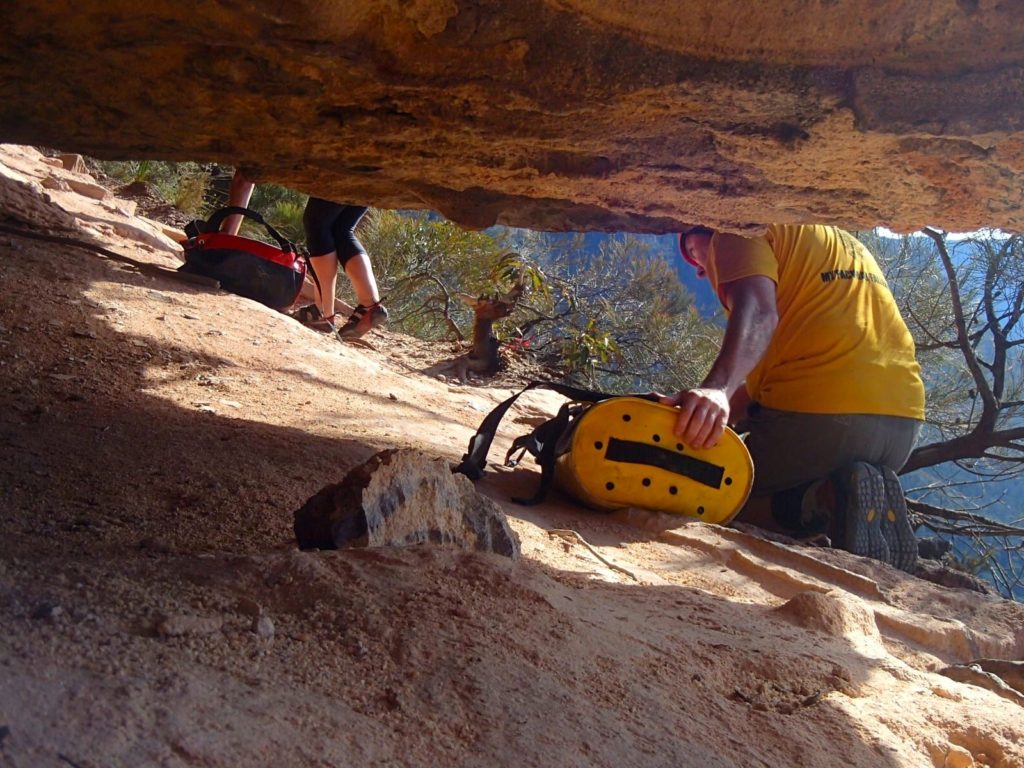 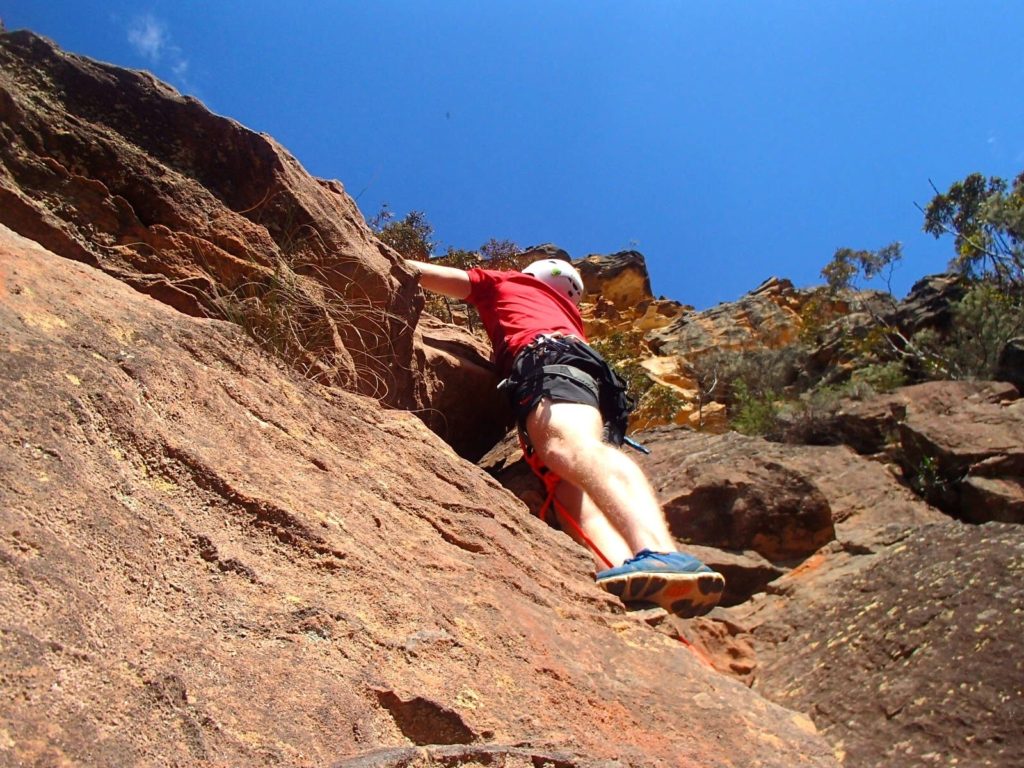 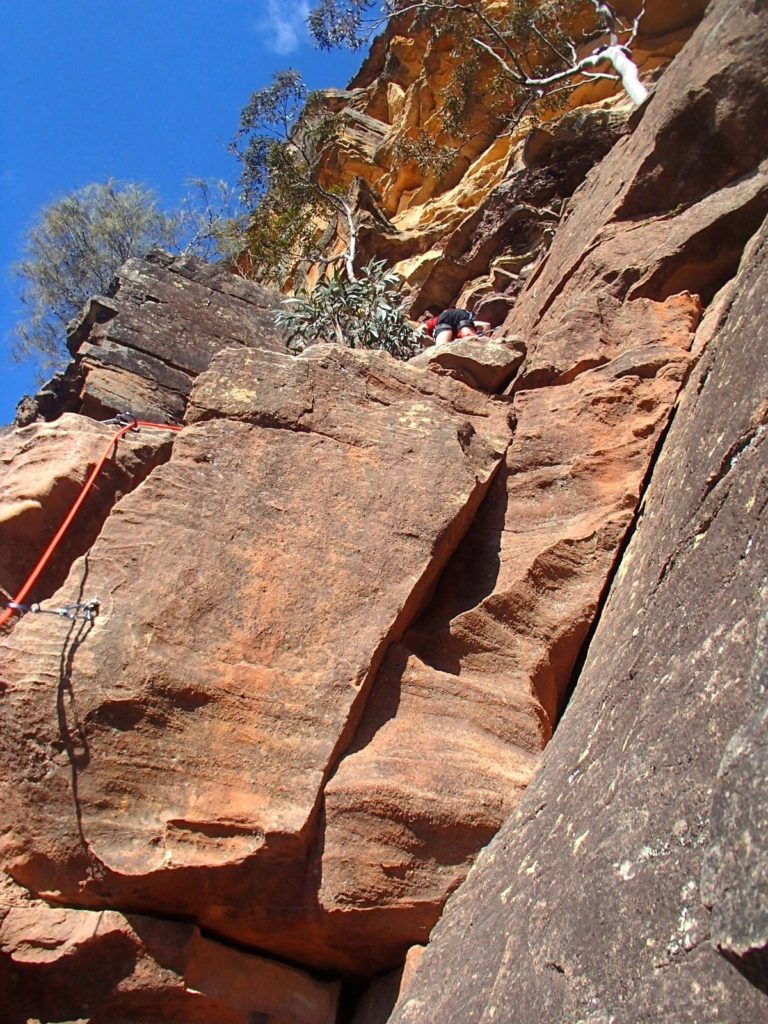 Drawing on previous experience, we got Jon to tie in on the ledge half way up the climb and brought all the packs up in two stages, which avoided them getting caught on things. 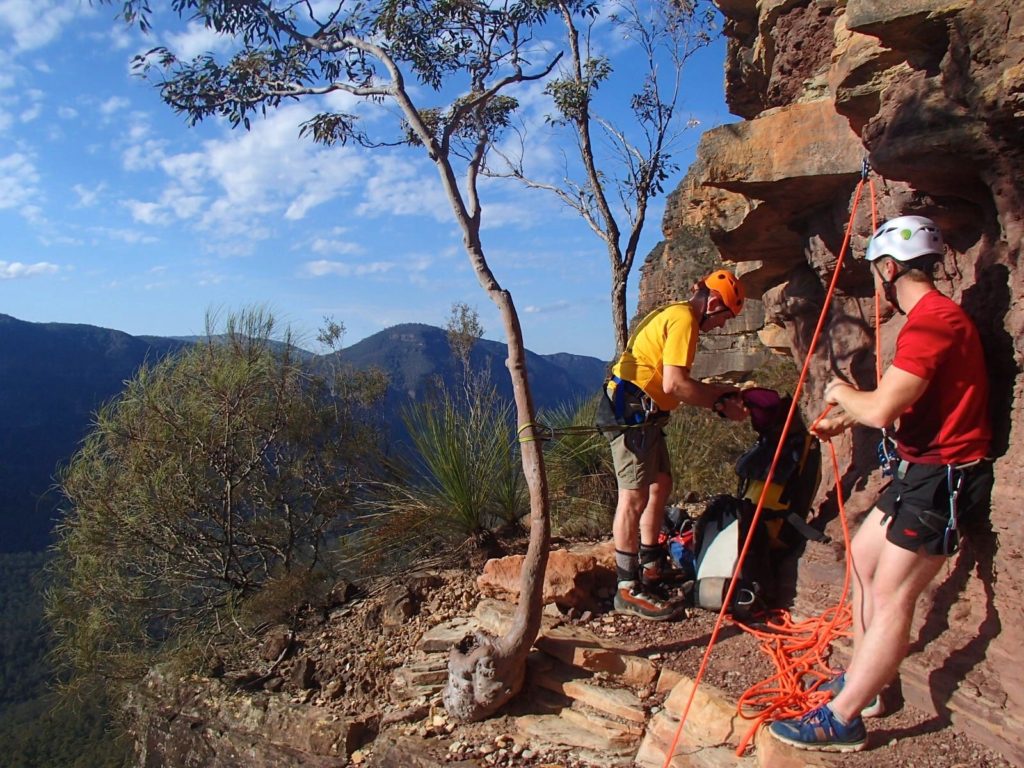 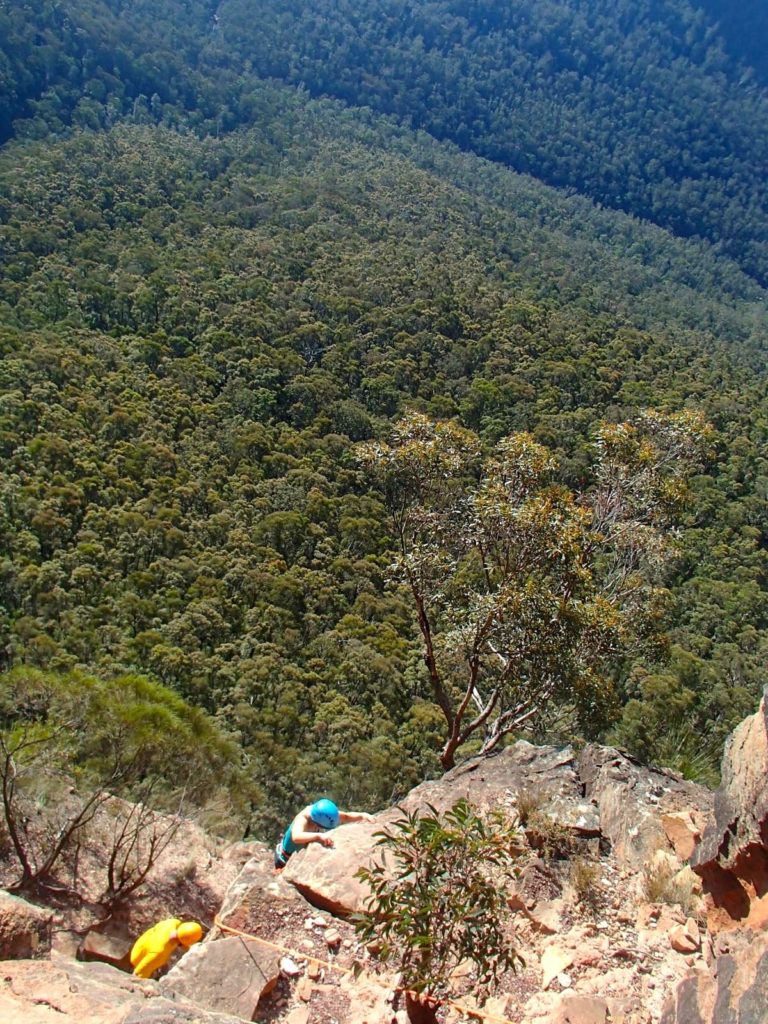 When Elena and Marty had come up we headed to the final, very steep gully to the lookout for the traditional photo of triumph, and then walked the half hour back to the car. All up the trip took 6hrs 45m, and it was a magnificent day for the first canyon of spring. 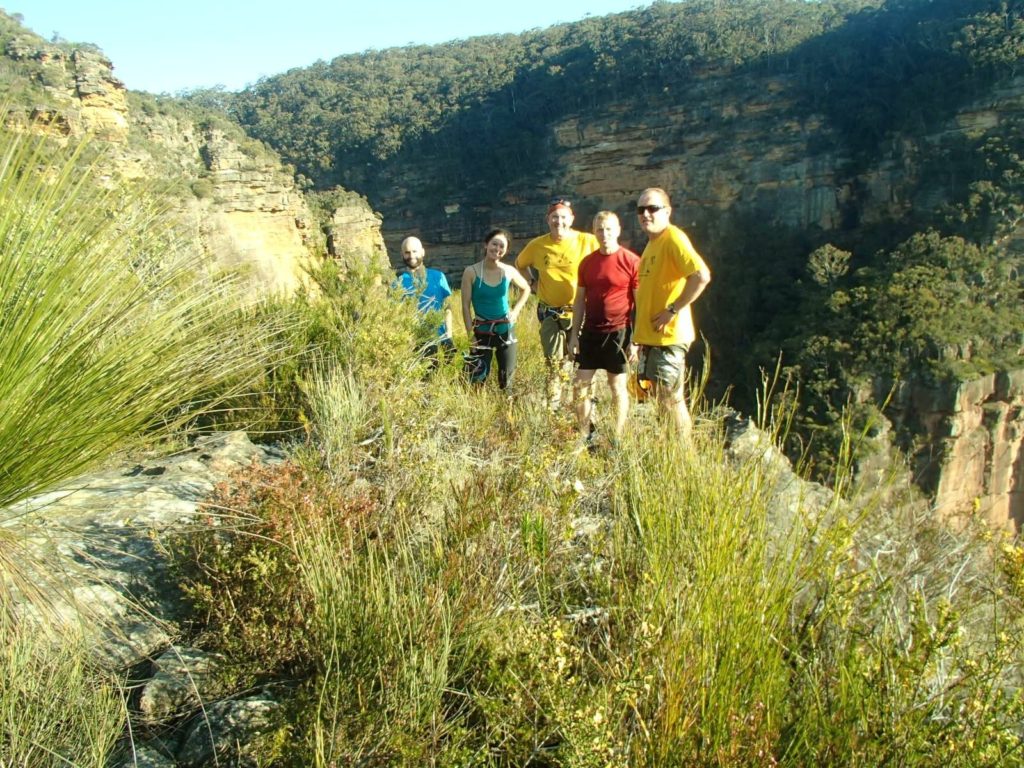