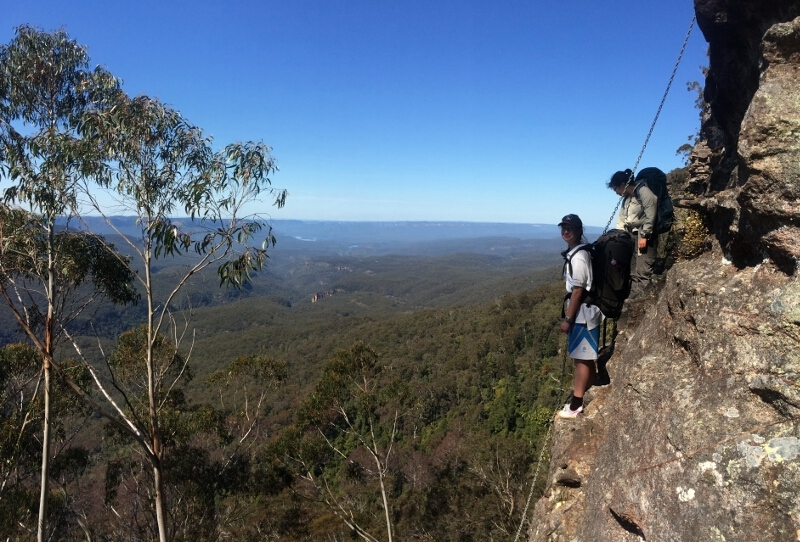 I had never really done much walking on Narrow Neck. For sure I’d been down the Golden Stairs on long forgotten trips, but I’d never really even walked the full length (that I can recall) – unless you included the painful slog at the end of a K2K-in-a-day trip, during which darkness consumed us as we climbed up Tarros Ladders…
And so, it was time to explore the length of the mesa, hopefully glimpsing the history associated with some of the passes that breach the the steep sandstone cliffs.

The original plan had been to camp out on Narrow Neck, meeting Nuria there for an early start in the morning… Plans changed (as they do) and we ended up going dinner shopping, cooking spaghetti on an fancy gas stove in a kitchen and then sleeping in Owens homely home.

The homely house trio rose early, and after breakfasting on toasted banana bread had a communal teeth brushing session in the shape of a equilateral triangle.

Despite being early, Nuria was already parked on Narrow Neck when we arrived. We soon hoisted packs and where off along the fire-trail that (in 1961) had been bulldozed along the plateau.

It wasn’t far along that we had a quick look for a walking track that some hasty research before the trip (Alan Well’s website and a couple of T2’s trip reports) led me to believe existed… After some brief fruitless searching we stashed most of our gear and, consulting the topo map, took a compass bearing and plunged into the scrub. 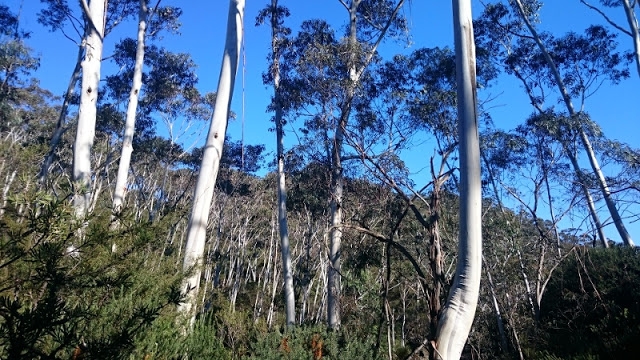 (The pass we where aiming for was used by miners in the 1860’s (and likely by aboriginals before that). Its current name comes from the predominant red shale that is traversed to pass through the cliff-line.)

The scrub became thicker as we homed in on the location where Corral Creek falls through the cliffs. We bent-over-crawl-walked through a mystical twilight world beneath the thick canopy of some banksia(?), and, dropping further down I managed to cut three of my fingers on some sneaky razor grass.
Progress halted when we reached the creek – we where stuck above a small waterfall (Lizards Leap??) with no safe way down. We soon scrambled out and in the next negotiable pass to the creek found the clear trail we must have been paralleling for some time.
Passing some small overhangs we crossed the creek and headed out along the shale ledge enjoying the Megalong views.

Once through the cliffs we continued south to try and locate a second pass back up through the cliffs. We soon discovered a spur, and finding a finding an elevated platform with superb views decided to have a short break complete with various gymnastic poses and upside-down vistas. 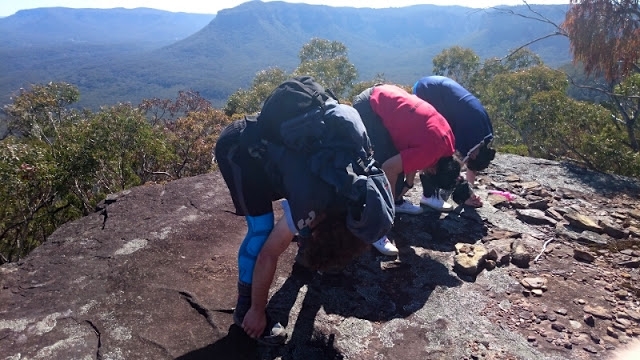 We continued climbing up soon coming to rock-face with plenty of helpful protrusions for holding and treading on. With some free climbing and pack passing, we soon had everyone safely up.
After a few more minutes of appreciating the view we traversed around and up through a small valley to the top of the plateau. We never did see the rock cairn that the pass may have been named after (though it appears there may be some variations to get up here). 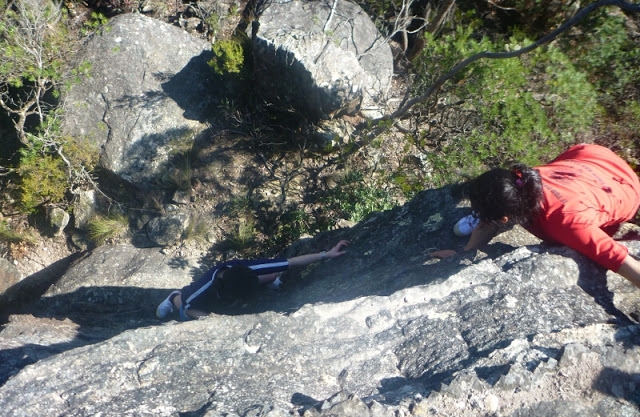 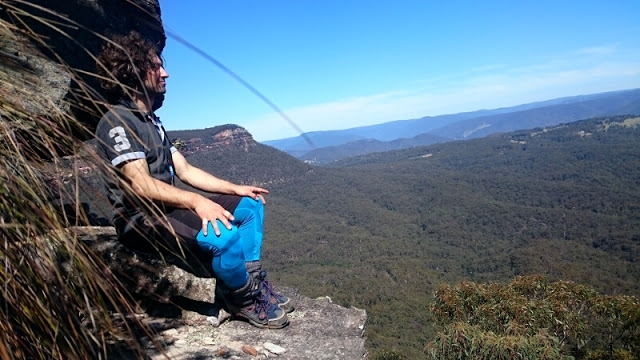 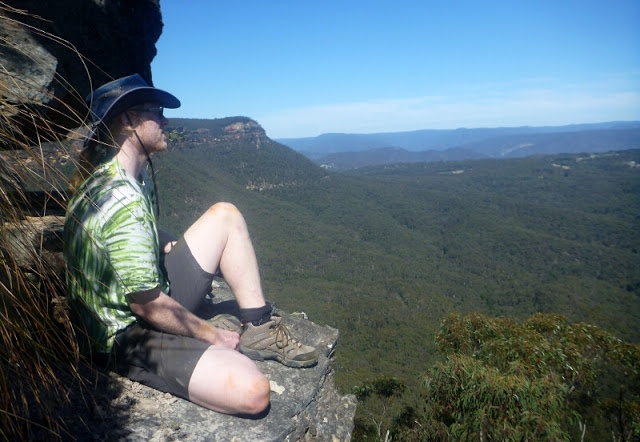 We managed to pick up what might be a rock climbers track, and after retrieving out packs proceeded to a great lunch rock on the second neck.
There where some fantastic views into both valleys! To top it of we had ‘Ants on a Log’; something I haven’t had for ages! 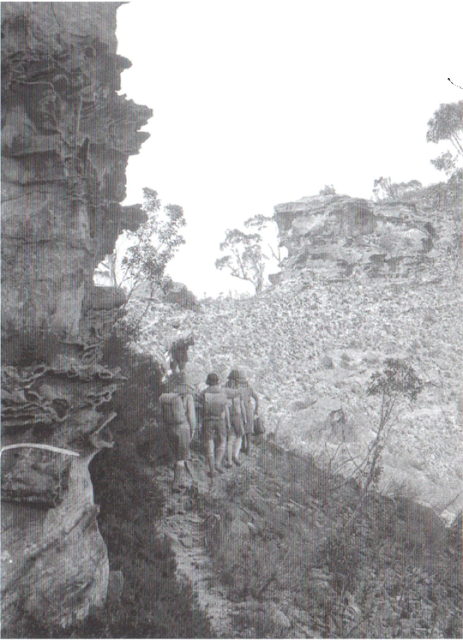 You can see our lunch rock in this photo from the Fred Rice Collection. In October 1929, when the photo was taken, there was no firetrail. 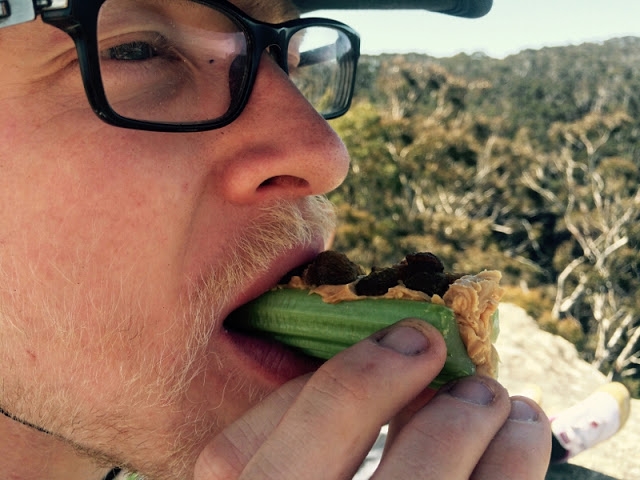 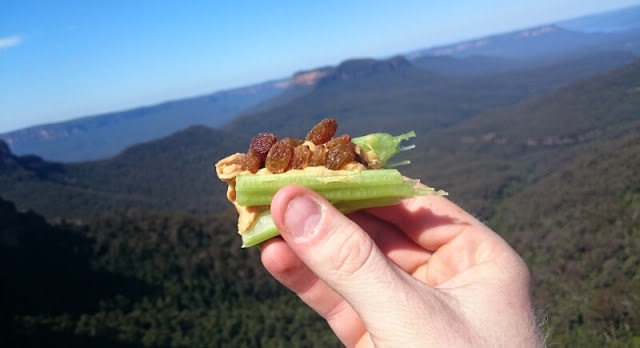 It was then another short road bash with some detours into unavoidable interesting holes. 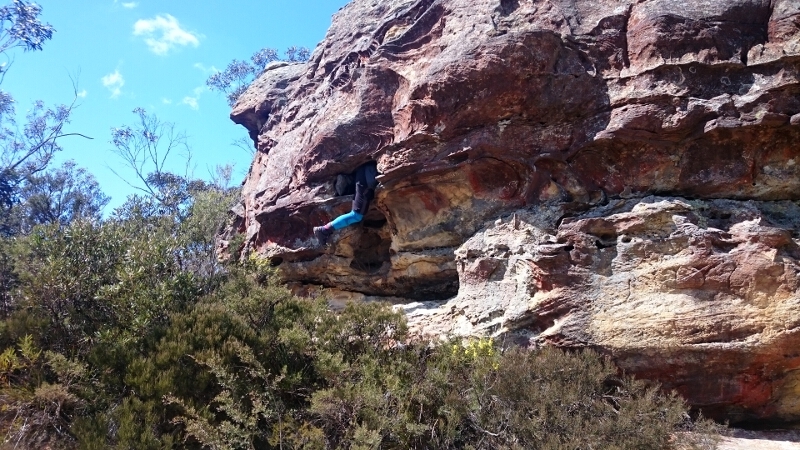 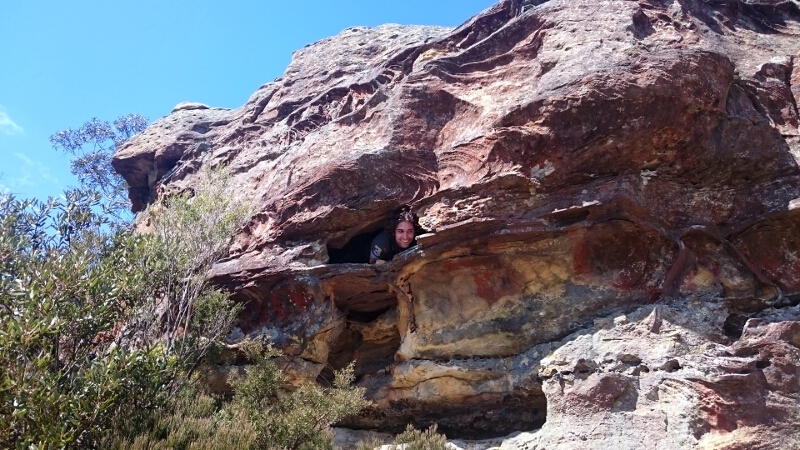 After exploring a track that seemed to lead nowhere, we again dumped gear and followed some creeks down into a cool valley where we spent some time collecting and drinking water.
Downstream it was a bit scrubby and Yumi did a great job of locating (saving others from) a number of pit traps!

We soon reached a waterfall which looked tricky to get down… luckily there is a coachwood tree complete with a ladder of bolts. I had read that it was a little hard to find from the top, but my limited plant knowledge was to pay off! After climbing a rock and scanning the bluff there was only one obvious spot with a big coachwood; after investigating, sure enough! there it was! 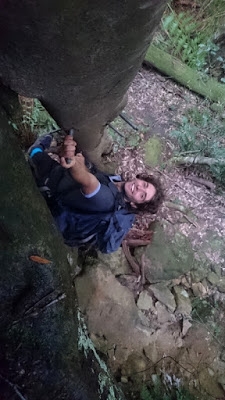 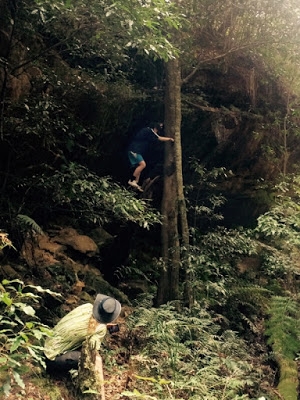 We followed the creek down crossing now and then to bypass a number of small falls.

After exiting the creek we contoured along the talus slope. There where some incredible ferns and some sweet smelling flowers we named ‘perfume bell flowers’ (these where contrasted by some defensive lawyer vines that got a few people I think).

It seemed like there was some kind of road running along the slope, but in the end I think we decided it was just a natural feature… however, some reading a couple of weeks after the trip uncovered a map with a kerosene shale seem marked right where we had walked, so maybe it was an old mining route? 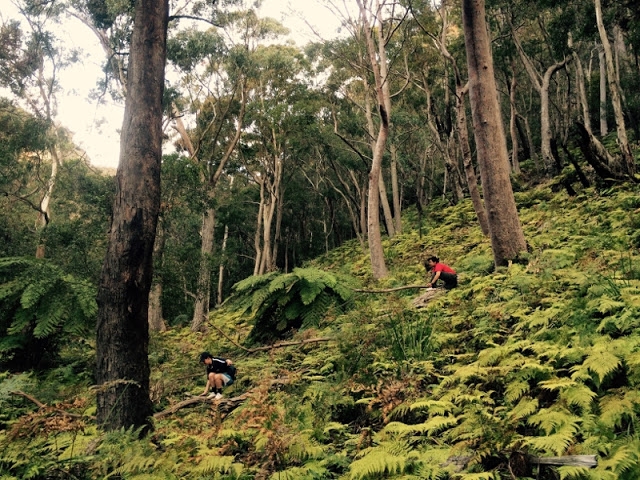 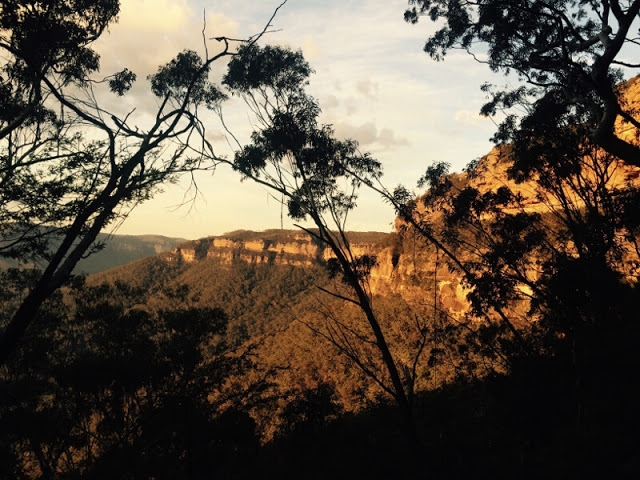 The next pass, named after a local aboriginal, proved a little harder to find… we had someone free climb up one possible pass, but everything was quite chossy, and a rope was soon thrown up in order to get safely down… We lost quite a bit of time here, but soon found an obvious way up. After an easy (but exposed) free climb we where at the top! Light was fading so we would have a short walk in the dark to the road… how wrong we where! 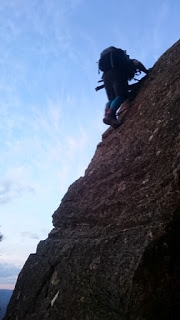 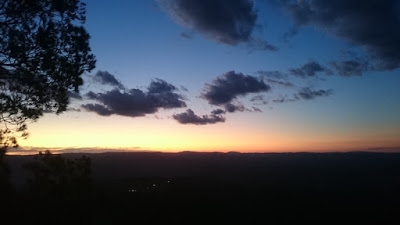 More time was lost as the light failed and I couldn’t work out exactly where on the plateau we where. We zig zagged for a bit until through trial and error we figured that there was simply no easy walking!
Feeling like fools in a fool’s paradise, we prepared for a much longer bush bash than anticipated… the scrub was so thick, that in places the only way forward was to crawl. I distinctly remember one occasion where, on all fours, I pulled out my compass, consulting it on which way to lead our crawling convoy! Amusing now, but not really at the time 🙂
Something like 3hrs for 2km… I think our memories have filed recollections similar to the following images:

Everyone was relieved when we reached the road. Owen was quite sick by this point… maybe the creek water?

We had several k’s back to our packs, and abandoning grand plans of exploring for a good camp, decided that we would seek refuge on Bushwalkers Hill. There was talk of camping inside the firetower, but this was heavily secured against tired bushwalkers. Close to collapsing with exhaustion nearly everyone forsook dinner for sleep.

Despite the epic Saturday, the walk had become a bit of a challenge for some, and at sunrise, some of the group rose, and in the cool morning headed through the damp bush before locating the track to the series of chains dropping into the Megalong.

Setting a quick pace, we dropped down occasionally pausing to admire the views. 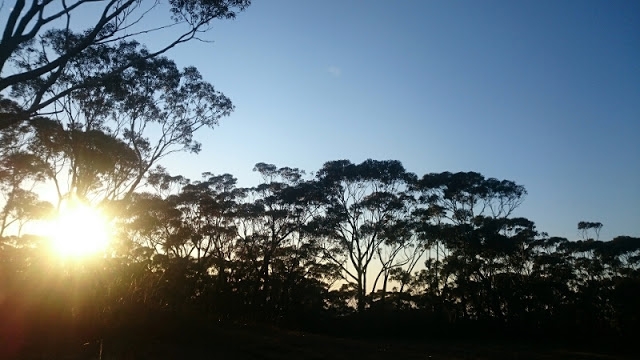 From Medlow gap the tracked route went via Mt Derbert and up through Duncans Pass. On Duncans pass The Walaby track was explored (twice) as well as descending Tarros Ladders (which, thanks to a fire long ago, isn’t quite the ladder it once was) 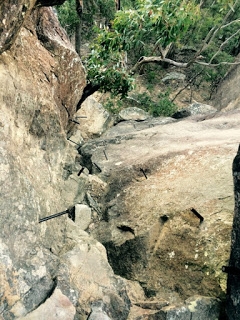 Once back at camp, there was time for a quick snack on a dying cooking fire, but time was ticking so we where soon off again (Owen was still unwell and decided to forego the second day).

The remaining three headed along an old firetrail and followed a faint pad out towards Cedar Head. A large cairn (there where lots of these) alerted us to the way down. (This pass was relocated by Wilf Hilder and a chain has been installed by his bequest.) Deciding to challenge ourselves some managed to get down without the chain as an aid! 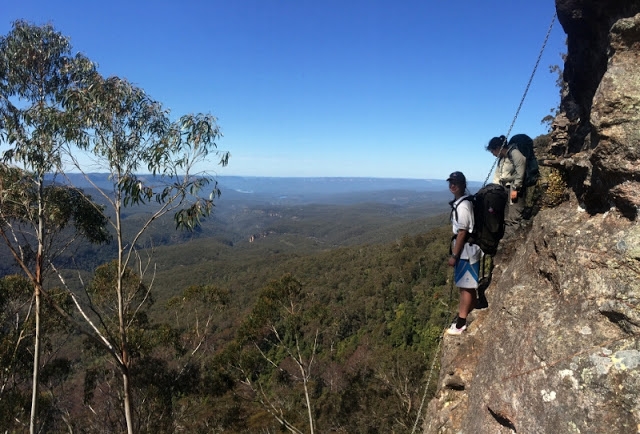 A break part way down with some exciting gorges for a backdrop. 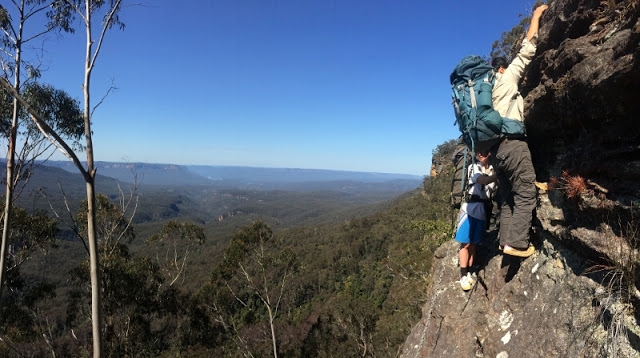 Our way down was accompanied by fantastic views including a vanishing waterfall. Definitely one of my favorite spots of the trip.

Our rope was used in a couple of places – mainly because we didn’t have time to search for a better way down. It was fairly slow going as the footing was steep and precarious. Eventually it leveled, but we where still caught by some smaller uninterrupted bluffs further down. A hidden animal track finally got us down to some fabulous spots perfect for camping – if only we had another day!

Passing through an impressive grove of giant melaleuca we continued down to the main creek passing many orchids (pink lady fingers amongst others), and eventually climbing down a tree to get down the last little bit.

Drinking from the tasty water and snacking on some sweet Lilly Pillies we crossed the creek (carefully as I got my foot wet on my last creek crossing the weekend before!).

We passed a doughnut tree near the top and where soon on a walking track which coincided with the demise of the endless up.

It was then time for feasting at the top of the Ruined Castle. Delicious cheese. Then, with the sun low on the horizon though we coaxed ourselves to our feet for the walk back to the car. 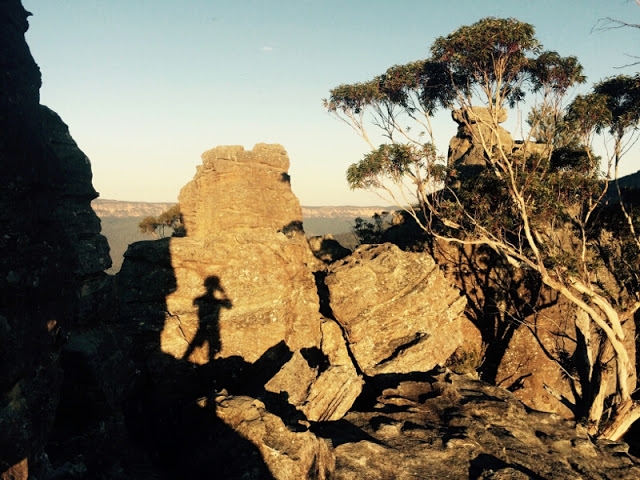 It became dark as we neared the Golden Stairs, our ninth pass for the weekend. If I had know that the stairs where named after a Salvation Army hymn I would have had it ready to sing on the ascent, but I wasn’t yet aware of the fact so Nuria and Yumi where spared my singing.

The car was a relief for sore eyes/feet and it didn’t take long before we were zooming along the highway bound for Sydney.

Thanks to all for a great (tiring) weekend 🙂
I definitely feel I know the renowned neck a little better now.