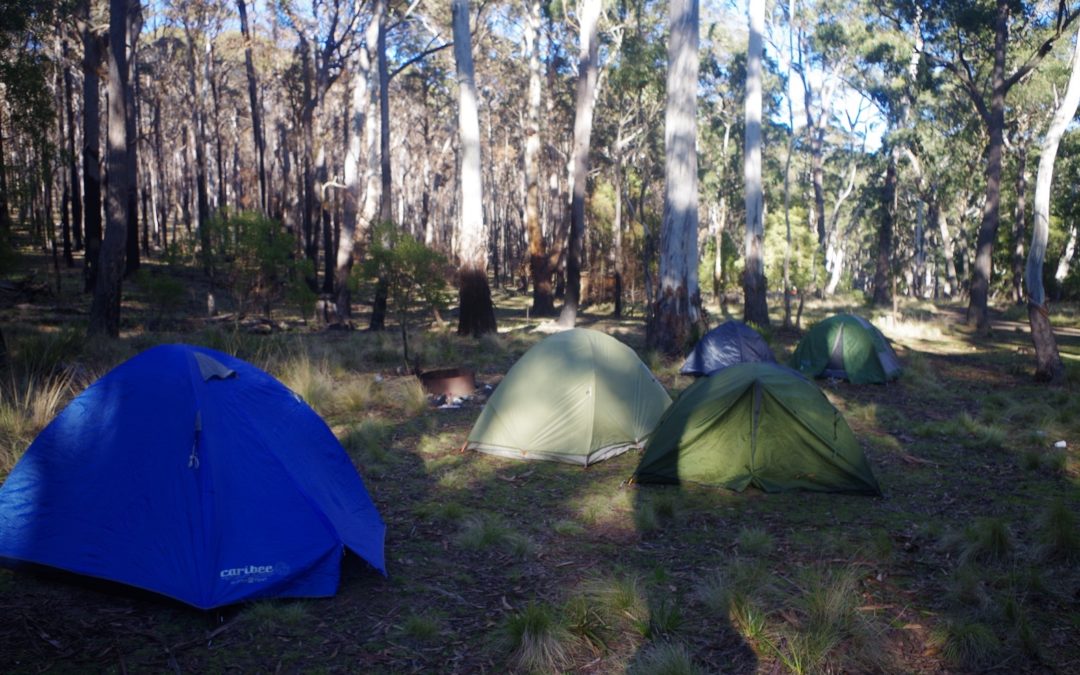 I think that the photos of this trip – already released – may have you intrigued you about this trip. Was the Echidna alive? (yes). Why camp so close to the rail line? (someone scared of snakes in the spot further down the road).

There were two groups heading out on friday night; one was Tony and two passengers, Anqi and Sophie, and the other was the remaining 7, in Haokai’s and Jackson’s cars. Tony’s group wanted to leave early at 3pm to avoid traffic. The rest of us were meeting up at Woy Woy Station and then Maccas about 8.30pm. Therefore I needed to pick a campsite which Tony could easily find, which didn’t require too much driving at night, and the risk of hitting animals. I considered the campsite at White Box in Goulburn River NP, but its entrance from Ringwood Road is ill defined, in fact there are several bush tracks there leading off into nowhere, so I chose a known campsite at Cox’s Gap, which is actually in Wollemi NP. It is easy to find, being on the only bush track off the Bylong Valley Road for many km, and close to an obvious landmark, a rail bridge. It is a grassy area over 200m from the railway and also far enough from the road to minimise noise from both sources.

Tony’s group left at 3pm but hit the heavy p.m. peak traffic on the North Shore and M1 Motorway. By 5pm he had only just passed the Gosford turnoff. But by 7.45pm Sophie texted that they had passed through Denman so I knew he was on the right track.

Meanwhile the rest of us had met up at Woy Woy Maccas and set off from there about 9pm. It was good driving on motorway until just before Singleton, and then a good run on the New England Highway to Muswellbrook. It was here that we saw our only Kangaroo by the road (alive). So on we went to reach Sandy Hollow and then along the Bylong Valley Road. Near Kerrabee we narrowly missed a Wombat crossing the road.

So we went up the hairpin bends of Cox’s Gap and then descended down the other side, and looked out for the bush track leading to the camp site. On reaching the grassy area about 150m along the track we were concerned to discover – no Tony! Consternation! Had he missed the bush track and camped further down the main road? I considered checking the road, but then decided to drive to the end of the bush track another 250m. And at the end of the track, there he was! we were relieved to find him, but pointed out how close we were to the rail line – 30 metres away and almost on the same level! Tony said that he didn’t think that the grassy spot was the right spot as I had told him it was 200m along the road, and he measured it as being 100m (actually its 150m). Also, Sophie was concerned that there could be unwelcome creatures in the grass.

Still, from past experience I had only observed one train along this line at night, and as one had just passed through, I thought that that would be the last one until morning. How wrong I was!

Still, Tony had a fire going, so we took advantage of it as the night was rather cold (there was sections of fog along the road), and then we set up our tents. It was 1am, yet the brightness of the stars above kept people up marvelling at them. Much of the Milky Way could be seen, as well as the Greater and Lesser Magellanic Clouds. Orion (a summer constellation) was rising in the east. So then to bed. Meanwhile the train traffic continued at the rate of one per hour. Train traffic had greatly increased due to the new coal mines at Wilpinjong in the Bylong-Ulan area.

Next morning we struck camp after breakfast,and also were able to see the campsite in the daylight. It was a rather degraded area, with the fire place being old concrete foundations from the construction of the nearby tunnels. There was also a wrecked utility vehicles right at the end, with old bits of metal lying around. I told Tony about the nearby tunnel (he was unaware it was there), and he asked if it had Glowworms. I said no, it had very large trains. And this is all within that well known Wilderness area, Wollemi National Park!

After striking camp we set off through the picturesque Bylong Valley, which is threatened by coal mine expansion, and passed by the large open cut mine at Wilpinjong. In a paddock on the opposite side of the road I spotted at flock of Emus, and we stopped for photos. Odd that such a shy bird should be found so close to the rail line and a large coal mine!

Soon we reached Ulan and set off along the Ulan-Cassilis Road. Halfway along I spotted a dark shape crossing the road, and as we got closer saw it was an Echidna. Immediately it saw us it curled up in the middle of the road. It wasn’t going to last long if it stayed there so I coaxed it (very carefully!) to the roadside verge, and there was another photostop. Then Tony picked it up 9very carefully) and took it into the bush where it safely continued its journey. Everyone marvelled at this animal, even more so when I told them that it laid eggs. Michelle didn’t even know it existed.

We eventually reached Coolah for petrol, then off to the Coolah Tops NP. The road rose via several sharp bends until flattening out in farmland, which at the Park gate abruptly became a dense forest of Snow Gums. We then continued to the Cox’s Creek campground for lunch. We noticed that there was just one tent set up there by someone else. After lunch we then went to Pinnacles Lookout for the amazing view over the Liverpool Plains, stretching as far as the Warrumbungles Park. Then it was off on a return walk along a track which passed through the Snow Gum forest which borders the escarpment, although the trees obscured the views. At one point we came to a small creek which had a peculiar milky tinge to it. This is also seen in the streams in the Warrumbungles NP and is believed to be some sort of extract from the plants which grow in the streams of these two volcanic areas.

After our walk we went again to the Pinnacles Lookout, and the view was clearer, less hazy, in the late afternoon. WE considered that this open area would be a perfect place for star-gazing after dinner. Then it was back to the Cox’s Creek campsite where a fire was made up in the circular iron ring provided by the Park (an environmentally-friendly version of the ring of stones!). Tony cooked up a vegetable soup for everyone, and later cooked up lots of bananas. Meanwhile, the owners of the lone tent there had turned up, and asked us to camp further away from them. We were quite happy to camp away from people who brought along canvas chairs for seats!

Then it was back to Pinnacles Lookout for star-gazing; everyone marvelled at the sight of the Milky Way, which some of the group have never seen before. Indeed one person at first thought it was a cloud. Michelle said that even in the most remote areas of England the starts can’t be seen as brilliant and numerous as here. The Constellation of Scorpio could be clearly seen directly overhead. Just demonstrates the effect of light pollution especially in the Northern Hemisphere. Then back to the campsite where we sang nursery rhymes in our own languages.

Everyone slept well that night after the short sleeps of the previous night at Cox’s Gap. It was also not too cold a night, surprisingly as we were at 1100m altitude.

Next morning a Wallaby and her Joey were seen close to the campsite (see photos), with the Joey grazing while still in her pouch. We made a small fire for breakfast (the fire of the previous night had died) and Tony cooked up more bananas.

After striking camp we drove to the start of the Norfolk Falls track, which goes to that Falls and then on to Bald Creek falls. Norfolk Falls would be spectacular after heavy rain as it is quite a drop over volcanic hexagonal columns. Then it was back to the Norfolk Falls Picnic area for lunch, and then the long drive back home. On leaving the Park I stopped to point out the views of the Northern Blue Mountains (The Kerries, Kekeelbon, Mt Coricudgy etc) in the distance. We went via the Golden Highway via Merriwa and stopped at the Denman Hotel to give everyone a coffee and sweets break. At the Hotel a Country Rock singer was giving a live concert. Then it was off to home, with Haokai dropping me off at home, while the others drove directly home (hope the M1 traffic wasn’t too bad).

It was a very enjoyable weekend with lots of new sights, strange animals, and new star sight for everyone. Not a single “no show” by the way.