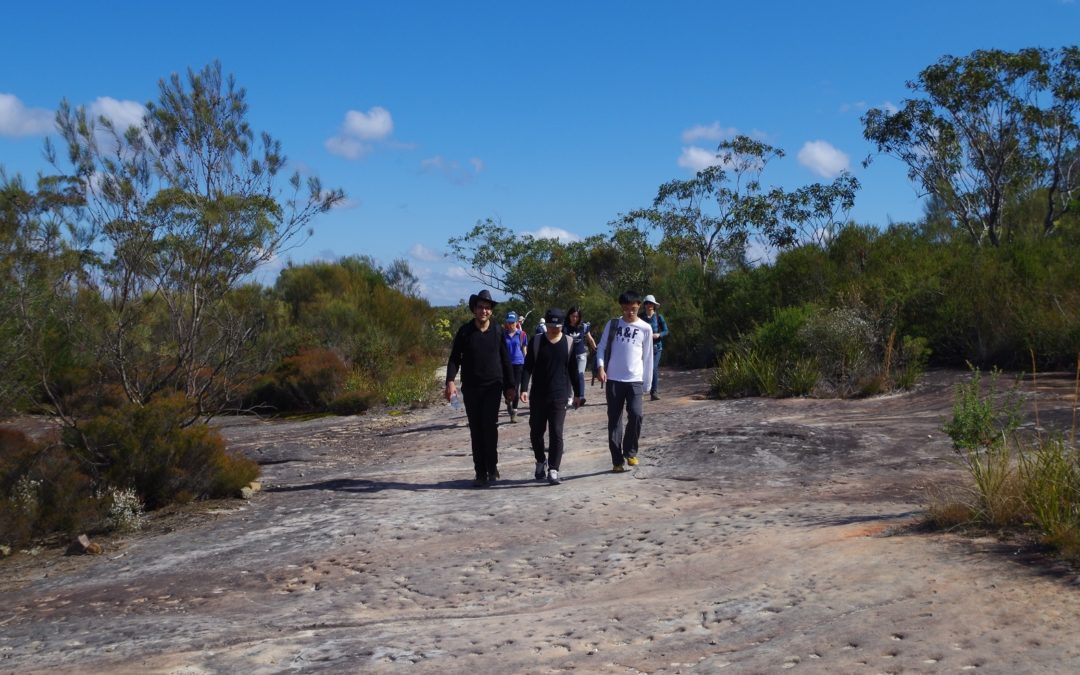 We all met up on the tiny platform at Wondabyne Station, and another walker headed for Patonga kindly took a group photo before we left. Then it was the hard but fairly short slog up the hill next to the station, and then on to the fire trail which heads in the direction of Girrakool. The track up the hill has suffered from damage from the big storms in April and some steps are entirely missing. It was though fine weather but cool which made for good walking.

On the way we spotted the turnoff of the Pindar Cave track, which someone had marked with a huge arrow of stones, just in case you miss it! Eventually we reached the junction of the track leading to Myron Brook and Kariong falls. This track runs reasonably level for a while until dropping down fairly steeply to Myron Brook. Like the walk up the hill from the station, it too has been damaged by the heavy rains from the April storms. We didn’t stop at Myron Brook as it is one p-lace on this walk where it is possible to get leeches, so continued on quickly to Kariong Falls. This section is perpetually damp even in the current dry spell and has muddy and slippery sections.

At Kariong Falls we halted for a break and admired the Falls which were not at their best though due to the dry spell. After Kariong Falls we continued up the second major climb of the walk until eventually reaching the railway access road and fire trail that starts at Staples Lookout on Woy Woy Road. We walked along this for some distance until reaching a cross-country track known as “Thommo’s Loop” At one point we could see Mt Wondabyne in the distance, and some walkers couldn’t believe we were going to climb it. They didn’t believe me when I said it was only 45 minutes away and not that difficult. “Ït’s going to take 2 hours”, someone said (In fact I was wrong – it didn’t take 45 minutes, it took 40 minutes).

We also saw Aboriginal tool sharpening grooves in the large rock platform (see photos). Like the area around Myron Brook it seems to always have water running across the rock platform. Such large rock platforms are by the way a feature of the area. Eventually Thommo’s Loop joined up with Tunnel Road and then it was a short walk to the Junction of the track up to Mt Wondabyne. This is a rather stoney track which rises on a moderate grade for quite a while. Halfway along I made an entry in the track log book (it is a section of the Great North Walk – GNW).

On reaching the foot of Mt Wondabyne we then took the track to the summit which is rather tricky in places. Once at the trig marker we settled in for lunch. Some of the group posed at the trip point, which also had a string of Buddhist prayer flags attached to it by an earlier group apparently. Meanwhile, a group of older walkers in their 60’s and 70’s were following about 100m behind us and found the tricky climb to the summit no obstacle (their leader did say though that they had started from Staples Lookout, avoiding the steep climb from Kariong Brook). Wildflowers were in abundance along the walk and at the summit, including the pink and red Boronia (see photos). They were being visited not only by the ubiquitous Honey bee but also several native bees including one big black one.

After lunch we descended Mt Wondabyne, with a couple of ladies from the other group finding a slightly easier way down, and discovering a cave which could be used for camping. Then we retraced our steps back to Wondabyne Station. At the track junction with the Girrakool track, we paused and someone noted that according to his GPS we had already done 20km (and we were still 2.5km from Wondabyne Station). GPS readings can be inaccurate though and overstate distances. In fact this walk is 16km return.

Then it was back down to the station and then I noticed that the north-bound train hadn’t yet arrived – apparently running late. This suddenly provided then opportunity of catching it to Woy Woy and hopefully meeting up with an express from Newcastle which would get people home earlier. Also, it would eliminate the 30 minute wait on the Wondabyne for the Sydney train. The temperature would quickly drop as the sun had gone behind the hill; not good for people sweaty from the steep climb up from Kariong Brook. I didn’t have time to explain all this though as the Woy Woy train was now pulling into the little platform, so I hurried people on board, with some puzzled as to why we were getting a north-bound train. At Woy Woy I left the group on the platform to catch the Sydney train, and a very hurried farewell as the train guard wanted to get my already late train on it’s way.
Although it was a fine day, the radar showed a thin but heavy rain band heading straight for Wondabyne and Woy Woy. I thought it must have been an artifact (sometimes get false alarms on the radar) but indeed a short but heavy rain shower did hit Woy Woy and Wondabyne after 5pm. We were gone by then though.