Get out to the ‘Gambe 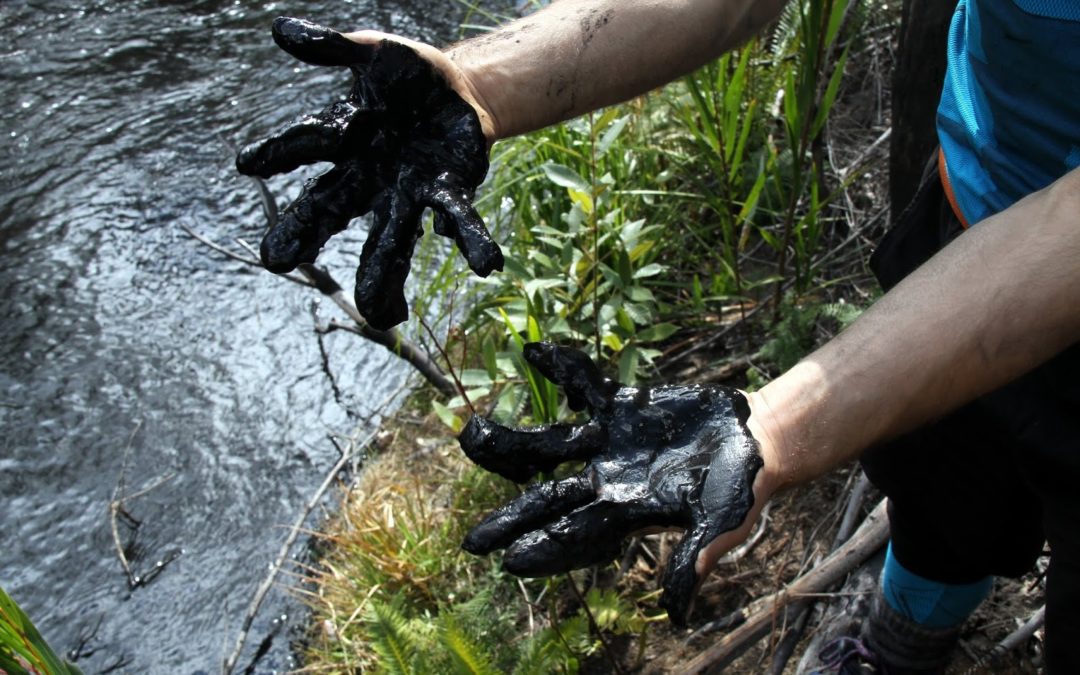 There is lots of information online about Centennial Coal’s Clarence Colliery spilling tonnes of coal fines spill into the World Heritage listed Wollangambe River (for example see here: http://www.colongwilderness.org.au/news/2015/wild-wollangambe-river-trouble).  Alex has also created a Facebook group with all the most recent developments. You can find this group here: https://www.facebook.com/groups/1418903758440107/ join if you can!

Keith from the Colong Foundation organised a trip last a couple of weeks ago. I went out to have a first hand look; and felt that the photos I had seen didn’t show the true extent of the damage. David has put a little write up of the trip here: http://www.david-noble.net/blog/?p=8584. I think it is important that people have a look with their own eyes to become aware of the dire straits the river is in. It is sad that it has taken something more visually stunting to draw people’s attention to the Wollangambe: The colliery has been polluting the river for many years and aquatic life is is in trouble. “The mine’s wastewater is associated with a 90% drop in macroinvertebrates in the river, which has the potential to affect larger animals in the food chain” (including the endangered Macquarie Perch). 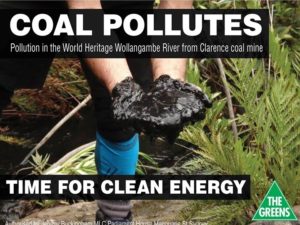 After a bit of a late night celebrating my sisters birthday, I reluctantly got out of bed and after a tasty breakfast headed up to wait for the others at Bell Station. It turns out Phil and Catrina had a much later night than I, and Yumi and Ruby where hard pressed keeping them awake on the drive through the mountains.

I was a little worried when the train Alice and Amir where supposed to be on didn’t stop at the station… by the time the others arrived in the car, I had worked out that they hadn’t told the guard to stop (you need to do this for Bell and Zig Zag stations). Phil got out a picnic blanket and we all lazed around in the sun waiting for the next train from Lithgow. Combined with the replacement buses and extra hour and a quarter, Alice and Amir had quite a long journey!

We where finally under-way, and, after a short road bash, we headed off track. Skirting around some private property we headed along a ridge which offered some fantastic views. You could see Centre of the Universe on the horizon (some of us would be walking out this way later in the day).
There wasn’t much wattle around as it more of a colonising plant, and the top part of the plant dies during a fire. The lack of undergrowth helped me spot the malaé(??) style trees (multi trunk).

We dropped down the ridge and after a bite to eat headed a short distance upstream to a junction with a side stream whose clean waters offered a stark contrast to the black Wollangambe. Catrina, who has been involved in a bit of campaigning, came up with the idea that people could take photos of their black hands and post these on a site as a kind of signature. People could even just paint their hands black to show their support. We took a number of photos to showcase the pollution. 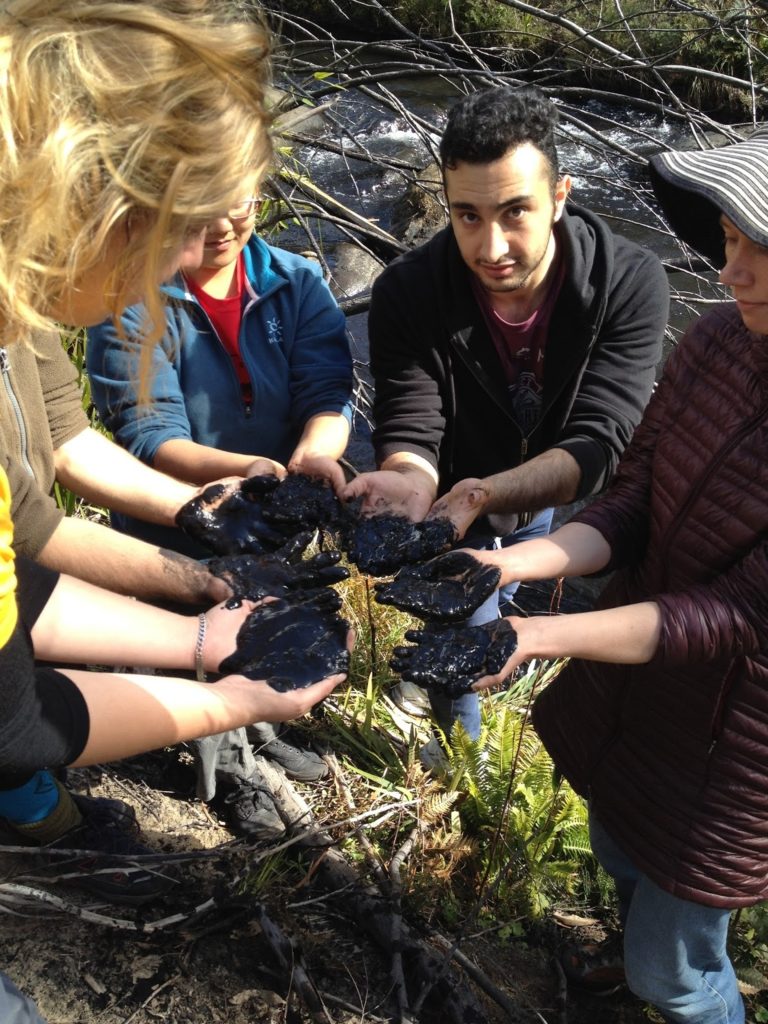 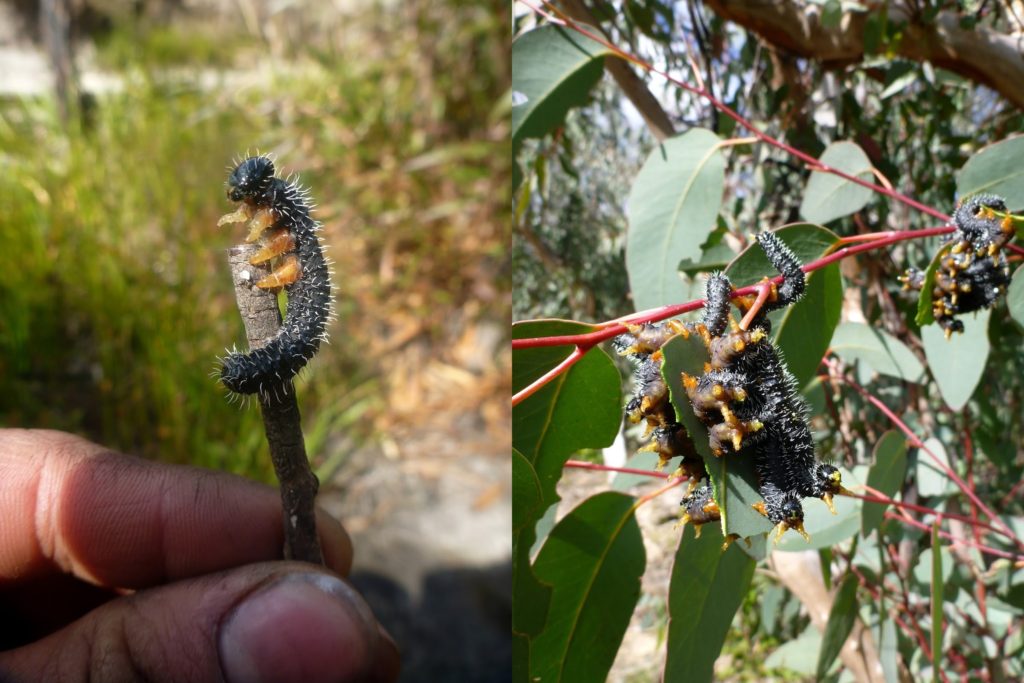 Ruby picked up friend on the walk back to our packs – perhaps a sawfly larvae (?).

From here, we did a bit of off track walking to the overhang where the majority of us would be spending the night. On the way Ruby pointed out the Blood Root (aboriginals used this to make a red dye). 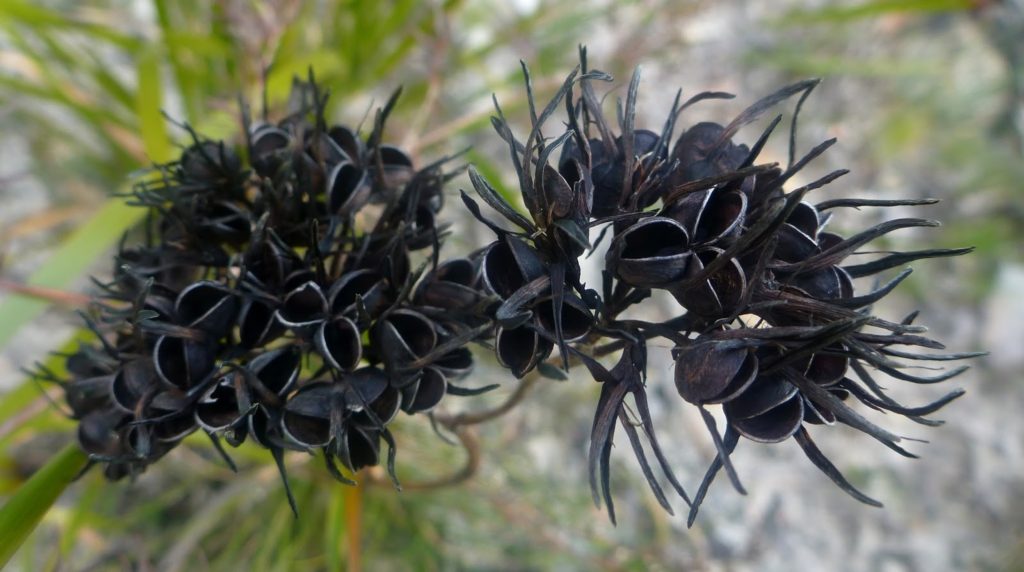 Alice and Amir needed to catch a train back, so after lunch, Yumi and I joined them for the walk out.
Passing a beautiful swamp, we bush-bashed to a crossing I had used on a past trip. This is near a great section of canyon that I had on my bucket list for this summer. The black waters no longer made it so appealing. 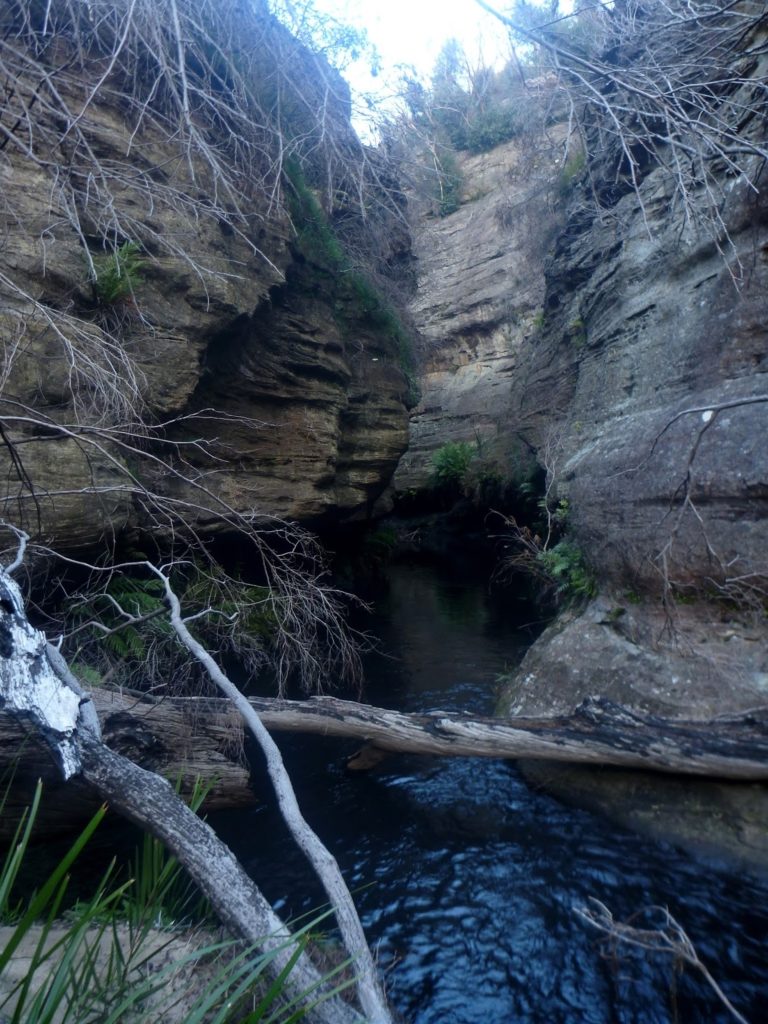 Putting our shoes back on, we scrambled up the other side and soon located the track that would take us back to the car and train station.
It was getting dark when we came across another group setting up their tents next to a small creek. Glad to be on a walking track, we donned headlamps and trudged up the hill. I felt a little bad that we where finishing so late and hoped I hadn’t scared anyone away. I think it was Alice’s first trip – she did really well! I think we where all happy to reach the station.

Yumi and I wanted to top up our water bottles… we managed to find a hole at the top of a water tank. It turns out the water may not have been the best as Yumi and I both had upset stomachs the next day 🙁

We left the others at the station and drove around to the other side of where we where camping (for a shorter walk in). Some cooees, helped locate the others, and we soon joined them around the fire for dinner and then cheese and crackers (yay!).

It was cloudier than expected which boded well for keeping the temperature up… But it did mean that my star gazing was less successful than I had hoped. I wanted to try my luck at catching the tail of the Perseids and Leonids.
The only patch of clear sky was above the colliery which had so many lights I soon retuned deterred to camp.

We woke perhaps a little later than we should have; by the time we where piling into my car we where already supposed to be at the station 😛
We zoomed around to the station where we found Katy waiting. The others decided to head home for work, relaxing and whatever else.

Katy and I waited some time for another person, but soon decided they where a “no-show” – I got a message from them a couple of days later asking who had tried to ring them – slightly amusing 😉

We headed off along the same ridge as the day before, but had quite a different route planned.

After visiting the same inspection site we continued downstream using the many natural bridges to cross from one side to the other. 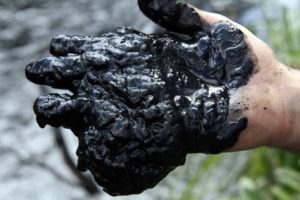 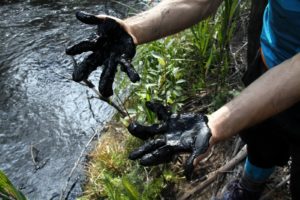 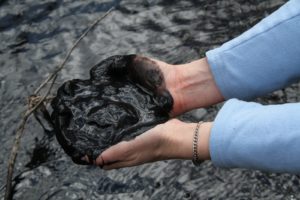 Katy’s knowledge of bush flora and fauna is much better than mine enabling me to learn a few new plants. I’m finding that extending your knowledge of the bush opens up a whole new facet of enjoyment whilst on bushwalks. At lunch we where joined by a grey shrike thrush which had an impressive repertoire and apparently dabbles in a bit of song mimicry (like the more well known lyre bird).

Continuing along the side of Wollangambe we found a number of sundews (or Drosera) which is an interesting carnivorous plant that likes to grow in wet areas (Ruby reminded me of these on the Saturday – but I didn’t see any then). We also came across quite a number of sawfly larvae(?) which seemed to love the fresh gum leaves by the river. 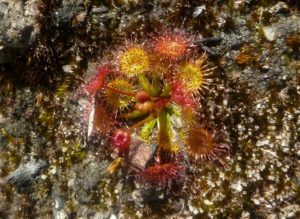 We crossed over a side creek teeming with small fish – in antithesis to the lifeless waters of the Wollangambe. Upon the ridge we passed an area carpeted with the dried remains of pink flannel flowers – it would have been quite a sight a few weeks ago!
At the top of the ridge we also came across a grove of Xanthorrhoea which have also been doing really well after the recent fires.

Continuing out on the ridge, I learnt not to use the bark to differentiate between tea trees (this includes the Melaleuca or paperbark) and Geebungs (Persoonia).  Apparently you can crush up the tea tree leaves for a natural antiseptic (and I think Les told me that you can make up a poultice from trips of bark). You can also eat the fruit from the Geebungs (Les informs me they are identifiable via the small antenna).

It was still relatively early when we arrived at the car, we considered visiting some natural attractions nearby, but in the end called it a day.
I visited a few friends on the way home. 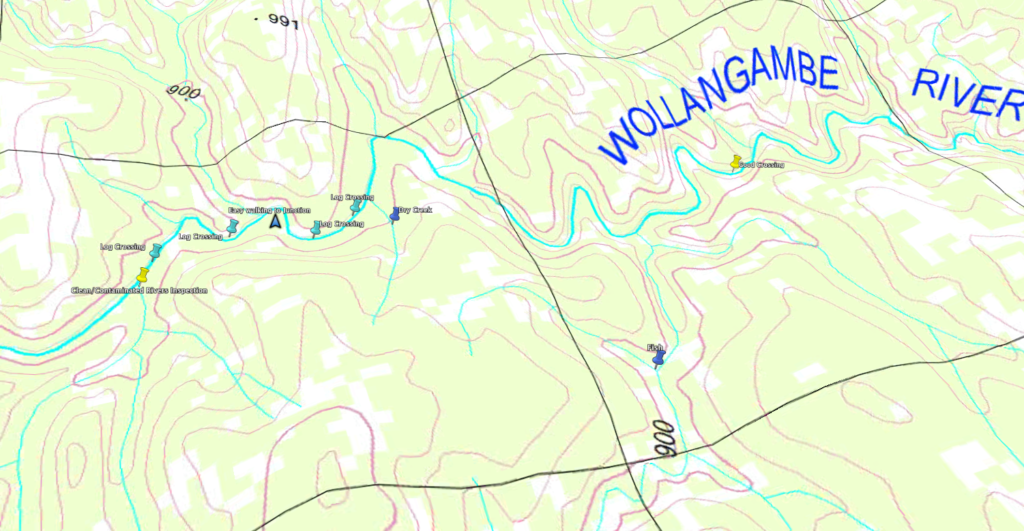 Thanks everyone for a fun weekend!

The EPA have issued Clarence Colliery a new clean up notice. Clean Up Action 2 reads:
The licensee, on receipt of this Clean-Up Notice, must remove accumulated deposits of coal fines within the Wollangambe River where they can be removed by either manual methods as observed by the EPA on 12 August 2015 or the use of a suction pump as observed by the EPA on 17 August 2015, by Tuesday 15 September 2015.

The maximum corporation penalty for not complying with the notice is $1,000,000 and a further $120,000 for each day the offence continues.