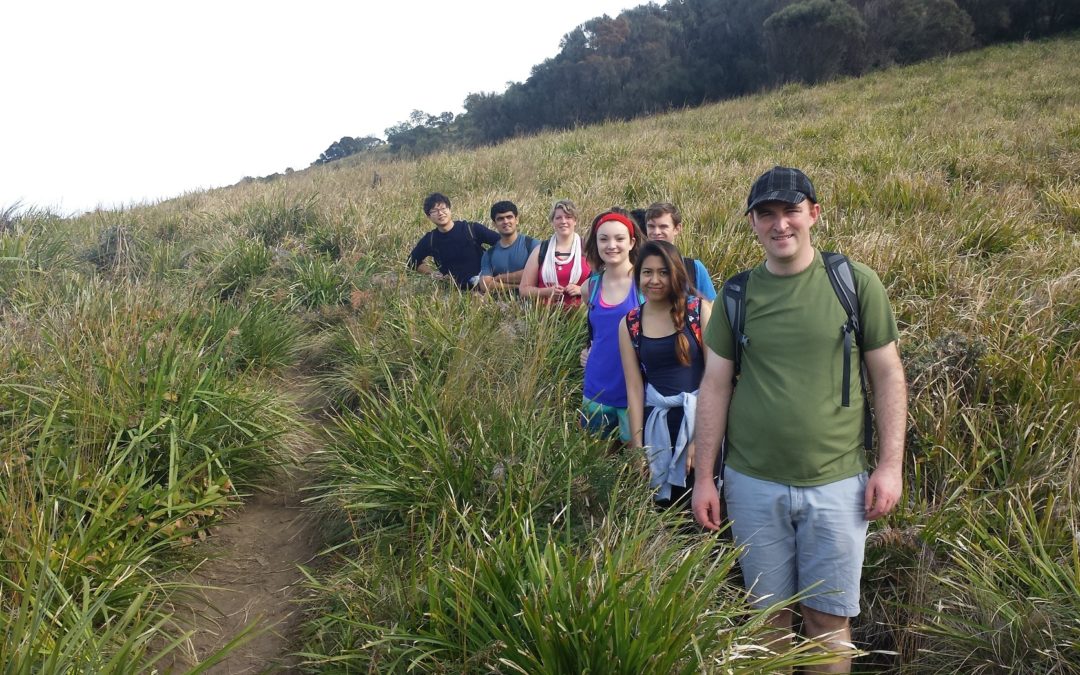 The weather forecast for this day had changed almost hourly, from cloudy to “a few showers”to “morning rain” to “mostly sunny”, so it was hard to know whether to bring sun screen lotion or umbrella. As it turned out is was all of the above; read on.

Most of us met up at Central with Cathie getting on at Sutherland and Josephine and Phil meeting us at Otford Station. Then is was up the short but very steep grade – the steepest of the whole walk – to Lady Wakehurst Drive. It was noted from a distance that the Otford pie shop appeared shut, but decided to check it out more closely on the way back. Then it was a 500m road bash to Otford Lookout, the start of the walk. The view south looked rather hazy and in the further distance light rain could be seen. We could just hope it didn’t move further north to us. The Coast Track starts here and skirts the cliff edge for quite a while. At one point we stopped at a lookout where a tourist kindly took photos of our group. I told the group about Werrong Beach (far below) being a nudist beach, which surprised Alexandra that we have a special isolated beach for this; she said that they were common in Germany.

After a while we reached the junction of the Cliff Tracks and Coast Track, and descended down the Coast Track. It was mostly dry along this section, unusually, which also meant no leeches. We passed through Palm Jungle, then out into the Lomandra and onto the new boardwalk which has recently been built above it to eliminate the progression of erosion on the old track which had become as deep as a WW1 trench. Here we had a break to allow some of our tail end walkers to catch up. Then it was on the last section of the track which goes through the last trench-like section (soon to be bypassed with a boardwalk), and a mini palm jungle before reaching Burning Palms Beach, where we settled down for lunch.

It was just not quite warm enough for a swim on this unusually warm winter’s day, and no one was probably prepared anyway so it didn’t matter. The sun was out also. After lunch we continued along the Coast Track north through the Burning Palms shacks, until reaching the junction of the track to Garawarra Farm. This track then headed on a fairly easy grade until suddenly becoming quite steep, before reaching the Garawarra Farm car park.
Then it was back to Otford via the Cliff Track. The sign said “Otford 8 km” but I am sure it is not that long. Along this section we received our only very light shower, so insignificant it was not worth putting on rain cover. Before long it stopped anyway and the rest of the walk was sunny.

We eventually reached the Otford Lookout again and this time the view was much clearer, being able to see well down the South Coast. Then we walked back to the Otford Pie shop to discover it was still shut, and indeed it was shut for renovations. Let’s hope it is reopened by the time of the next walk there. We went down the very steep track to the station again, and caught the train back to Sydney.

It was a nice walk in good walking weather, and a good introduction for some of our new members who have joined this Second Semester. And, there were no “no shows”. It appears that the message about not doing a “no show” is getting through. Also, I had to put someone on the wait list who had been a “no show” on my Blackheath walk. And as you can see by the numbers attending, a vacancy didn’t eventuate. Also, one person asked to be put on the wait list but when I replied their email bounced (A.H.H.Z it’s you).

As I walked to the station in the morning I was going through my check list mentally, and thought I had everything for the walk, when I suddenly realised – no camera! As the train was due in 3 minutes there was no chance of going back home for it, so the photos you see are from my phone camera.

My next walk will probably be to Mt Wondabyne in 2 week’s time. Keep an eye out for it.