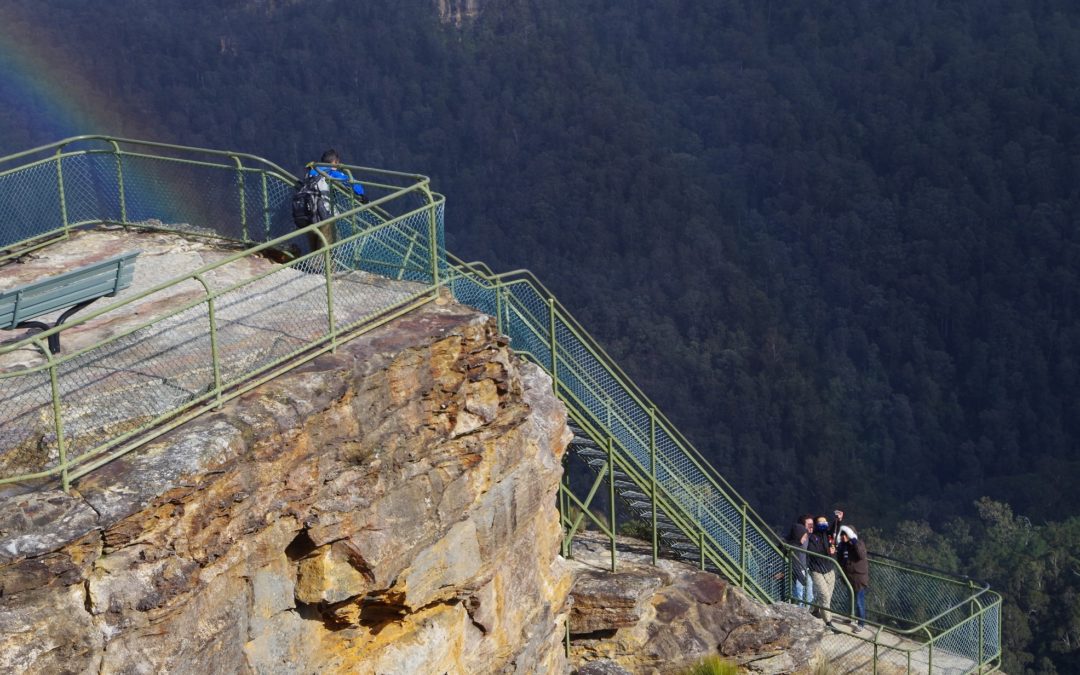 Even so, the weather on departure from Sydney gave little clue as to what to expect; it was cloudy with sunny breaks all the way to Leura. After leaving Katoomba however, we looked out and saw a heavy snow shower over Mount Solitary and the Hampton Ranges, so it gave an idea of what we might expect.

The ride itself was eventful, with an interaction with a Transit Officer who told me that my Opal Card haven’t been validated for this trip. As I had tapped on at Woy Woy I said this couldn’t be so. As it turned out, the Opal Readers at Woy Woy are rather dodgy after hours, and can lead you to think you are tapped on when in fact you are not (I won’t bore you with the full details). The Transit Officer asked me for ID and I showed him my Drivers Licence and he immediately photographed it without my permission. The evoked an immediate response from John, who told the Transit Officer that he couldn’t photograph IDs with asking permission first (and that requirement is stated in the legislation). If you like, have a look at today’s (Thursday) “Sydney Morning Herald” letters section for my comments about this incident.

Anyway, after all that, we got on with the business of the walk.

On arrival at Blackheath Station into a quite strong wind and snow on the ground and station seats (see photo). After a compulsory stop at the loos in the shopping centre (with hot water!), we then set off via Memorial Park to the start of Pope’s Glen walk. On the way we saw some forlorn looking-ducks braving the cold. Pope’s Glen Track goes to the top of Horseshoe Falls and avoids a road bash to Govett’s Leap. It follows a creek through bushland and goes by a nice little waterhole (too shallow for swimming). On the way it was muddy underfoot in some sections, but (to Tony’s relief) no leeches. It started snowing again while we were on this track but as it is in a gully there was little wind.

On reaching the cliff top near Govett’s Leap, we stopped to admire the amazing view which led Charles Darwin to describe it as “stupendous”. Then it was off on the track to Pulpit Rock.

Although it is a tourist track, it has some moderately steep sections and muddy underfoot in some short sections. It is also fairly exposed, and no sooner had we set off then the snow and the strong wind picked up again. It buffeted us on the way around the cliff line. It was however, compensated by the continuous fantastic views of the Grose Valley, occasionally shrouded by a veil of snow falling. Eventually we reached Pulpit Rock which gave extensive views of the Grose Valley and as far as the Wollongambe Wilderness. It was also very windy, blowing Joe’s hat off and almost sending it over the edge. So we took shelter in a little cave below the Lookout. It was out of the wind but in the shade, and John’s thermometer showed the temperature as 4.5 Degrees C and dropping.

Nevertheless, Zeyu, Shaocong and Monica braved the wind and went down to the lower lookout for selfies (see photo). We also saw some rainbows formed by the sun shining through the snow showers. A couple of times the wind was strong enough to need us holding on to handrails to keep steady.

Then we retraced our steps back to the first lookout above Horseshoe Falls, and then continued towards Govett’s Leap. This track is, despite being a “tourist track” is in poor condition and has some “giant steps for mankind” – a challenge for our newer members. As a diversion we went along the Govett’s Leap loop track (which runs below the Lookout itself) and also has a junction with the track down to Junction Rock and eventually Blue Gum Forest – noted for another trip later this year.

On reaching the shops, we went to The Pie Shop on Wentworth Street, making it about 10 minutes before it closed, and having welcome warm pies and coffees. It was here that we encountered the heaviest snow shower yet, which didn’t let up until we arrived at the Station. We had timed it so that we only had a few minutes on the platform to wait for the train in the cold. Then back to Sydney. Tony had gone earlier to find his favourite Fish and Chips shop, which apparently was closed so he caught the earlier train home.

It was an interesting walk (apart from the Transit Officer interaction), and our new members were very happy despite finding it heavy going, as the views more than compensated for this. Also, Monica and Neeti had never seen snow before – ever, and were excited to see it here. It also gave me a chance to try out my new Pentax camera – so if some of the shots are slightly out of focus, that’s why. Also, let me know if some images are too big to load quickly.

Also a lesson: Transit Officers are NOT permitted to take photos of your ID without your permission.

I might mention that we had two outright “no shows” Also, Another person decided not to risk it due to injuring her knee on the previous day’s coast walk, and another had to pull out at the last minute due to concerns about the very cold weather.