Met met quite early in Katoomba and once everyone had arrived pooled into Emma’s ute for the short drive down to Malaita Point. It had been ages since I had done this trip so I literally remembered nothing about the trip apart from the fact it was exposed (someone had bailed last time) and we passed through tourist central on the way to Furber Steps.
Parking proved easy and after a very short walk we where already at the first pitch! The view was spectacular, but the chill in the air meant that we didn’t stick around long. 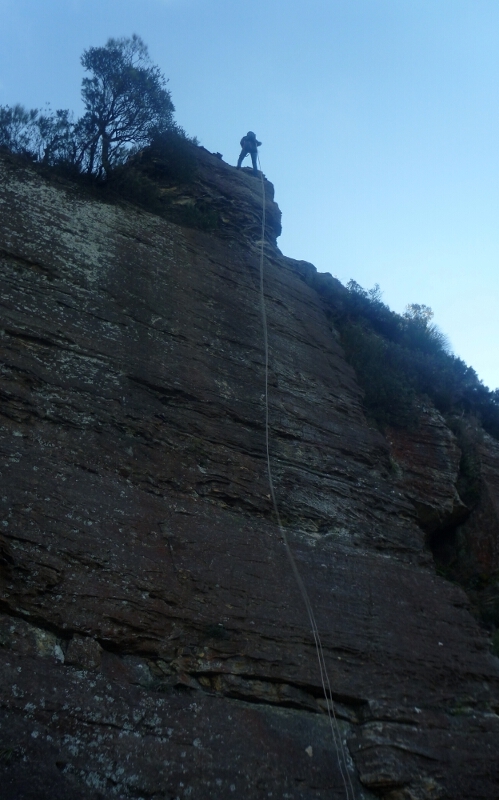 Emma on the first pitch 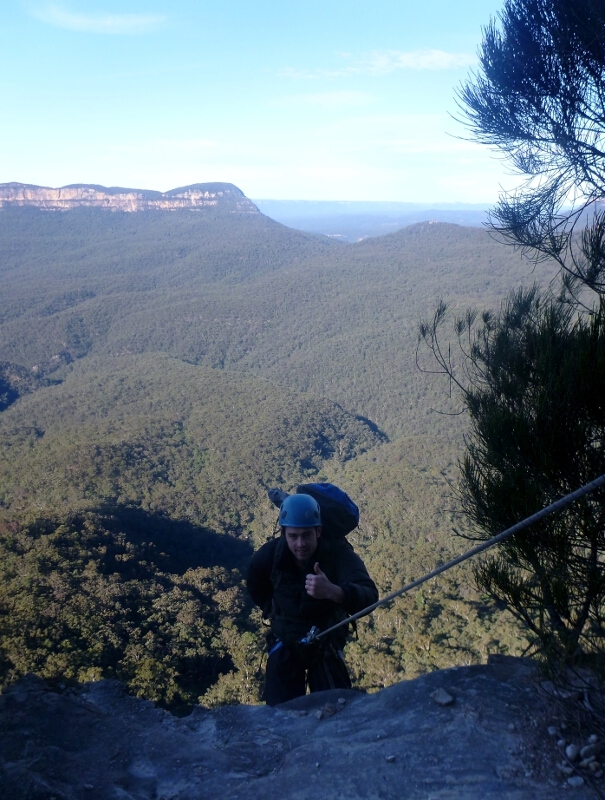 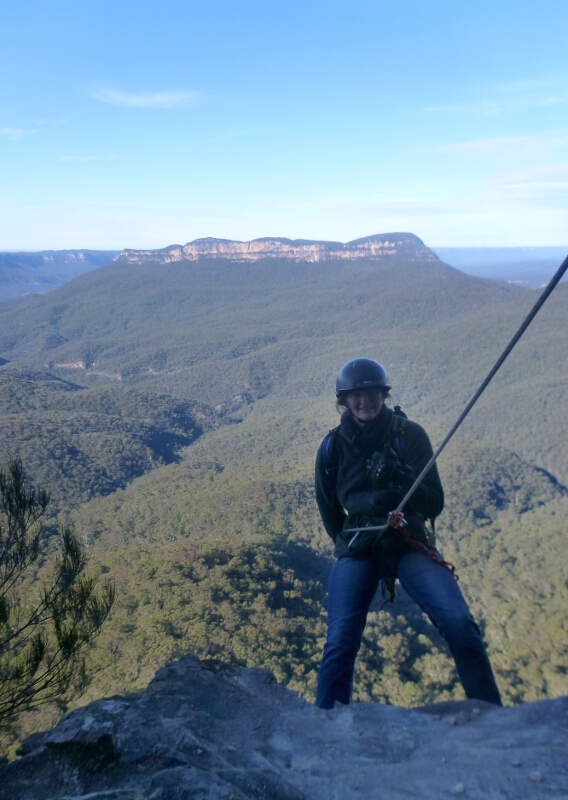 On the way down I thought I’d try abseiling down tandem style with Emma and then my brother. This was the first time I’d done this so we created some rules to follow to ensure we didn’t have any accidents. The first rule was that the person on the ‘safe side’ always started abseiling first, then once the rope was loaded the person on the ‘danger side’ would start and overtake the other person. This procedure was repeated whenever a ledge was encountered. This seemed to work well. (Anyone have thoughts on this?).

Brother in a motorcycle helmet – I found this amusing 🙂 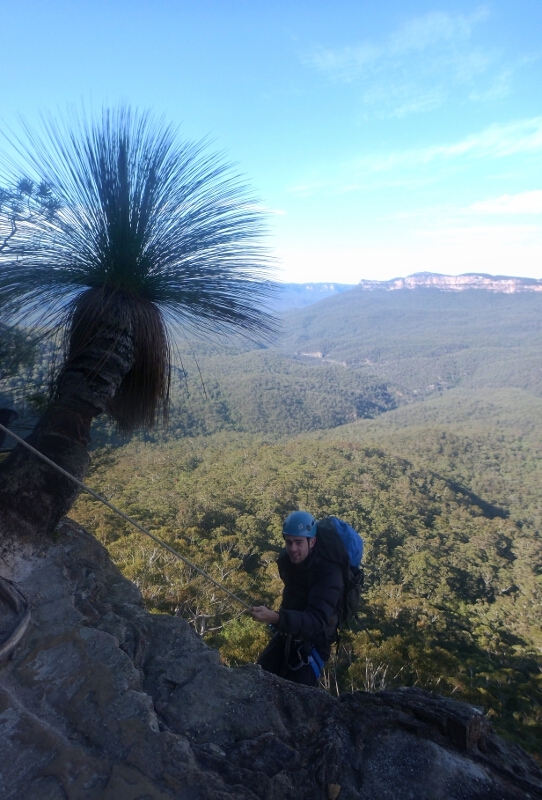 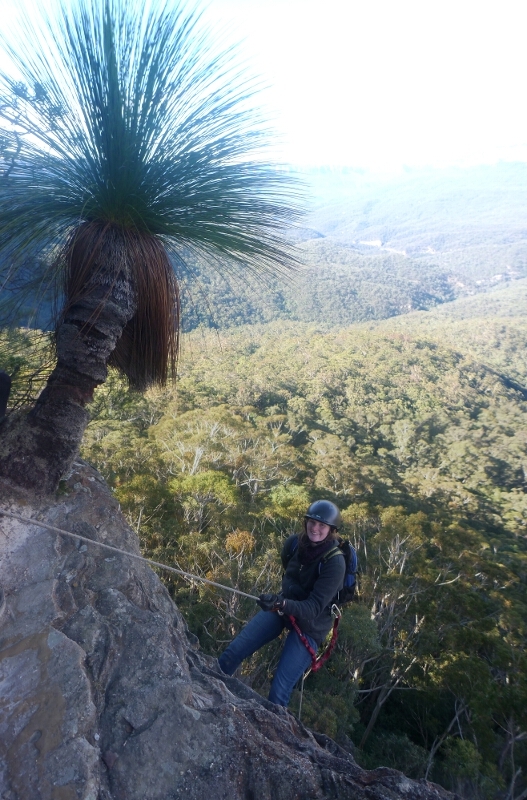 We where in the shade for most of the trip. At the end we had a bit of fun on an overhanging tree that created a bit of a rope swing.

We started walking out around 11 which seemed like the peak tourist time. After swimming through a sea of people we began the ascent up Furber Steps.
Somehow Tom and I managed to miss the turn off to Scenic World and instead ended up at Kamillaroi Rd… we didn’t realise what had happened and waited for the others for some time before we worked out what had happened.

After some snacks in Katoomba, I headed out with my friend Michael to the top of Malaita Wall. I wanted to do the first pitch so I knew what to expect for tomorrow (heard it had some narrow ledges). I descended most of the first pitch before I had to abseil over a knot… it looks like the ropes I had (40m) where a little short! I thought I would practice passing the knot with out my prusiks, but in the end I stuffed this up and resorted to using a prusik loop.
The ledge was much bigger than I had expected and there would be plenty of room for the entire group. I ended up having to abseil the top of the next pitch too (due to dropping a prusik – woops!).

After kicking a soccer ball around in Wentworth Falls I headed to Katoomba. We met in the same place as the day before (except Elizabeth, who was cycling down). I later realised that no-one else was from yesterdays trip. I thought we would be a smaller group, but Tim and Belinda, ended up changing trips and joining the group. We met Tom returning from his trip to Mt Solitary before starting the trip. Kosta rigged the first pitch, and I descended first escaping some small complications. 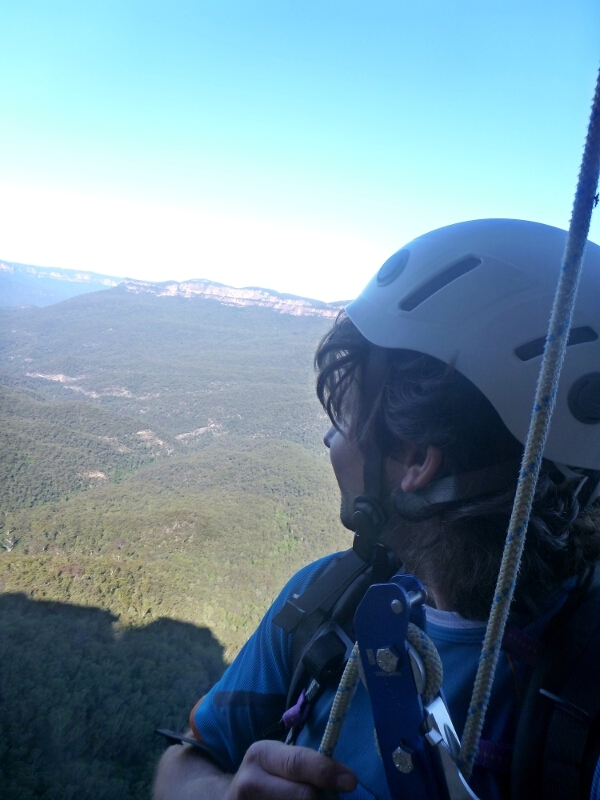 The first pitch: me enjoying the view and Stop’s auto-lock.

I later heard that there was an issue with Tim’s rack descender. The different diameter ropes meant that one had more friction that the other and was causing the rope to move through the anchor. Another thing was that unlike the Sat, not everyone was comfortable abseiling single rope (something to consider for future trips). 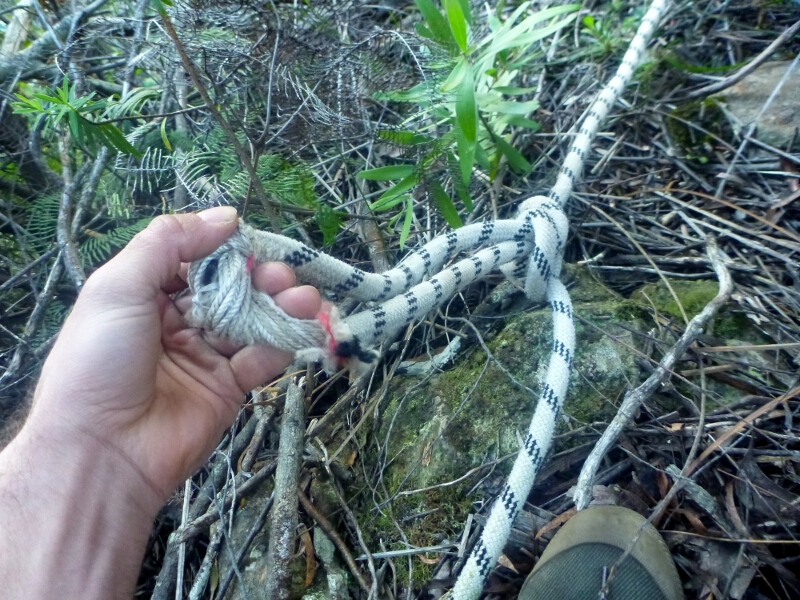 One of the anchors was a bit of a mess compared to the others. David and I reset one of the ropes on this which had frayed on a rock. We isolated the fraying with a Butterfly, and left the rope with a bit more slack so it should wear less.

It wasn’t long before we where at the bottom and soon converged with the press of people on the board walk.

We regrouped at Station Bar for some drinks and Pizza.

Thanks to everyone for a fun weekend!