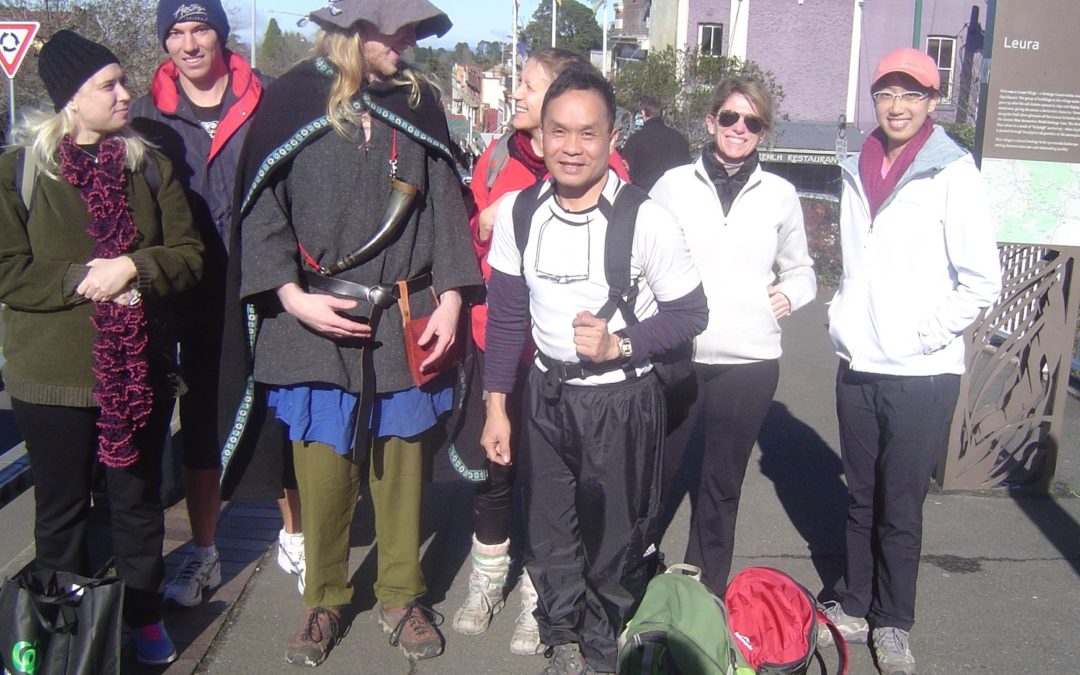 Hoping to get 13 people (since it was a Wicked Witch walk) 12 signed up but at the start we only had 8; two absolute “no shows”, and two others (more about that at the end).

Most of us met up at Central Station and set off on the train to Leura. At Leura we met Owen who had dressed up as a wizard (or was it Gandalf? See for yourself). It was pleasing to see that the clouds threatening rain in Sydney had disappeared to a clear but quite cold day.

After the usual loo stop at Leura shops, we stopped at the pie shop for some extras and then set off for Leura Oval and the start of the Lyrebird Dell track. This track is over 100 years old and looks like it hasn’t been upgraded since it was built – it is in fairly poor condition. Still, not a problem fro us of SUBW!

Eventually we arrived at the Pool of Siloam, a good swimming spot on a hot summer’s day, but not today! After a photostop there, it was then via the seemingly never-ending steps top Gordon Falls picnic area and then down to Gordon Falls lookout. This lookout gives superb views over the Jamieson Valley and Mt Gibraltar at Bowral could be seen in the far distance.

After a break and a chat we then proceeded along Cliff Walk, with more great views, and we were at last able to cross over the not-now-dangerous bridge, fixed by the Blue Mountains City Council. Thus the detour past the home of the parents of a World-famous bushwalker was no longer needed.

After another stop at Elysian Rock we continued on to the track leading down to Leura Cascades. It also takes walkers to the top of Leura Falls. Tony looked down and wondered if it was possible to get down there. He soon found out!

The Cascades Track reached the junction with Federal Pass and rapidly dropped down by a series of steel steps (almost steep enough to be ladders) and then to the base of the Falls.

Then we continued on down past Marguerite Falls and Lila Falls (see photos) as we went deeper into the damp dark semi-canyon of Linda Creek. I gave the warning that we were entering Leech territory. Shortly we reached a short by-pass track which offered a dry lunch spot with a view of the cliff face and the sound of the nearby creek, but without leeches.

So we settled into our lunch break, and then continued along Federal Pass until reaching Leura Forest Picnic area. Although it has seats and tables it also has leeches. Every now and then Tony would make a little detour to look at something that caught his attention, but a call of “Tony – Leeches” would quickly bring him back to the group.

The junction with Dardanelles Pass is located at Leura Forest picnic area and is not well signposted, with one exception; there is a sign stating that the Giant Stairway is closed and the next exit is Furber’s Steps or the Scenic Railway. Since we intended to go up via Furber’s Steps than didn’t worry us.

So off we went along Dardanelles Pass, and after about 10 minutes I spotted a male Lyrebird with full tail cross the track. I managed to get a photo of him in the undergrowth but you will need to look carefully, the bird is so well camouflaged.

Eventually we reached the bottom of the Giant Stairway with its “closed” sign and had a break. A search of socks and feet revealed no leeches, so my decision to keep moving through Leura Forest had paid off. The sign at the Stairway said “Furber’s Steps 1 and a half hours. I said, no way, we could do it in 40 minutes, and so it proved.

Then it was the steep climb up Furber’s Steps, the second steepest in the Mountains (Giant’s Stairway being the steepest although there is also a claim for Pierce’s Pass to be just as steep).

The fit Menghan ran ahead of us as she needed to visit Scenic World at the top (guess why), while the rest of us ended up at the Kiosk at the top of the Steps. But before getting to the top, some of us had to wait at the very steep “single track” section of the Steps while a party of 50 high school students from Boston Massachusetts came down the steps.

As there was an unscheduled separation of Menghan from us I advised her to get the 686 bus back to Katoomba Station from Scenic World and we would meet up. Meanwhile Owen had left us to meet up with friends, and the remaining 6 walked to Katoomba shops where we came across all the various stalls and street artists.

Here we agreed that now we could go our own ways to look at whatever took our fancy. Katherine Matthew Tony and Maria checked out a fire-eater, while Cathie and myself went up the hill to find a coffee stal, run by a friend from work. After a nice warm coffee we went to the station with only a five minute wait for the next train. By chance Tony found us on the train and we stayed together for the trip back to Sydney (or Strathfield in my case).

It was an interesting walk in very nice if crispy cool weather to celebrate the shortest (minus one) day of the year.