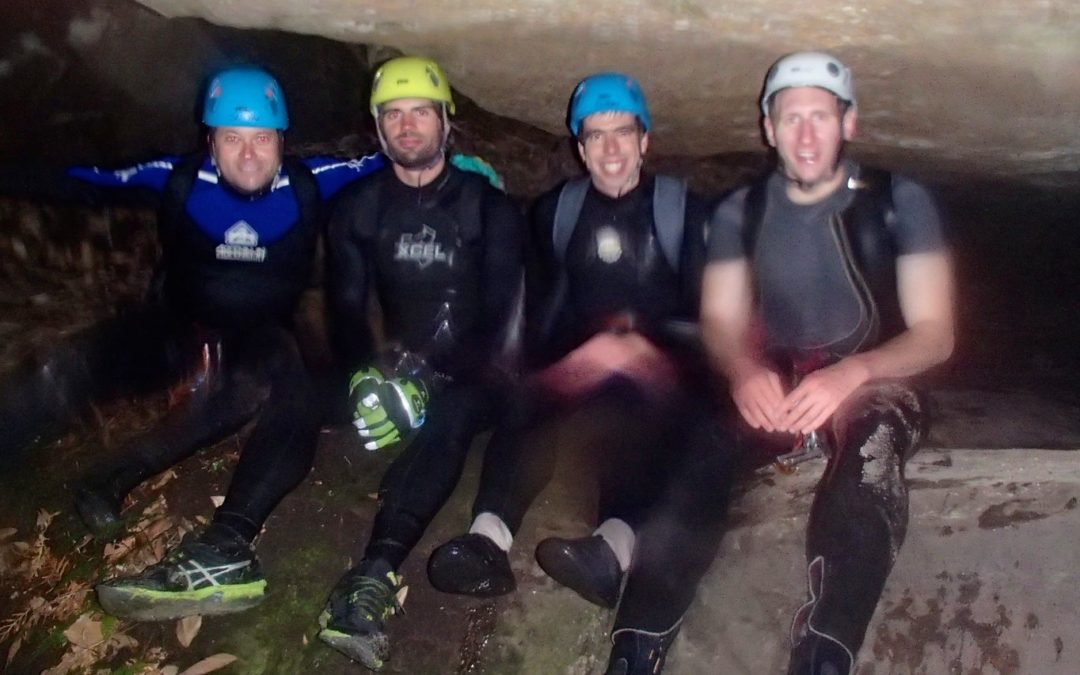 Koombanda Canyon runs from Bells Line of Road down to an abandoned mine, from where an old road leads up the Darling Causeway. Effectively, the trip cuts the corner between the two roads. We met at Bell on a cold Saturday morning on the weekend of the winter solstice, did a car shuffle and headed off into the bush at 8.30. It was already warming up from the 2°C that greeted us on our arrival, and the sky soon turned blue to give us an ideal winter day.

Twenty minutes or so brought us down to a small side-creek ending in a waterfall abseil of perhaps ten meters into the Koombanda creek itself. At this point we changed into wetsuits. Five of us had our own, but Tim B had the best the club gear locker could offer in his size – an old sleeveless with a ripped crotch and a broken zip. He was going to be cold!

The abseil brought us down into a creek bed that definitely promised a canyon ahead, but at this point is scrubby and blocked by many small fallen trees. We were glad when we got to the beginning of the canyon section. We were also surprised by how little water was running down the creek despite several days of rain. The creek must have almost no catchment.

There is an abseil anchor before the first swim, but it was easier to scramble down. A pleasant canyon section follows, with some easy climb-downs before the second abseil, from a high anchor into a ‘keyhole’ section of canyon. Leo scrambled up to the high anchor, making his abseil about fifteen metres, while the rest of us abseiled from the bed of the canyon. There is a wade inside the keyhole, followed by a decent section of constriction including an excellent water jump. Shortly after this the canyon section ends.

From here on the creek is again exceedingly scrubby. Tim F led us up to the left-hand cliffline in the hope of getting out of the tangle of fallen branches and occasional vine, but after a couple of hundred metres we were getting too high above the creek, so we slid and scrambled back down the muddy slope to the water. This would definitely be a better canyon in summer, to avoid ripped and mud-caked wetsuits.

Fortunately it is not very far to the old mine. By this stage some of us were well up on the right bank trying to keep out of the vegetation – a mistake, as this bank ends abruptly at a nearly vertical road cutting! Following the creek itself brings you to a concrete bridge which is part of the old mine site. We arrived at the bridge at 11.30, and stripped off our wetsuits in preparation for the walk back up the road.

There was a warning sign at the mine – steep slopes! – with a pictogram of someone tumbling to their death in a shower of rocks. If we had been aware of such dangers we would never have ventured down here, naturally.

The route back to the Darling Causeway is on the old road, with excellent views into the Grose valley. At one point the road has collapsed leaving only a narrow ledge which leads to an iron spike driven into the rock as a step. This gave us some idea of the work that must have gone into original road construction.

Your correspondent had to rush back to Sydney at this point, leaving Leo and the others to spend the afternoon exploring the canyon potential of the next gully along.  Koombanda has a decent canyon section and great access at both ends, but the scrubby creek walking means that it’s probably better for summer when it can be done without wetsuits.