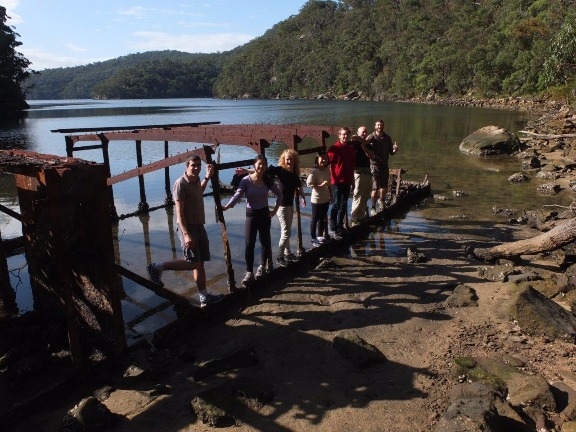 Most of us met at Strathfield for the train up to Berowra, Luigi and Sarah joined the train later on and met us when we got off at Berowra. Heading over the highway and down the track we soon forgot how close we were to civilisation. The rain from the previous day had been replaced by a beautiful bright sky with only the odd cloud drifting through and most of us shed our jackets at some point or another as we followed the zigzagging track down to Cowan Creek. We paused for a brief snack at the rusted frame of an old boat before following the track along Cowan Creek.

The path is well defined and doesn’t intersect or branch off into other paths that I can remember which meant navigation was no problem at all. Crossing over a small creek off one of the little bays we met a young lace monitor who clearly would have liked the whether to have been a little warmer. He tolerated the intrusion and a few photos and then we moved on, thankful to be endothermic. 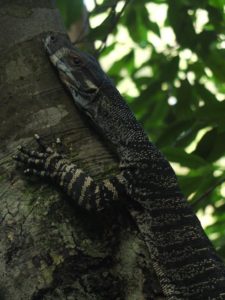 Reaching a fallen tree Anh-Thu showed us that bushwalking is easy if you happen to be small enough to fit under rather than clambering over. Emma had also clearly been paying attention during the Koala spotting seminar the previous night and was able to identify the tree as a grey gum. While it hadn’t been mentioned in the seminar however, we were all in agreement that Koalas prefer their trees to be vertical so we didn’t waste too much time examining the branches of that particular grey gum.

We stopped for lunch at apple tree bay where we enjoyed the sunshine, the open space and the view of the water. There was a small kiosk where Johannes bought a very interesting, multi-coloured, swirly ice-block (apparently cold pies aren’t the most appetising meal to take on a bushwalk). As he sat in the sun eating his ice-block he wondered aloud why people think bushwalking is so hard. Luigi and Sarah had a little more excitement preparing their sandwiches when a kookaburra flew in and snatched some ham (I think he’s done that before!). On the whole though you’d be hard pressed to find a more pleasant place to eat your Saturday lunch. 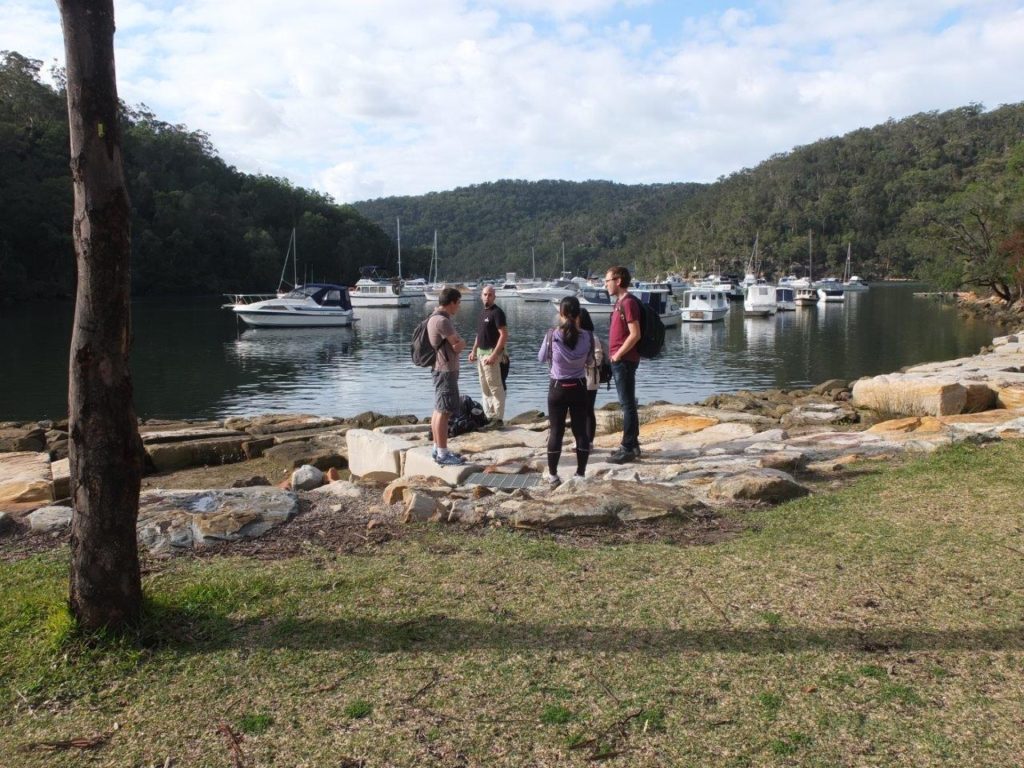 Luke Sinclair had let a few Kiwi-isms slip through the day but made up for it after lunch by bringing out a bar of Vegimite chocolate. Amused, curious, and slightly concerned each of us hesitantly tried some (I’d tell you what it was like but maybe I’ll just suggest that you sign up to Luke’s next trip on the 06/06 and hope he brings along another block).

After doing some fish-watching we set off on the way home. Walking up the hill we heard a number of various birdcalls coming from a spot nearby and stopped to listen to a lyrebird doing his routine. A short climb further up gave us some more fantastic views of the creek and surrounding hills, and then finally we found ourselves at Mt-Kuring-gai station ready for the train home.

All in all it was a great way to spend a Saturday, and I look forward to getting out again some time soon.