The trip began with a crazy morning 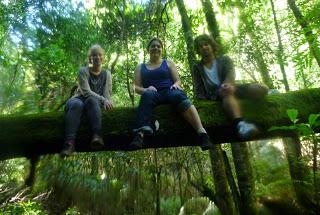 The trip began with a crazy morning… After picking Lauren up from the station we actually ended up playing a few rounds of cards before everyone was ready to commence with some walking.

Before doing the planned loop around Centennial Glen, we explored a small track on the way down into the Megalong. It was pleasant walking beside a clear stream winding its way through the temperate rainforest. We met a couple who where photographing the numerous fungi growing on the forest floor and trees. Walking back along the road we collected a bag of rubbish people had discarded from their windows.

That was enough walking for most of the group who headed home to enjoy some tasty food. And after exploring a small grotto it was only Lauren and I remaining for the main walk.

There was some track repairs underway which prevented us from walking along one section of the track, so we pretty much went straight down Centennial Glen, taking our shoes of to get to the bottom of a small waterfall.

The wind was cold as we headed along Colliers Causeway but there where still a number of rock climbers out scaling the cliffs.I am unsure of the history for this spot but at the bottom of Porters Pass we found what looked like a water trough carved into the base of a series of small falls. My guess is that it would be linked to mining (Centennial Glen and Porters Pass Blackheath, Blue Mountains by Keith Painter would probably offer some insight into this). We scrambled along an exposed ledge to reach a spot protected from the wind. Eating some lunch here we watched a pair of climbers work their way up a route.

After a pleasant rest, we continued up and soon reached the road. With some uncertainty we followed a couple of these managing with little difficulty to locate the track that would complete the loop via Fort Rock. However after some great views out into the Kanimbla Valley I think the track we took actually managed to bypass Fort Rock! We made our way back to the train station, timing it really well with a train back to Sydney.