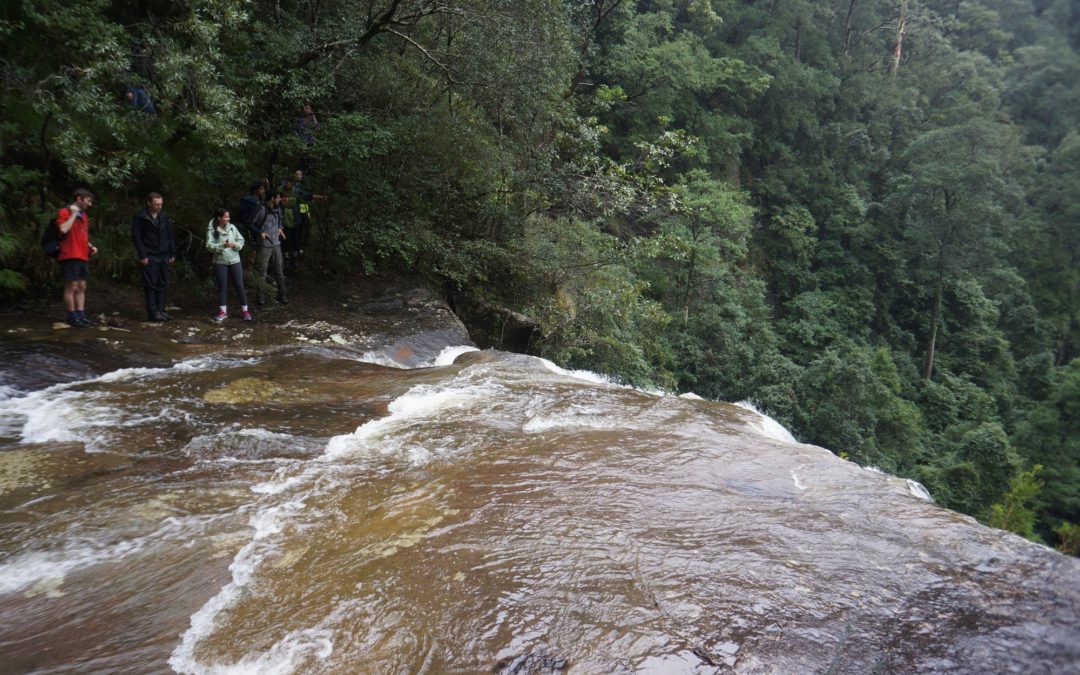 Despite a dodgy weather forecast we ended up with a group of ten people, neatly fitting into two cars. In my car we had people from five countries and four continents, which lead to some interesting discoveries (did you know that Brazilian soap operas are popular in Mongolia?).

The two parties met at the Conservation Hut in Wentworth Falls and we set off on the trail at 10.15am. Fog obscured the view from Empress Lookout, but we could certainly hear the waterfall -I called it an acoustic lookout (hearout?). The view from the bottom of Empress Falls was excellent, there was far more water flowing than I’ve seen before (definitely not a good day for canyoning!). We followed the track down past waterfall after waterfall, deeper and deeper into the valley. Finally we had to cross the creek, and fortunately it turned out to be a fairly easy wade and rock-hop. Further down the valley the second creek crossing proved to be much easier, with a series of large rocks providing an entirely dry route across.

We passed two people coming up the Vera Falls track but otherwise didn’t see any other walkers until we were back out at Lower Wentworth Falls. The Vera Falls track is well maintained and easy to follow, and within no time we were standing at the top of the falls. This is a great lunch spot when there’s not too much water flowing, but it was totally flooded so we decided to continue down to the base of the falls. Here we found a little cave right next to the falls, which I christened it Lunch Cave. It didn’t take long to learn the true name: Leech Cave. We all had several of the little blighters nibbling at our ankles.

We followed Valley of the Waters creek down to the junction with Jamison creek, which marked the mid-point of the walk and the transition from walking downhill to uphill. From here we followed the Hippocrene Track, which is quite rough but there are ribbons and tree markings to guide the way. We took a few wrong turns but it was never difficult to find the path again. There were mushrooms and fungi of all shapes and sizes, some of which looked quite delicious.

On several occasions we tried to stop for a rest but were always beset with leeches. We battled valiantly but in the end had to admit defeat and I called for a parley with the Leech King. After a long negotiation we were offered safe passage in return for 10kg of morcela and a promise to advocate the reintroduction of leeches for medicine (apparently the Leech Kingdom suffers from an extremely high unemployment rate).

Further up the track we stopped for a brief look at Hippocrene Falls, which is nice but less impressive than many of the earlier falls we’d seen. Yet more steep walking brought us up onto the Wentworth Pass track at Lower Wentworth Falls, which was thundering down magnificently. We saw two people wearing jeans and carrying umbrellas, so knew we couldn’t be too far from civilization. I took about half of the group on a wet and slippery track behind the waterfalls, which was great fun. After a quick rest and some morale-boosting ginger cake we headed up a series of ladders called the Slack Stairs, which brought us to the National Pass. The best view of the full height of Wentworth Falls is at the top of the Slack Stairs, but unfortunately the top was slightly hidden by fog.

Upper Wentworth Falls is often just a wispy little dribble but today it was a real powerhouse. We stopped for a group photo and then proceeded up the Grand Stairway, which is apparently the tallest outdoor staircase in Australia. At the top of the staircase we stopped for a snack break and a final assault on the leeches. Once we reached the car park the fog had cleared, giving us a lovely view of Mt Solitary and the Jamison Valley.

We took the Short Cut track back to the Conservation Hut, arriving back at our cars at 16.15; a round trip time of 6hrs. This was a lot quicker than I had expected with such a big group, but we would have been considerably slower without the… motivation of the leeches. I was very impressed with the group, everyone kept up and completed a tough walk without a whisper of complaint. All in all it was a really enjoyable day with some spectacular waterfalls and a challenging but satisfying climb out. Thanks to everyone that came!