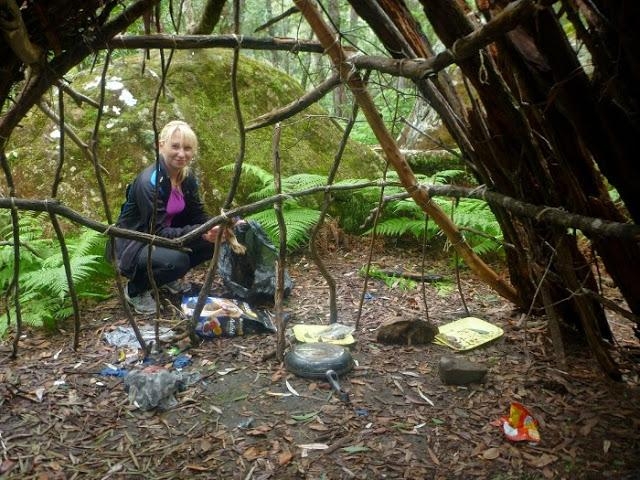 It was definitely cold when we got out of the cars at Blackheath Station. I thought it strange that no one was waiting for us… I checked my mobile and it turned out that Ruby was still 40mins away… apparently I can’t read the time and David and I had left nearly an hour early! We kept ourselves busy, checking oil levels, refilling wiper water, putting my left indicator back in (it must have fallen out the day before). Before I knew it the train had arrived, and after fetching Wanlu and Gesine from the service station we where on our way. (We where also supposed to have a Charlie, but he had missed a train connection – hopefully we would meet at Govetts Leap).

As we drove down Evans Lookout Rd it was amazing to see the snow-like piles of hail that carpeted sections on the side of the road. After a brief visit to the Valley View lookout, we started out along the Cliff Top Track. The track was quite slushy and I think most people got their feet a bit wet by the time we crossed over Govetts Leap.

With a final stop at the public toilets, we began our descent to the bottom of the falls that we had just crossed at the top of the cliffline. The way down wasn’t quite as steep as my younger-self seemed to recall, but it was great walking and the temperature was quite nice once you got moving.

We followed the gully down and after several creek crossings soon gave up keeping dry feet. Given the recent rainfall, the waterfalls where pumping and there where lots of pretty feeder streams you wouldn’t normally see.

Everyone was ready for lunch when we reached Junction Rock; we climbed up onto it (avoiding the crossings) and shared some food (including half a watermelon and rockmelon!). I think it was some threatening drops that resolved us to get moving a bit quicker than we may have liked.

It wasn’t far to the rubbish site that had led me to organise this trip. It was still all there, strewn about a small structure. We got out our garbage bags and began picking stuff up. Someone brought up concerns about the morality of taking some pots and a fly… however it looked like they had been there quite a while so I took them anyway, but the positive feeling of cleaning up was now tainted by this darker thought (we did leave a stash that was concealed in some rocks).

On a side note, building a structure in a National Parks is something that is frowned upon – in fact some one has told me that this particular one has been reported at least twice. I also heard about a stone building that was dismantled on the Wild Dogs; it is interesting that a two(?) week eviction notice had to be served first.

The act of cleaning up more permanent sites is an interesting discussion. I’m not entirely sure where I stand.

(Whilst we where cleaning, we encountered guy with a dog – not on a leash. His response to having a dog in a national park was that he had a permit – I hadn’t heard of that before. Does anyone know anything about this??)

Gesine collecting rubbish strewn around a small structure. With packs significantly heavier we continued up Rodriguez Pass, having to find an alternate
crossing over Greaves Creek before taking a rest at the base of Beauchamp Falls (also had a couple of quick water slides – pretty cold!).

We continued up deciding not to visit the Grand Canyon. On the way out I noticed that one of the two ‘sentinel trees’ trees that you walk through had fallen. I thought it ironic that just last weekend Martin had commented that these where his two favourite trees on the walk!

The stepping stones weren’t much use!We squished back in the car and headed back to Sydney, most of us talking the train. (We didn’t meet Charlie, but he apparently did the walk from Govett’s Leap! Maybe he left before us? as we didn’t see him and he finished before us.)